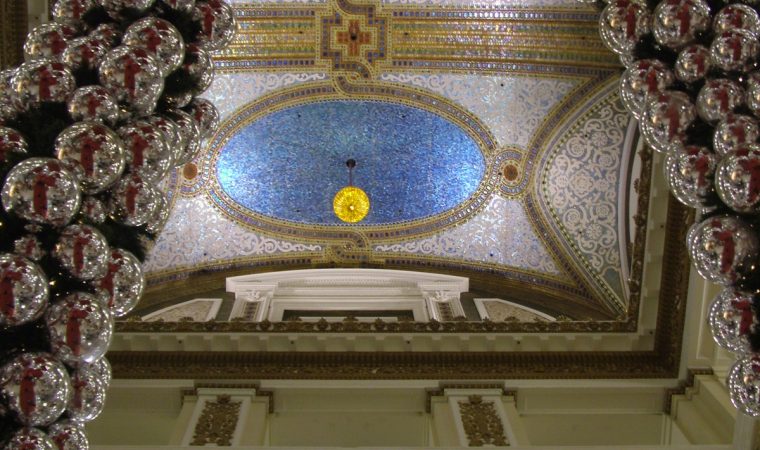 The news hit Chicago today that Marshall Field’s will become Macy’s, ending a 130-year old flagship department store name on State Street. Chicago newspapers and Chicagoans are handwringing and preparing CEO Lundgren’s exit papers, and there is plenty of reason to doubt Federated’s wisdom – after all, this is the world’s test market and the only place that has an American Girl store. Yo, Lundgren, you are giving us a New York City name. I love NY as much as anyone, but I can recall a singer at Blues Fest being booed for singing “New York, New York.”

But from a landmark perspective, we are ready – the city already began landmarking Field’s State Street complex, a collection of buildings from 1894-1914 that fill a whole city block, insuring that the trademark clocks and perhaps even the Marshall Field’s nameplates, will remain. Ditto the stained glass and mosaic domes inside.
The new owner got Hizzoner Mayor Daley to go along by promising to bring back Frango mint production to Chicago – the 1999 event by another goofball CEO that caused me to shred my credit card and take my business to Carson’s. I wonder if they will put it back upstairs? That was cool – making chocolates on the upper floors of the State Street store. Of course, Frango’s themselves were the result of a 1929 buyout of another retailer.

Yes, preservation can only keep physical things, like buildings, not businesses or people. Which is good, because buildings are reasonably sturdy and reliable.

I thought Field’s was on to something a year ago with huge video ad screens behind the windows on Washington Street – we need more of that Asian city video building action, but then it went away, another bold move gone awry in the layers of MBA bureaucracy.

Speaking of Macy’s, you know they filmed the 1990s remake of Miracle on 34th Street in Chicago? In SAIC’s own Maclean Building on Michigan Avenue? Beau O’Reilly (prior to his SAIC gig) was walking by the cameras and lights and trailers and an older woman asked him what they were filming. He said “Miracle on 34th Street”. and she said “The original?”

Thanks for the story, Beau.