February 28, 2006 Interpretation, Vision and Style Comments Off on Modern preservation 909 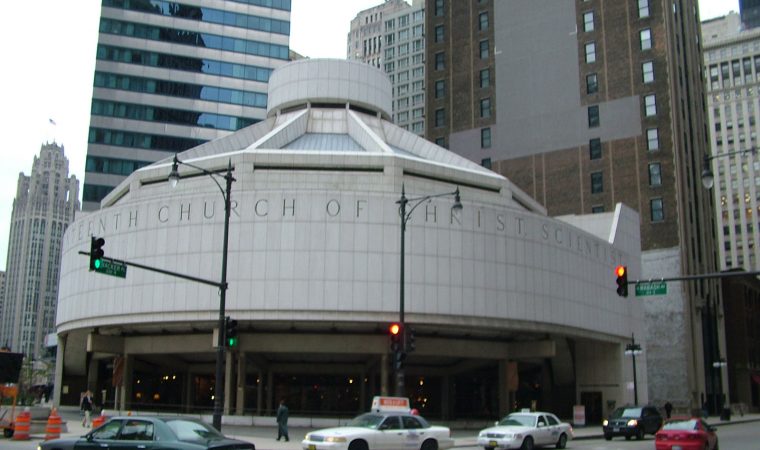 A developers proposal to demolish 17th Church of Christ Scientist (boo!) was leaked by Phil Krone.

Last week I read about the decay and demolition of hundreds of modernist landmarks in Moscow (boo!).

17th Church of Christ Scientist was built in 1968 by noted Chicago architect and preservationist Harry Weese. It is a flying saucer of High Modern delights, a washer and nut bolting down the bend in the river where Wacker Drive turns sharply toward the Michigan Avenue bridge. The quarter-round plan was innovative (although if I were a persnickety architectural historian I would point out a precedent published in Liturgical Arts in 1942) and the result was a building that is interesting in and of itself and also urbanistic, making its surroundings more interesting. So far the congregation have resisted the developer’s advances, but you never know – every church has its price.

More distressing is the fate of the Melnikhov house in Moscow, those concrete cylinders with hexagonal windows that stick in my memories of architectural history – where did these come from? No precedents, no followers, sort of like Bruce Goff buildings – . It seems the Moscow mayor has been doing a lot of demolition by neglect, letting them flake and fail and then demolishing them even if they are landmarks. He’s not just picking on these modernist treasures – he’s sacked a few Deco and Stalinist Classical landmarks as well.

There is a lot if interest in preserving modern buildings lately – New York went agog over the Huntington Hartford museum at 2 Columbus Circle, trying to save a building that was critically body-slammed when built in 1962. In 1988 DOCOMOMO started in Holland to save landmarks of the Modern Movement and ten years ago we had the first Preserving the Recent Past conference in Chicago, which has led to the formation of several groups dedicated to modernist preservation.

There is a physical problem too, one that is rarely talked about because it counters our intuitive understanding of progress. Post-World War II buildings may be built poorly due to several paradigm shifts in architecture and building. The Depression and World War II caused a break in material and construction knowledge. This breach was filled by science, so no longer was steel made by a guy who just “knew” when he had enough limestone and coke. Carpenters didn’t need to know their grains so well, and materials took a nose dive so there weren’t so many grains to worry about. New precision engineering meant buildings could be built to last not one day longer than the mortgage. You could probably add ten stories to a five-story 1870s building – they were “overbuilt.” You can’t even add one story to a one-story 1970s building. And polymers and plastics gave us buildings which are really just frameworks for an endless supply of sealants.

Modern also had several aesthetic attributes that complicate maintenance and repair. The continuous surface – very space-time, very cool, but impractical to maintain. Better brick pavers and shingles that can be replaced one by one as needed.

So, there are impediments to preserving Modern but that is no excuse for Moscow – political will sits on a separate plane from the fiscal and the physical.