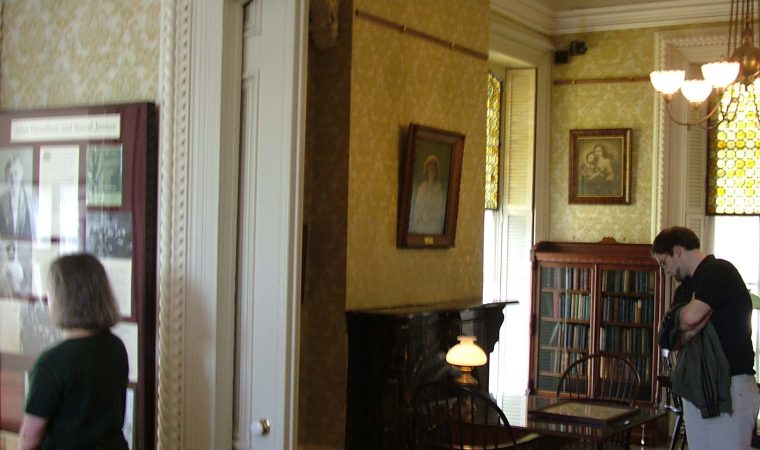 This week I am participating in a meeting at Jane Addams’ Hull House Museum at the University of Illinois at Chicago, to determine how the site should be interpreted in the future.

In the 1960s, when they built the University, Hull House, founded by Addams in 1889, was to be another casualty of the clear-cut neighborhood, but then Senator Paul Douglas (the guy who saved the Indiana Dunes) pushed to save Hull House as a memorial to Addams’ pioneering social work. Douglas had been a Hull House resident. The House was saved, along with a Dining Hall, but the rest of the 13-building Hull House complex was demolished.

The restoration was comical by current standards. The house was restored to 1856 in a format Addams never witnessed. Plus, it was all wrong. When you stand in front of Hull House today, you see no original fabric – none. Both buildings were encased in a new skin of brick in 1965, the house was given a roof it never had, and the Dining Hall’s original stucco upper story vanished. I traced the history of the 13-building complex – primarily constructed during Hull House’s first 20 years – in a web paper three years ago, which you can see at http://www.uic.edu/jaddams/hull/urbanexp/geography/groundplans.htm and http://tigger.uic.edu/htbin/cgiwrap/bin/urbanexp/main.cgi?file=new/show_doc.ptt&doc=834&chap=32

Even the history of Hull House is tricky, because the settlement house idea of saving the inner-city poor by having well-educated people move into the neighborhood suggests patronizing paternalism. The “residents” of Hull House were not the inner-city poor but reasonably wealthy educated people like Paul Douglas, and the purpose of the settlement house, like the Peace Corps, included both the helper and the helpee. Jane Addams even said it was more about the helper than the urban poor.

There is nothing wrong with this, as long as it isn’t mistaken for pure altruism. Hull House did a ton of good and still does – in fact it did most of its good by the simple fact that the educated middle class lived near the immigrant poor – and each learned something about the other.

One of the interesting things that came up in our discussion was the context of then and context of now. In 1895 Hull House published the Hull House Maps and Papers, with incredibly detailed house-by-house color-coded maps to indicate ethnicity, income, housing conditions, and so forth. We all commented on how the maps used categories we find strange today, but then we recalled the context of 1895, when most people would lump all the residents of the area in the same “they wouldn’t bathe their babies if you gave them clean water” category. Hull House gave them clean water, and they bathed their babies. And then Hull House residents went on to get clean water for everyone.

That was how Hull House worked. They built a playground in the 1890s. Everyone who could used it, and within the decade they were building playgrounds all over the city and by 1907 the Playground Association of America was meeting in Chicago, welcomed by President Theodore Roosevelt. They did similar things for child labor, occupational safety and public health. The Dining Hall is an American Chemical Landmark for the pioneering work done by Dr. Alice Hamilton at Hull House.

But our charge was the buildings. The house interior has many original features like fireplaces and molding, but it also has some horrific wallpaper and windows, an unpleasant glimpse at the aesthetic taste of 1965.

In fact, Bob Bruegmann and I noted that the interior speaks an idiom we all know – the house museum – which detracts from the real historical message and significance of Hull House. The group agreed unanimously that it should not be a house museum but a museum in a house. The wallpaper should go. Mess with our expectations, please.

We talked about putting figures behind the windows, films behind the windows, peeling back wall bits to see beneath – introducing high tech furniture to get rid of that stuffy house museum feeling and engage the visitors in the important story, which has little to do with the architecture of this old house, which is ersatz anyway.

The interpretation that Rima Schultz and Peg Strobel and Dan Portincaso put together is quite excellent – it follows the basic themes of labor, immigration and children in the context of democracy and reform. And it is a nice critical history – Addams is not a saint but a person with limitations and a social context. She had convictions, but she “held them lightly in her hand” and evolved as we all should.

Hull House was about Americanizing immigrants – a still vital issue – through classes and modeled social behavior. Conversely, they also had crafts programs that encouraged national identity – things like Mexican ceramics and Polish textiles. The Hull House kilns produced incredible ceramics through the 1930s and as soon as they quit the identical design was mass-produced by Fiestaware.

The irony was that the Mexican and Polish immigrants learned their “native” crafts not in their native land but at Hull House.

I like facts like that – real history always messes with your identity politics. The place that Americanized people also ethnicized them, through mapping, crafts, theater and so forth. Universalizing is only possible in a world of difference.

But they met and did things together. That was unusual in the context of the 1890s. And because they met, some things changed in labor, housing, parks and health.

And it was a success. They built a block of buildings in 17 years, not because they were empire building but because people used the facilities. To capacity.

Hull House is the only internationally significant site at the University of Illinois campus. The next challenge is getting the University users to realize that and take advantage of it.