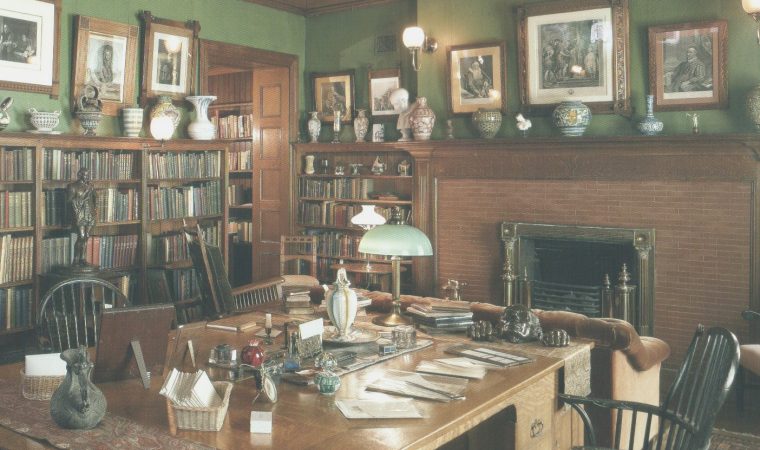 Friday night I went to see Rebecca Keller’s installation at the Glessner House on Prairie Avenue. The H.H. Richardson masterpiece is considered the progenitor of the modern house, and the interior features furnishings and art – 80% of which the Glessner’s actually had in the house. This makes it a step above the average house museum, which has “period” furnishings and is sort of an artificial time capsule.

Glessner House is a real time capsule, but that is also problematic, as Keller’s installation shows. She specifically attacked the idea of domestic service that made large 19th century houses practical, and also the issues of immmigration and gender, since most of the house servants were “Bridgets” – young Irish women.

Keller’s installation consists of a fair amount of quotes and textual facts added to books and slates (in the children’s schoolroom) and mason jars (in the pantry) that point to the oppressive conditions of servants and the great gulf between rich and poor in 19th century America. She also quotes the affair d’Zoe Baird, who paid her domestics $5 an hour in 1999 to clean a household that was clearing $600K.

More interesting than the directed didactics of the text are the aprons that Rebecca made and painted which serve as scrims to suggest the ghostly presence of the workers in the domestic factory that was the Victorian house. Lined along the servant’s corridor or inside a kitchen cabinet these ethereal presences are more evocative and ultimately more political than the texts.

What I like most is the opportunity to make a house museum something else – house museums have been around for a century-and have a predeliction for the stodgy and stale. Even Glessner House, saved for its architectural singularity, still must interpret its inhabitants and any attempts to beef it up, bang it about or subvert it are always welcome.