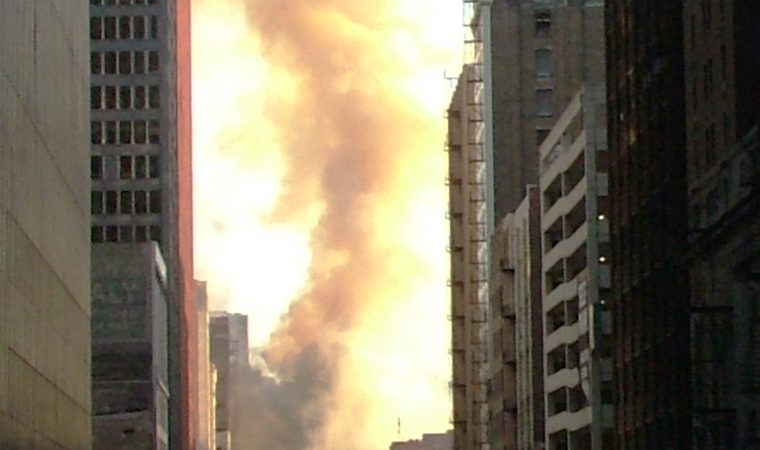 October 24, 2006 – Louis Sullivan’s 150th birthday celebrations have been marred again. In January, one of his greatest buildings, Pilgrim Baptist Church, burned down to the walls and its rebuilding is a very open question. A year ago his own home in Biloxi was destroyed by the hurricane (Katrina) that everyone but the federal government saw coming. Now I am watching one of his early highrises, the Wirt Dexter Building on Wabash south of the Loop, burn. The fire started an hour and a half ago and there is still smoke billowing out at 5:00 creating columnar cumulus skyscrapers. It is really disheartening.

It is too early to say what will be left of this simple but elegant early highrise – its back wall marked by long vertical perforated sheets of steel that stiffened its spine. This was during the days of the development of the skeletal steel frame that made skyscrapers possible. Wirt Dexter was an attorney and developer who worked with Sullivan on several projects.

What makes it all so terrible is how much Sullivan was torn down in the 1950s and 1960s – the Garrick and the Stock Exchange being the most significant, both replaced by guileless dreck. Beyond were all the great little neighborhood buildings – a dozen on the south side, others north and west. Sullivan was Chicago’s great innovator, a romantic and a master who made buildings into the kind of material poetry that it will take our digital friends another generation to even approximate. He fathered Frank Lloyd Wright and in a sense, the entire 20th century, not just in America but across the world. Gropius., Aalto and Saarinen and even the painter Le Corbusier are not possible without him.

We treated this legacy like crap – Rich Cahan has a new book out, following up on They All Fall Down, and it is hard to look at what we have lost. It is positively nauseating when you see what is in its place. Go to 30 N. LaSalle where the Stock Exchange used to be and see if your eye doesn’t fall right off of the 30 stories of black glass nothing they put there. It has no presence at all, only the absence of the brick and terra cotta lyrics that made that a corner in a city rather than a lacuna of memory. I have been in that building but I can’t remember it. I could go into it tomorrow and I would not remember it the next day. It is a bicycle shed.

Now the Wirt Dexter is burning badly and I am burning its face – and its back – deeper into my brain, because I fear that may be the only place to find them in the future.