November 24, 2006 Global Heritage, History, Interpretation Comments Off on If You Rebuild It, Will They Come? 1172 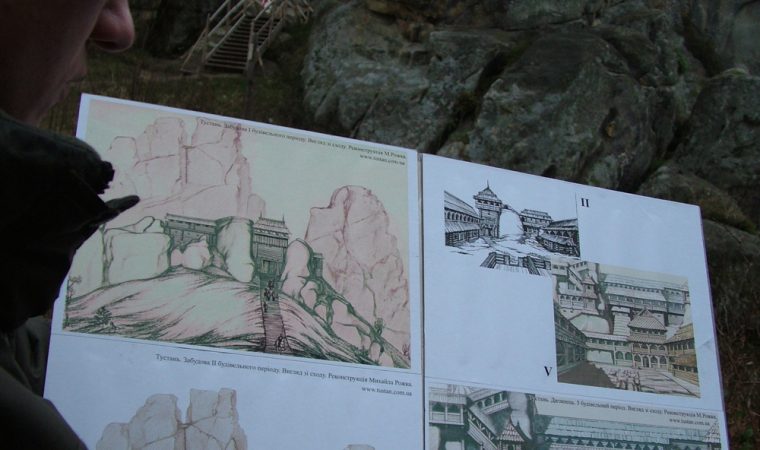 I just spent a week in the Ukraine participating in a conference on preservation education. They have a tendency toward reconstruction in the Ukraine. This may be due to years of being ruled by others – Tsars, Soviets, what have you. The day I arrived I was treated to a series of architecture student projects of excellent quality – half of which involved the reconstruction of missing medieval gatehouses and other vanished structures. We learned about the Kyiv Arsenal project, which proposes the reconstruction of fortress ramparts, and the proposal to reconstruct the Desiatynna Church, destroyed by the Mongols 800 years ago. There are no images or descriptions of this church – only its foundations. At least at Williamsburg they had a picture.

They have already rebuilt St. Michael’s church, destroyed by the Soviets. Spanky-new looking, the best that can be said for it is that it completes the urbanistic vistas across the old town from Santa Sophia. Everyone at the conference urged the locals to cool it with the rebuilding.

After the conference, a group of us traveled west to advise the team of archaeologists and architects at Tustan, a fascinating medieval fortress site erected by the Halyn-Volych Rus from the 9th to 14th centuries. Tustan is immediately reminiscent of Hrad Skala in the Cesky Raj and other castles built on limestone outcrops, except here the buildings were wood. For 25 years, Mikhailo Rozhko studied the rock using Alpine techniques to map over 4000 chiseled channels used to support the wooden forts and meticulously demonstrated how the fort appeared over 5 centuries, occasionally destroyed by fire and often amended and expanded.

But we don’t know what it looked like, despite the excellence of Rozhko’s work. The actual building techniques are still speculative, although some structural members, roof shingles and other elements have survived, and while the local museum offers intriguing and excellent views of what Tustan looked like during each century, our international group of conservation and archaeological experts agreed that reconstruction was a bad idea. I stressed that the experience of visiting the museum, seeing the plans and fragments and renderings and then having the visitor climb up to the dramatic rocks themselves –as we did – was much more engaging and exciting.

The problem with reconstruction is not just the kneejerk “Disney” reaction. It is about the visitor experience, which is a performative problem. Confronted with a reconstruction, the visitor thinks it is authentic and has always been there. It is also artificially complete and static, showing none of the effects of time. Most importantly, it offers the visitor no role, no engagement, nothing to do.

In contrast, the site as it stands now provides a major role for the visitor: they see the reconstruction drawings, the archaeological fragments, and then they clamber over a stunning natural rock formation, noting the channels in the rock and imagining the fortress. This is a more powerful experience for the visitor because the visitor creates it. It is the same in any performance – the audience must be an actor to complete the process.

This is why so many people are bored by history and museums – everything is presented in a complete, finished manner. It seems like a memory test. But when we let the audience fill in the gaps themselves, to become the historian or archaeologist who must piece together evidence and imagine a past with their own mind – then we have succeeded.

A big shout out to Myron Stachiw of the Fulbright program in the Ukraine, who organized the symposium and tour, and got the U.S. Embassy and State Department to finance my participation as Chair of the National Council for Preservation Education. Also to Henry and Chris Cleere, archaeological luminaries who participated in the conference and tour, Tustan site manager Vasyl Rozhko, archaeologist Yurij Lukomsky, conference co-director Mykola Bevz of L’viv Polytechnic, Piotr Krasny of Jagiellonian University in Cracow, Anna Summar of the U.S. Embassy, Lucienne Thys-Senocak of Koc University Istanbul, Taissa Bushnell, Adrian Mandzij, Oresta Remeshylo-Rybchyns’ka and so many others who contributed to a fun- and fact-filled week in the Ukraine.