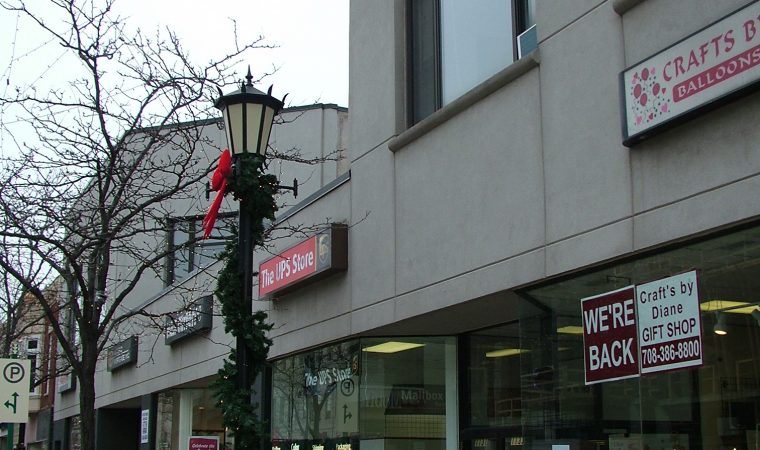 Next week – February 9 – a business group is hosting a breakfast about preservation and development in Oak Park. They are doing their level best to prove Santayana right – namely – forget history and be condemned to repeat it.

2004: Crandall Arambula do a downtown plan for Oak Park that calls for widespread demolition. People are mad.

Spring 2005: The ruling party is voted out of office for the first time in 50 years. Because of the bad plan. Westgate (a street in downtown Oak Park) makes Landmarks Illinois’ Most Endangered List.

Fall 2005: A broad community group redoes the plan for downtown Oak Park and their “consensus plan” recommends demolition of the Colt Building (see the picture) in order to save the other buildings on Westgate.

Actually, if you read the summary above carefully, the story is over. The Village Board is already voting down preservation by a comfortable margin. But, like Fox News, a local group is trying to get a wedge issue out of preservation, but in order to do that, they need to repeat history, to whit:

Summer of 2004: Crandall Arambula does a telephone survey with questions like this:

Fast forward February 9, 2007: from the ad for the panel:
“seek a better balance between development and preservation?”

DUH-OH! Call Santayana – they done did it agin!!

Which is more important – ice cream or dessert? Talk about false freakin’ dichotomies!

PRESERVATION IS DEVELOPMENT. Sorry to shout, but between the Wednesday Journal and the “Business and Civic Council” of Oak Park there is a heckuva lot of misinformation going around, and sometimes you need to bust some caps.

A whole bunch of preservationists agreed to the demolition of the Colt Building and then the Village Board turned it over 4-3. Two of those votes are already gone. Now they are turning on the Historic Preservation Commission, which has been a model of due process and deliberation (and also voted for the consensus plan).

This 50 year thing? Wha-a? When I was on the Oak Park Commission we approved the demolition of at least four such buildings. This is what the Hearst paper and the narrow-minded miss: Preservation is not a thing, it is a PROCESS. The results are not predetermined.

I have argued this point with developers, but they are just angling – angling for the absence of a process, which would make their job easier. And like any job made easier, it is done worse. You do economic development without any process and it happens faster and easier and it is gone in two years and looks like..well…

That is what the Wednesday Journal and this pretend business and civic group are up to – desperately looking for a wedge issue so it can elect no-process economic development junkies, the same kind who gave us the Cramble Tarantula plan and the retail equivalent of a floating crap game.

Preservation development is development done with a plan, done within the character of a community and with a process. It is a marriage made to last a lifetime, not a one-night stand.