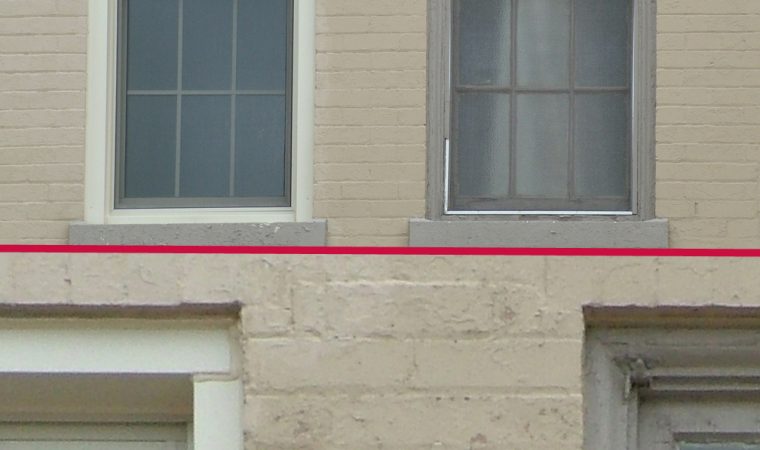 Q: What is the difference between pornography and window replacement?
A: One is a multibillion-dollar industry that exploits human weaknesses with the promise of temporary satisfaction; the other sells images of sex.

Here is a lovely side-by-side of a window replacement going on right now on Marion Street in Oak Park. The aesthetics are pretty obvious – the new window at left has quick-cut panning around the frame, pop-in mutins that look like masking tape applied to a window, and no detail. The old window on the right has curves, molding and depth to its forms. But aesthetics are nothing – many people would say the new window looks cleaner and are big fans of aesthetic cleansing. But does it have any other advantages? No.

ENERGY EFFICIENCY you scream! Scream all you want, I can see the gaps in the caulking from the sidewalk – I would happily give this building owner a nickel for every dollar saved on energy. ENERGY SAVER ratings, you bellow! BUT, they can only test the window itself, and everyone knows energy loss and drafts are largely through the frame, so the efficiency is actually dependent on the installation. Last year the Trib reported that almost a quarter of all windows on NEW buildings were improperly installed, allowing energy loss through the frame. I can SEE the bad caulking on top of the bad panning in this example. I raise my offer to a dime for every dollar saved.

There is an exploitative industry here that pounds you with moral messages about saving energy and then asks you to throw old-growth, tightly-grained wood and glass into the landfill. And just to make the morality play a little more perverse, they sell you a window that will itself need to be replaced in 10-15 years. Triple your rubbish for the sake of the environment! (Check the guarantees – Marvin and Pella offer the longest and they make some decent windows. The jokers who advertise make plastic or aluminum crap that even embarasses people in the industry.)

Let’s see, I’ve made my building uglier, shortened the lifespan of my windows, and depending on my contractor, garnered minimal savings on my heating and cooling bills for a couple years. BUT WAIT, THERE’S MORE! Yes, you have reduced the amount of light that comes in thanks to the ham-handed frame-and-sash technology that needs more structural strength to hold double-glazed units. Less window pane, more window pain. Plus, you have to close two latches instead of one for each window – I suppose if you use both hands this won’t take longer. Don’t think about why you need two latches: unlike old-growth wood, plastic and aluminum warp within a few years.

But hey, the building looks cleaner and you can advertise new windows to anyone who wants to rent or buy – just sign those contracts within five years or you are gonna get some ugly questions about why the windows are so hard to open and close and doesn’t that feel like a draft?

That’s when you start the whole process over. That is the beauty and pornography of the window replacement business model: The desire for a non-drafty, clean-looking window never, ever goes away. This is a perpetual motion machine: an expensive product that needs to be replaced every 10-15 years. (I’ve seen some downtown office building windows go screwy in 5-7 years)

It’s panned obsolescence: 1970s and 1980s windows are already a joke. The 90s windows are only a season or two away, and I am collecting photos of a batch of 2001 replacements – we’ll see which of them goes first.