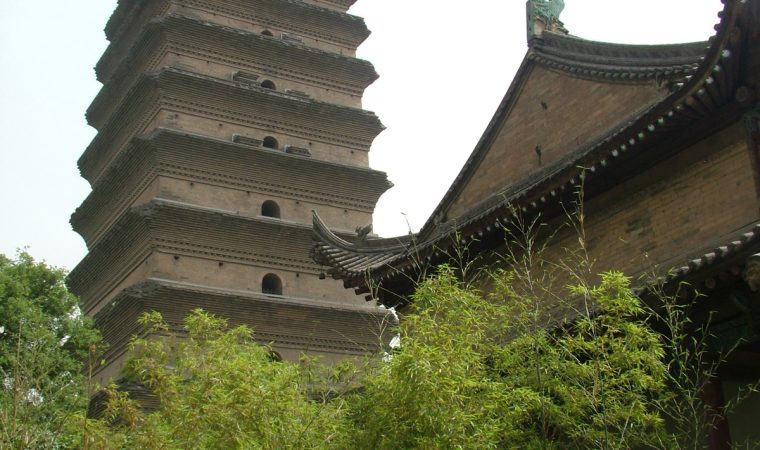 This is of course the Small Wild Goose Pagoda in Xi’an, which was much bigger than I thought it would be. They have a new museum which is really quite excellent, featuring that staple of Chinese urban museums, the absolutely massive model – in this case of Tang era Xi’an,a city of a million with streets 600 feet wide. We are more than halfway through the trip, and traveling with the Art Institute as a Study Leader allows me to not worry about all of the details we have when we bring students here. As a consequence, I enjoyed Beijing a lot more (we even ran into one of the Gao Brothers in the 798 Arts District and he took us on a tour of his private studio – he is making giant colorful statues of a infantilized Mao with breasts) and even Lijiang’s relentless tourism seemed less disturbing. Or maybe it is just familiarity, which is not breeding contempt. but you spend time in a country regularly over a few years and the strangeness leaves. Those clamoring limbless beggars and insistent merchants and bright lights and local vehicles and smells and foods all become an everyday you have lived before and much of it recedes into the rear of the picture plane. There is something lost in the decline of the exotic experience, and what is lost is clearly an innocence, but then again I wouldn’t be a study leader here if I was still an innocent. What was odd was my reaction to the terra cotta soldiers in Xi’an which may have reflected my mood. It was great, but not overwhelming somehow after years and years of anticipation, and like the new Xi’an museum it was actually first class by any world standards. I guess that is the most amazing thing about the new China – it isn’t third world anymore – there is plenty of feudalism and human misery in the rear of the picture plane but the place as a whole is confidently surging into its inevitable leadership role, Pundits like to complain about the growing gap between rich and poor and the strides yet to be made in human and civil rights but this is a place that has witnessed a thousand percent increase in both rights and prosperity in the last 15 years. We have no idea at all what that feels like.

I have lectured on architecture and the arts (with a focus on Buddhism Taoism and Confucianism) so far and my last one is on landscape painting. The Chinese landscape painting, like the landscape and the timescape we have been in here is a thing that is not compartmentalized like the impossibly hermetic Western view of Nature as the other. It is not Nature without the human and while the Nature is sublime, it is only sublime due to the human pavilions and wanderers who inhabit, observe and experience it. It is a landscape seen from multiple dimensions at once, not in a fractured or fracturing way like the Cubists, but in a natural and harmonious way. The goal of the artist is harmony just as the goal of society is harmony with nature, not its conquest or its deification. All perspectives find room in the picture plane not as representation or realism in a graphic sense but realism in a human and natural sense. That is what I am feeling this trip – Xie He’s qi yun shen dong – spirit resonance,a harmony of nature and a recognition that art is the human appropriation of nature that allows nature to become.