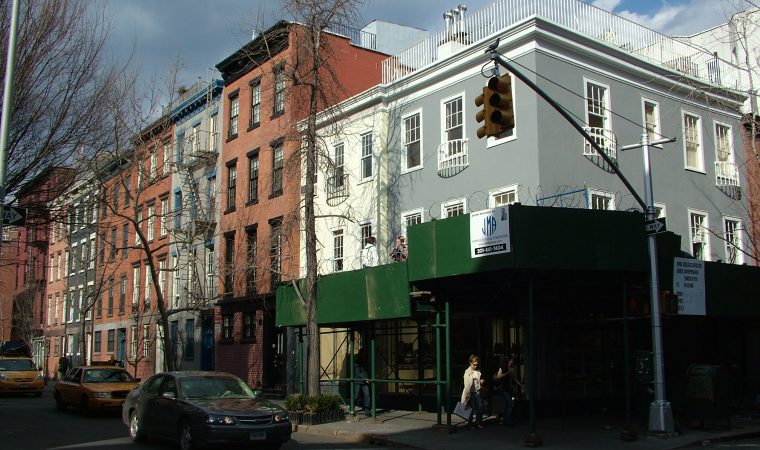 You see these rowhouses everywhere, and Dolkart has unearthed tons of period commentary and reportage on the conversions: they usually involved complete interior remodeling of partitions, kitchens, and the like. They also often involved exterior remodeling that typically eliminated the stoops for new groundfloor entrances; shaved off many of the window and door mouldings; rendered the facades with stucco; often added multipane, casement or studio windows; developed rear gardens in an early and successful attempt at gentrification. 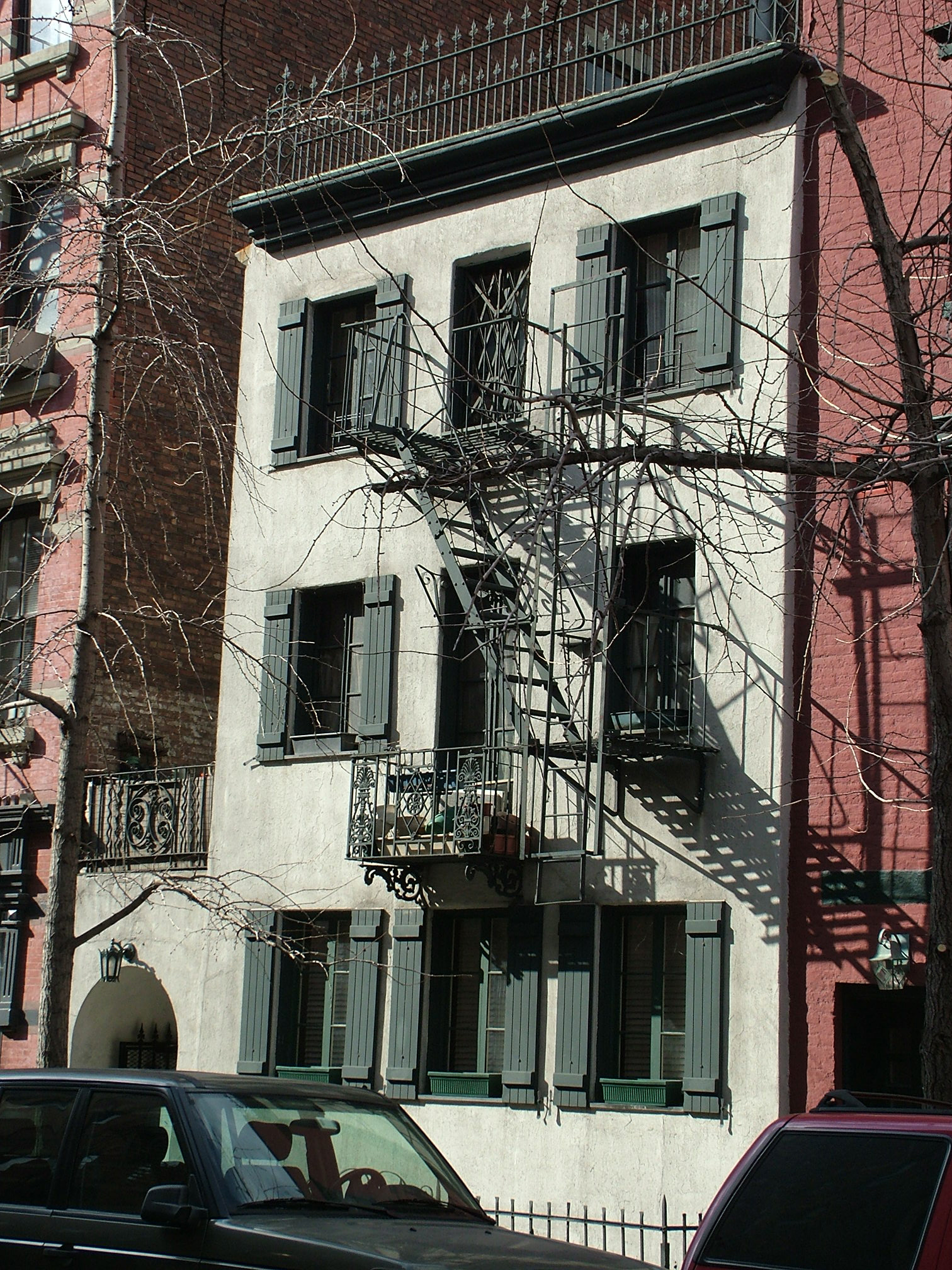 93 Perry Street facade. The archway at left leads to the garden and rear building in this 1928 rehab by local architect Floyd McCathern. Dolkart includes a 1932 photo in his book. This photo is copyright Felicity Rich 2006.

Dolkart’s investigation therefore explores one of the philosophical issues that constantly recurs throughout the history of conserving the built environment: when does something become historic and WHEN are we trying to restore things too? Clearly changes to rowhouses that happened in 1912 or 1922 are now “historic,” yet Dolkart notes that many such changes are eliminated with the full approval of landmarks agencies when owners propose restoring a rowhouse to its original condition of the 1840s or 1880s.

Dolkart’s contribution is significant in his detailing of how these remodelings were considered in terms of architecture and real estate development. He first details the many projects of Frederick Sterner, who redesigned many houses for himself and other high-end patrons, transforming the East 60s from an immigrant area to an island of elite pied-a-terre. Dolkart crafts a compelling architectural context for these conversions as representing a distinct social and aesthetic history that is implicitly worthy of some preservation. 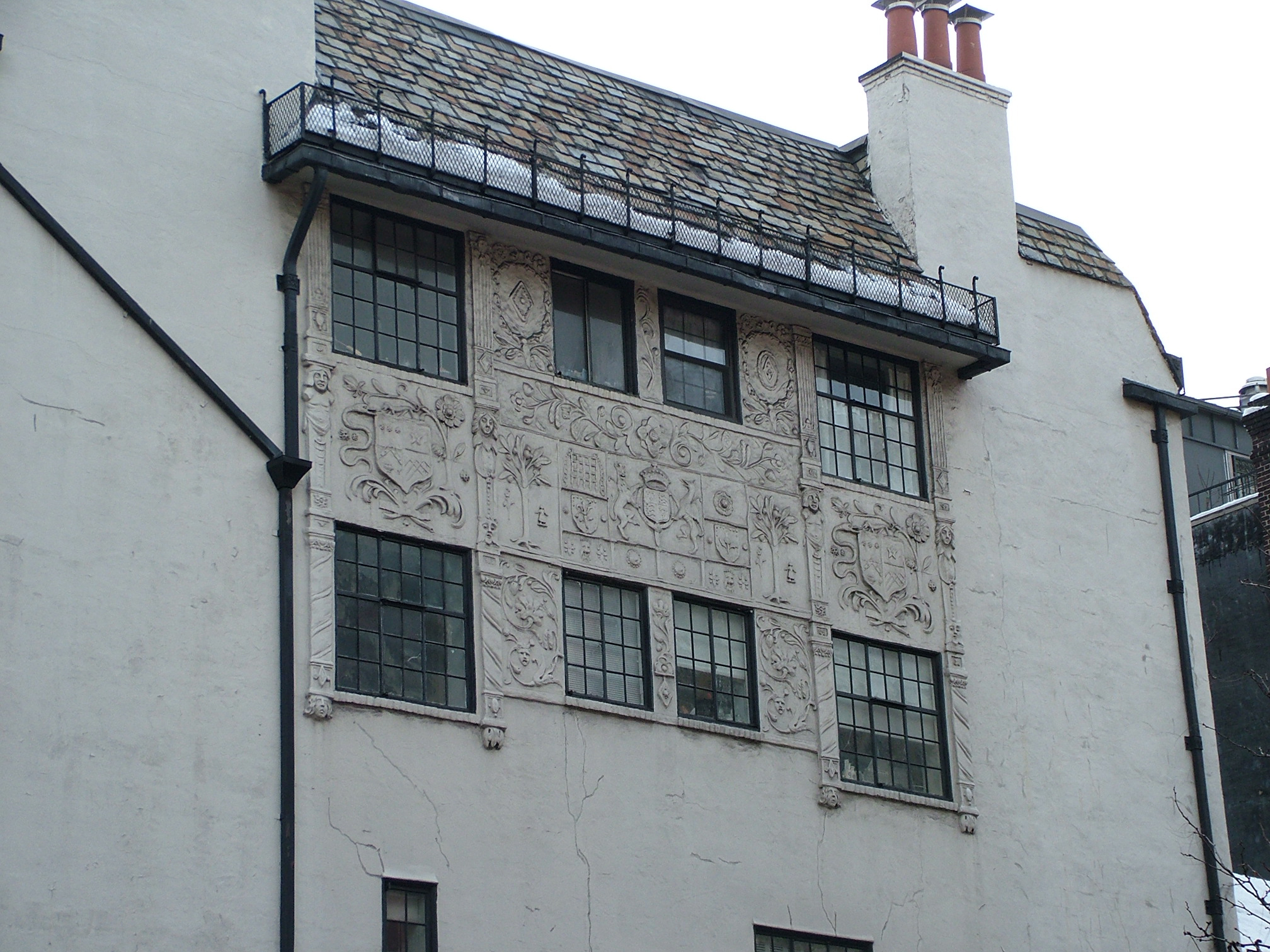 The Parge House on East 65th, Frederick Sterner’s final house. The use of ornamental relief in the exterior stucco (pargetry) was a feature of Sterner’s work. Photograph copyright 2006 by Felicity Rich.

Dolkart devotes a significant section to Greenwich Village, which I studied as part of my dissertation. The Village is fascinating for two reasons, both of which are central to Dolkart’s story of early 20th century creative rehabilitation. First, the Village had a strong artistic identity, an identity I explored in my dissertation, relying on many of the same sources Dolkart cites (and critiques). This artistic identity was turned into both heritage tourism and real estate speculation, as the artistic identity of the community became a rationale for rehabilitating buildings by adding artist’s garrets, large studio windows and the like, even as the buildings were being rehabilitated beyond the means of most artists to rent or own. 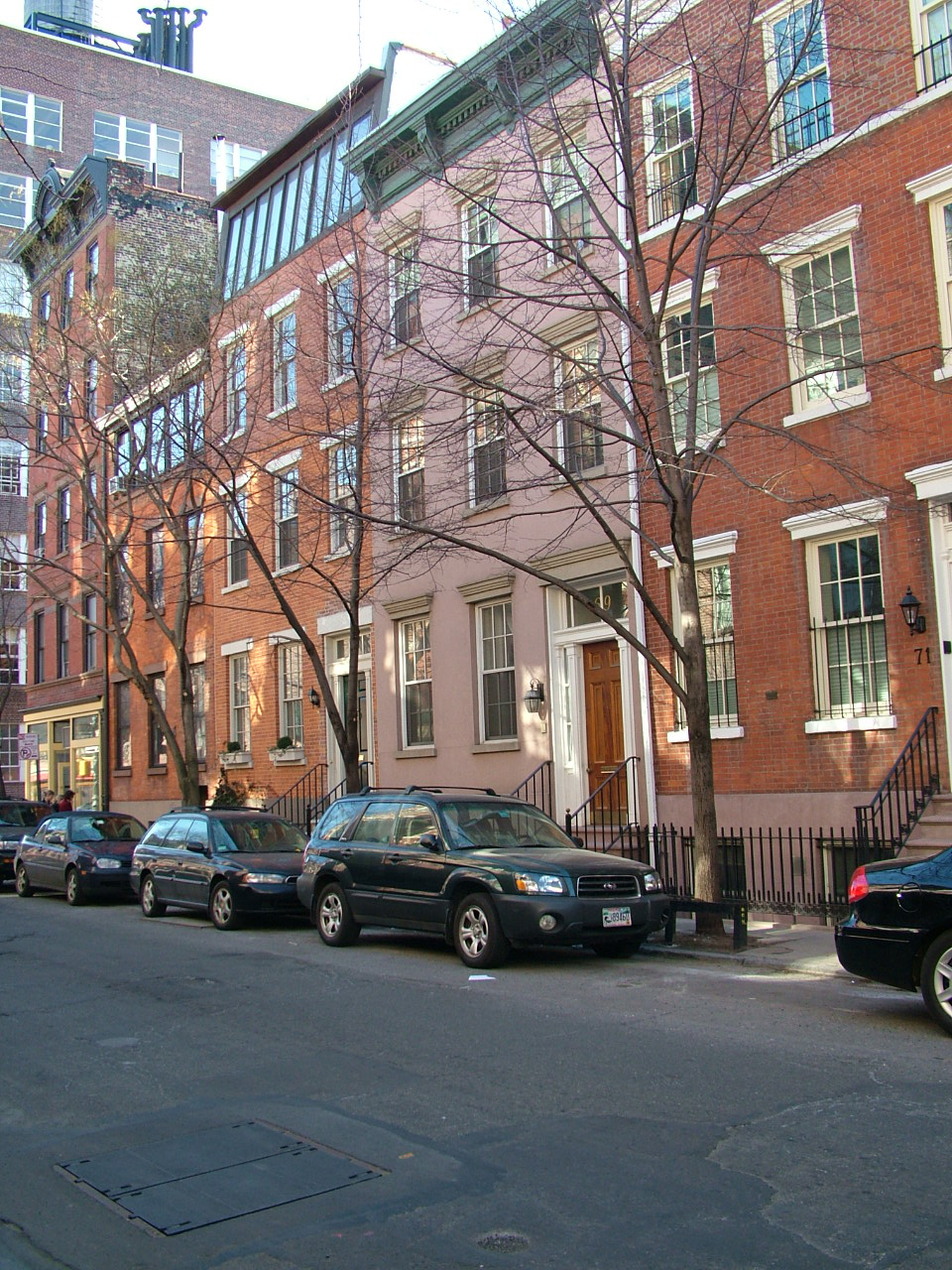 Greenwich Village – another photo copyright 2006 by Felicity Rich. I guess she was noticing these buildings a few years back…

In my dissertation I dealt with Greenwich Village because it was central to the adoption of local landmarking and preservation in general but it lacked traditional architectural integrity, and these 1910s and 1920s row-house rehabs are part of the reason it was originally proposed to be 18 separate historic districts. Thanks to a centuries-old artistic identity and the concept that landmarks designation would help make the district more architecturally cohesive over time, it became a single district in 1969. I used it as an example of the community-planning impulse in landmark designation, which has at least two aspects: first, the motive to preserve not simply architecture and history but community in the largest sense, and secondly a future-orientation focused on community improvement and employing landmark designation as the motor and model for that improvement. Certainly many of the 1910s and 20s rehabs have been “fixed” since the designation of Greenwich Village, which is why Dolkart began looking at this issue in the first place.

My only critique of the book is its perhaps natural limitation – an Epilogue of less than 10 pages called “Beyond New York City” with brief mentions of Boston, Philadelphia and Charleston. In my work I compared the ongoing conservation development of Greenwich Village – “Zoning Bohemia” – to its Chicago counterpart of Old Town, certainly smaller and about 10-15 years behind its Big Apple cousin. But as soon as I started reading the book it immediately brought to mind the same type of 1910s and 1920s rehabs in Chicago’s Old Town, like this: 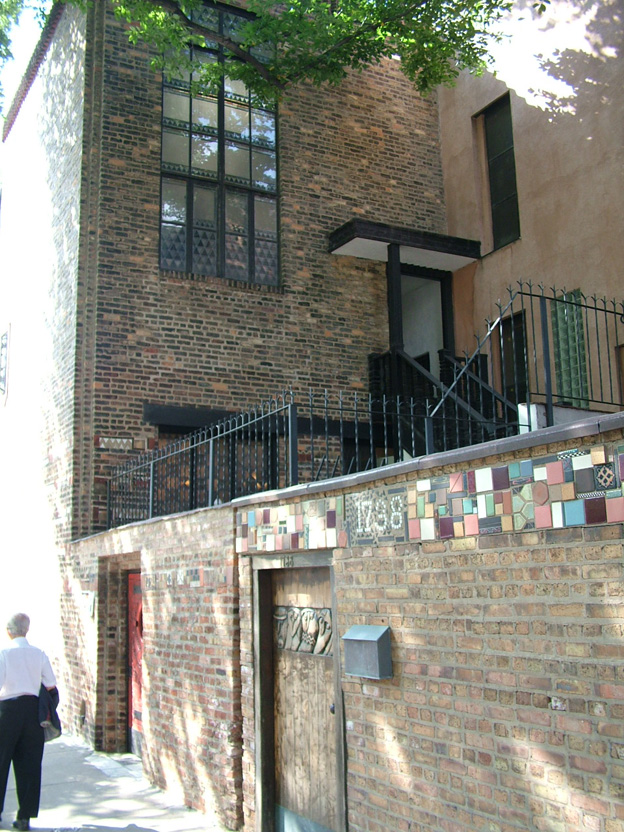 Now this is of course one of the now-famous and independently landmarked homes that Sol Kogen and Edgar Miller fabricated out of existing building stock in the 1920s. But Old Town also has stuccoed, Mediterranean-Revival-roofed houses on Lincoln Park West and altered Italianates with casements and studio rooftops – all added during the transformation of the district into an artistic enclave in the 1920s. There was even a wave of 1960s rehab that inspired the district itself in the 1970s, and much of that did not follow traditional architectural preservation standards. 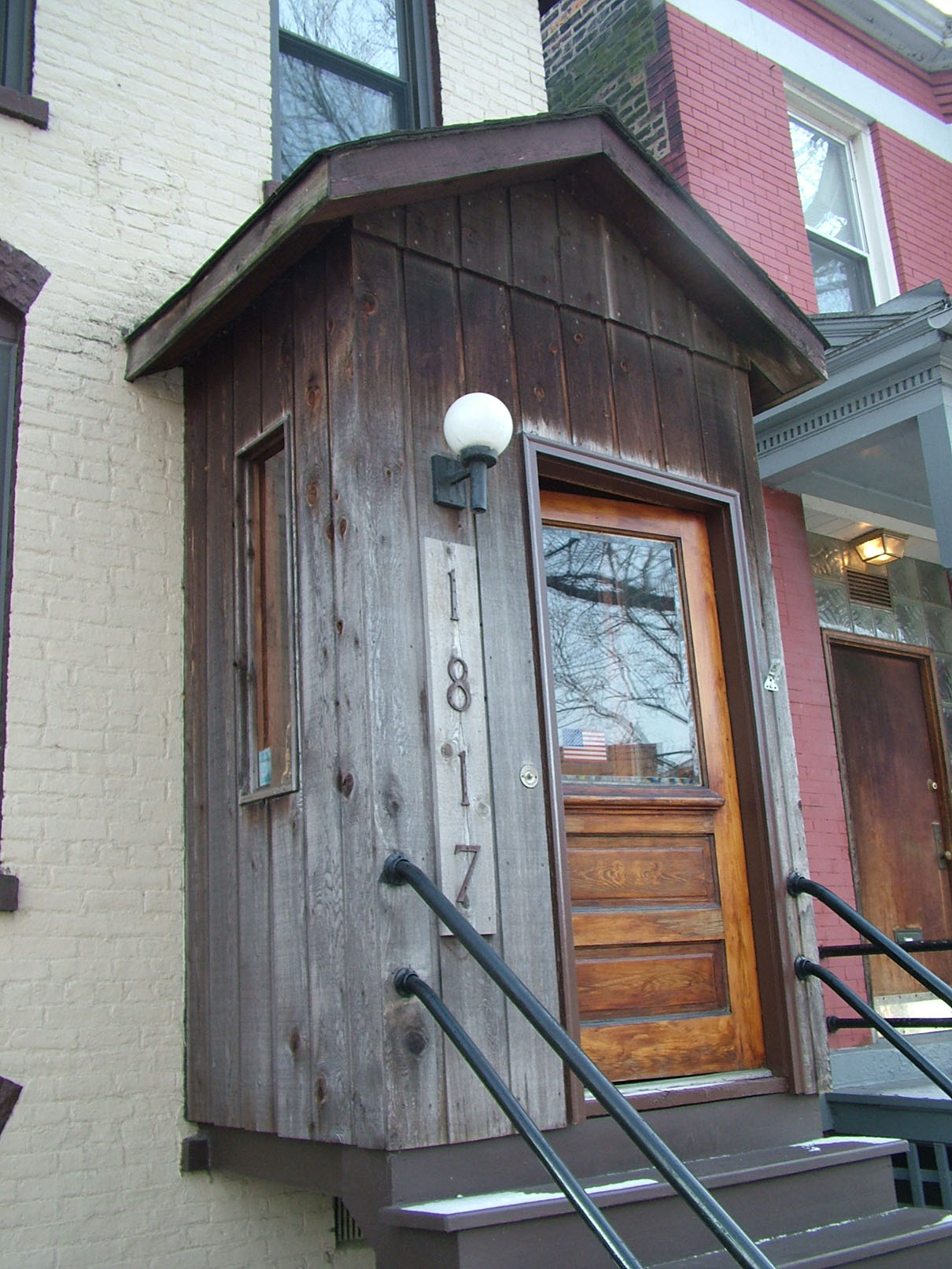 I am grateful that Andrew has written such a nicely researched and crafted book and I hope it inspires us to look at the early waves of rehabilitation and how they thought about buildings and communities. It was a welcome, enjoyable and inspiring read.

Here are the buildings on Lincoln Park west I was thinking of. I haven’t researched these so I don’t know when they were altered, but the first (actually on Menomonee at the foot of Lincoln Park West) has extra-long windows, a rendered upper facade, and diamond panes in the lower windows: 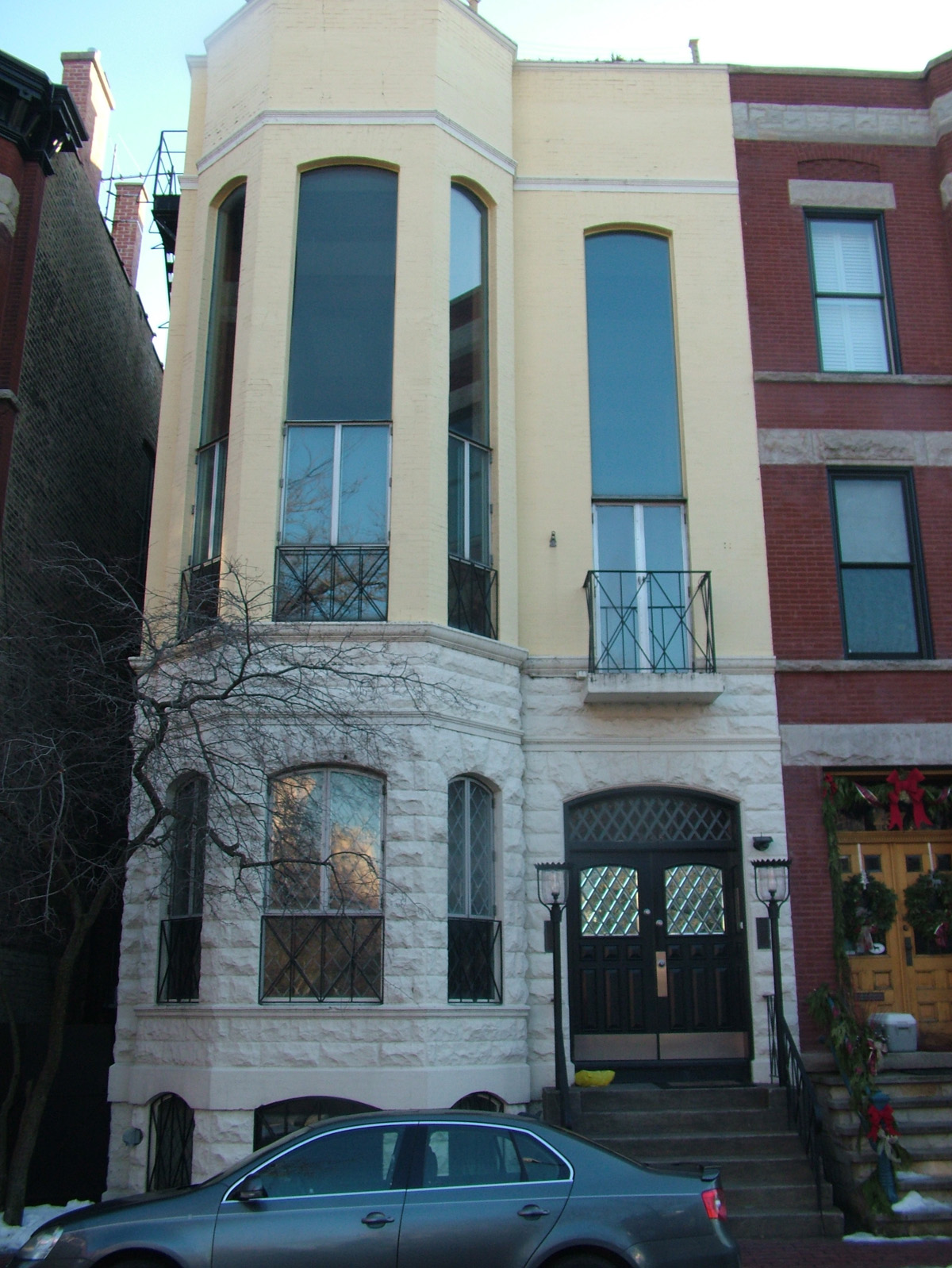 Next, a few houses north on Lincoln Park West, are these two old Italianates made into Spanish Colonial houses with render, a pent tile roof, and adobe-like walls. Again, I haven’t done the research but I am guessing 1920s. 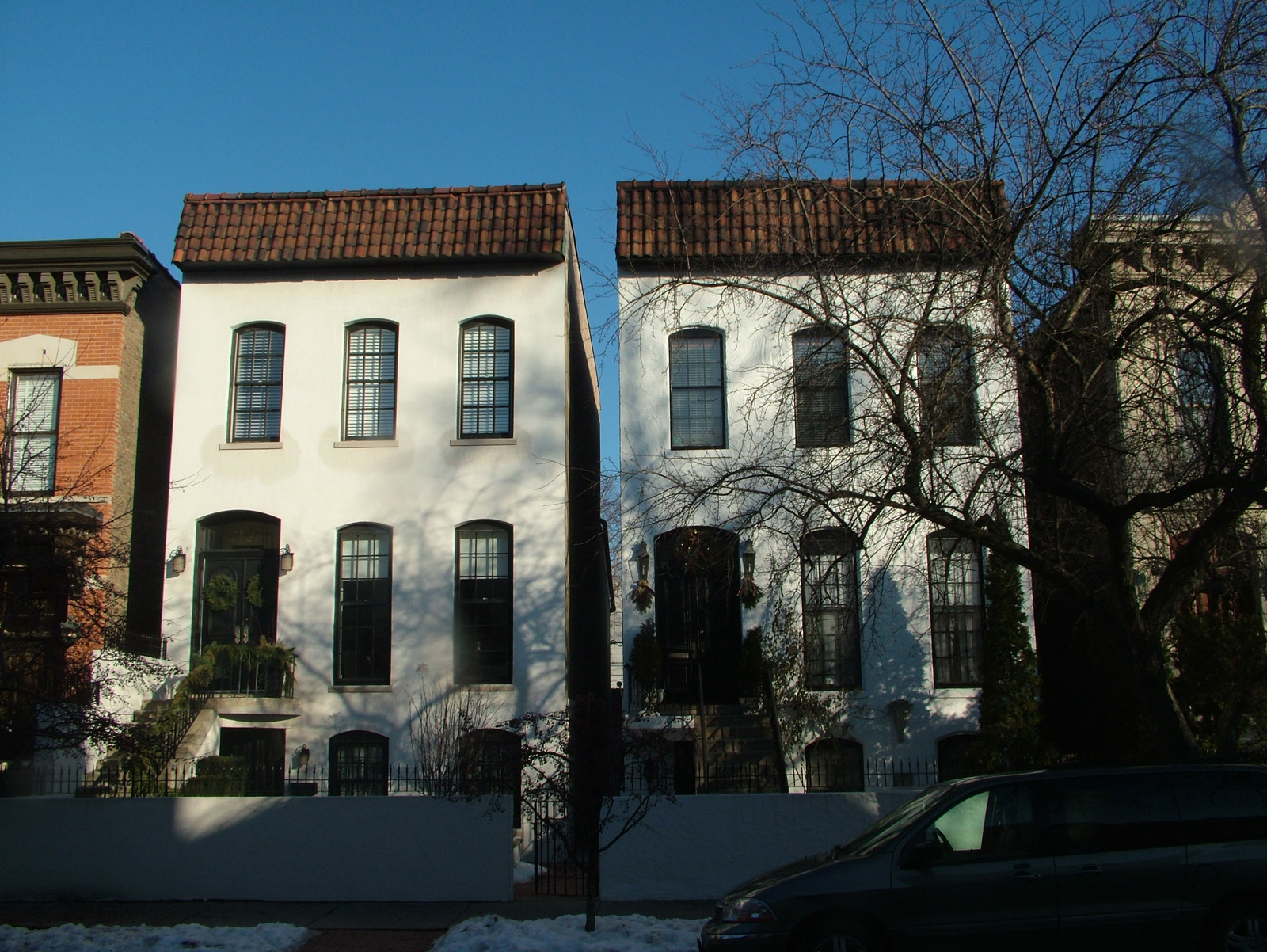 And of course the Crilly Court gardens remind one of the many rear garden schemes Dolkart found in Manhattan. This is where the Old Town Art Fair started in the 1940s, 15 years after Greenwich Village started its art fair. 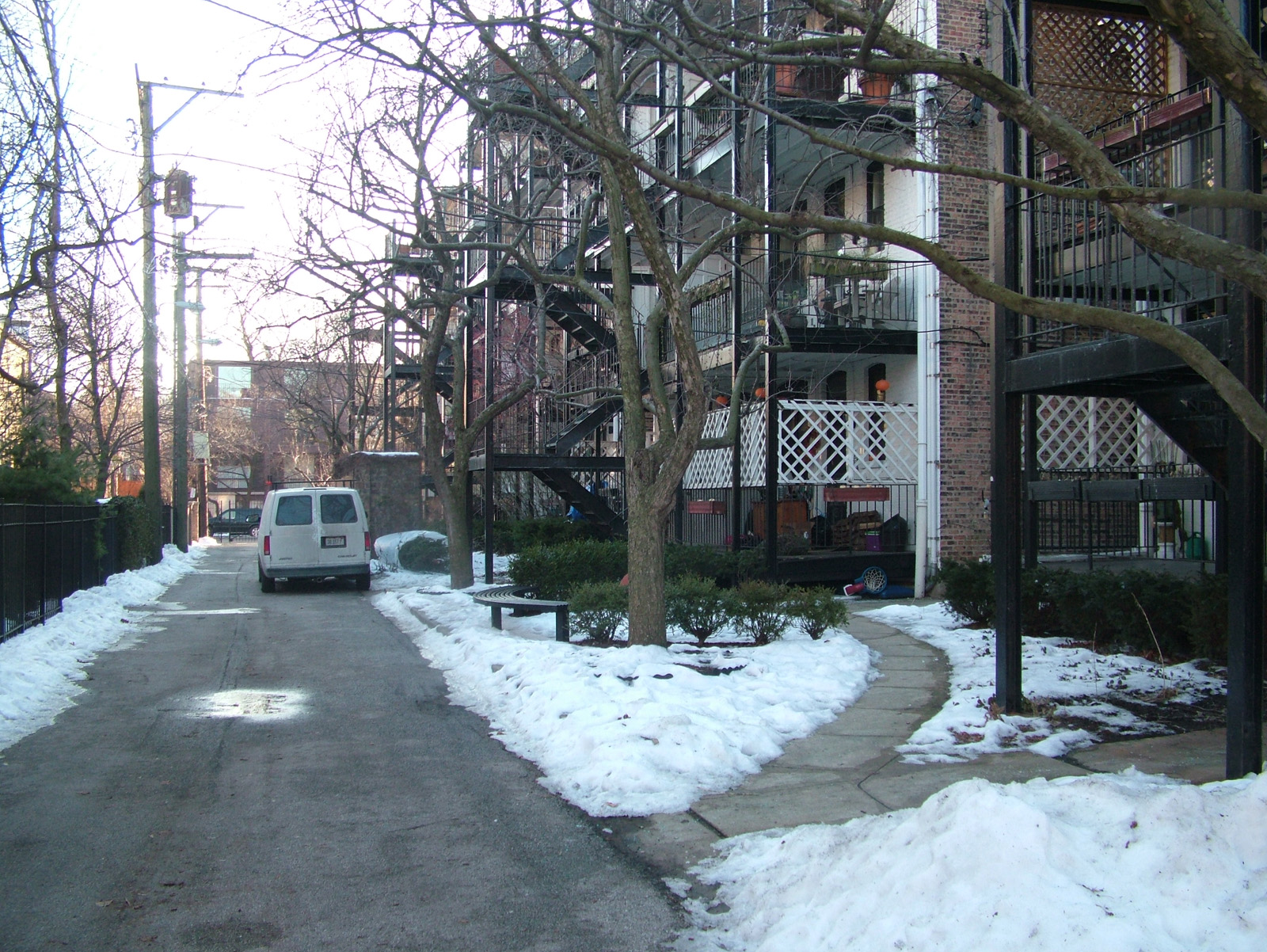 There are quite a lot of 1960s-70s rehabs in Old Town, when the area become popular and started lobbying for landmark protection. 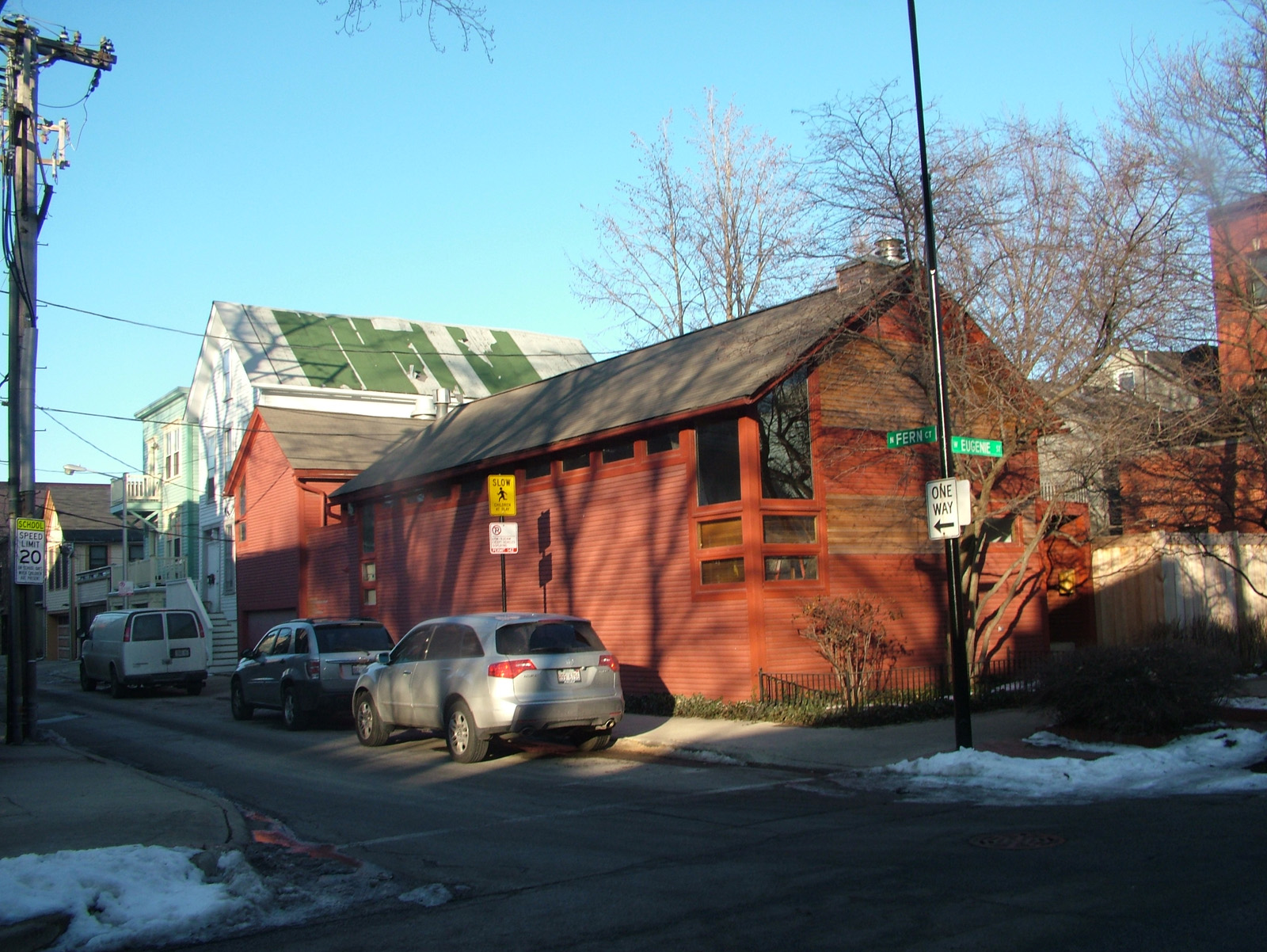 I found another near Michigan Avenue -as I knew I might, since the area around the Water Tower – Towertown – was the artsy area before the creation of North Michigan Avenue in 1920. I also noticed several over on La Salle near Burton Place, the ultimate arthouse block done by Kogen and Miller in the 1920s. Here is the one off Michigan Avenue: 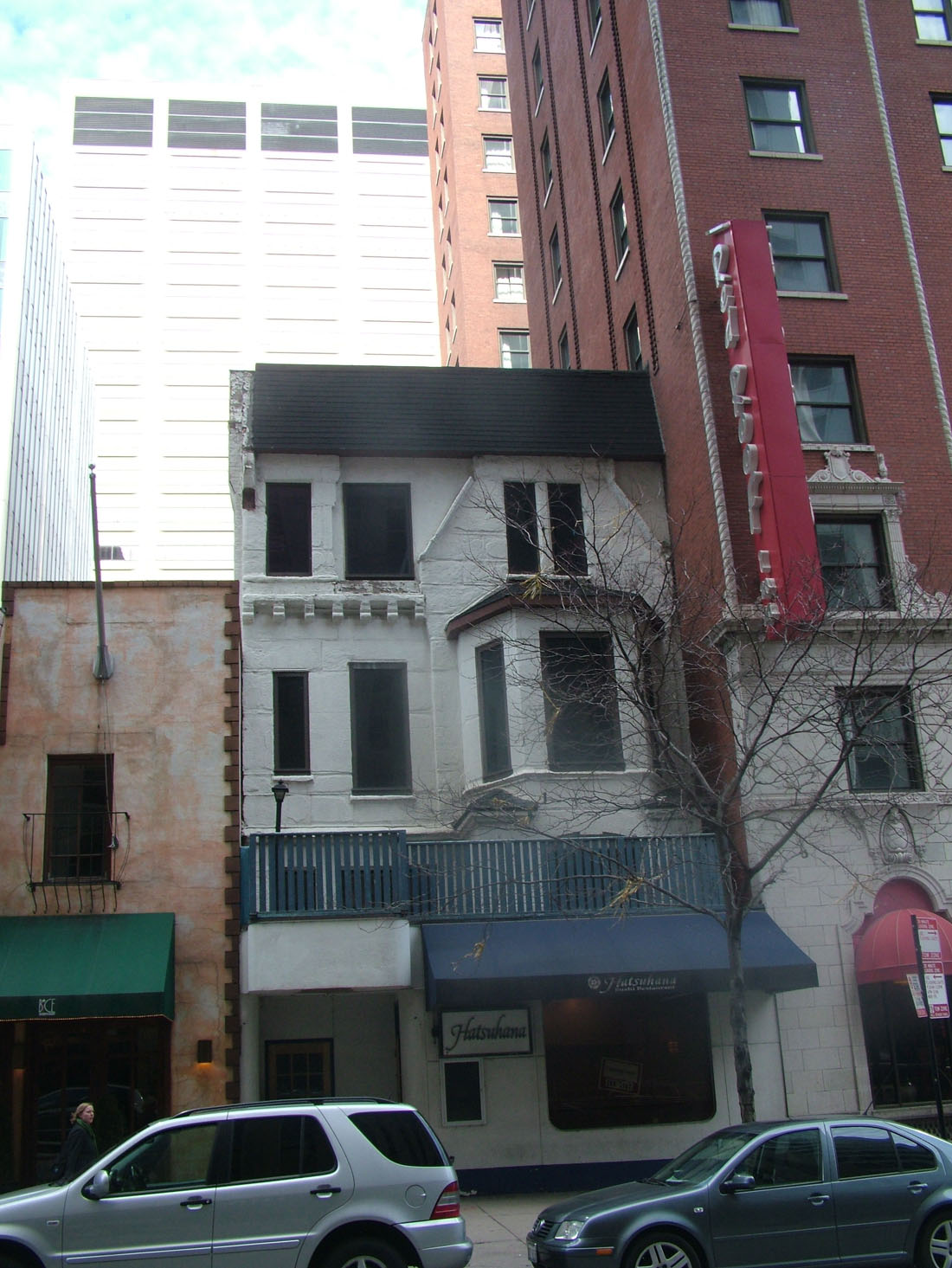