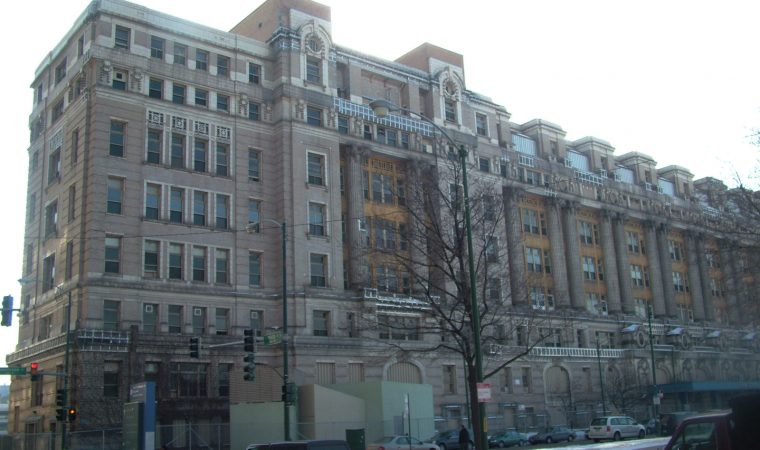 In Chicago today the news is the unanimous decision of the Cook County Board to rehabilitate the historic Cook County Hospital Building (1914, Paul C. Gephardt) as medical offices. Seven years ago the building was to be demolished after the new John Stroger Hospital replaced it, but Landmarks Illinois and Preservation Chicago and others were able to find enough County Board allies to prevent demolition, and the unanimous action yesterday illustrates the shift. The project also ably illustrates several intriguing aspects of rehabilitating historic buildings.

First, there is the associational aspect. While the hospital had several historic firsts: blood bank; indigent care, certain emergency room procedures. Yet many people of course had very negative memories of the hospital since it was the medical last resort for so many of the most indigent for so many years. I remember going there in 1983 to see a friend who had gotten his head cracked for supporting Harold Washington’s mayoral candidacy. It was not an environment to elicit enthusiasm, but it wasn’t as bad as I expected, having grown up with horror stories of the public hospital. What is intriguing here is how the negative associations are translated into a push for demolition. We got similar reactions in the effort to save one of the Jane Addams Homes, replete with the negative association we formed of public housing in the 1960s and 1970s. 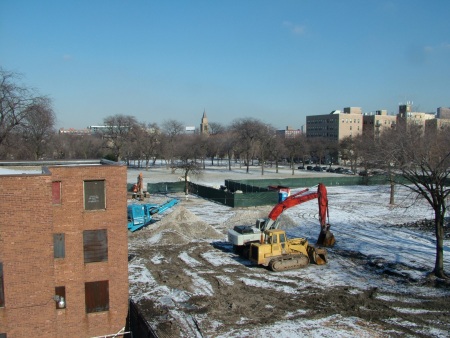 But of course we toured the homes with people who had lived there in the early, glory days of public housing, who had nothing but positive memories of the place in the late 1940s. The problem with negative historical associations is that they can be employed to demolish an otherwise beloved place. I always recall the example of Stop N Shop on Washington Street in the Loop. Until the early 1980s, it was a rare and wonderful downtown grocery with all of the finest delicacies – I remember gigantic chocolate-dipped strawberries in an era before strawberries all became gigantic (steroids?). Stop N Shop was a real treat and a beloved place. It also occupied a stunning 1930 Art Deco building, but the entire block was slated for redevelopment. 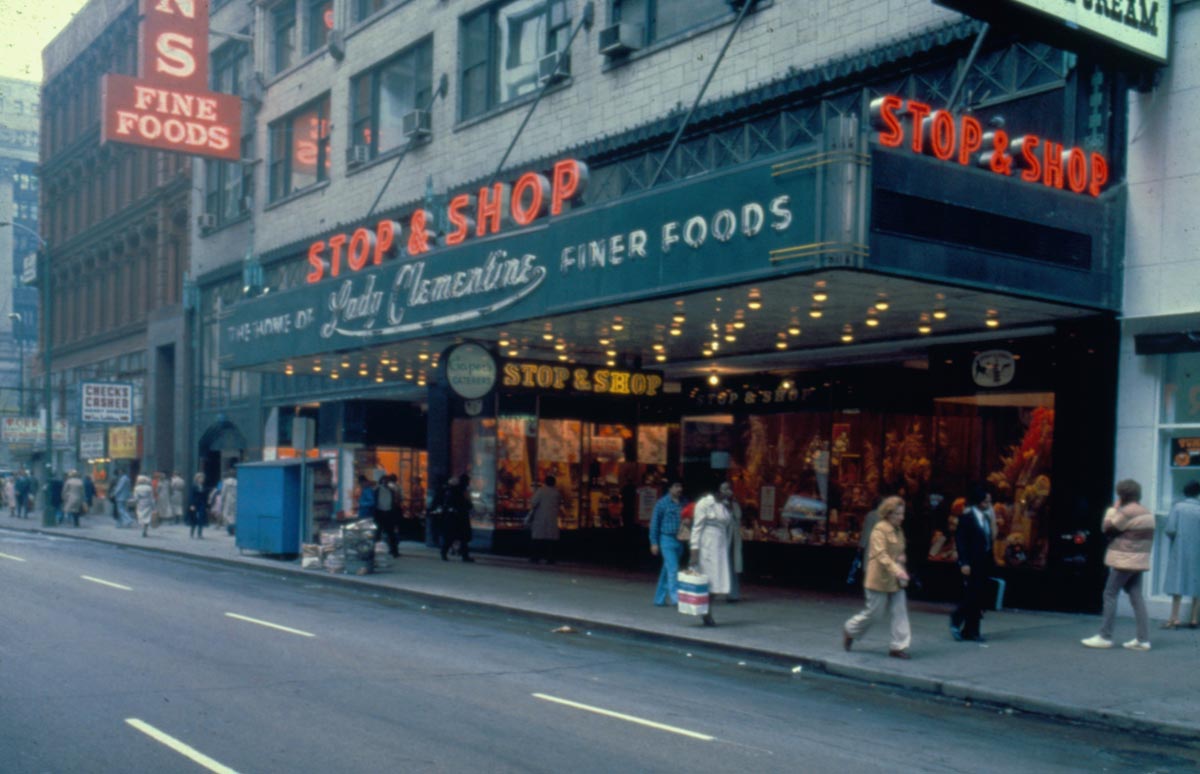 Now, you would have a problem demolishing a lovely store with positive associations, so Stop N Shop was closed, and a discount men’s clothing store (two pairs of fuschia trousers for $10!) was put in its place for a few years. By the time demolition came around, no one was bothered by losing the cheap pants – but they would have been upset about the chocolate-dipped strawberries.

Back to Cook County Hospital. We also have the aesthetic issue, and here the hospital’s grand Beaux-Arts facade with paired fluted columns, elaborate terra cotta ornament featuring garlands, cartouches, human and animal sculptures and grand arched entrances proves worthy. Not only that, but compared to the refrigerator box that is the new Stroger Hospital, the Classical detailing and refined proportions began to look better and better. I suspect that if the new hospital had a more felicitous design, the rapture people developed with the old hospital might not have been as intense. 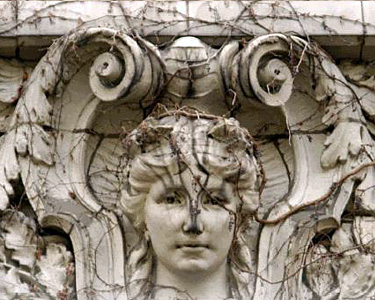 Then, of course, you have the issue of construction then and construction now. Building built before 1930 tend to be REALLY WELL BUILT, and Cook County Hospital is a good example. Despite the bands being used to stabilize the terra cotta details, the steel and concrete structure has been investigated and found to be sound. Antunovich Associates did a re-use plan via Landmarks Illinois that helped forestall demolition last decade because it proved the building was still a viable structure. Blair Kamin’s excellent piece in the Tribune notes also that rehabbing the structure saves about 900 truckloads of landfill debris, not a small number. This is of course WHY PRESERVATION IS SUSTAINABLE. And green. (BTW check out the new GREEN issue of Preservation Magazine – or go to the National Trust link at right!) 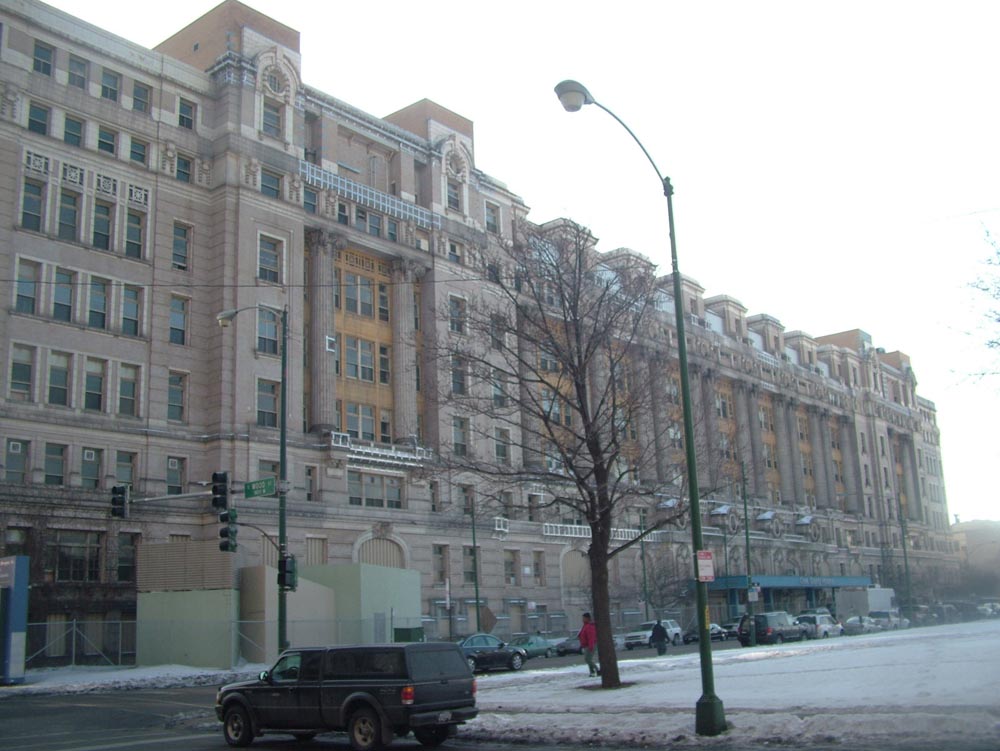 Now, the other intriguing aspect of rehabilitating historic buildings is of course the economic aspect. The County Board did dither about the cost – apparently $23 million more (about 20 percent) to rehab rather than to demolish and build new. Ignoring the social and environmental costs of those 900 trucks of debris, this aspect of course triggers a familiar response – preservation costs more.

Does it? Demolition and a new office building would cost $85 million instead of $108 million, which is more IF both buildings do the same job for the same period of time. Which I doubt.

Old buildings, like old windows, are generally built with stronger materials than modern ones. Beyond structure, this is a gut job, and the big cost is that decorative facade, accounting for 80 percent of the cost differential. They are talking about TIF financing, an overused tool, but if they were to make it a private building it would immediately be eligible for tax incentives which would make up the entirety of the difference. Just like preservation tax incentives are intended to do.

But comparing a lovely old Beaux Arts landmark with a new refrigerator box is like comparing apples and Tupperware. There is a functional comparison, but the new building would NOT have a decorative facade. Would it need one? No, but you never NEED beauty or grace in life, do you?

The fact is we ALREADY have a decorative facade and we know it looks good – much better where it is than in a landfill. This building got a lot of public support in the eight years it took demolition to turn into rehabilitation.

And it is prominent – this building has a giant plaza in front of it and then an expressway – it is a face of the city and deserves to be preserved as much as other faces of the city like Michigan Avenue or Lake Shore Drive.