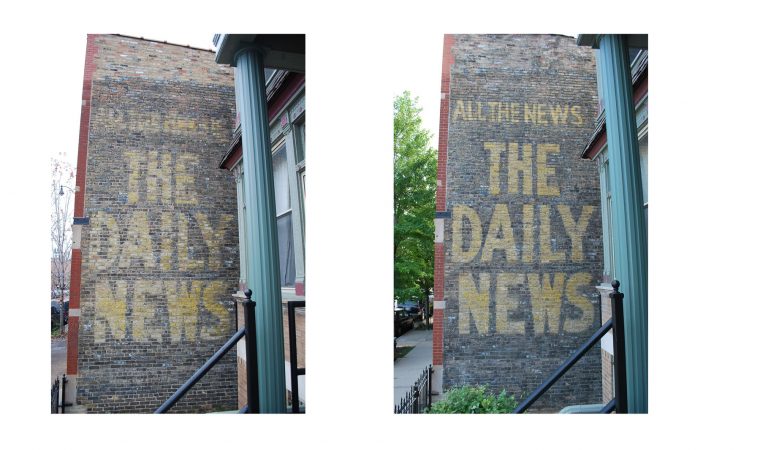 SAIC did a good job repointing the wall at the Roger Brown Study Collection at 1926 N. Halsted in Chicago, saving and enhancing the existing Daily News ghost sign that has been there for the better part of a century. Here is the before-and-after courtesy of Ron Fitzpatrick, Director of Design and Construction.

This ghost sign may have helped inspire Roger to choose the building for his home and studio back in the 1970s. Ghost signs are a fascinating phenomenon, and hard to preserve. We just lost the 1960s Pago Pago sign downtown, and invariably they appear and disappear quickly. Here is one that emerged for less than a month in 1997, on North Avenue near Humboldt Park. It is clearly a pre-Prohibition sign revealed when a nice Victorian was demolished adjacent to Roeser’s Bakery – Seipp was a major Chicago brewer and the builder of Black Point in Lake Geneva.

SAIC MSHP alumna Nicole Donohoe did her thesis on ghost signs, an amazing inventory (the largest thesis ever in our program!) and even got on WTTW once thanks to her great work.

One Response to :
Ghost Sign at Roger Brown Studio