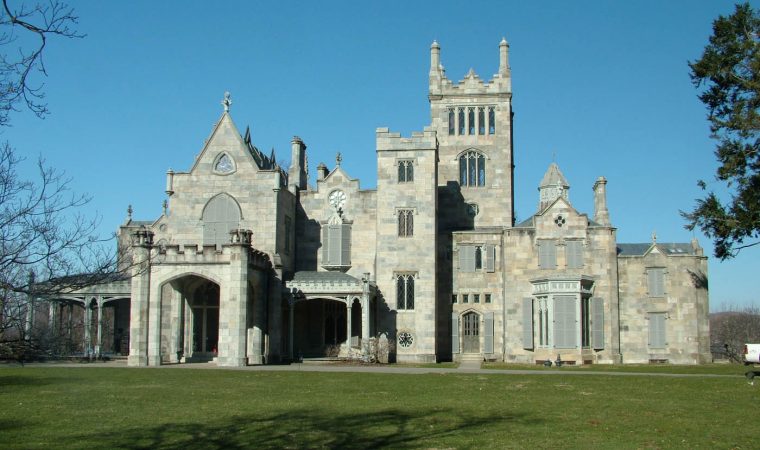 Designed in two stages by Alexander Jackson Davis for two owners, Lyndhurst is best known as the onetime home of Gilded Age robber baron Jay Gould, and its architecture reflects the ostentation and chutzpah of the man who created the first “Black Friday” in the stock market 130 years ago. It has been a Trust property open to the public since 1965, and many hikers and bikers pass by daily as they ramble along the Hudson River. 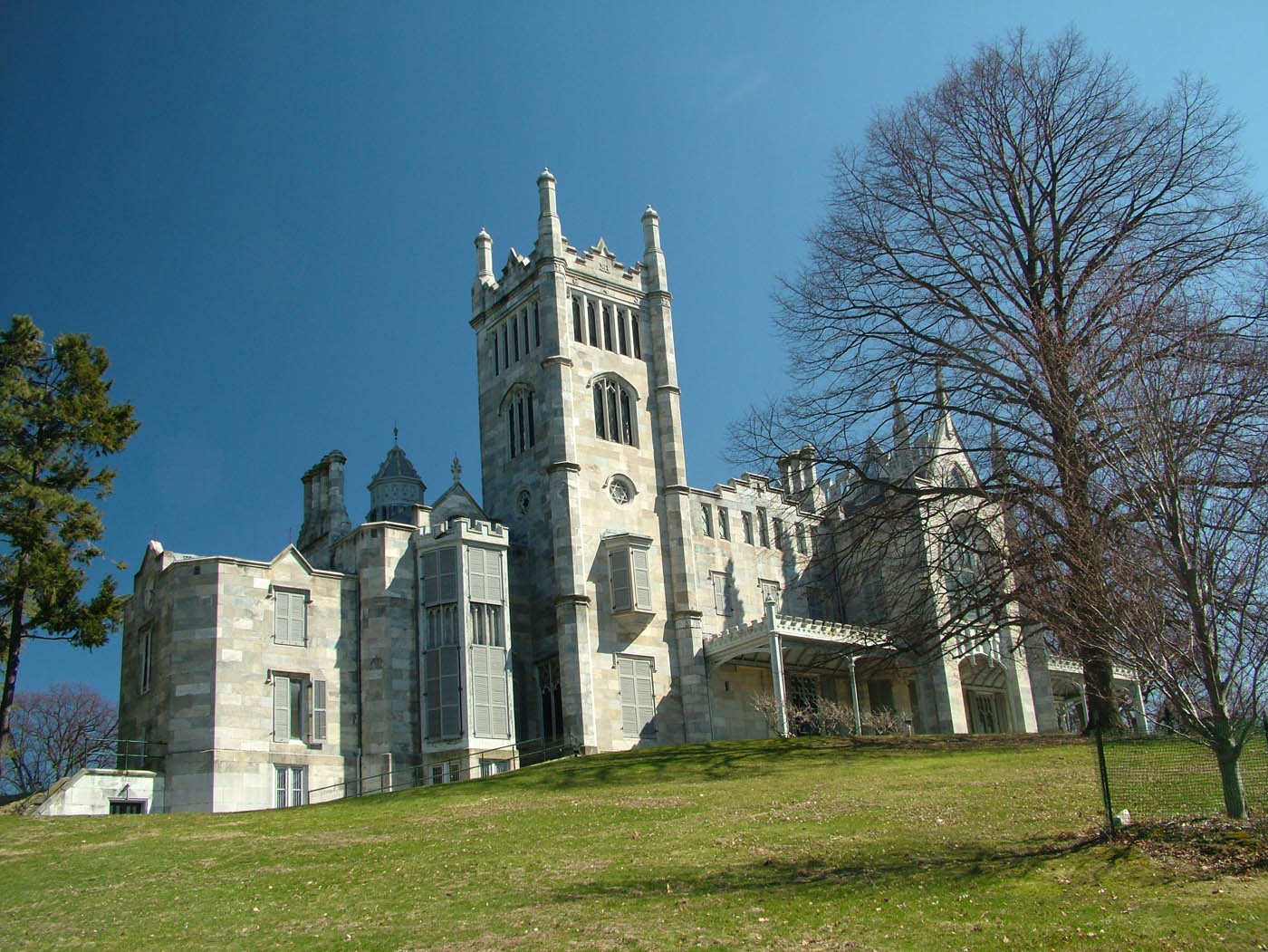 There are several outbuildings, including this fascinating Shingle Style bowling alley from the late 19th century. 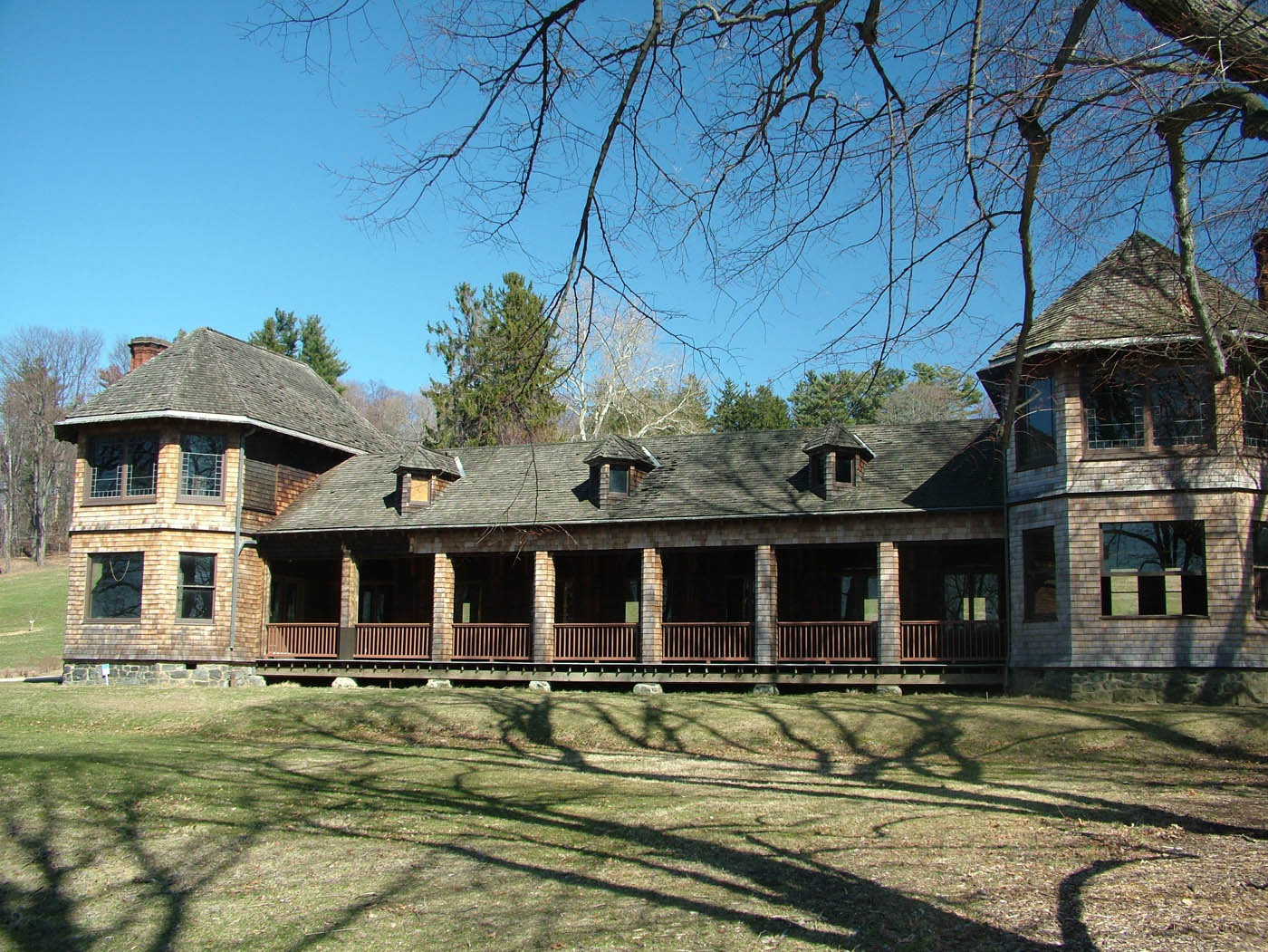 We had a dinner at Lyndhurst, which has had its financial challenges over the years but has improved as a site for events and activities, something all house museums must do if they are to get “beyond the velvet ropes” into sustainable business models. I have said it many times, but it bears repeating: Historic houses museums have NEVER IN ALL OF HISTORY made more than about 20-25% of their operating income from tours. Creative programming and appropriate income-generation are necessary for all sites. We had good discussions about how business opportunities at sites can and should be integral to the site’s mission and interpretation. You don’t simply jump at the first opportunity: you develop ideas about business activities that reinforce what visitors to the site can learn and take away with them. That way stewardship is built along with financial support. 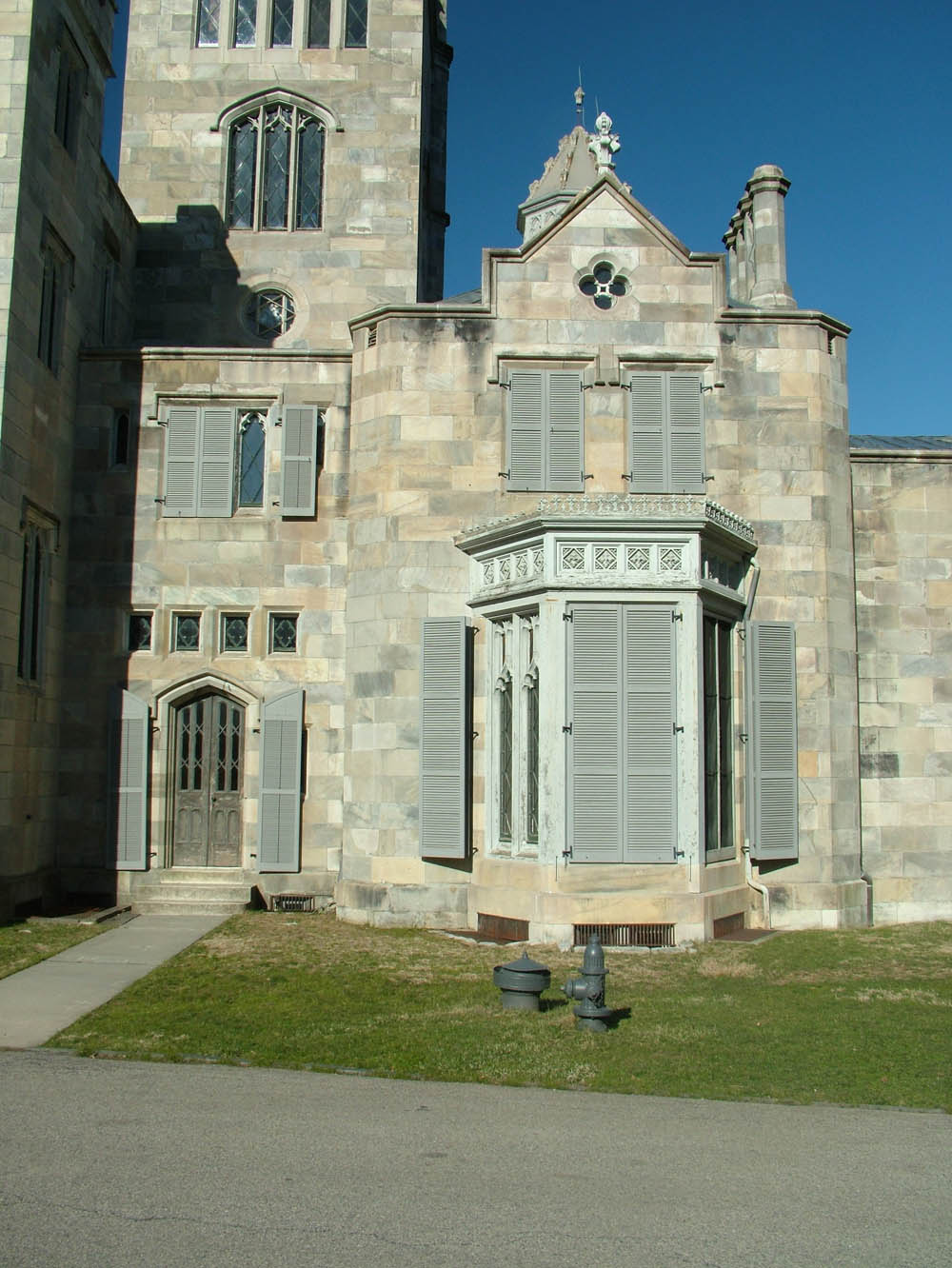 We had our meetings at Kykuit, the early 20th century Rockefeller estate, which is home to the Pocantico Center of the Rockefeller Brothers Fund. This is of course the kind of financial “angel” every historic site dreams of, but the reality is that even this site needs viable economic uses, despite having the financial support of one of America’s great fortunes. 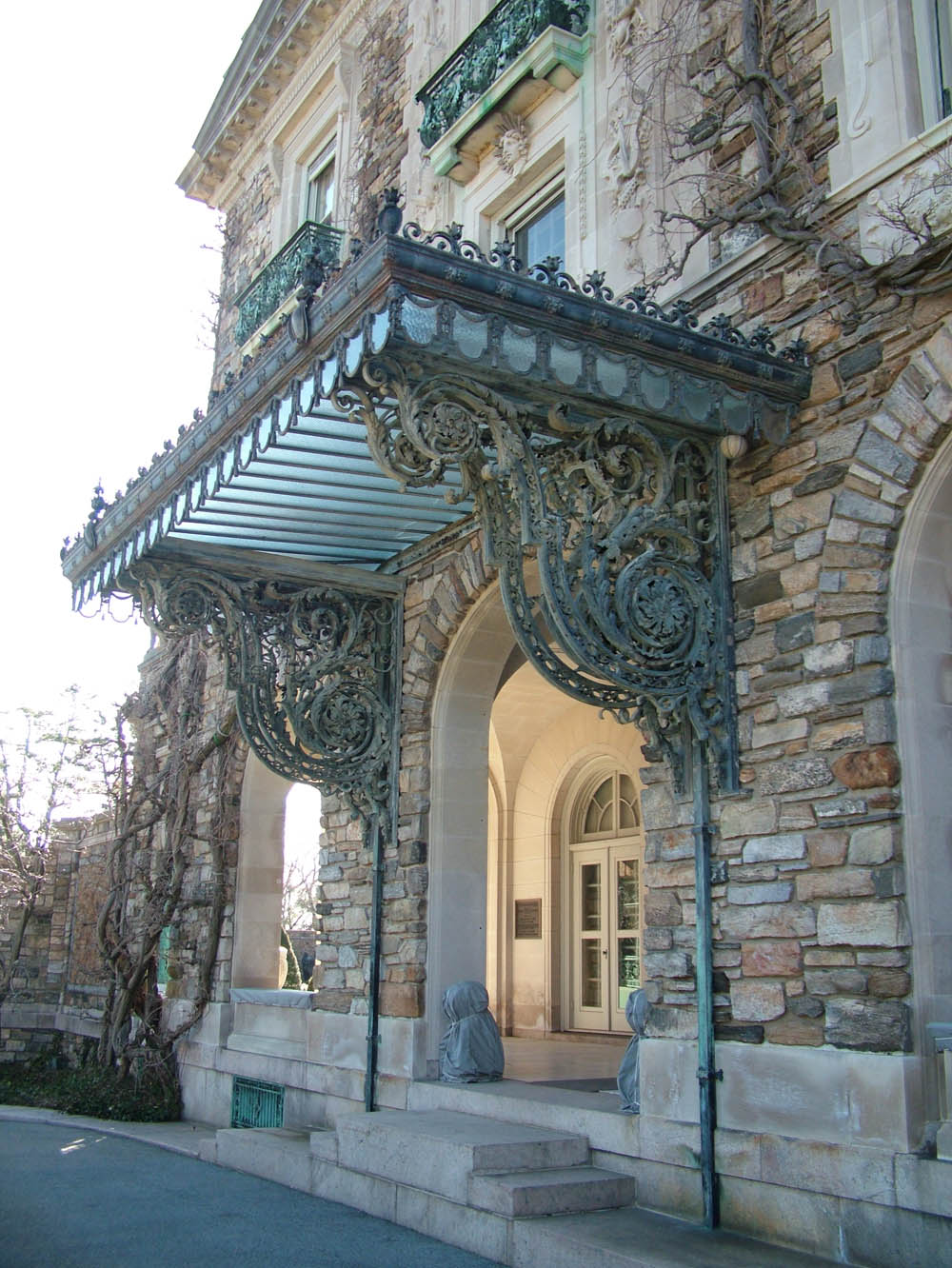 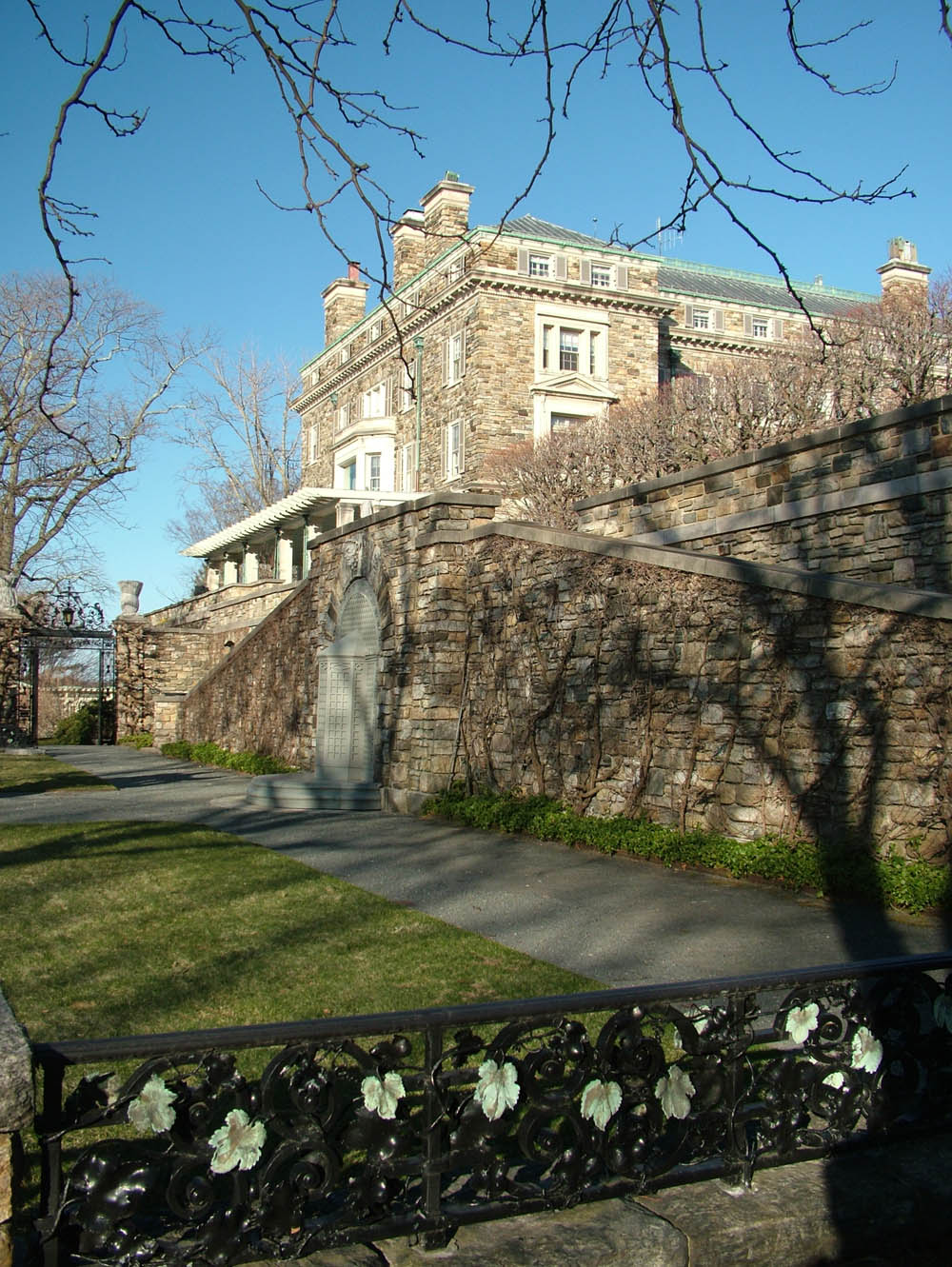 The house overlooks the Hudson River Valley and is very cleverly landscaped so that you cannot see Tarrytown or any of the other built-up areas below. You appear to be along the river, when in fact it is two miles away. 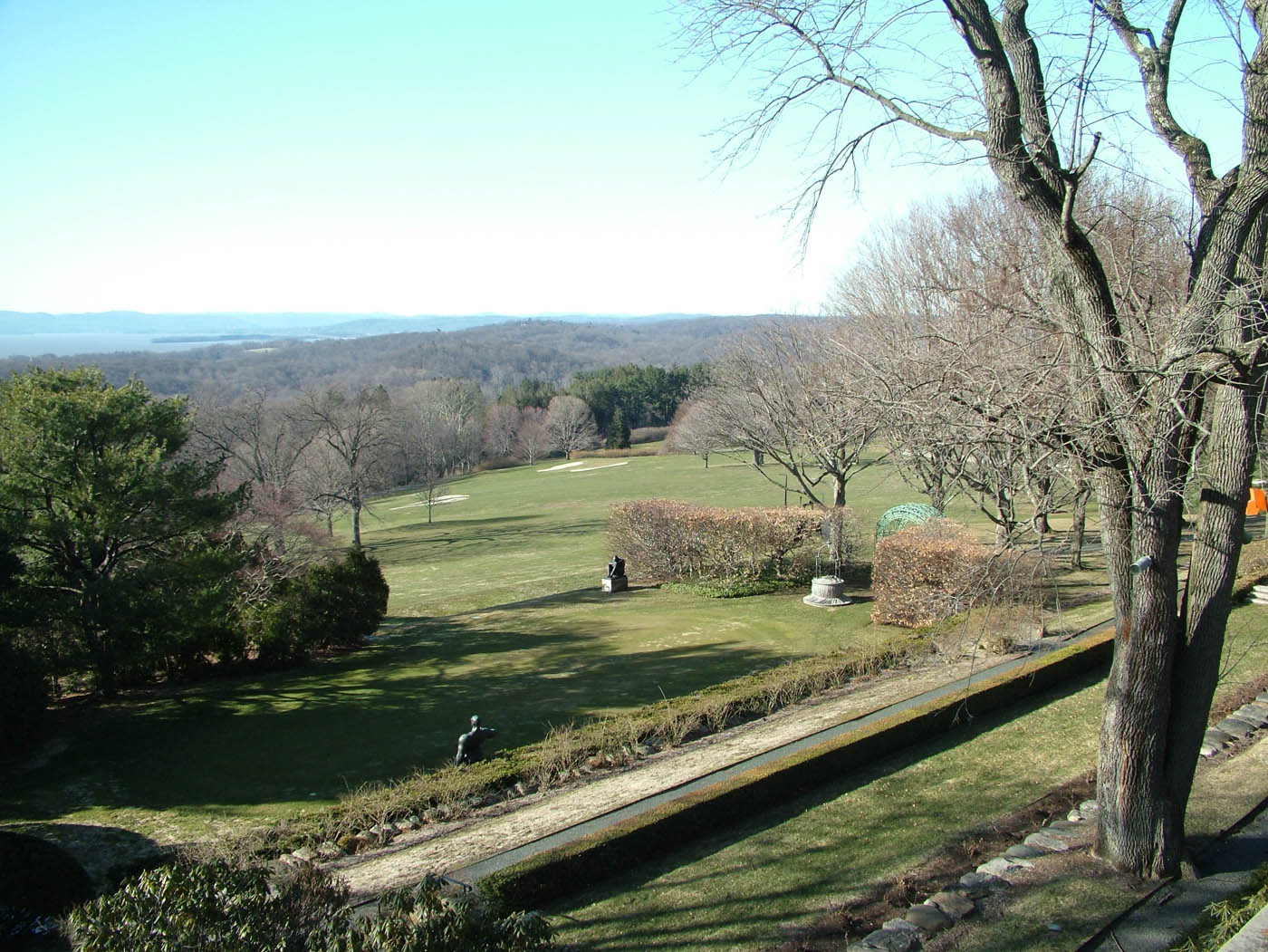 In addition to the home’s architectural expressions, which range from the slightly rustic exterior stone to the Classically rich interior decoration, there is an amazing modern art collection that includes Picasso tapestries, Warhols and Calders among others. And a very fun little cavern with Tiffany stalactite lights. 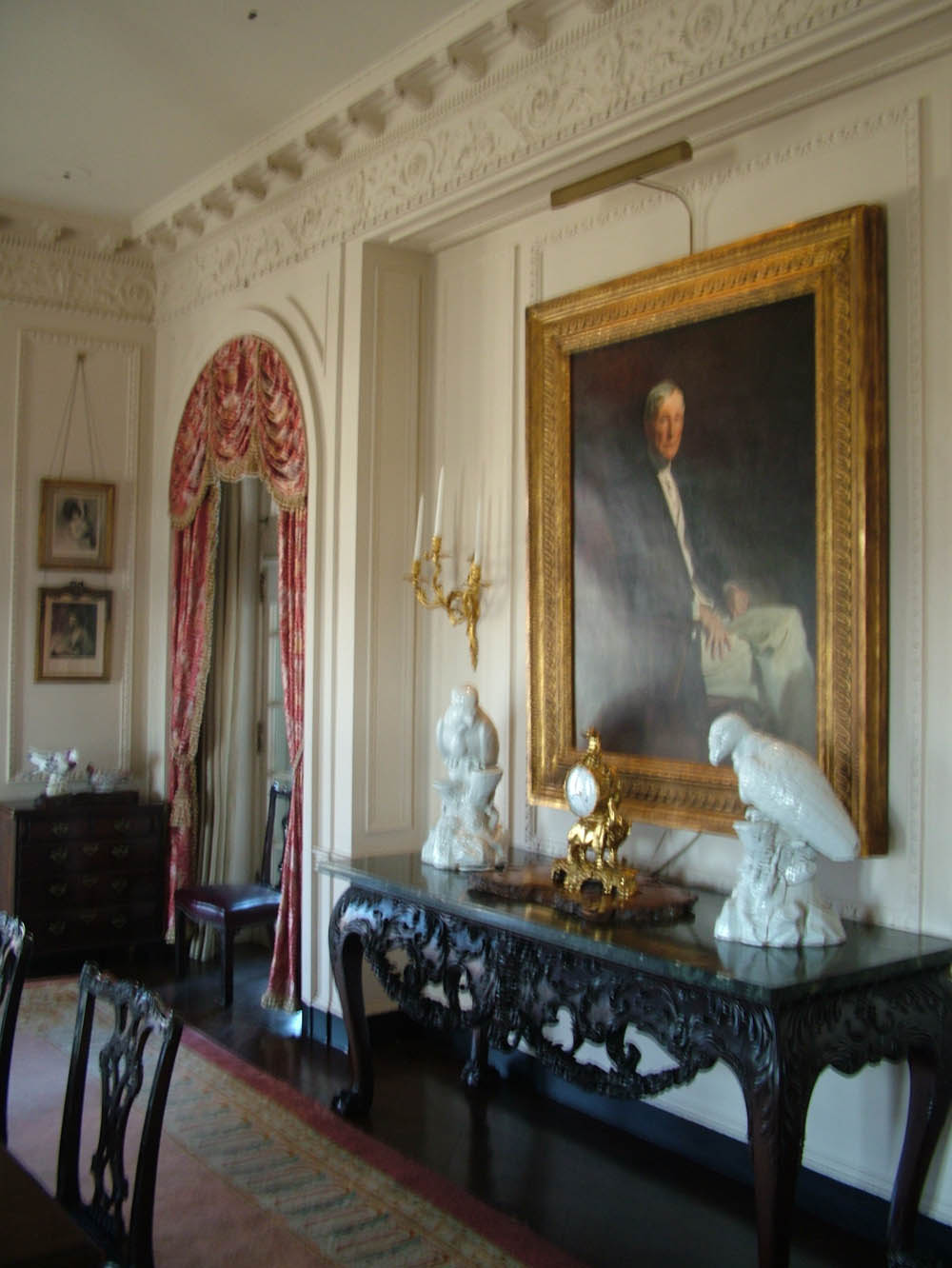 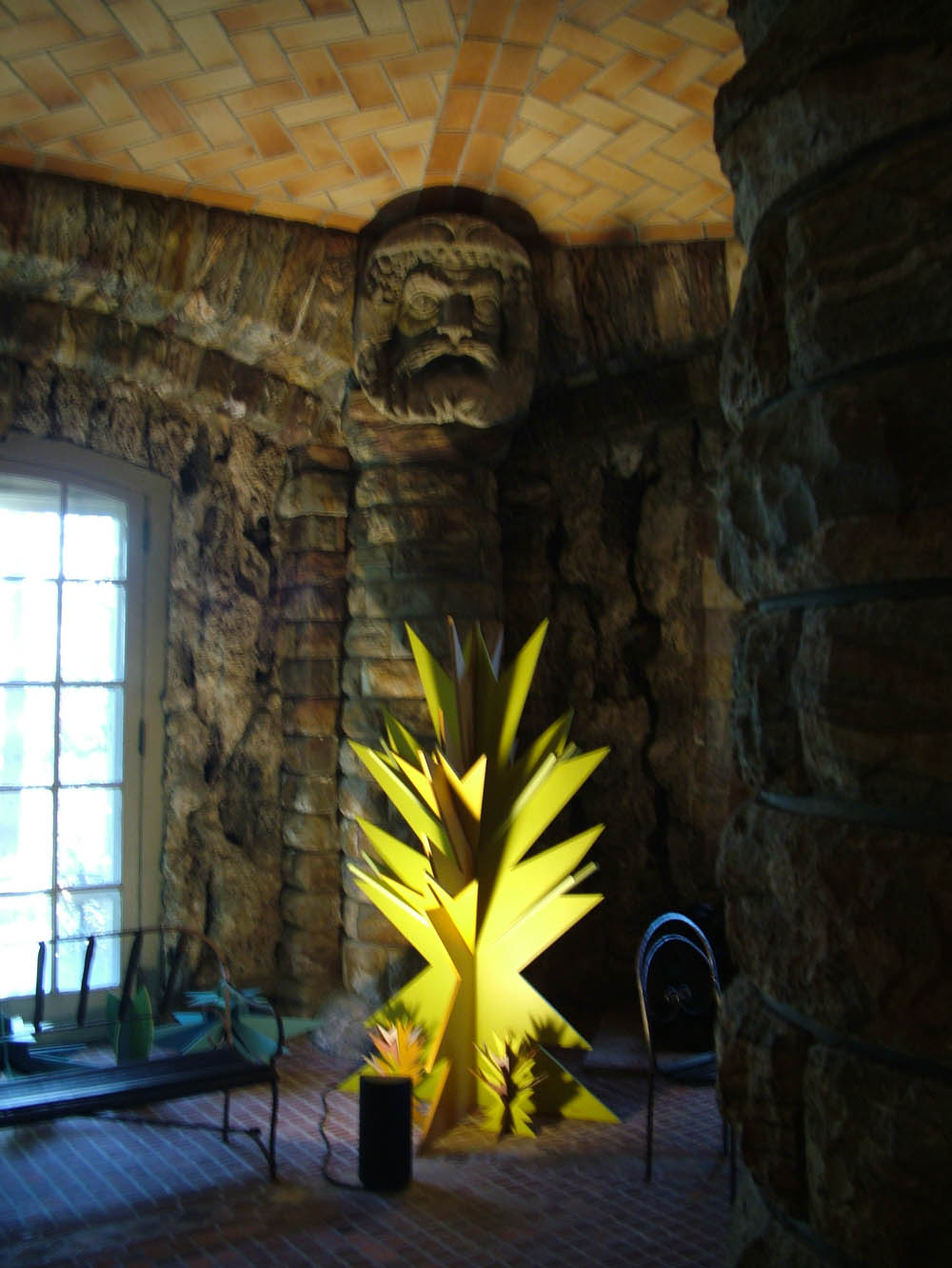 I also got the opportunity to visit the Philip Johnson Glass House in New Canaan, Connecticut, which is not far away. Johnson began discussions to give the property to the National Trust the same year he received the first Pritzker Architecture prize, in 1979. 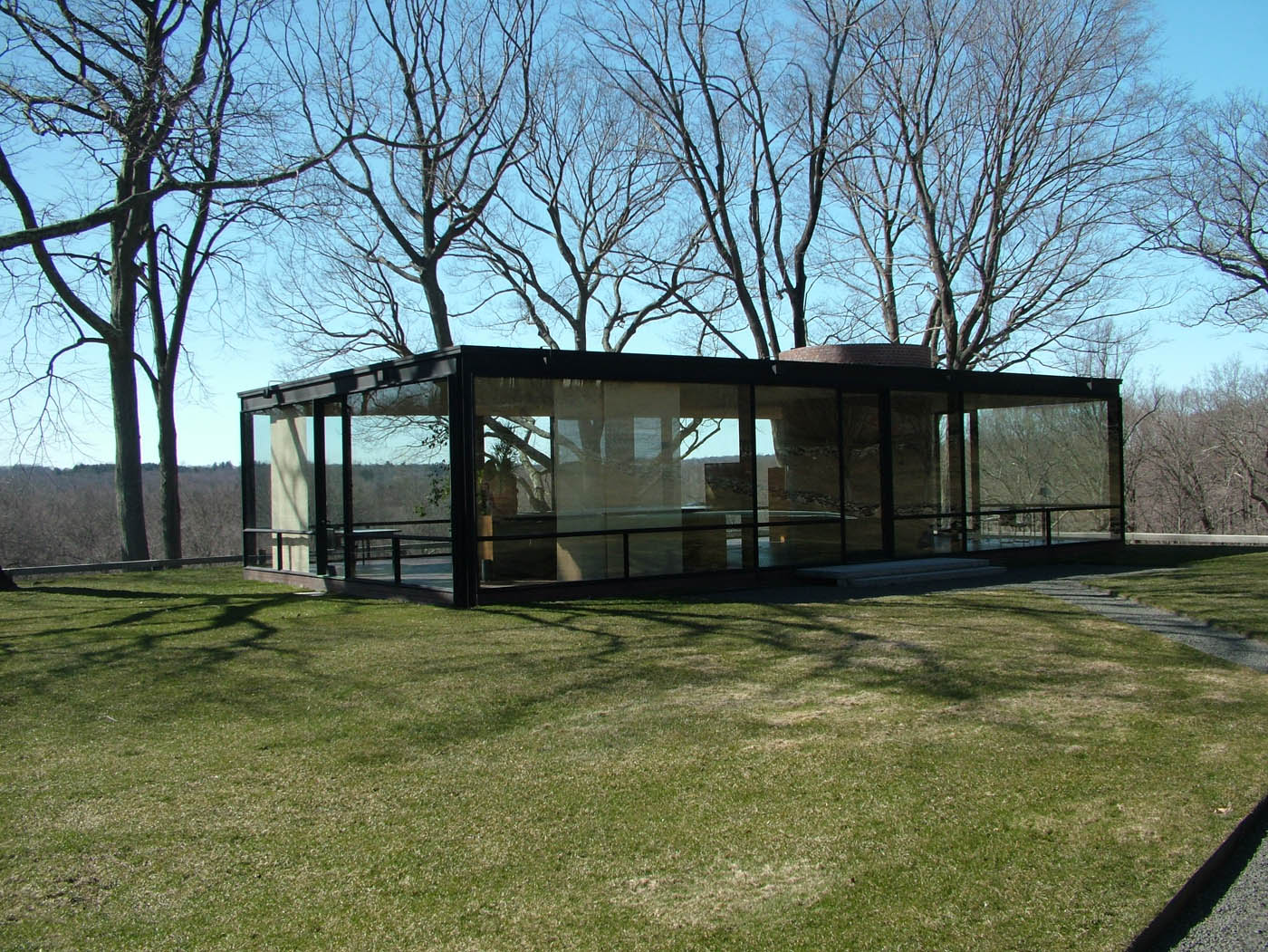 I was struck by several aspects of the complex, which includes several structures added after the 1949 glass house, all the way into the 1980s and 1990s. I like the dry stone walls all over the property, especially their contrast with the sculptural purity of much of the architecture. 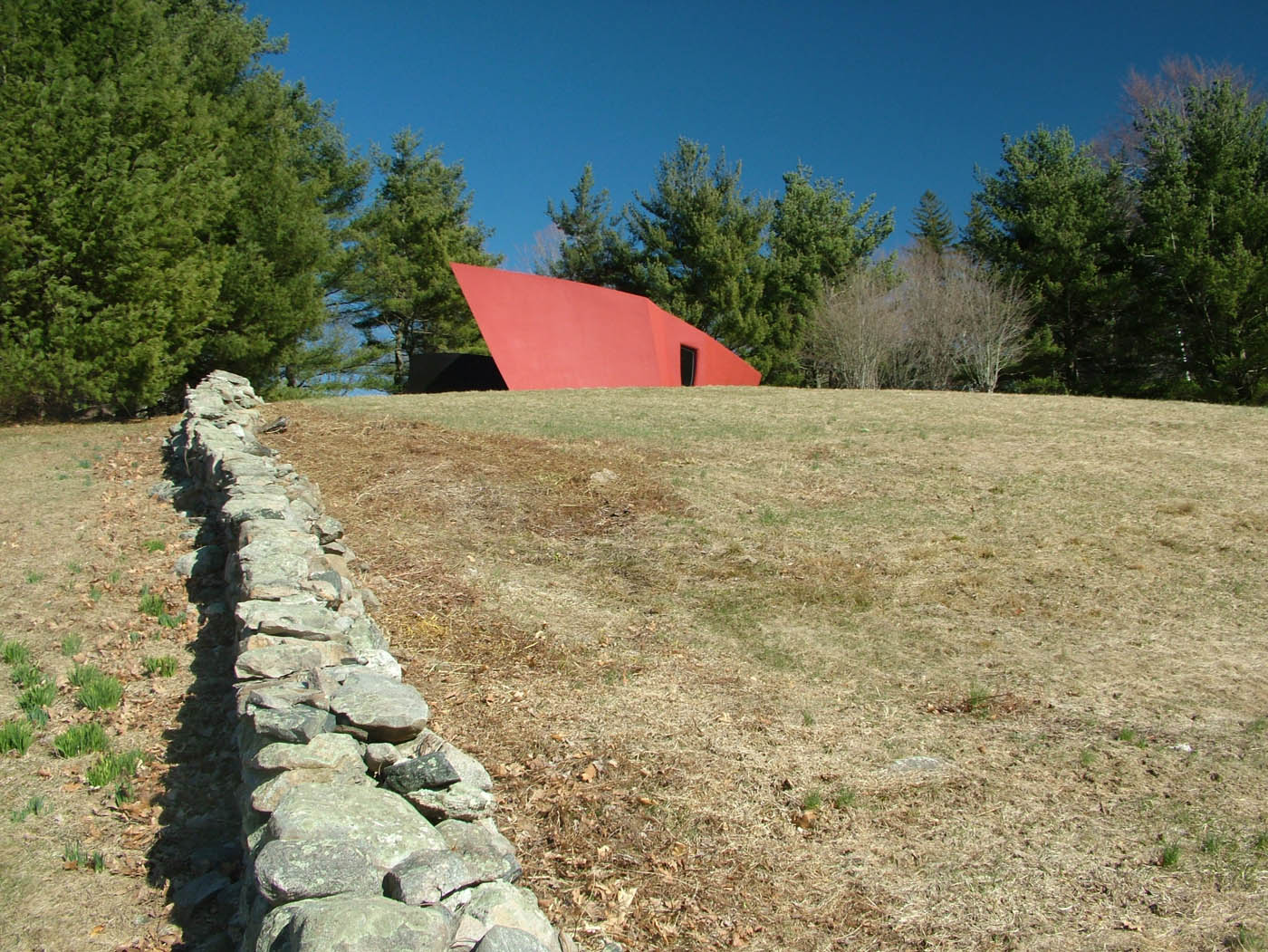 I also was struck by another landscape manipulation, more visible in the early Spring, of the trees in the vale below the promontory where the Glass House sits. They are arranged in triangular forms, to manipulate the perspective when viewed from the house and make the forest seem deeper. 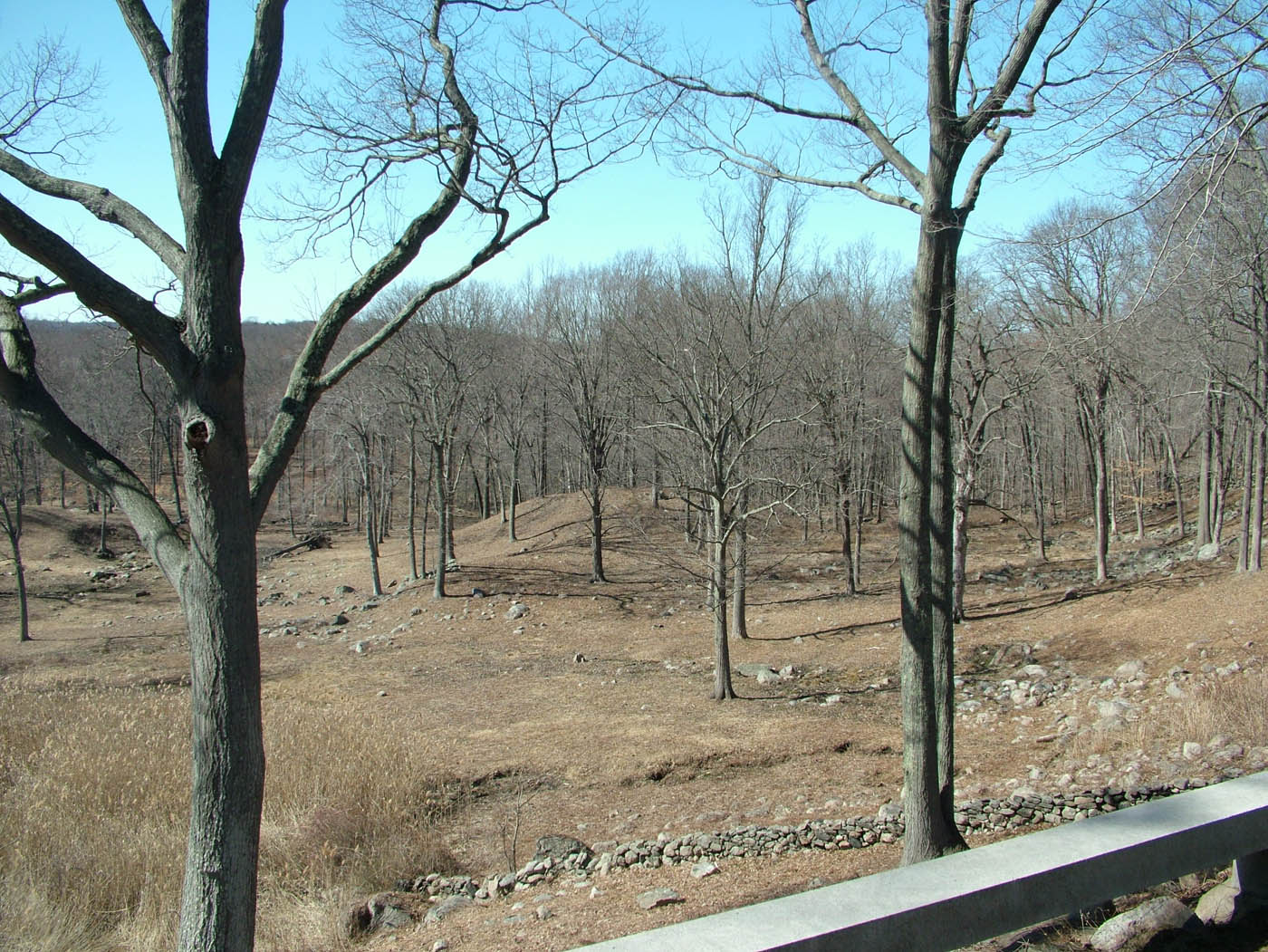 And even though it is very different than the Farnsworth House Mies was designing at the same time, I was struck by the similarities. Yes, it is black steel on the ground, not white steel on stilts, and the rectilinearities are all balanced by circular forms in the central bathroom, the nearby pond, the brick house windows and the Donald Judd concrete sculpture. 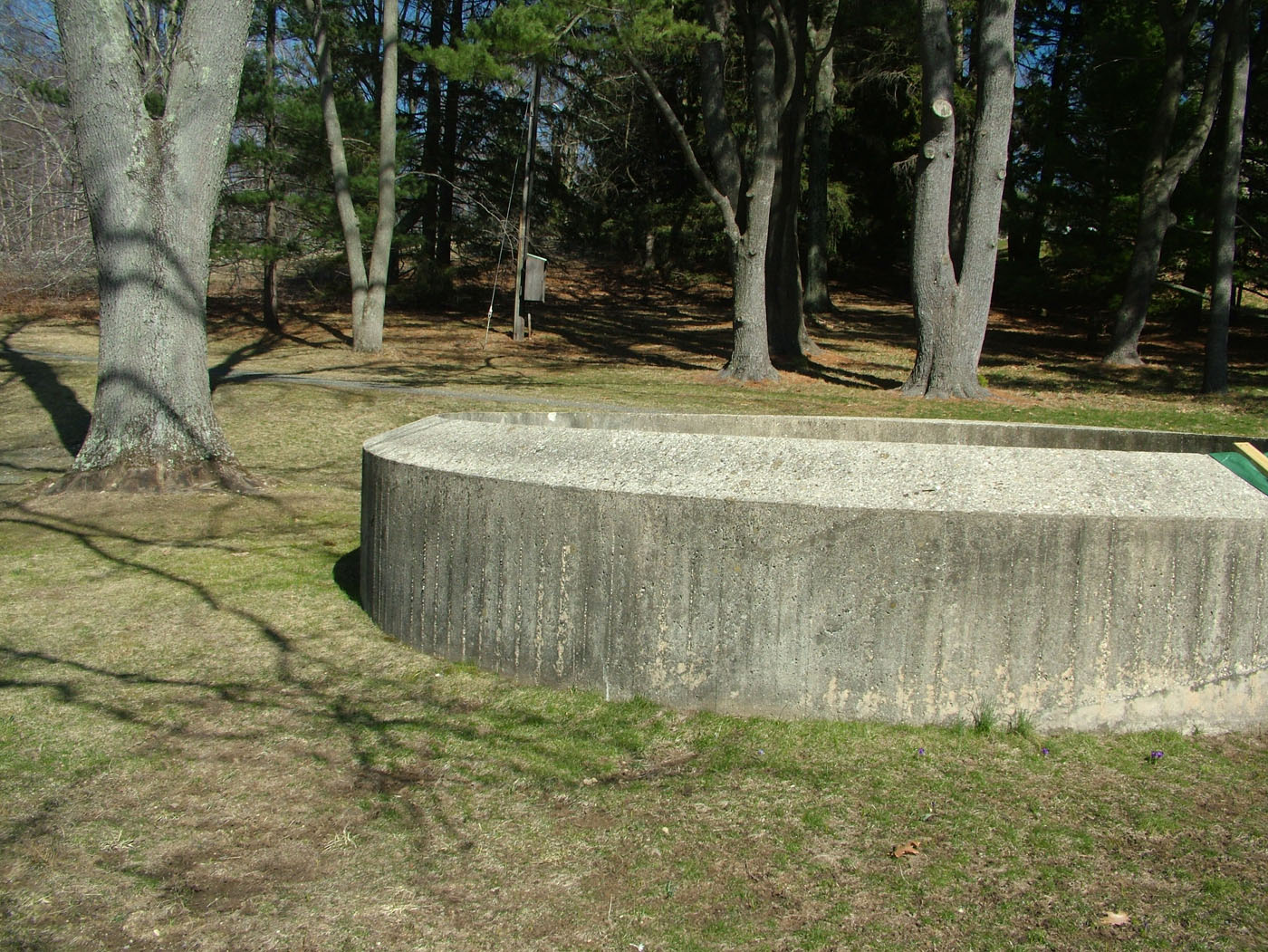 Maybe it is that the house, like the Farnsworth House, is about bringing the site inside, about making the natural world the setting for the architecture, about volume rather than mass. It is also that the Glass House has basically the SAME furniture, designed by Mies. 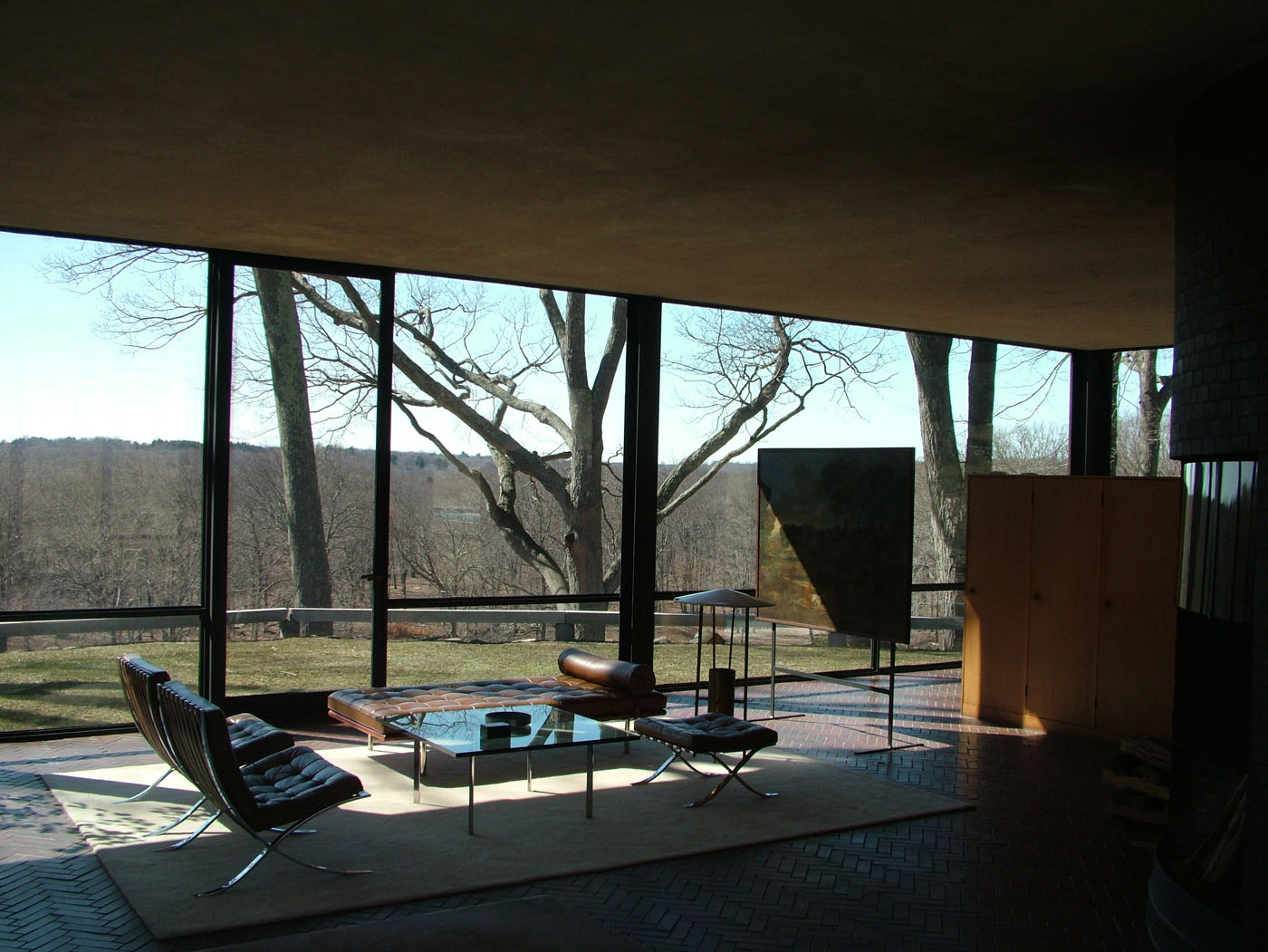 There is also a lot of art there, in the subterranean painting studio replete with Schnabels and Stellas and Rauschenbergs and a sculpture building with more Stellas, Heizer and even Bruce Naumann among others. 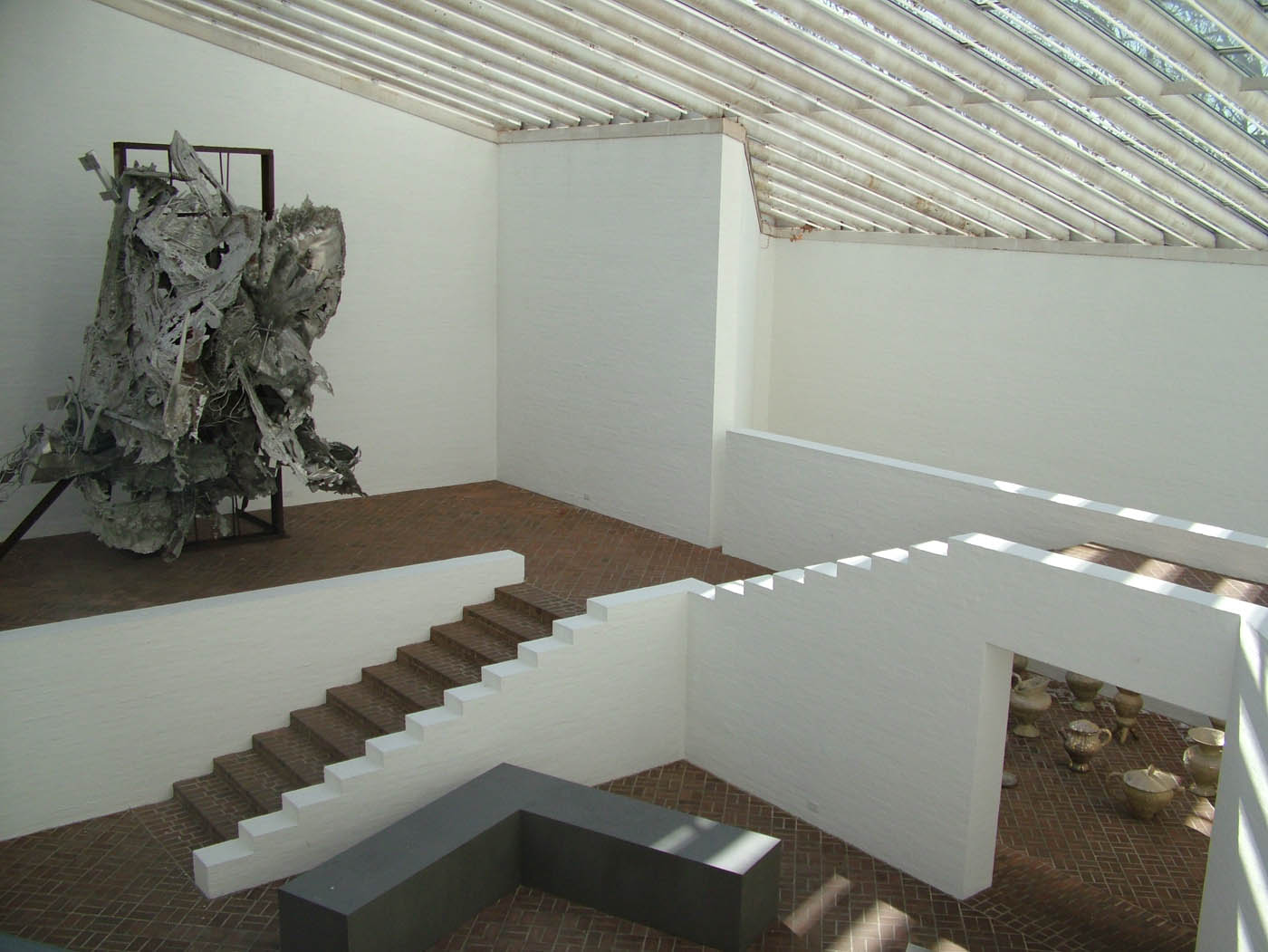 The more you look at architecture, the more you see the similarities and connections. When I first saw the Farnsworth House, my reaction was: It’s a Greek Temple. Not because it was a mimetic copy of a Greek Temple, but because the forms and colors and play of light gave the viewer the same feeling as a Greek Temple, that contrast between Nature and Culture. 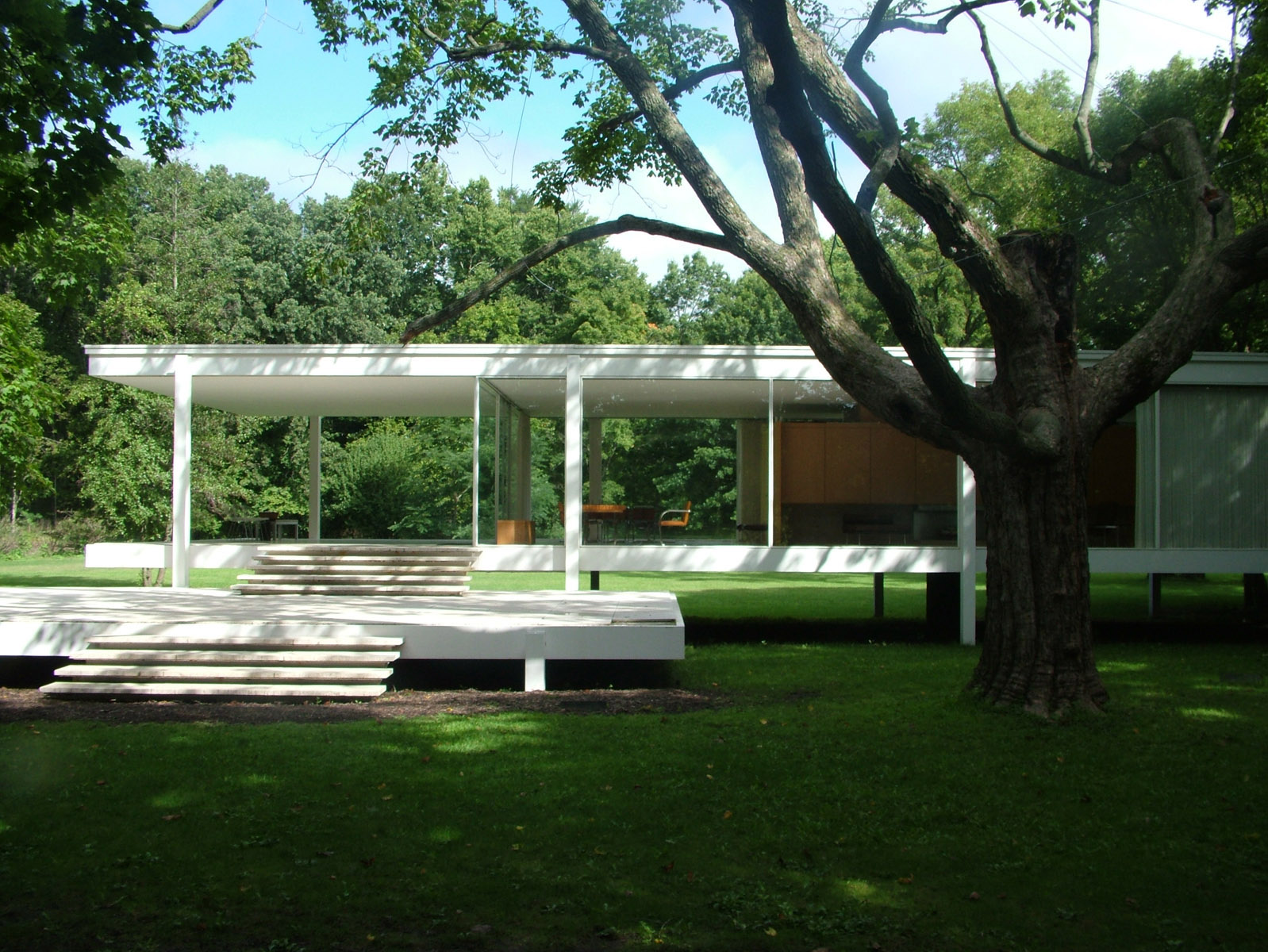 The Glass House does not feel like a Greek Temple, and I suppose I would have to experience it in more seasons and conditions, but seeing it right after Kykuit was a sort of revelation because a glass wall and a stone wall are very different but perhaps not opposites, because both are trying to conventionalize and communicate from natural forms, one by employing the stone in a naturalistic fashion and the other by letting you see through and assemble the stone and trees yourself on the canvas of a glass wall. 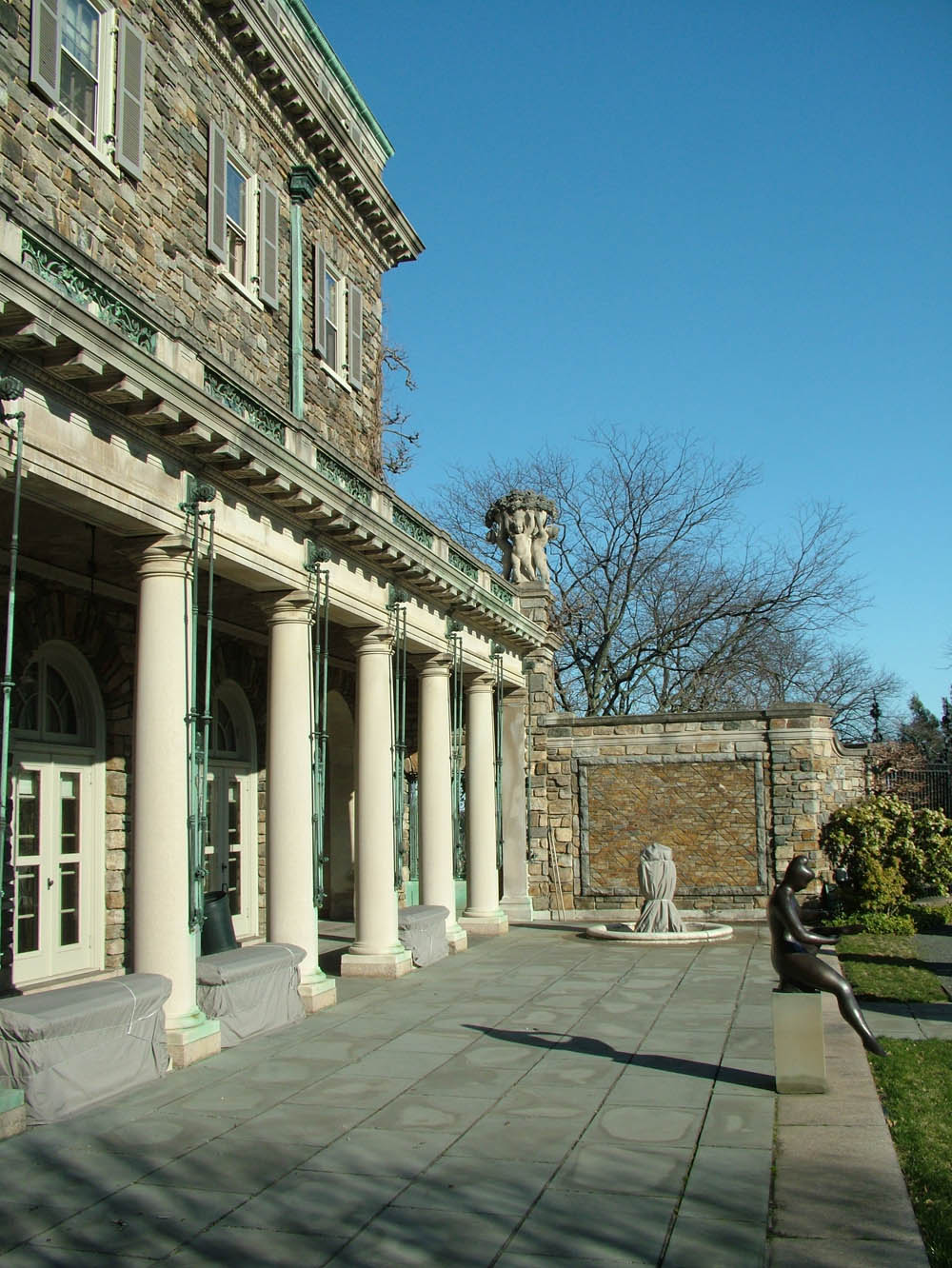 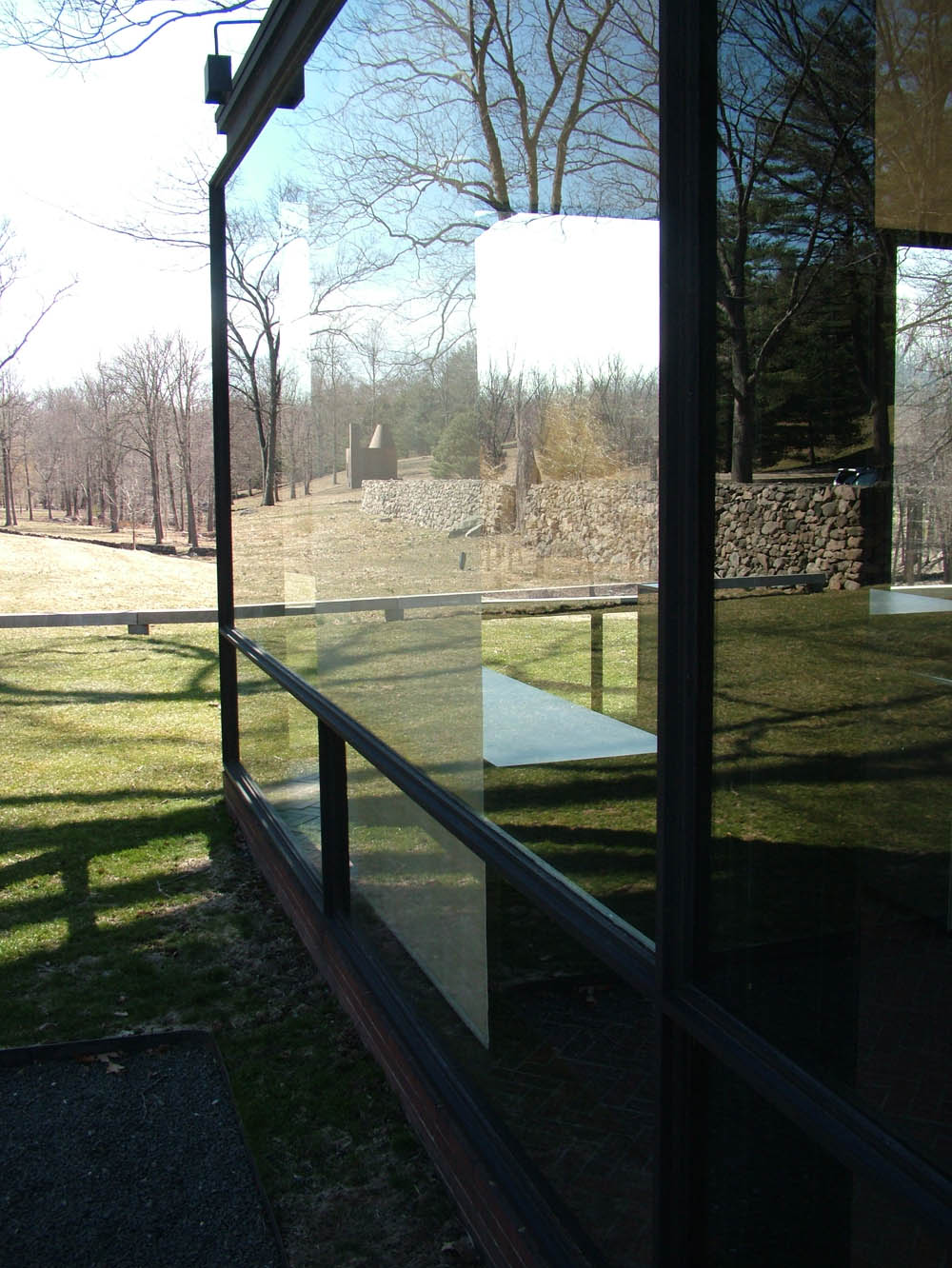 I will be seeing more National Trust Historic Sites this Spring and I can’t wait!

Thursday Update: Paper announced today (But Whitney French told me two days ago) that “Superman” will be filming in Plano, IL, home to the Farnsworth House. The Man of Steel and the House of Steel and Glass!

One Response to :
Lyndhurst, Kykuit and Glass House