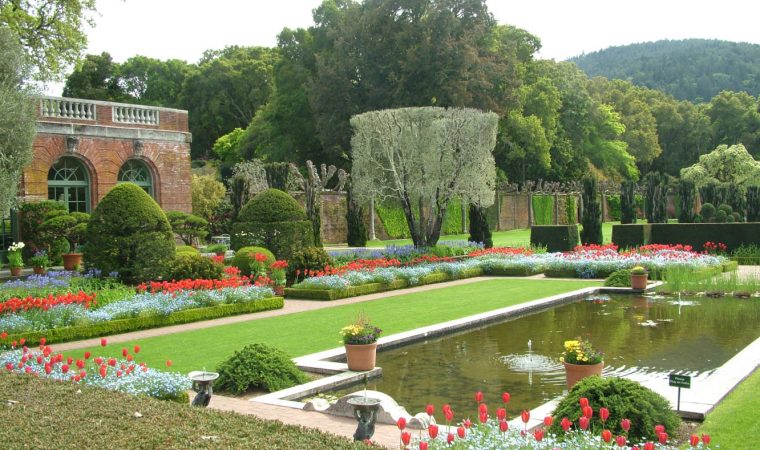 A month ago I posted about visiting three National Trust historic sites on the east coast, and last week I was on the opposite coast visiting our California sites, Filoli in Woodside, California, and Cooper-Molera Adobe in Monterey. I also got the chance to tour the famed Gamble House in Pasadena and I am including it here, since the Trust does not (YET) have a site in Southern California.

Filoli has an interesting history, insofar as its GARDENS were donated to the Trust by Lurline Roth in 1975, and there is still a great focus on the gardens, which cover some 16 acres and employ over 1,300 volunteers! There is also a successful garden shop and the site has maintained that attraction for Bay Area residents. 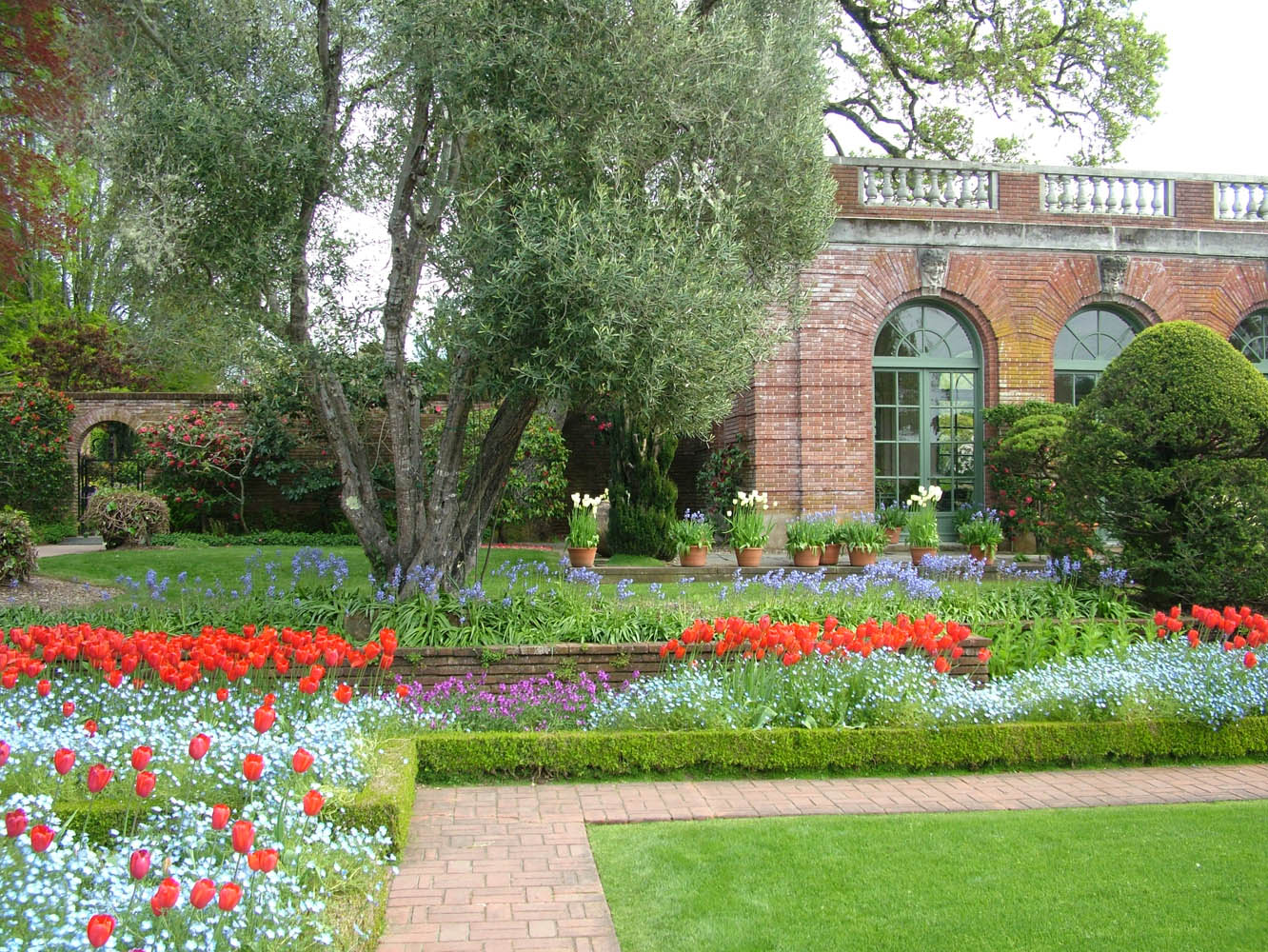 In 1978 Warren Beatty decided to film a part of “Heaven Can Wait” in the house itself, a massive 1923 red brick Georgian Revival with a blue ballroom to die for (which happened to be the primary set used for the film.) The ballroom features murals depicting both the Bay Area and Ireland, where the Bourn family vacationed. 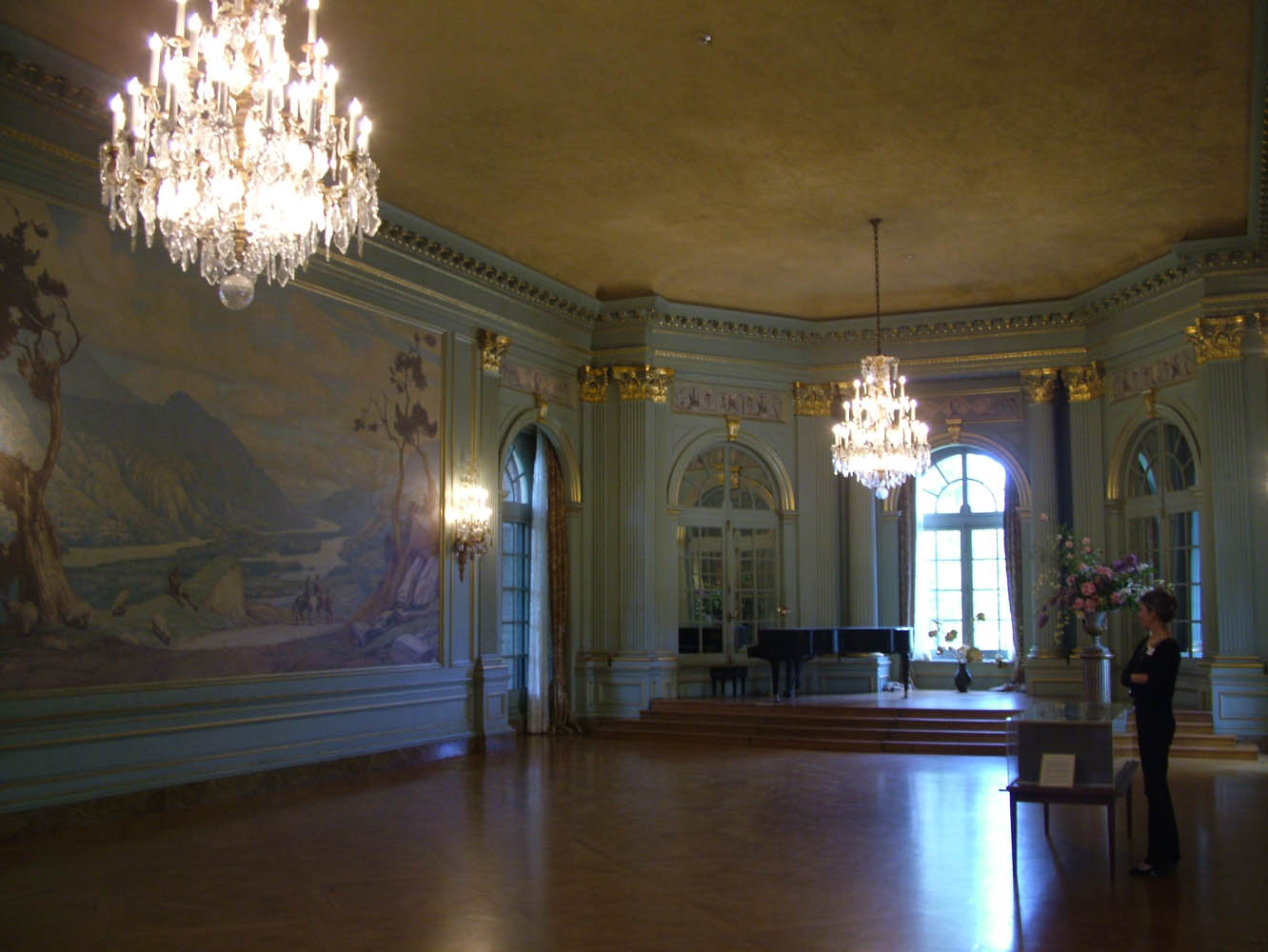 The house is somewhat limited by very traditional “velvet ropes” interpretation, although given the quality and quantity of 17th and 18th century English antiques (plenty of chinoiserie – California is LOUSY with Chinoiserie!) the ropes are a necessary evil. As we begin to conceptualize 21st century historic sites, our goals are to increase their visibility, utility and vitality within their communities; maximize their potential as entrees to the National Trust and the preservation movement, and make them economically viable. If they aren’t viable as historic sites, they may well need to go back into the private market. 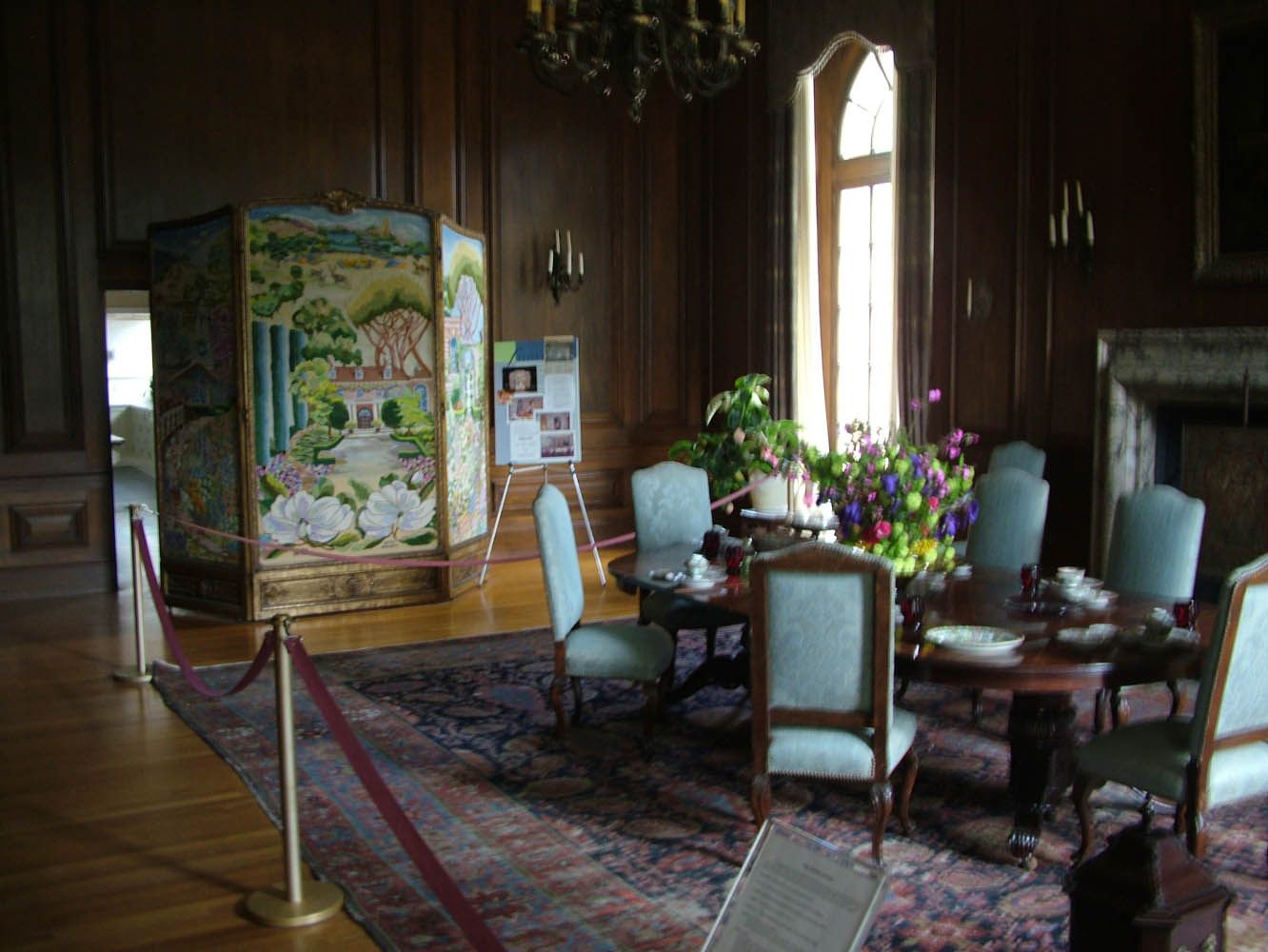 One idea for Filoli is to open it up more on the weekends when cyclists travel through the valley. A small concession offering drinks and snacks to the cyclists who already travel to Filoli could prove an important revenue stream, and even more importantly, an engagement stream. 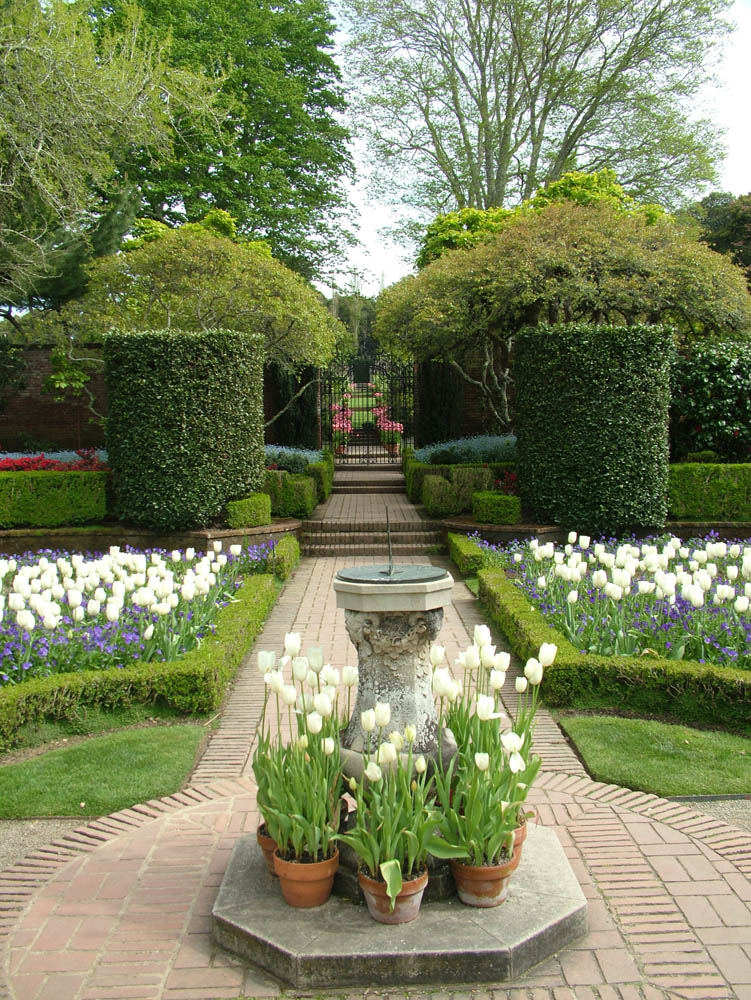 On to historic Monterey, one of the oldest historic districts in the United States (1937- same year as New Orleans!) and home to the Cooper-Molera Adobe, the only adobe National Trust historic site. The house itself is actually only partially adobe, with an addition done in kiln-fired brick. The house dates to 1830, prior to Monterey becoming part of the United States, with additions in the 1850s. 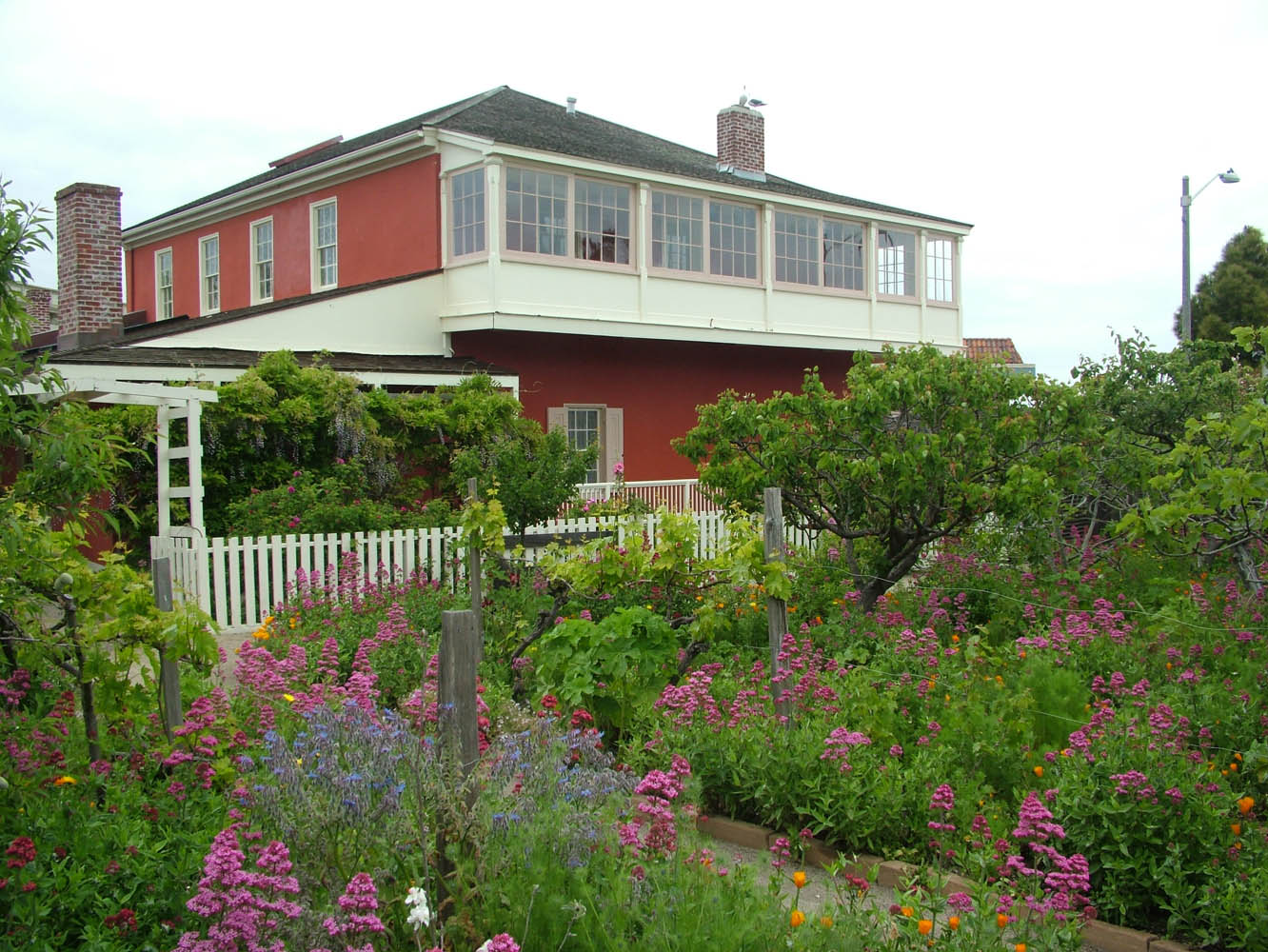 The interior is interpreted with period furnishings, again in a pretty typical “house museum” aesthetic, although that is useful for the many school groups they get. One room is preserved as sort of on-site archaeology, with exposed foundations, original deteriorated wallpaper, and the like. 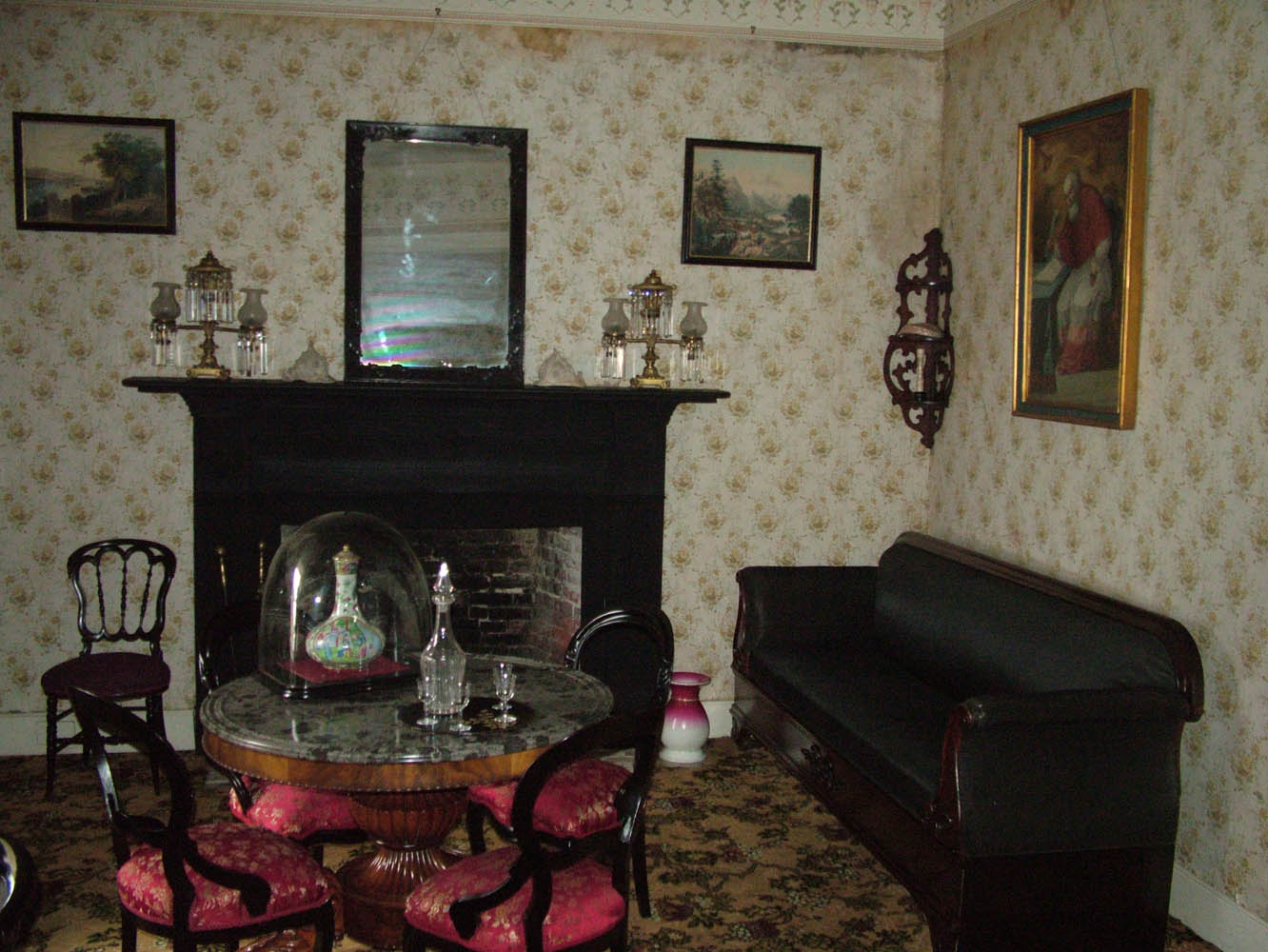 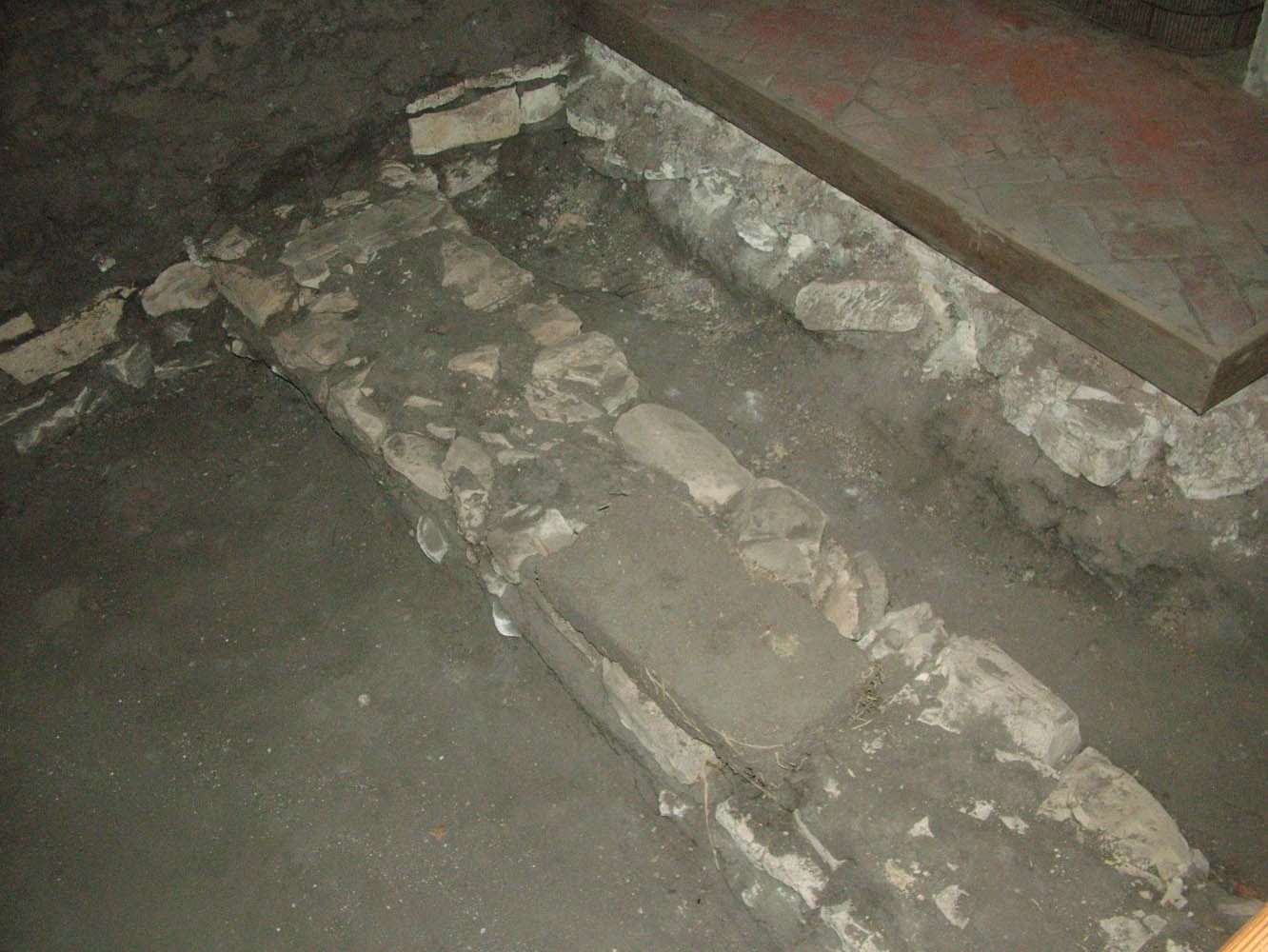 In addition, there is an “event space” that can be rented out adjacent to the house. 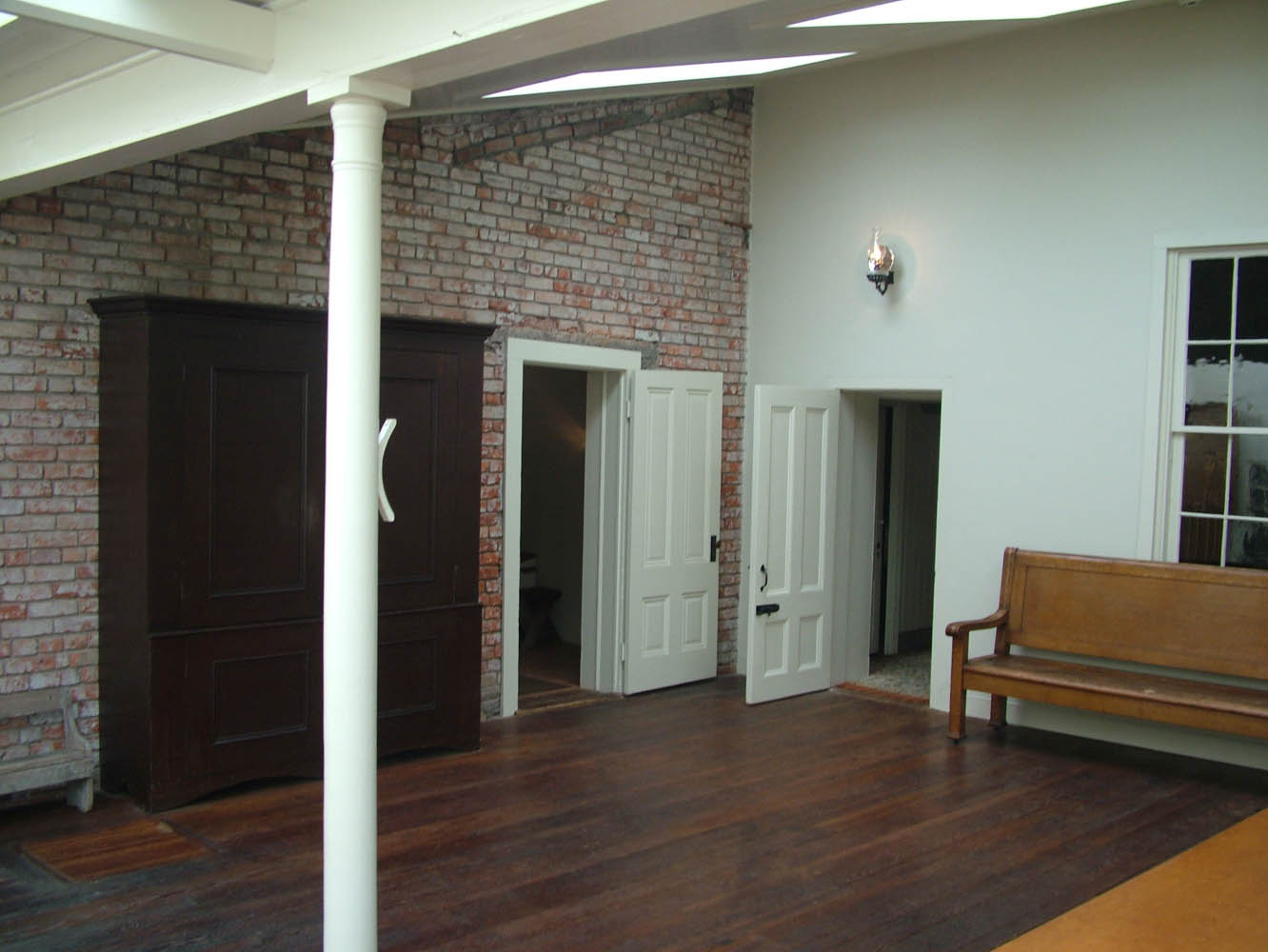 One of several outbuildings is used as an interpretive center, and there are several others that need rehabilitations, notably a large two-story barn. 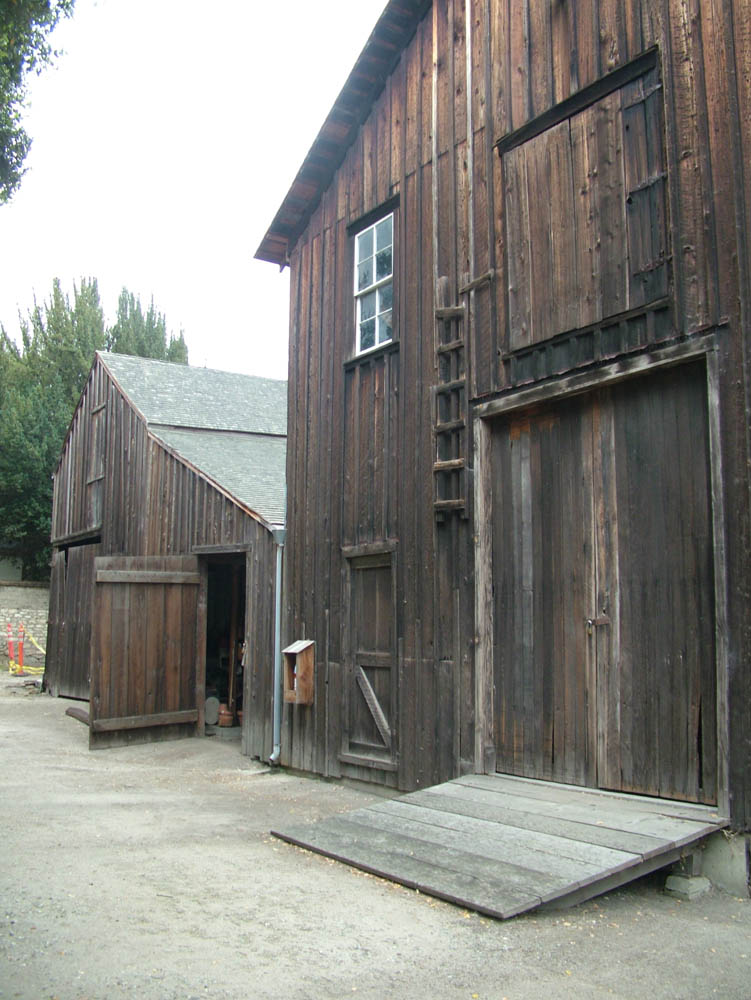 There are also gardens, planted in a manner appropriate to the 1860s, with a smaller but no less dedicated volunteer crew. The whole complex is surrounded by an adobe wall (portions have a stone base), and a lot of the site needs some rehabilitation. One idea is to lease a portion of the site to a developer, who could put in a restaurant or other business. 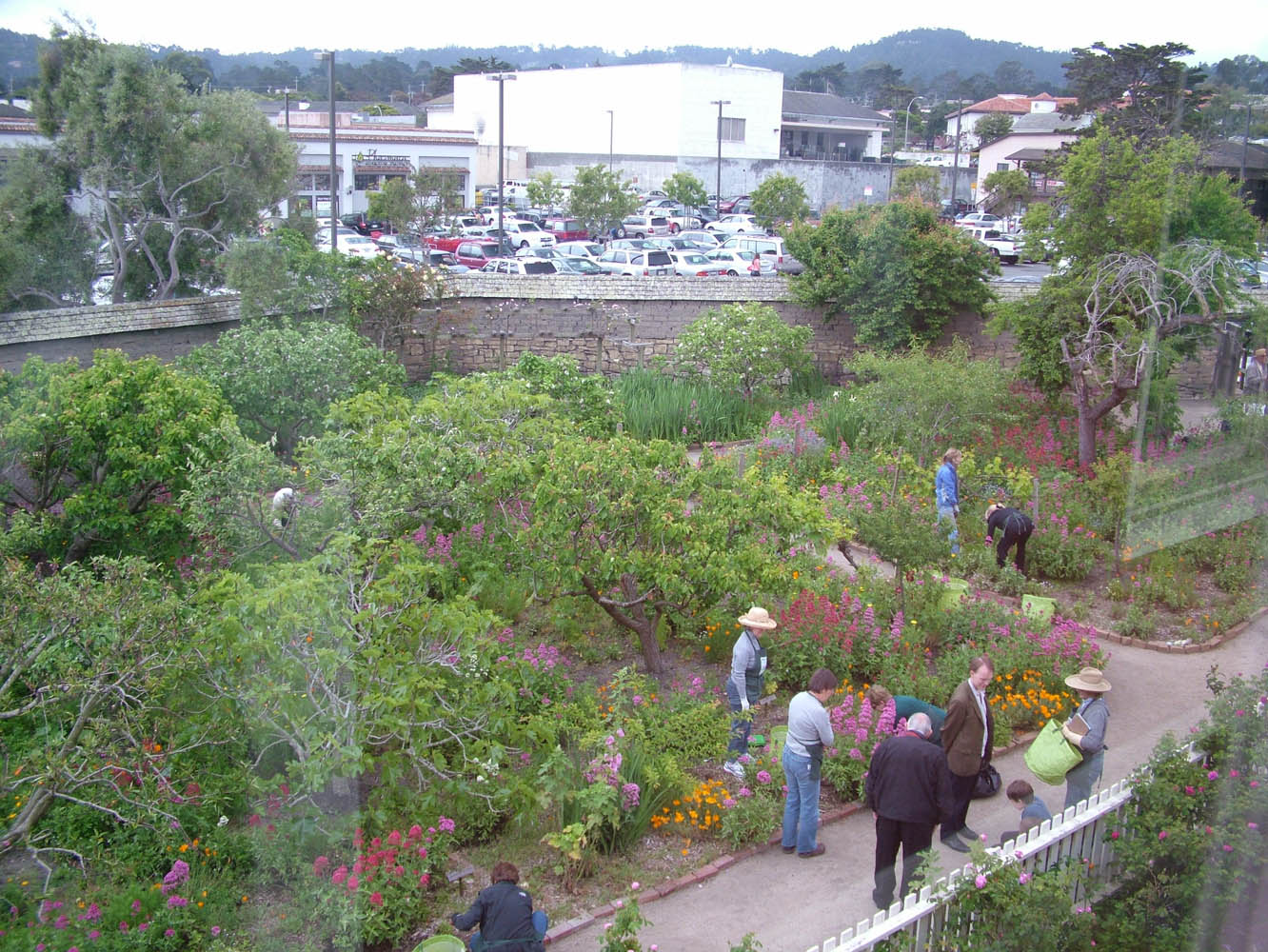 Before you get your purist knickers in a twist about that idea, consider this: that is how the site was actually used for a major portion of its history. The house, interpretive center and both barns actually front on two of Monterey’s main streets, and a painted sign on the exterior of the house replicates the commercial uses that Cooper put that portion of the house to for most of its history. So, the concept has historic – and thus interpretive – validity. 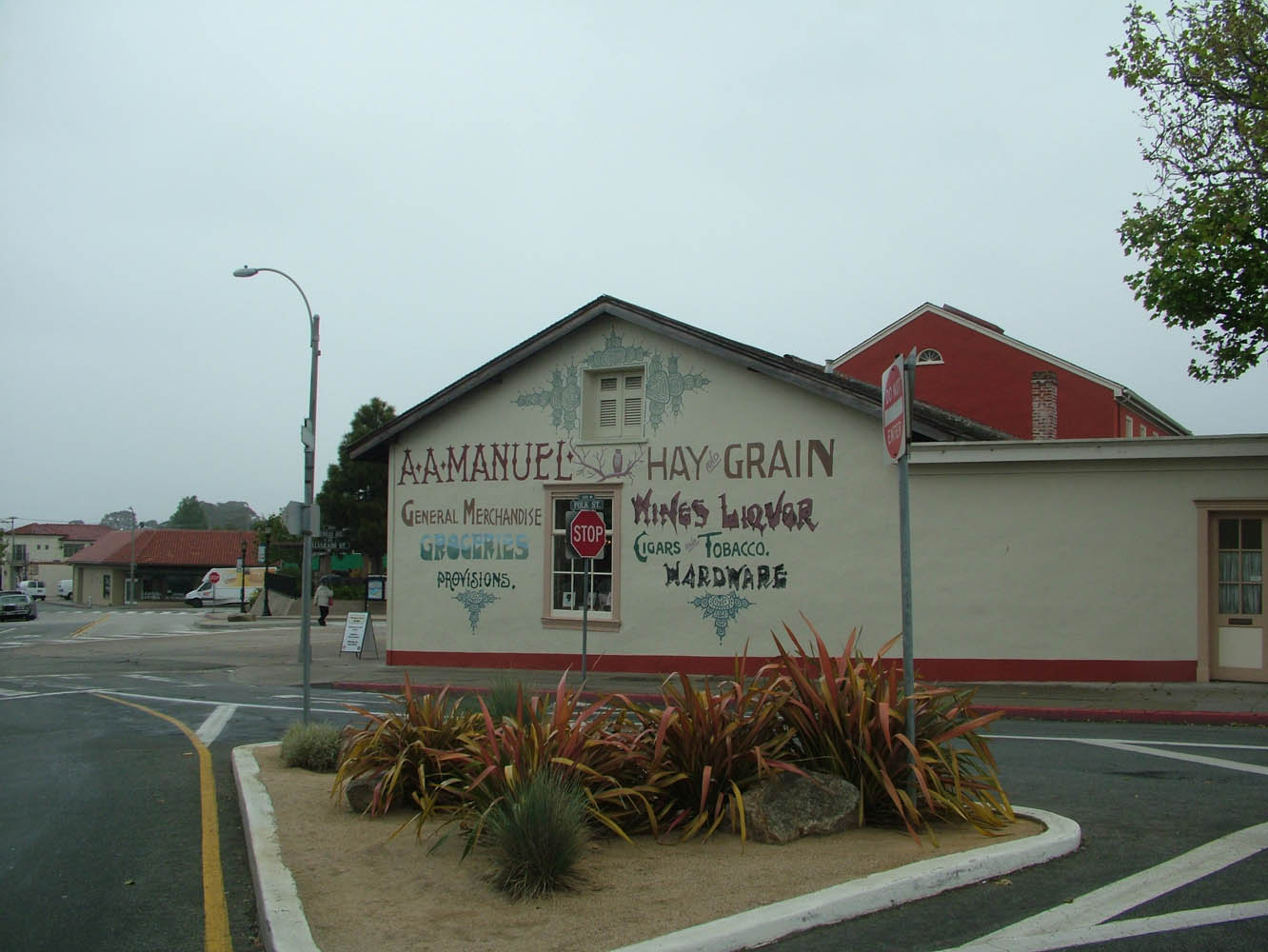 Moreover, as a site operated by California Parks, it has been effectively closed for some time due to state budget cuts. To implement the plan will require a model process and a model lease, but in so doing it could prove a national model for how to craft lease provisions that hold tenants to interpretive and rehabilitation goals – while providing the capital needed to maintain the site. Of course, the devil will be in the details: do they need to break through the adobe wall? Will some of the gardens need to be curtailed? How will the commercial uses interface with school groups and others? 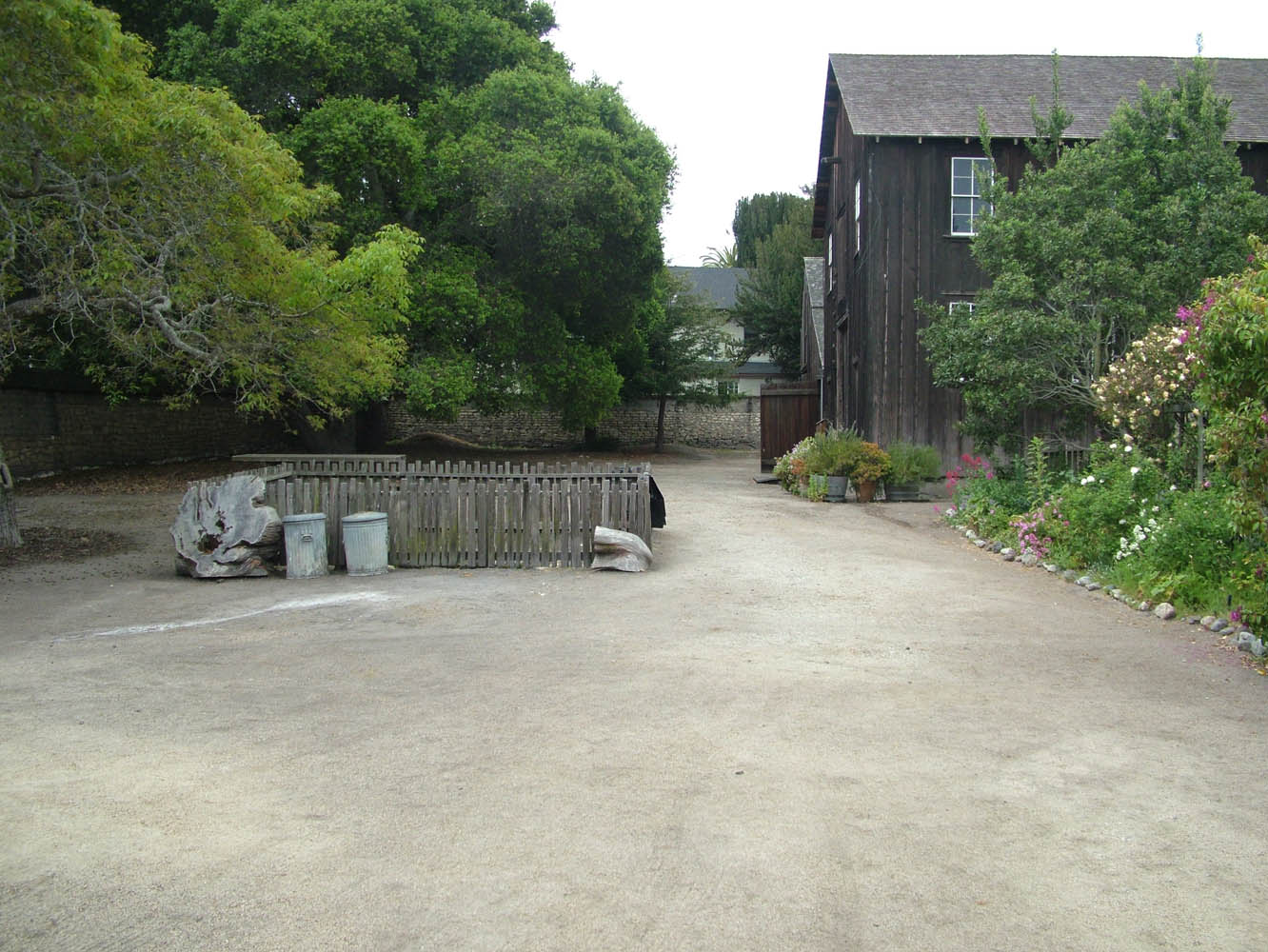 The age of the pure museum – if it ever existed – is over: Major museums have been doing overtly commercial projects and leasing to restaurants for decades. House museums have maintained the more purist anticommercial model longer. Some have the endowments or philanthropic “angels” needed to maintain this culture, but it is important to remember an economic fact I turned up in researching the history of historic preservation: The traditional house museum model NEVER EVER worked economically. Admissions have ALWAYS paid for about 20-25% of operating costs for any site. That was true in 1903 and 2003 and most times in between. 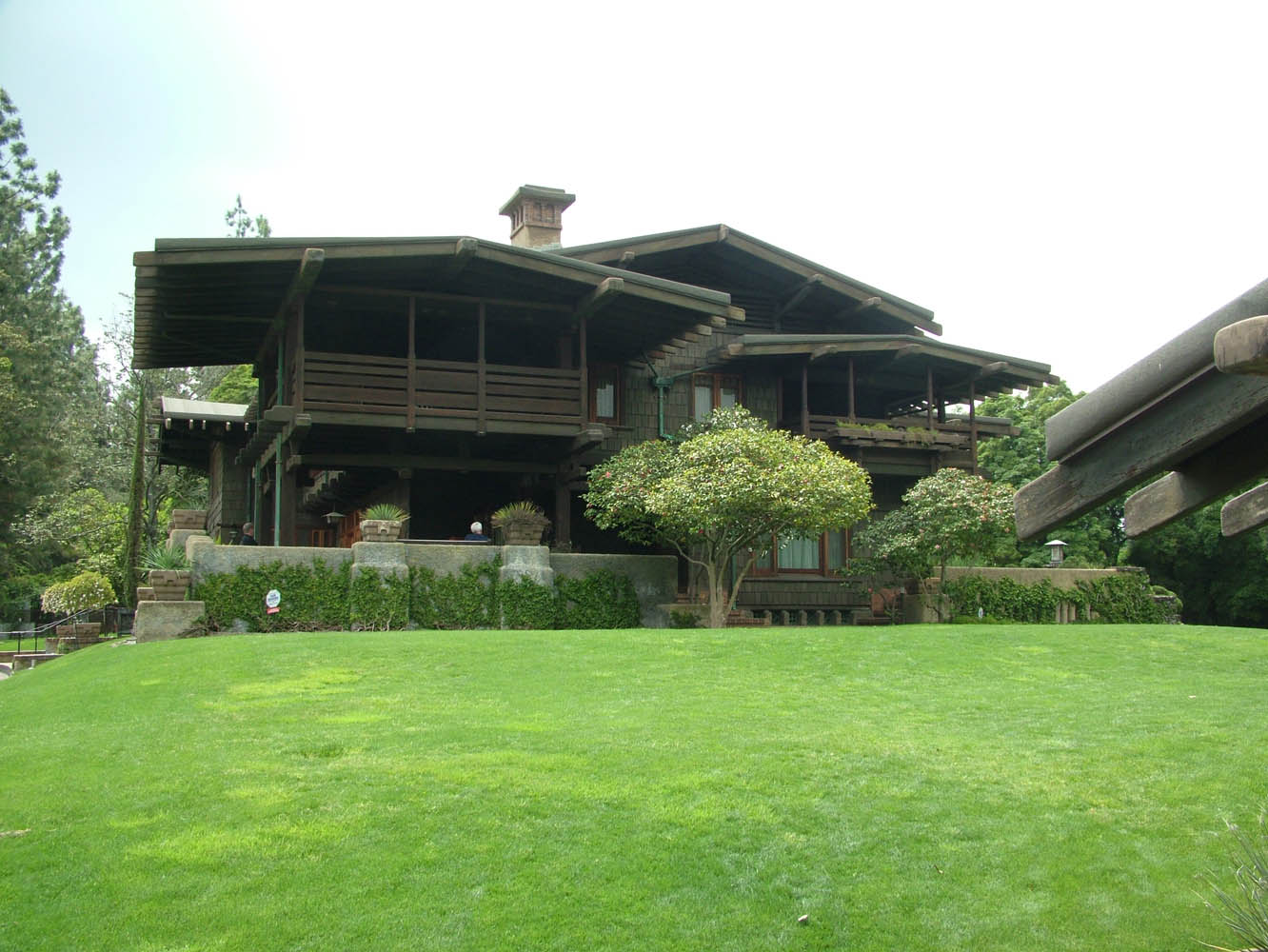 Now, on to the Gamble House. This is owned by the University of Southern California (Hi Trojans!) and is the biggest Arts and Crafts Bungalow ever, probably, with over 8,000 square feet of finely fitted and finished wood, buckets of built-ins and Stickley furniture, and a few ropes, although I think they are appropriately NOT velvet. 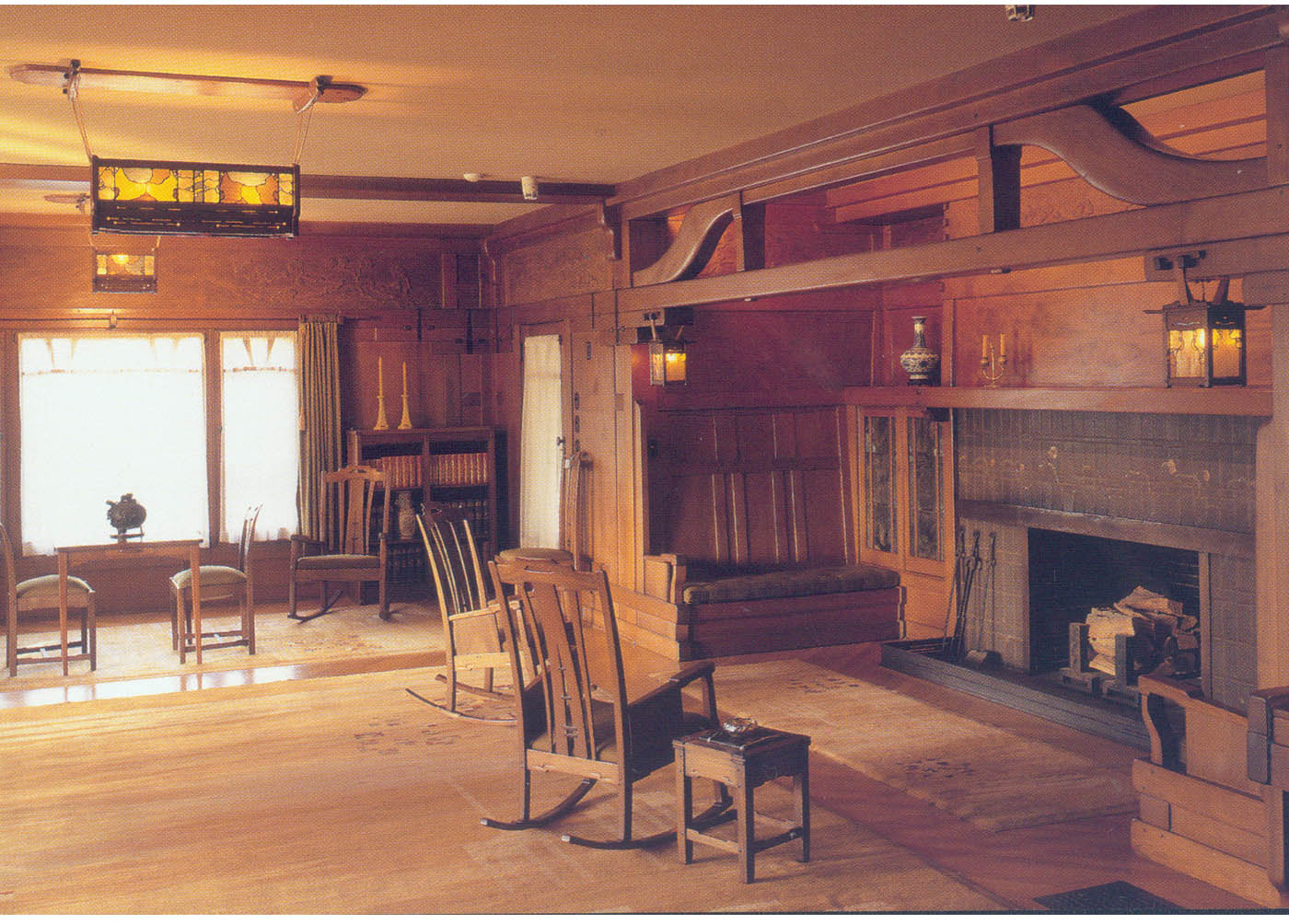 The tours are very traditional, and like at Villa Finale and other places with lots of fancy stuff, they have both a tour guide AND a minder to make sure you don’t touch the walls. They let you trod upon the carpets but warn you to avoid the carpet edges as they could fray. 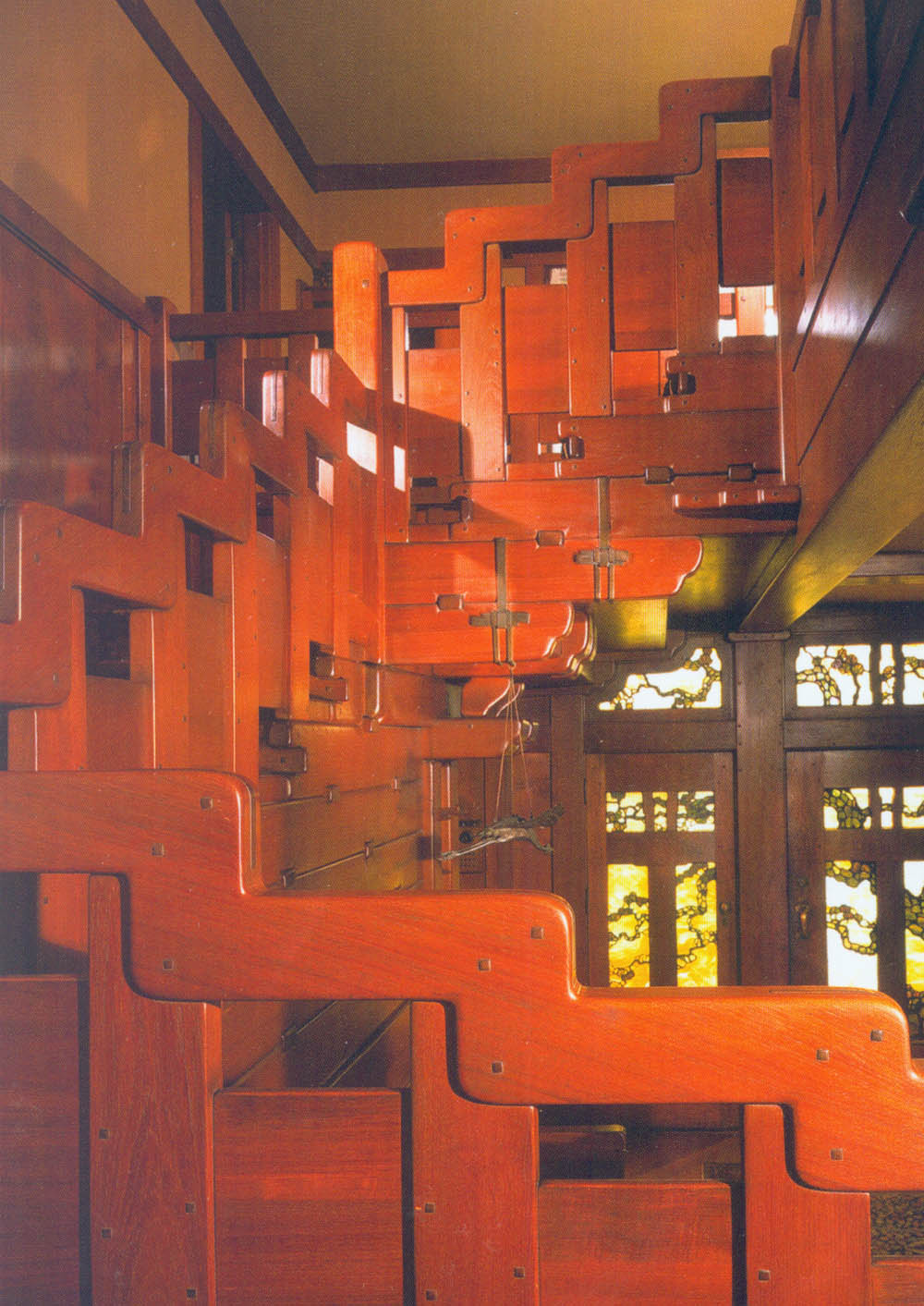 And they DO let you touch the beautiful staircase railing, which has always been one of my favorite details of the house. So I pretty much fondled the hell out of it. The aesthetic – natural woods, simple designs with Japanese influence, art glass and low, sprawling horizontality – is of course related very closely to its contemporary Prairie Style. 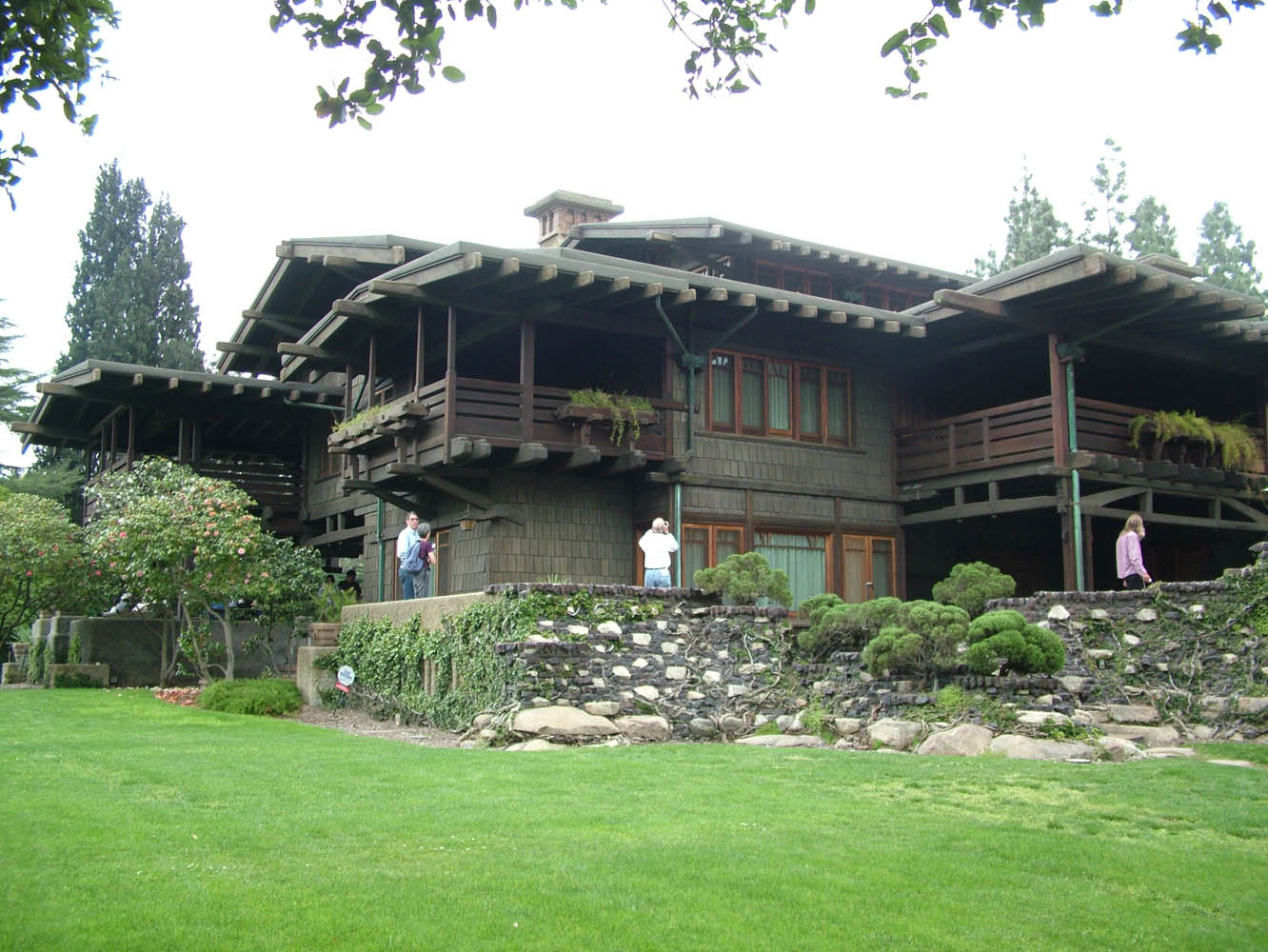 A worthy visit, and interestingly, they do utilize the house in another way: two USC students live there as caretakers. The neighborhood also has loads of other Greene & Greene bungalows of more modest dimension, and even La Miniatura, one of Frank Lloyd Wright’s textile block houses of the 1920s. 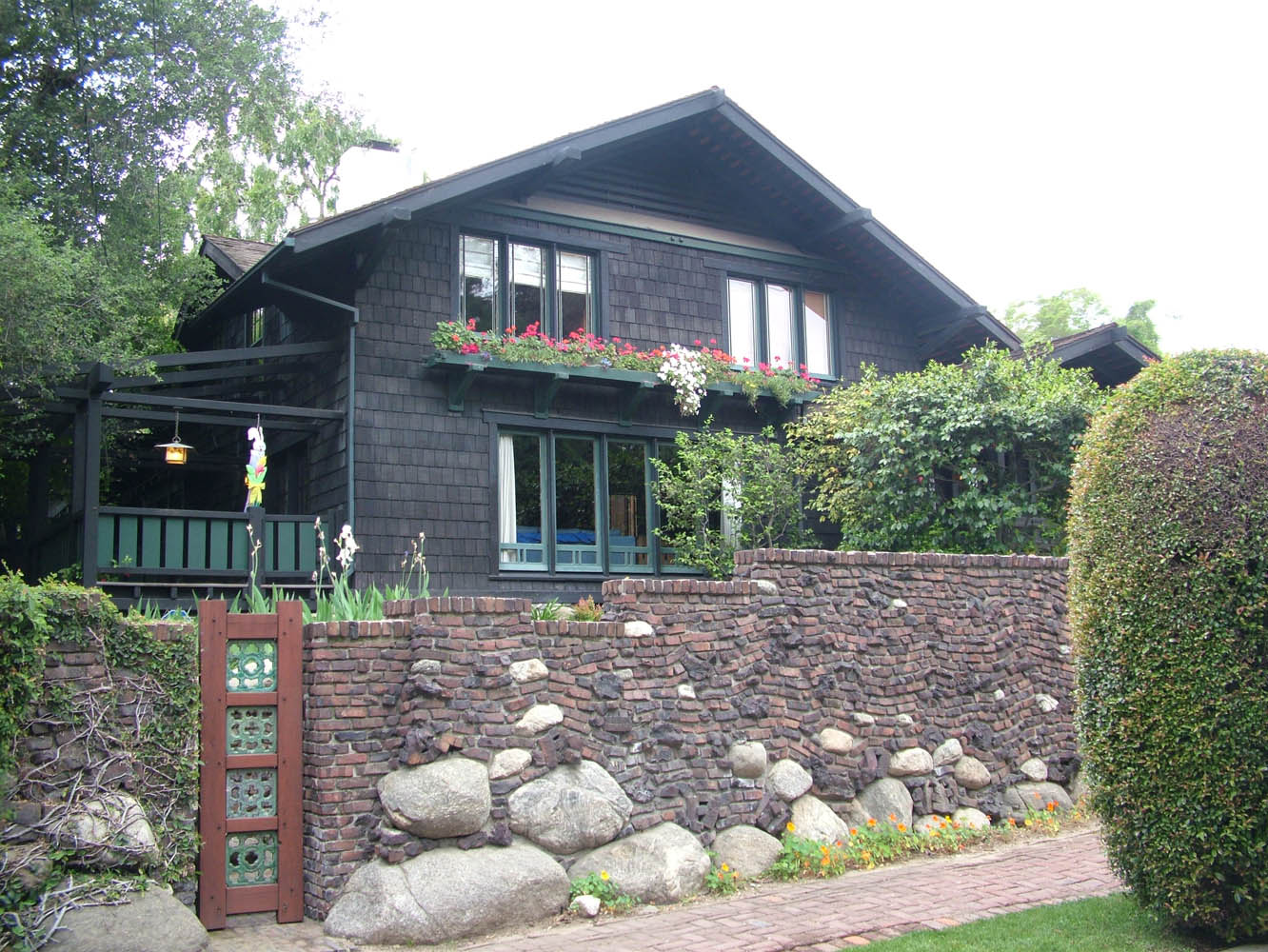 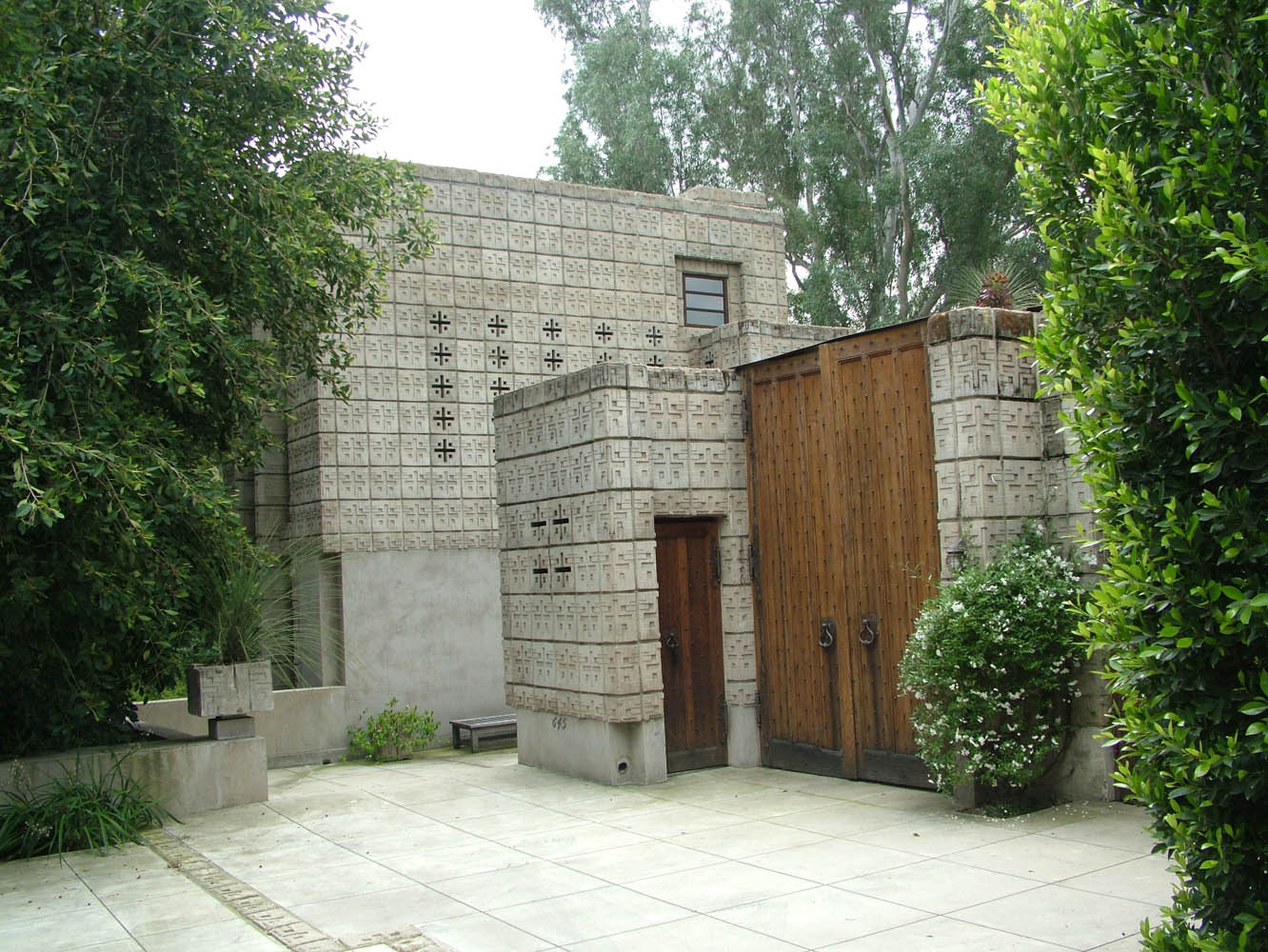 Tomorrow I am touring house museums in and around Chicago: the Dawes House in Evanston, Robie House, Glessner House and Hull House in Chicago, each with a rich architectural and social history, each with challenges economic and interpretive (and you know already that I think Hull House does some of the most exciting interpretive efforts in the country) but I have to say that the response to the tour has been overwhelming – they had to add a third date to keep up with demand. But that doesn’t mean you can pay for a house with tour admissions.

5 Responses to :
Filoli, Cooper-Molera Adobe, and the Gamble House