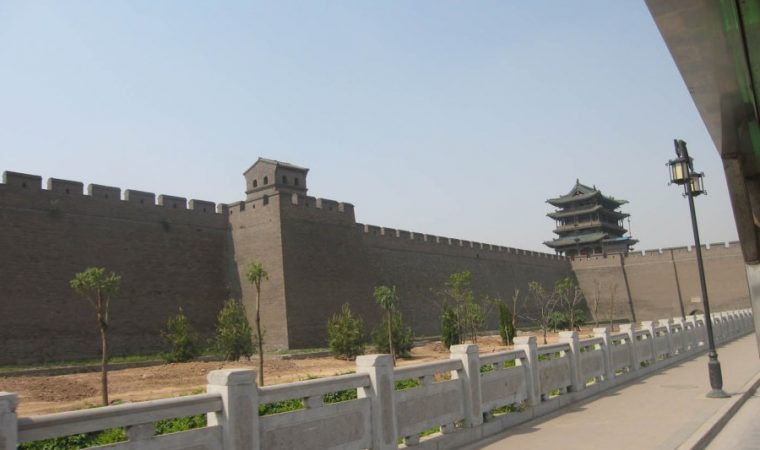 and I only have the one…

Context is everything in heritage conservation. As any of my former students could tell you, it is the key to determining the significance of a site.  Context includes issues like rarity, authenticity, historical impact, artistic value, etc.  If I have hundreds of walled cities in China – as once existed, only those that were exceptionally intact or beautiful or impactful would be considered significant.  If, however, I have only one walled city surviving, its significance immediately becomes global.

Context is also important in terms of culture. There is a Belgian village in Japan which is sort of like a cultural amusement park, but we can successfully argue that it does not have authenticity because, well, it ain’t Belgium. Any cultural significance it has is related to the how and why of creating it and visiting it. Yes, Disneyland has significance, but that significance – THE CONTEXT – is America in the 1950s and not how pirates lived in the Caribbean. 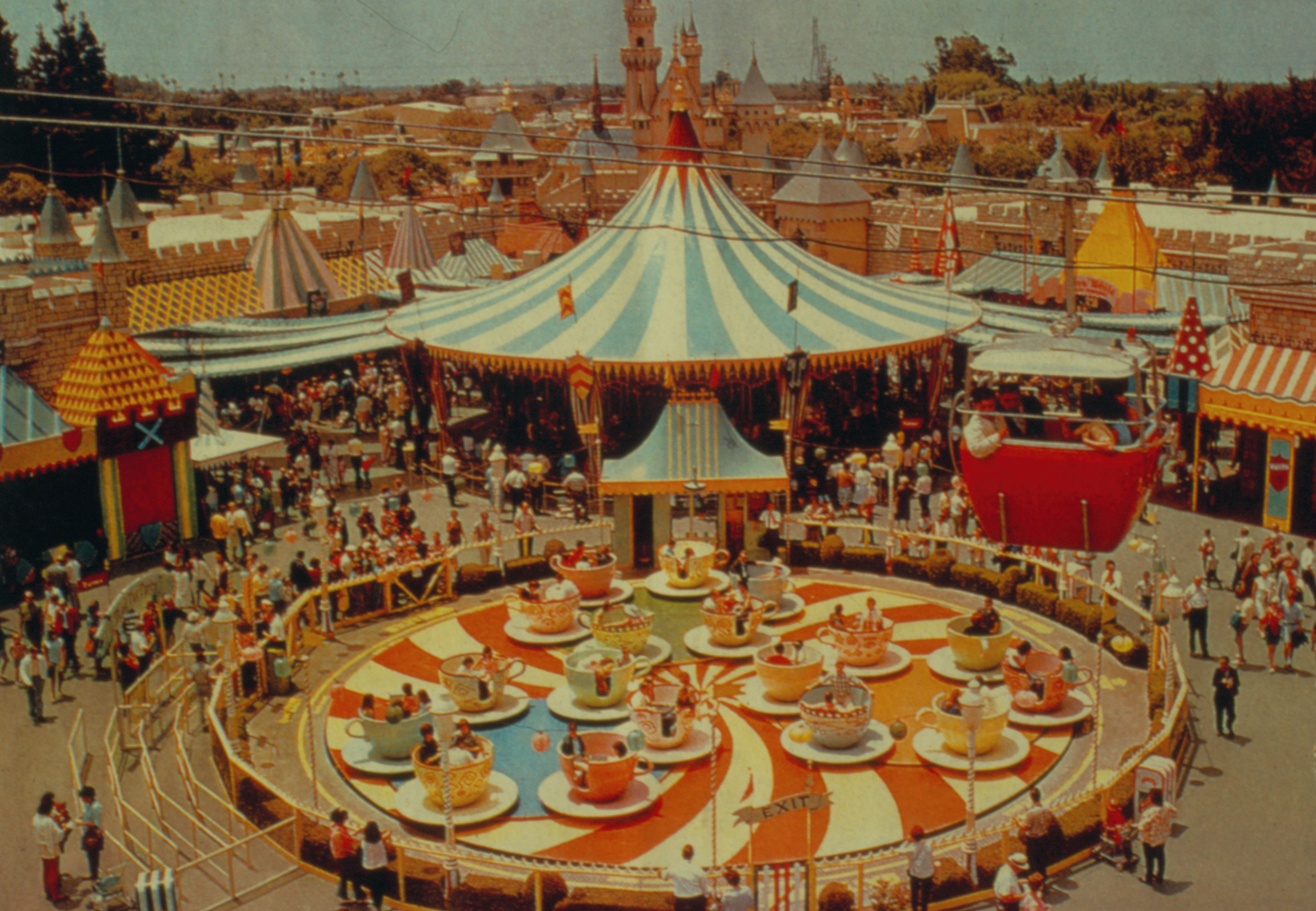 We can make similar arguments about what is consdered high and low culture, and here is where it gets interesting. I have often related the storyof how the group now known as Landmarks Illinois did an inventory of significant landmarks in Chicago in 1974 and did NOT include the Chicago Theatre (1921, Rapp & Rapp) because it was considered low culture, entertainment architecture – not serious like Louis Sullivan or Frank Lloyd Wright or Daniel Burnham. Within six years the popular building was threatened, and Landmarks Illinois revised its high culture opinion. The context changed. The context of architectural history changed (as it always does over time), the context of popular engagement with landmarks changed as well. 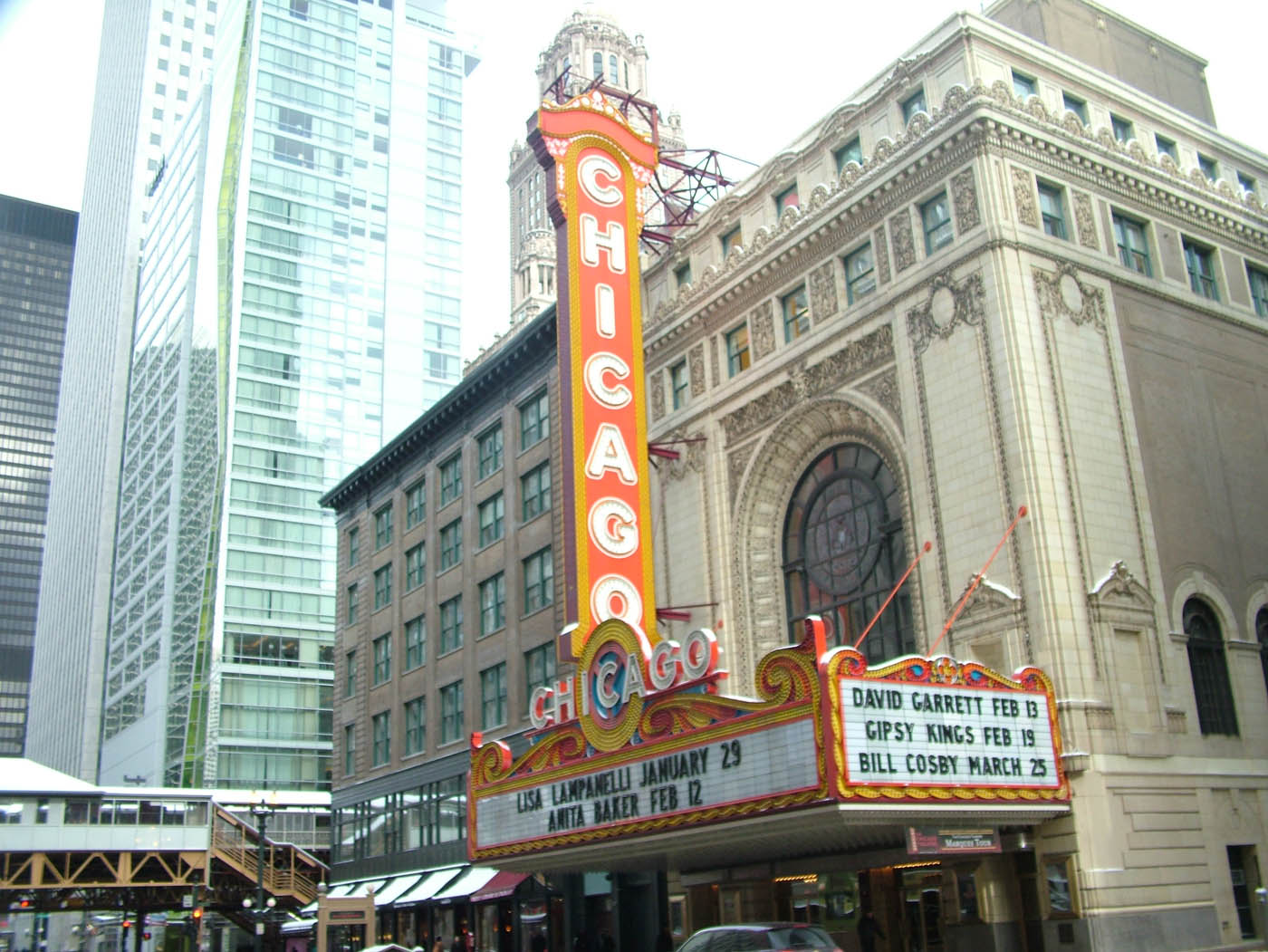 Part of this story also has to do with Chicago, which has a particular culture, especially in terms of architecture. Thanks to its singular legacy in the history of skyscrapers and modernism and fancy guys like Sullivan and Burnham and Wright, the average Chicagoan understands architecture as part of local culture. It is like a spectator sport, more so than any other city in North America. And despite the integration of the Chicago Theatre into architectural history, Chicago can be a bit snobby.

When artist Seward Johnson did a super-size sculptural version of the famous Art Institute of Chicago painting “American Gothic” by Chicago-trained Grant Wood, people generally liked it, and understood that it fit into the context of the city. 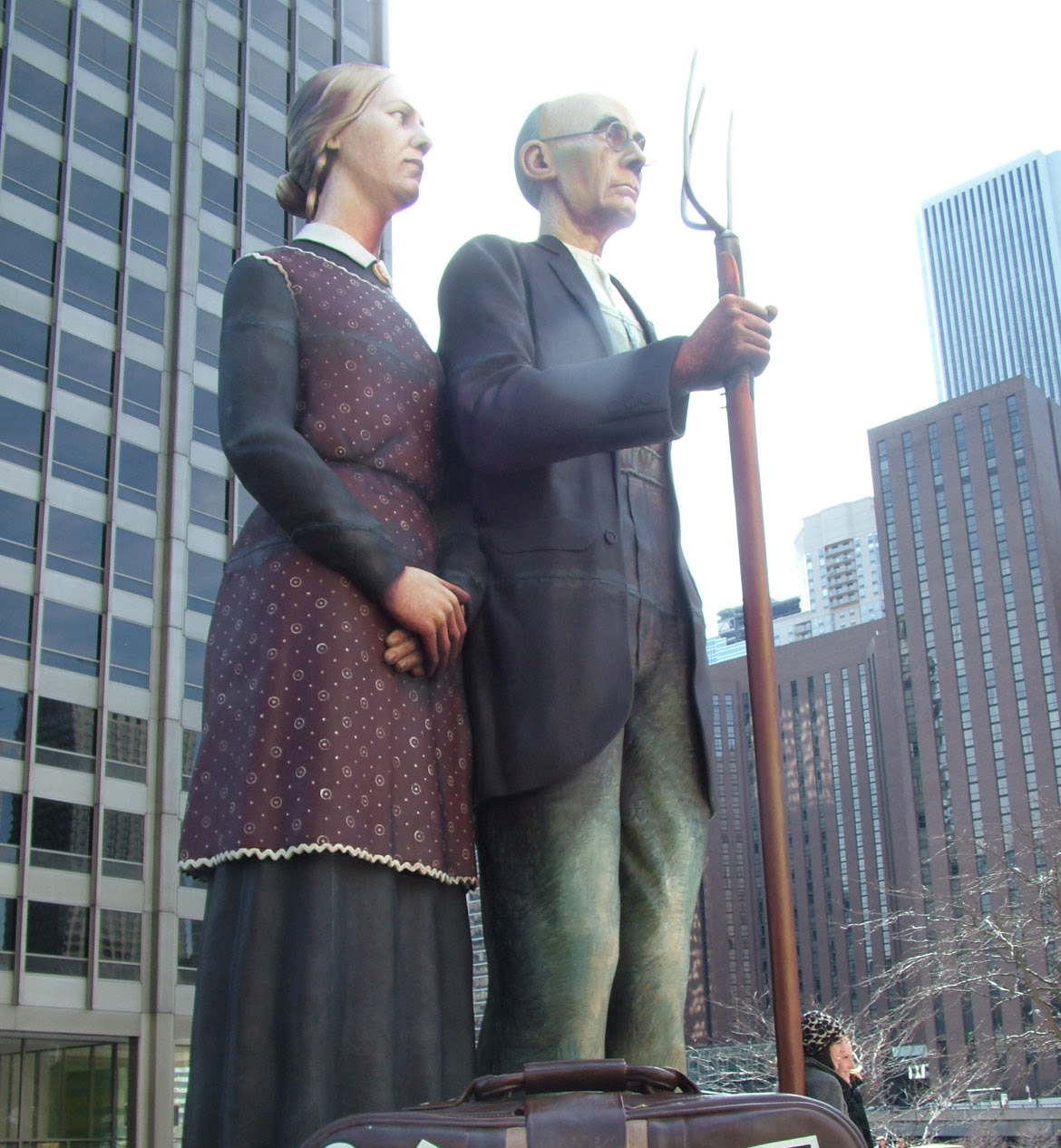 But then the same artist did an oversized version of Marilyn Monroe’s famed pose from the film The Seven Year Itch. Context was called into question: Monroe was not associated with the city, the film was set in New York, why was this here? It was certainly a popular tourist trap during its tenure, but most of the culture mavens decried it, mostly on the basis of its lack of context. (There was also a puritanical critique based on the reality that you could stand under..where?) 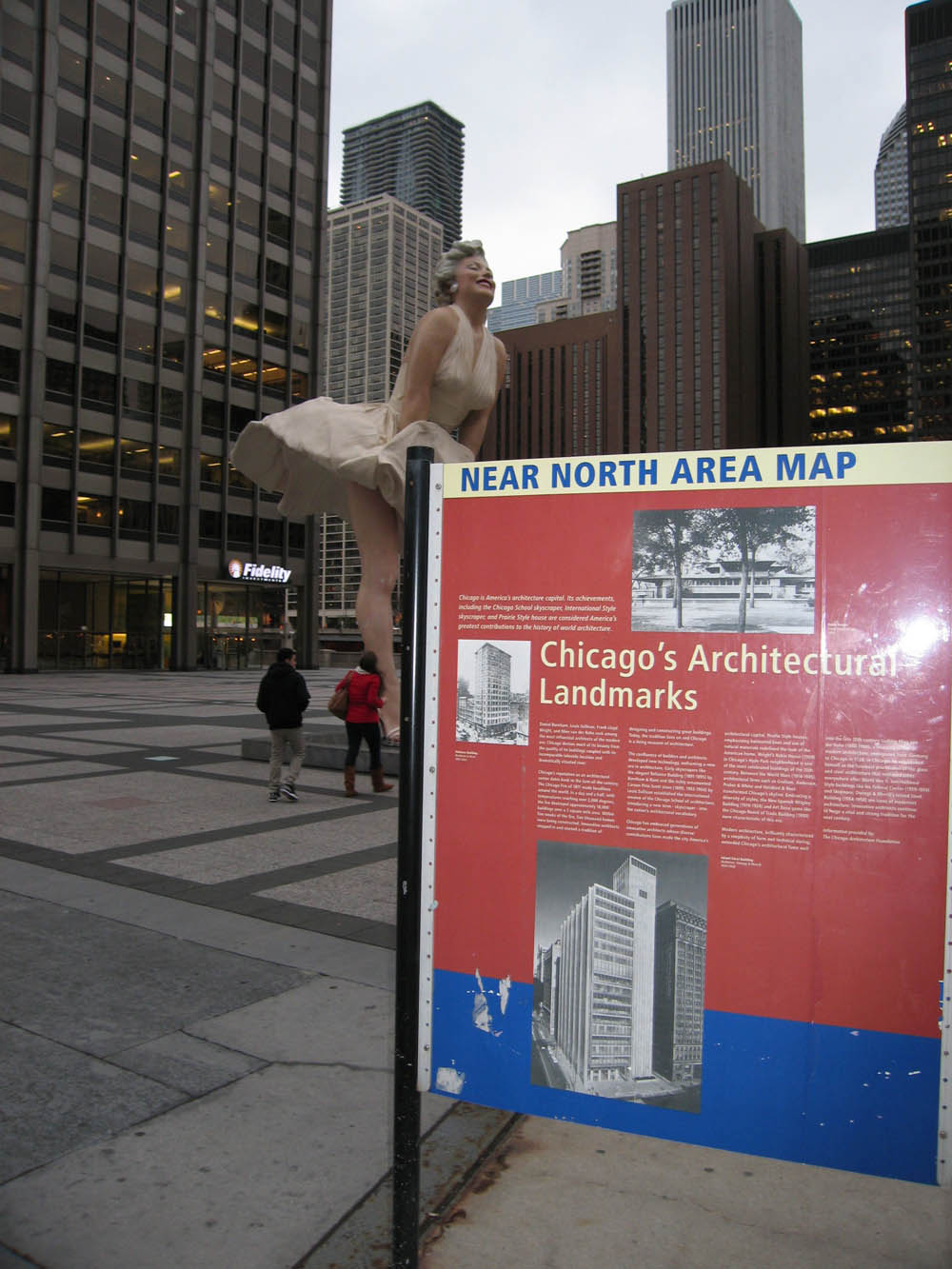 Keep your eyes on the architecture, buddy!”

Now, when Marilyn was taken away from North Michigan Avenue, she traveled to Palm Springs, and there she has been welcomed with open arms and unbridled enthusiasm. And I get it. Palm Springs is about the 1950s modernism that formed the context of the Seven Year Itch, indeed the context of Marilyn Monroe as a pop culture icon. Palm Springs is all about fabulousness, and what could be more fabulous than a 26-foot high Marilyn Monroe in her prime upswept skirt form? It may sound heretical, but this is to Palm Springs what David is to Florence: this sculpture conveys the spirit of the place. That is not snarky or critical, but simply accurate. Marilyn was a bit lost in Chicago, not as lost as a skyscraper in the Sahara or a Dreadnaught in the Danube, but still a little lost. She is totally at home in Palm Springs, beloved and appropriate. She is an icon and emblem of the genuine local culture. The context enhances the sculpture. 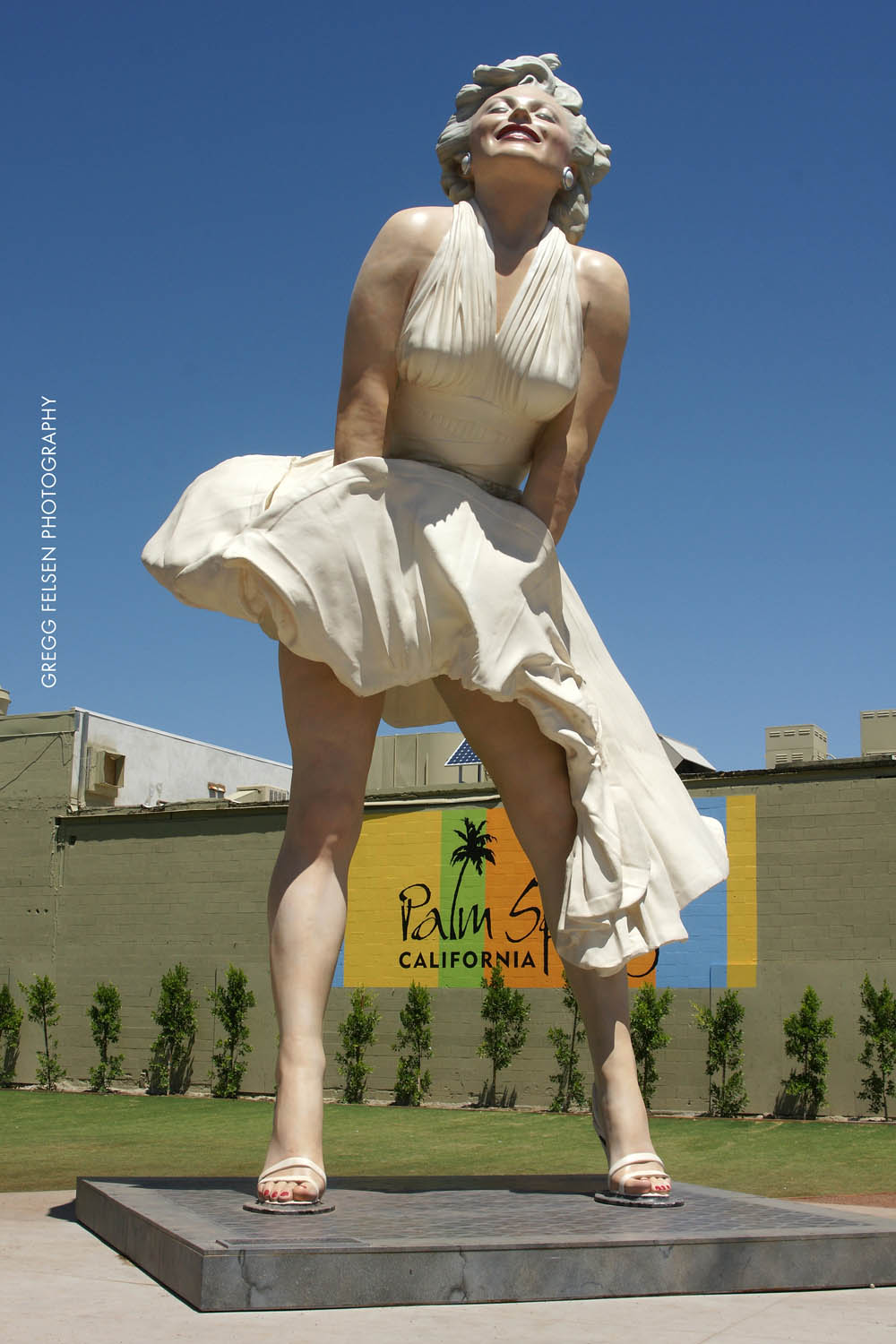 She even looks happier. Courtesy Gregg Felsen, Joe Enos and everyone at Forever Marilyn Palm Springs

I stress again, this is not a value judgement in terms of ranking one place over another, or even about high culture versus low culture. It is about place-specific culture and the appropriateness of art, or interpretation, to its specific site. This is a vital understanding in the heritage conservation field, where no solution is universal.