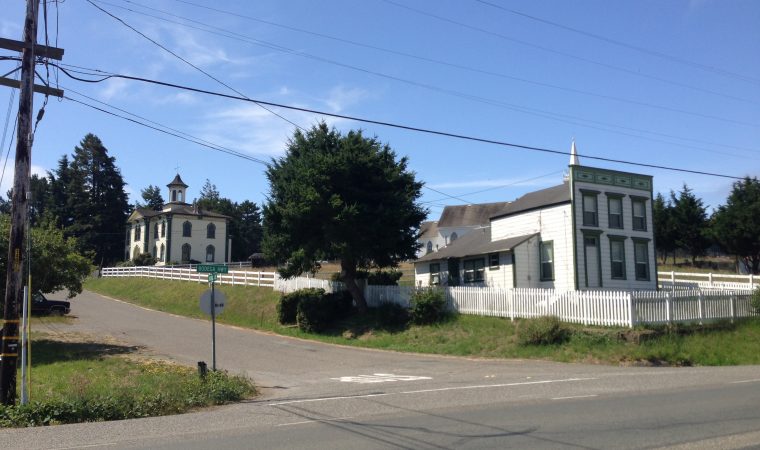 So we are driving in Sonoma County and we come to a town and see these lovely Victorian buildings on the hill.

There are some other people there taking pictures of this big old Italianate that looks kind of like a school, and a church and an antique shop. 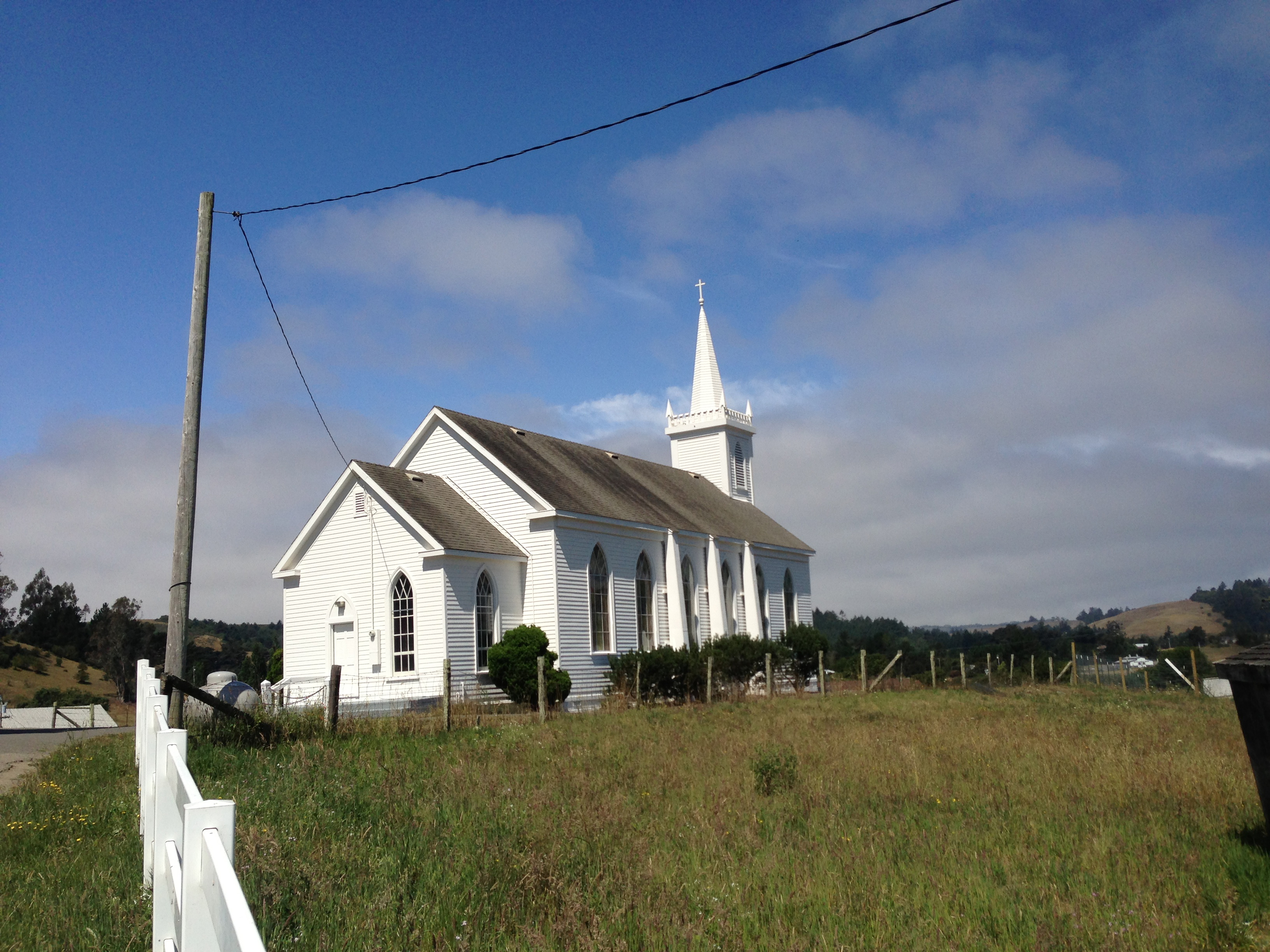 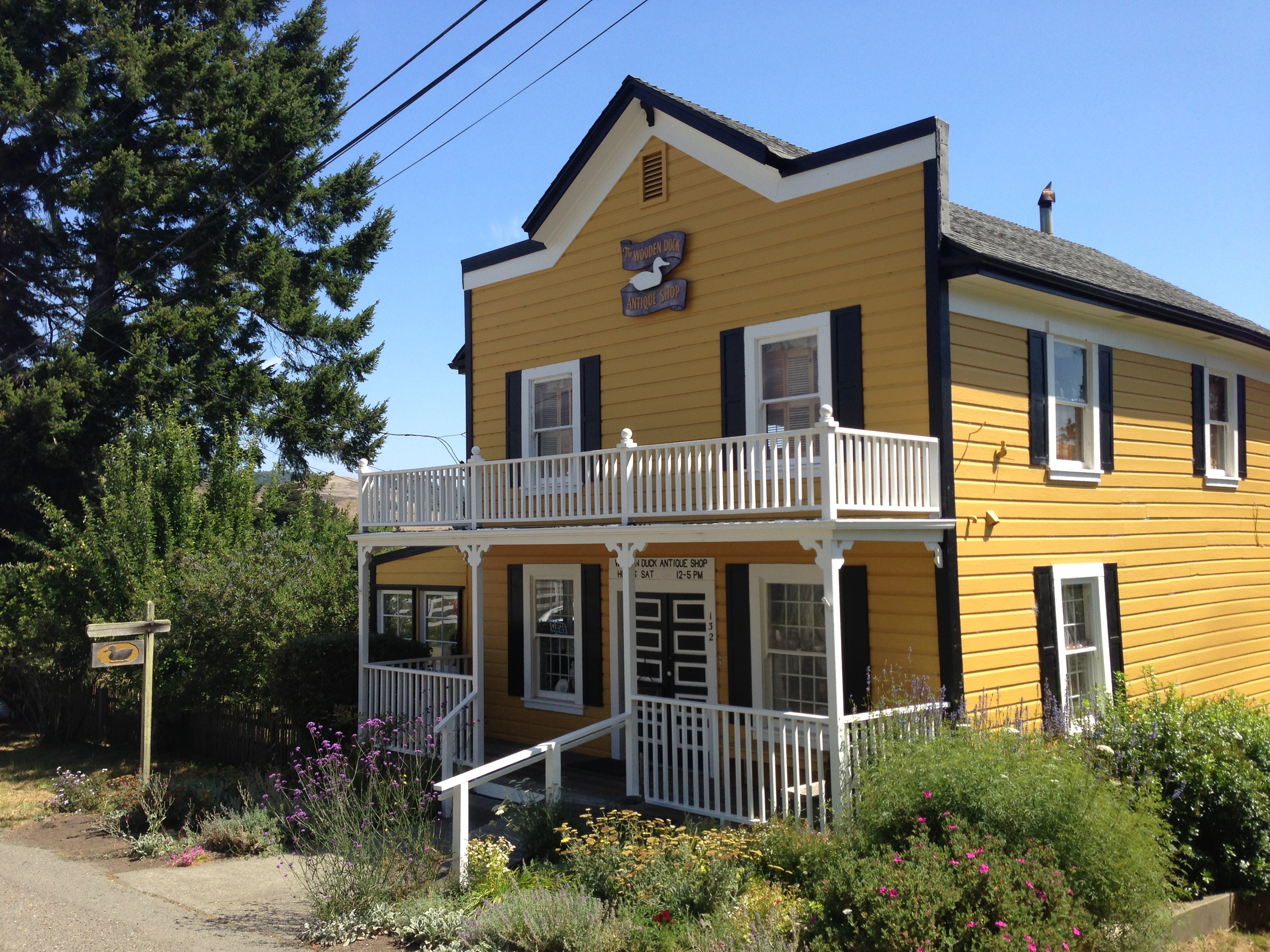 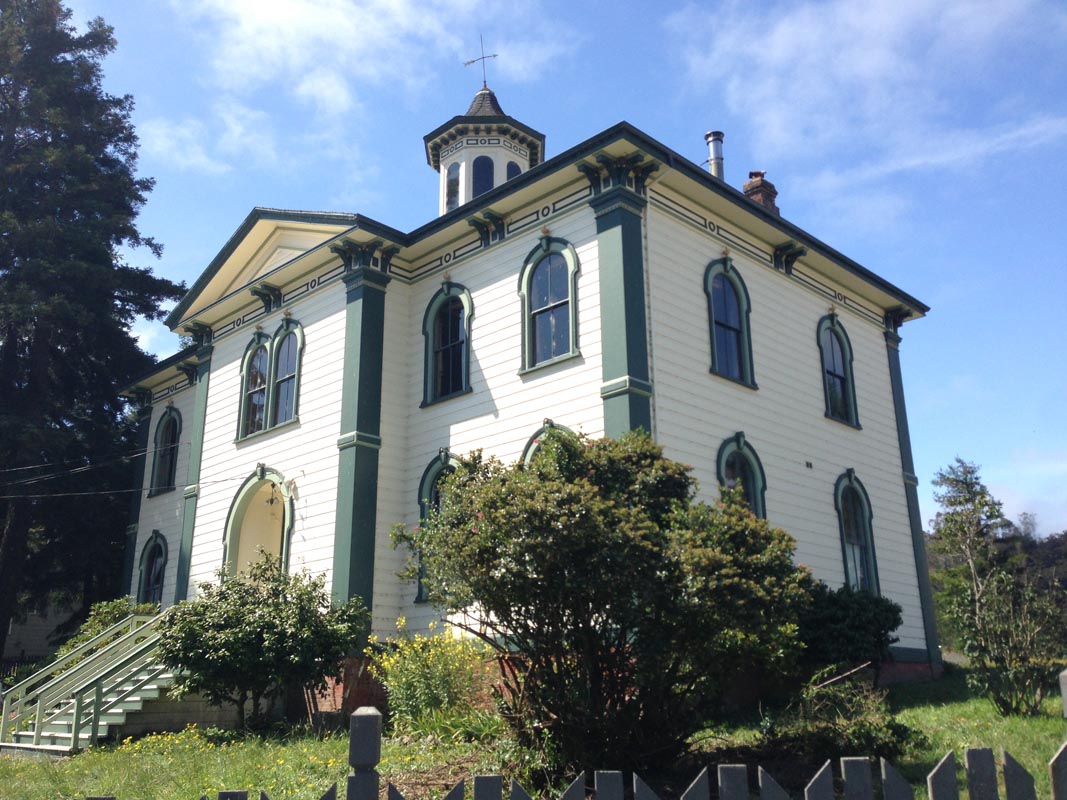 Now you might recognize this last building, but I was like the first viewer of The Sixth Sense or Fight Club and I was unaware of anything except a very cool mid-19th century buiding, so we went into town where we were looking for a fabric store and found a craft store and some other nice buildings like so… 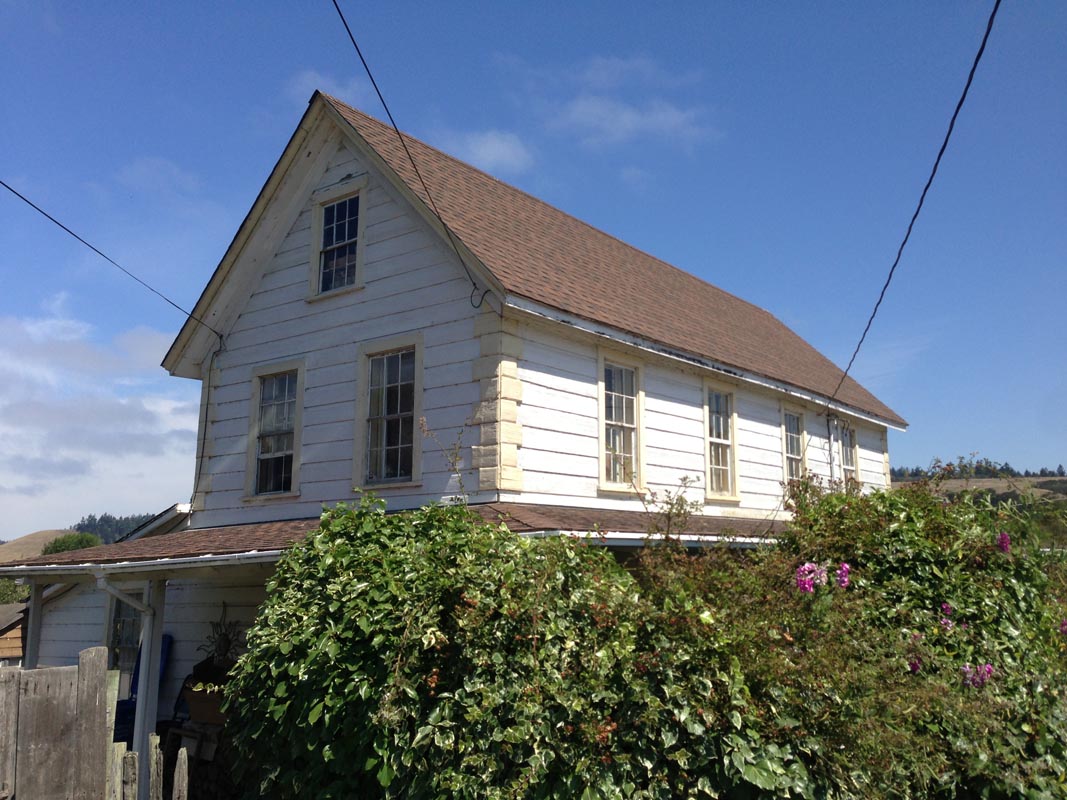 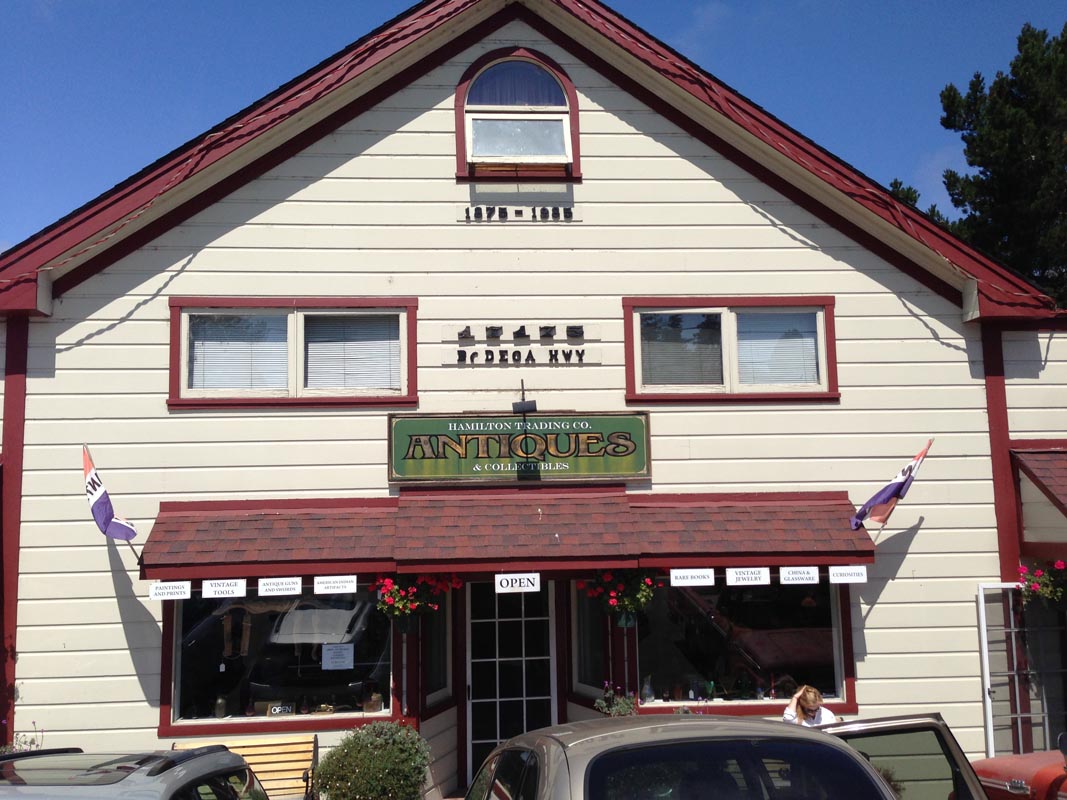 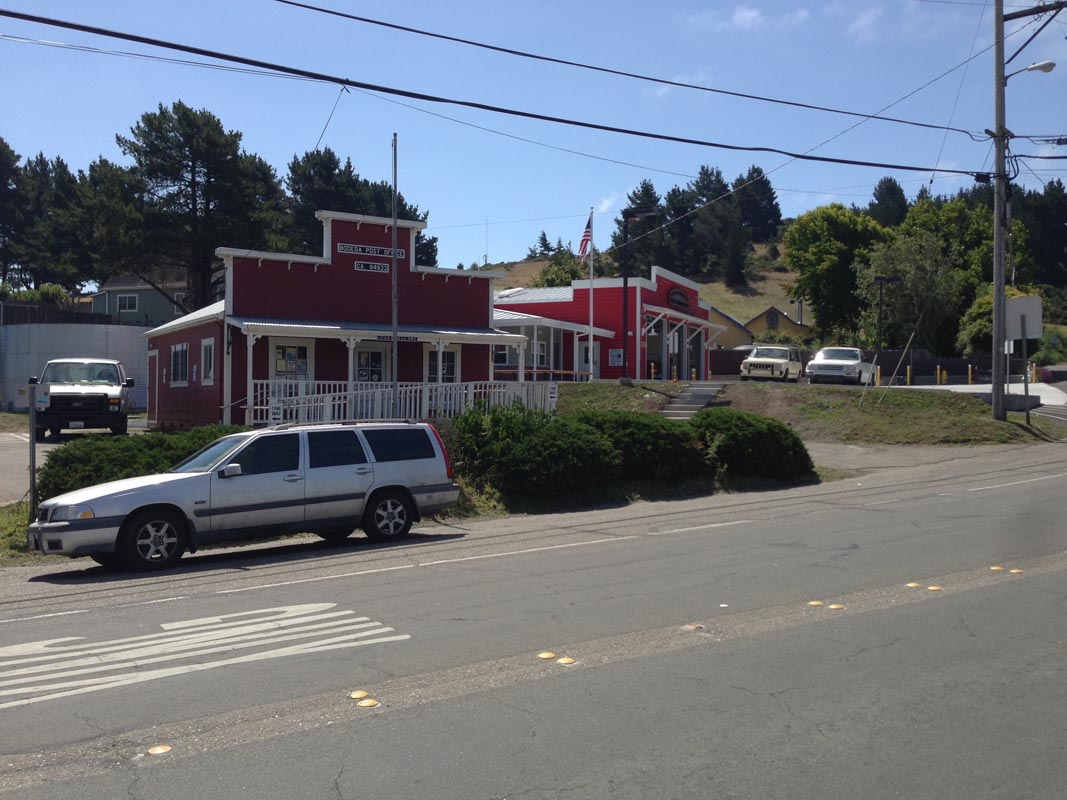 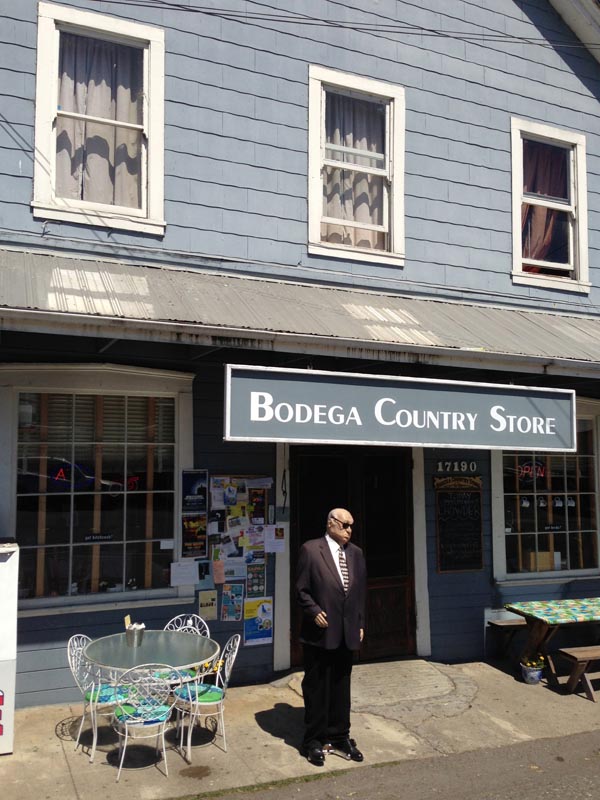 So why did the store have a mannequin of Alfred Hitchcock out front? And one of Tippi Hedren inside? 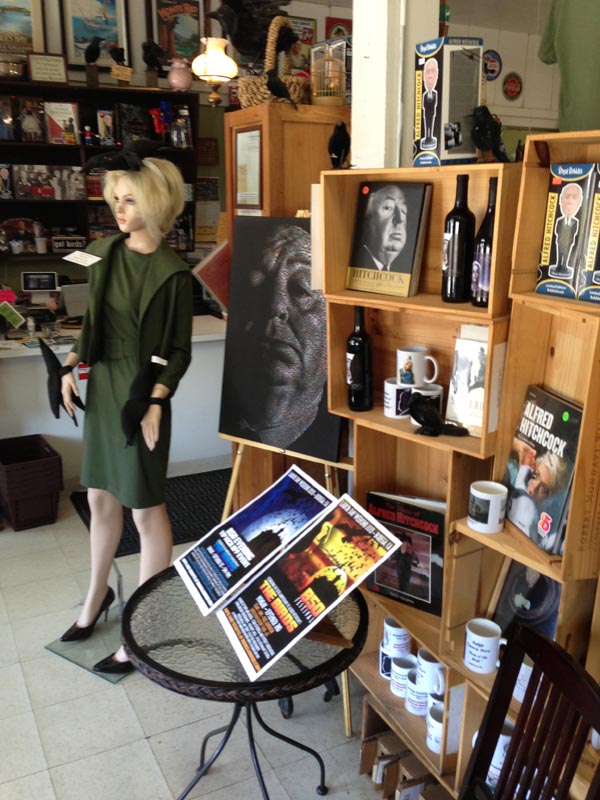 And unlike when I saw The Sixth Sense and figured it out, I needed a storefull of The Birds memorabilia to connect that building with the movie that made it famous. 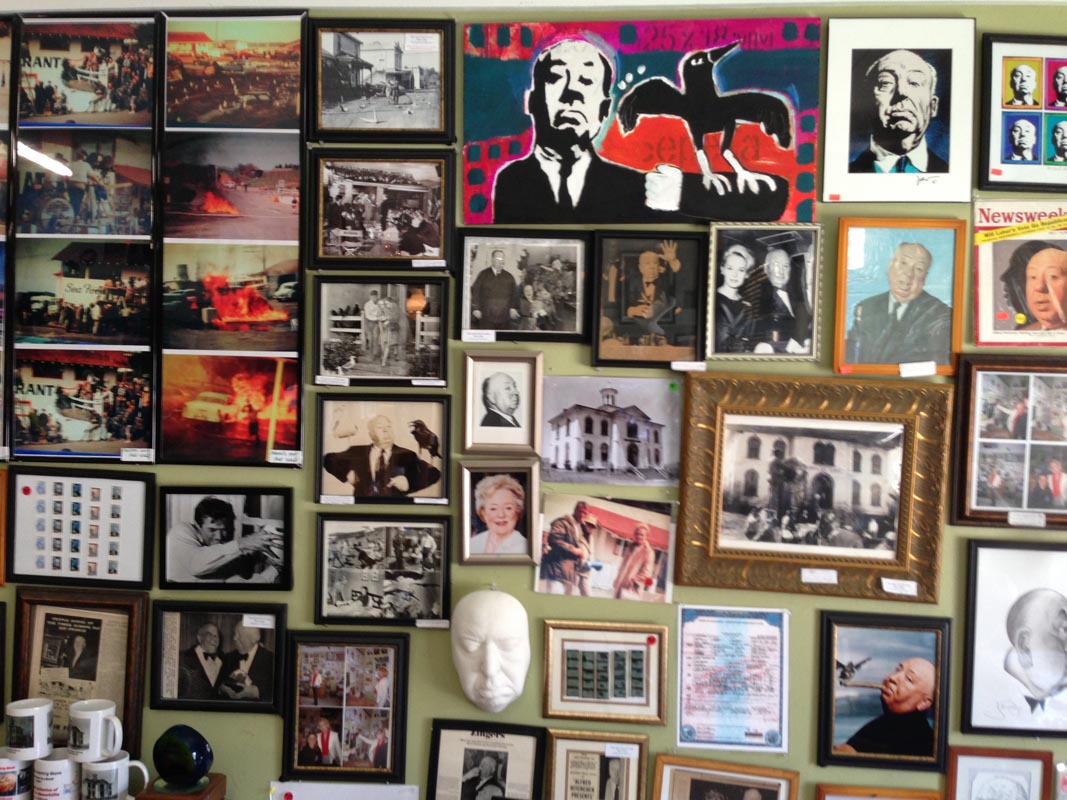 Now, earlier we had swung by one of my favorite buildings in Marin County, which is noted in architectural history as one of the late great works of Frank Lloyd Wright, the Marin County Courthouse. 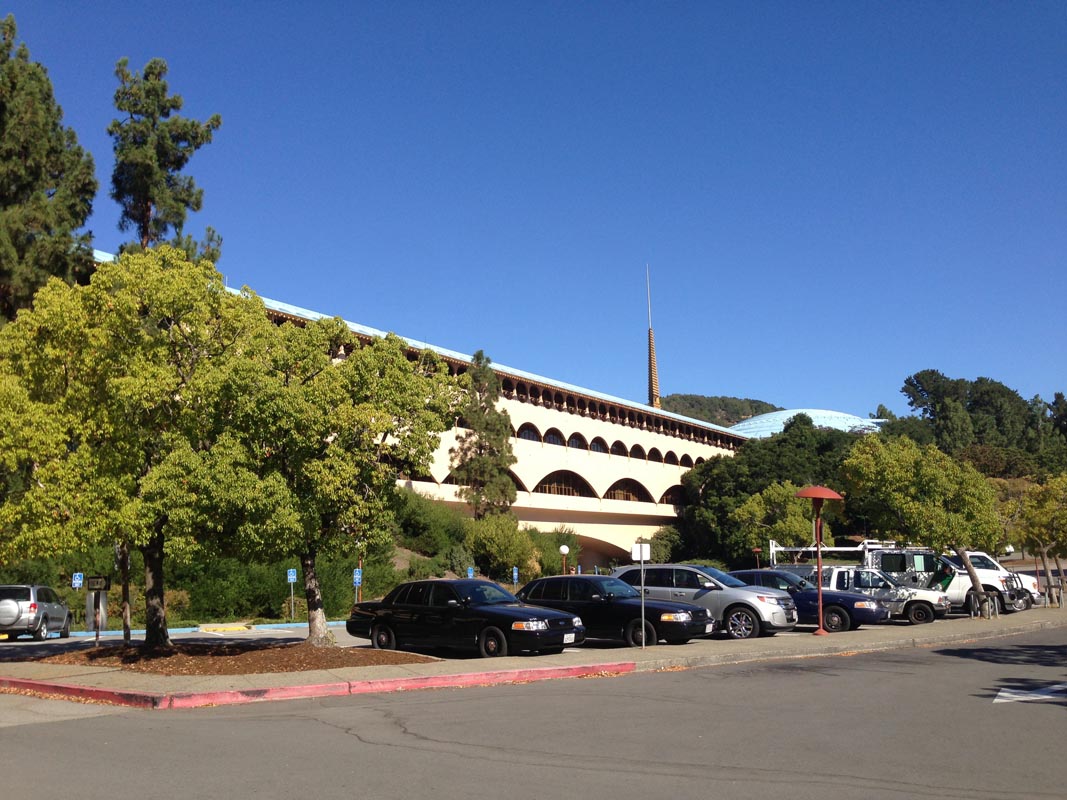 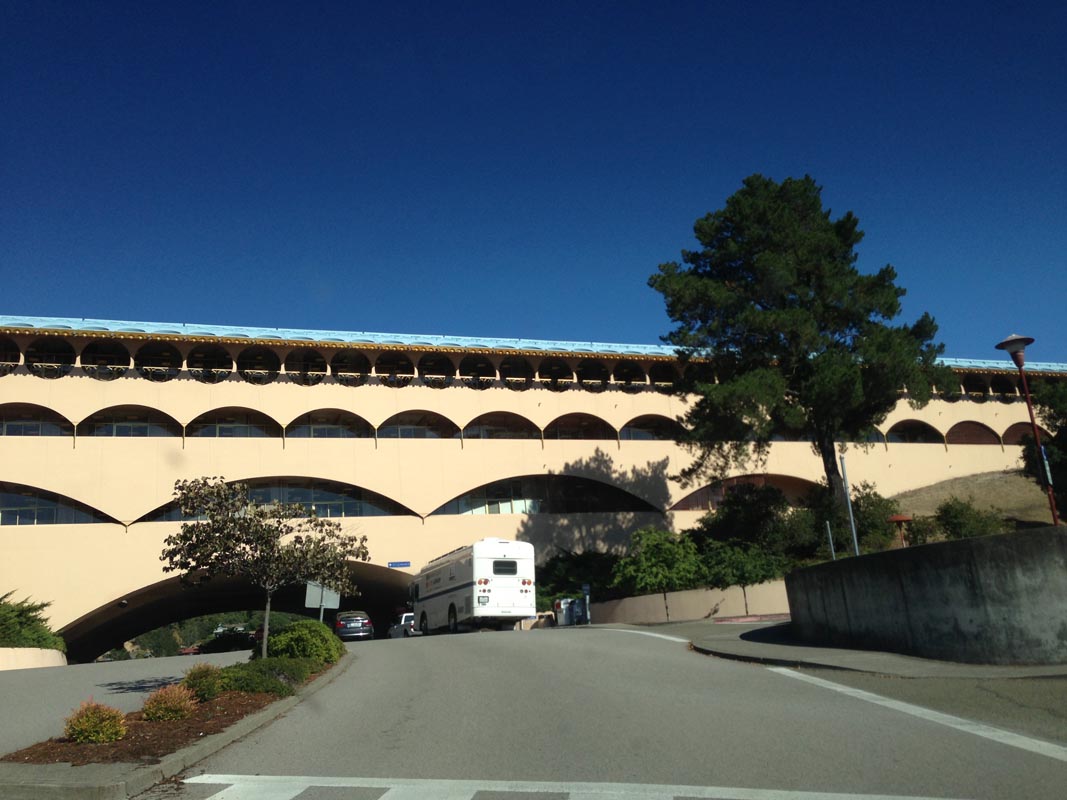 Appearing in a movie can make a place or a building more famous and more attractive to tourists, which might seem to be cheating since the “history” being added to the building is fictional by definition. Yet, when we film a famous movie at a site, that is part of its history too, right? I am reminded of being in Marfa, Texas, at a National Register hotel, which had a whole room dedicated to memorabilia of the film Giant, which was made there in the 1950s. More recently, No Country for Old Men and There Will Be Blood were filmed in the rural hipster mecca. 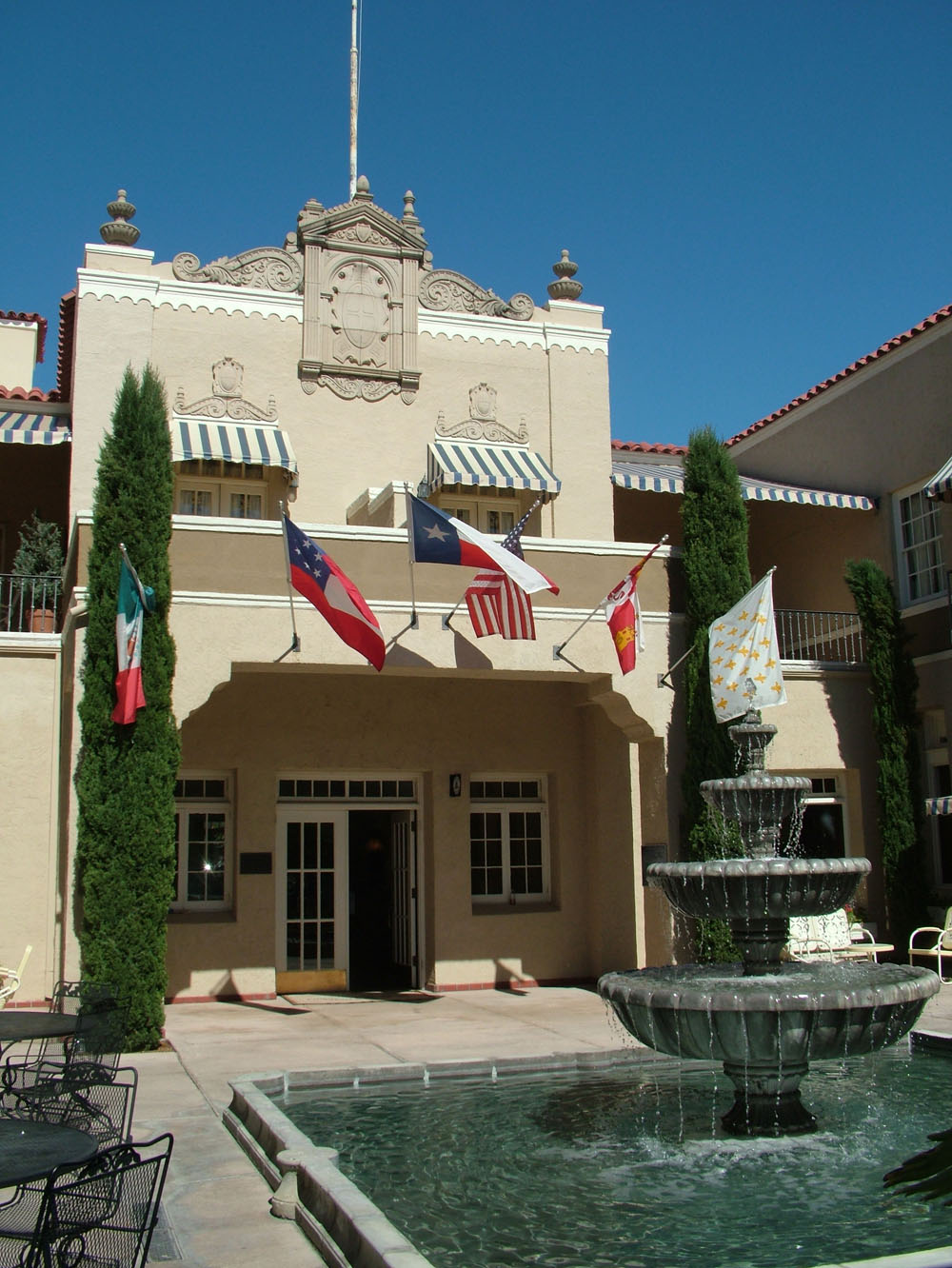 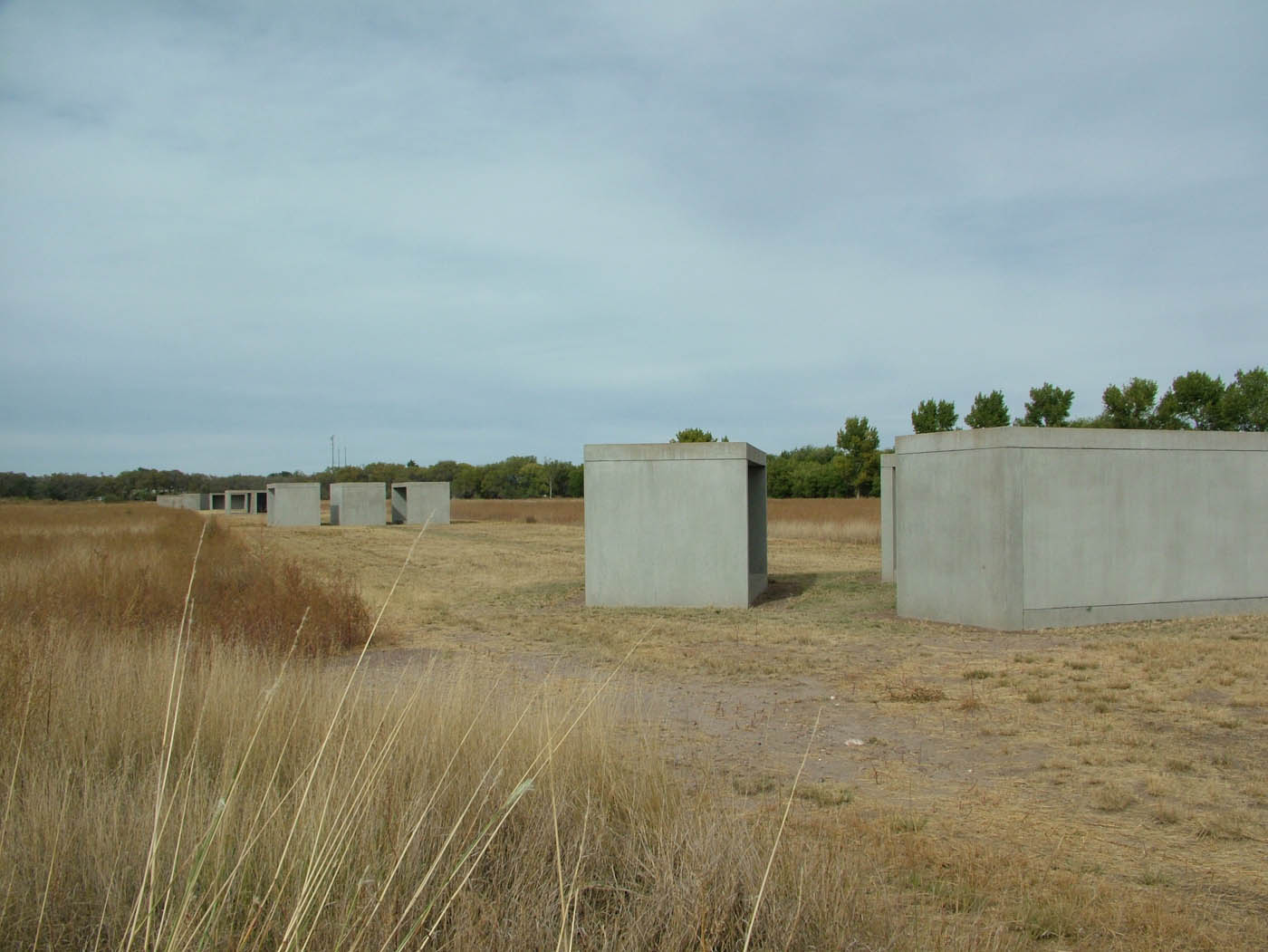 Even places that have legitimate and ongoing attraction for tourists because of their architecture get a boost from movies. Think about Paris after The Da Vinci Code. Already famous buildings became the setting for a novel and then increased the interest in those buildings tenfold. Of course, LA is full of scenes from movies since they are mostly made there. TV has a similar influence – twenty years ago Germans called this monument in Chicago “Bundy Fountain” because it appeared in the opening credits of Married With Children 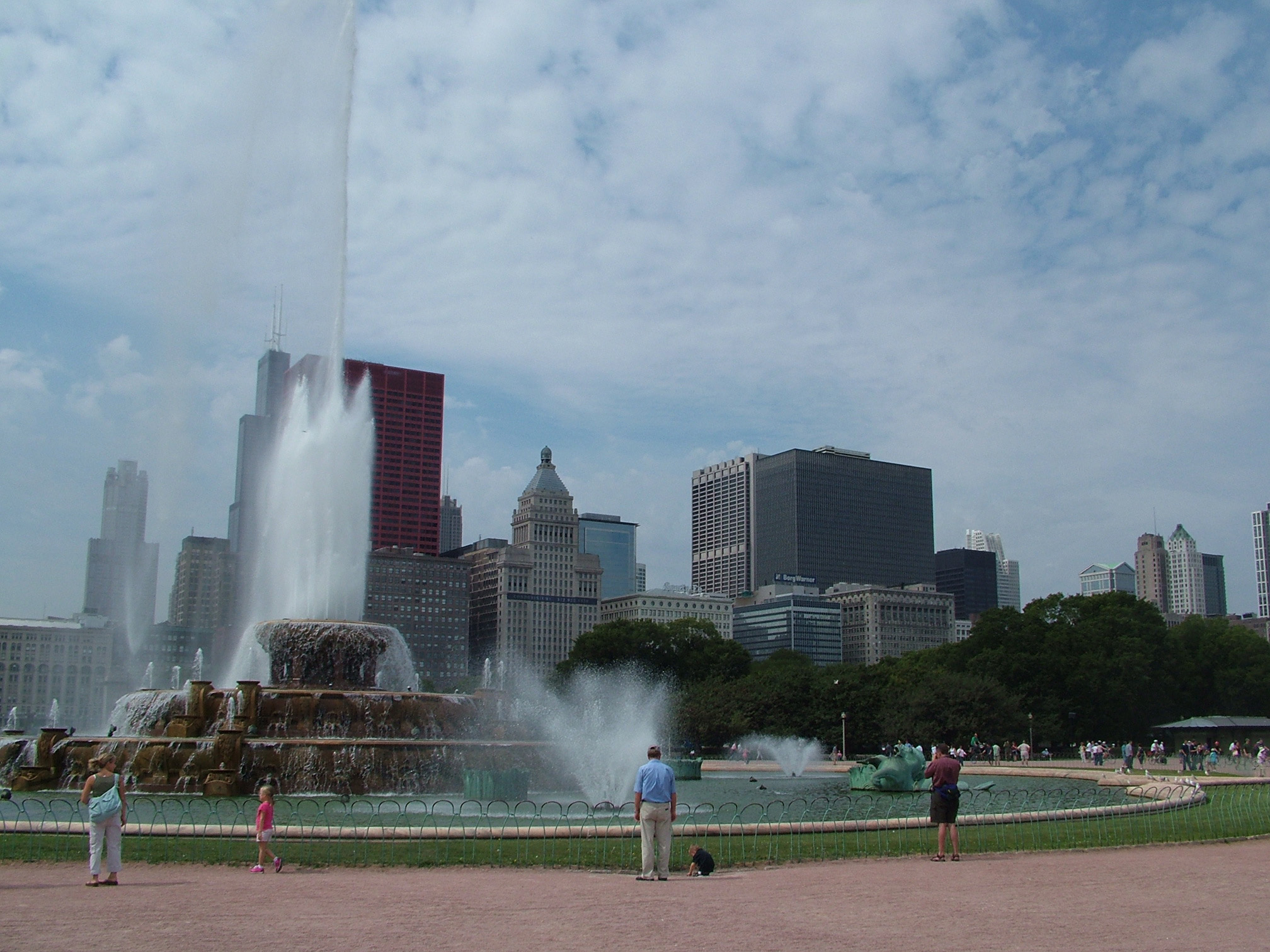 The point of all of this virtual history of place is that it is a kind of historia, a narrative that may in fact have been inspired by the place or not but is definitely attached to the place. In terms of tourism, this connection to fictional narratives can exponentially increase it – just look at the tourism of Universal Studios Hollywood, which is where TV and movies are really made. 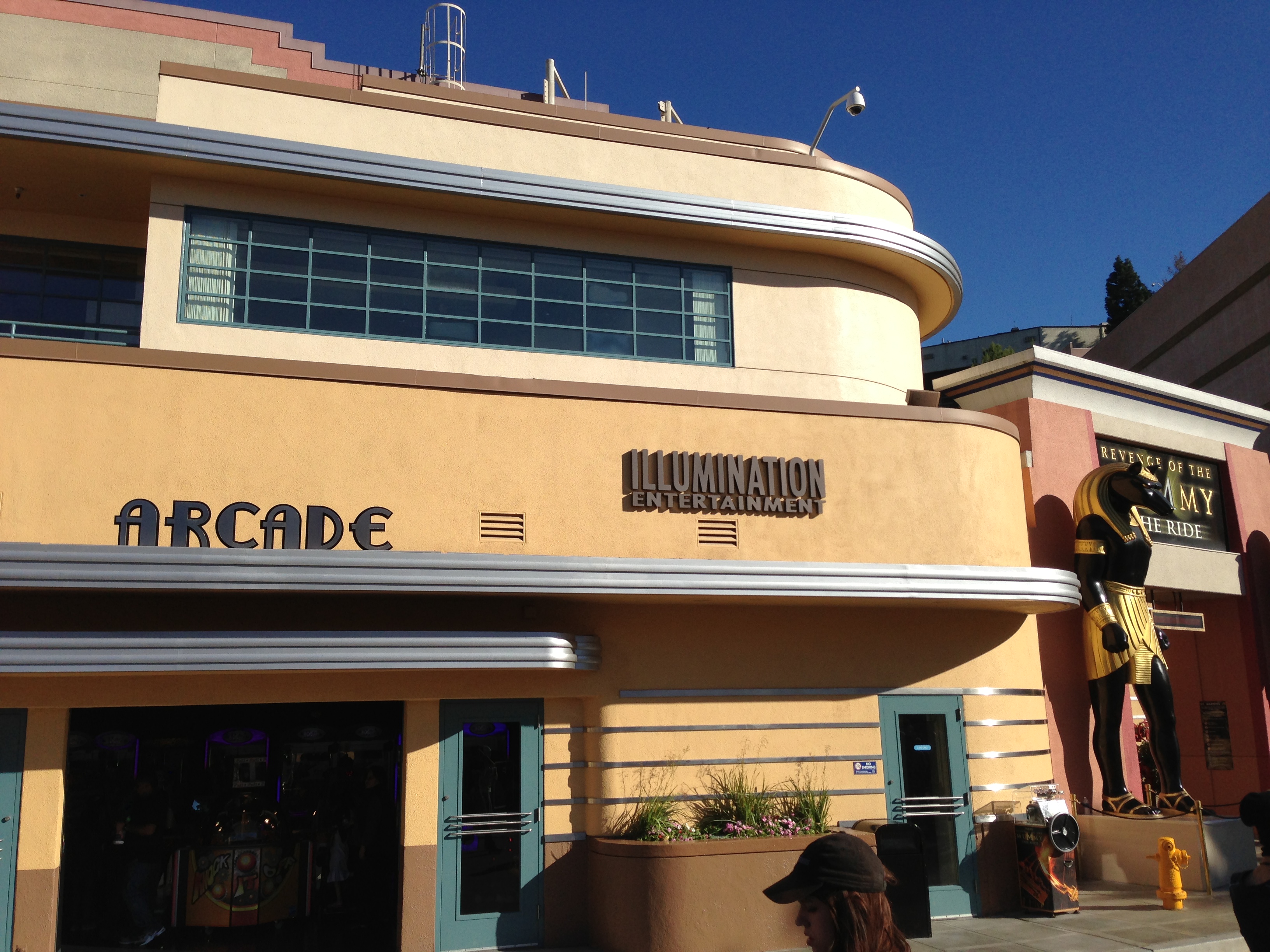 but this building is part of the purpose-built amusement park that goes along with the studio tour, so not sure where that fits into the analysis.

One of my favorite visits over 20 years ago was Portmerion, Wales, where they shot The Prisoner (say that in conversation and confusion ensues) back in the 1960s. It was a funny fantasy place of slightly off-scale buildings, not unlike Disneyland but preceding it by two generations. It was an architectural fantasyland and it became a perfect movie set. Interestingly, what keeps the tourists coming since the 1970s is Portmerion china, so the layers of historia keep building… 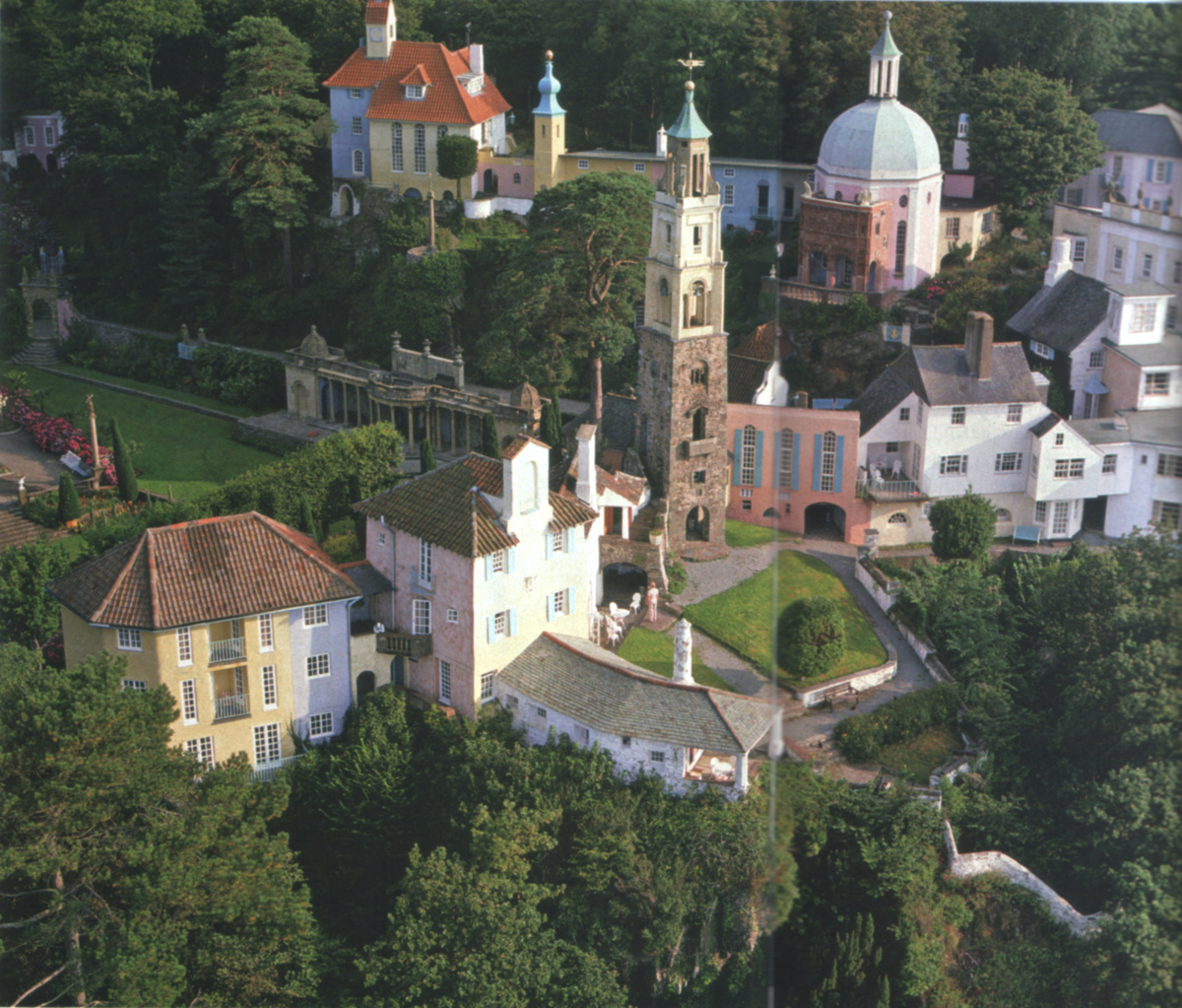