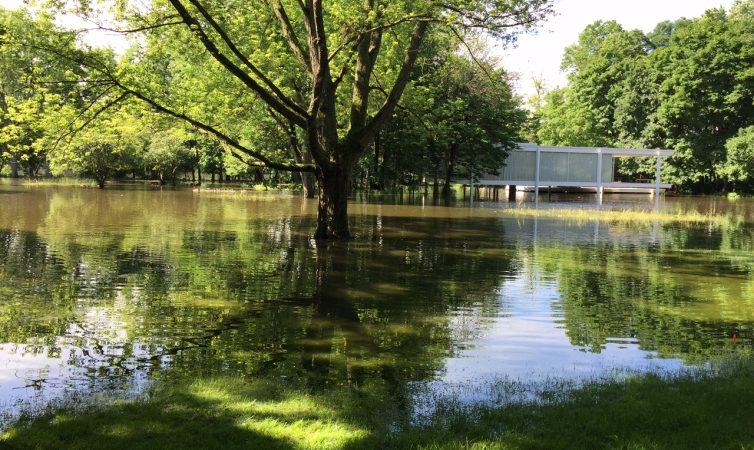 Last week.  Maybe next week too.

It has been 13 months since I last blogged about the Farnsworth House (Ludwig Mies van der Rohe, 1951).  In that blog I detailed the various options that had been studied to try to conserve the house despite the increased flooding of the Fox River at its location near Plano, Illinois.

I have been involved in this house for a long time due to my Board service at both Landmarks Illinois and the National Trust for Historic Preservation, and for the last couple years I have also served on the Technical Advisory Panel looking at flooding mitigation options for the Farnsworth House.  I have been a cheerleader for the process the National Trust has undertaken, and I have listened especially closely to the National Park Service, since it is essential in my mind that any actions taken insure we preserve the National Historic Landmark status of this iconic masterpiece of architecture. 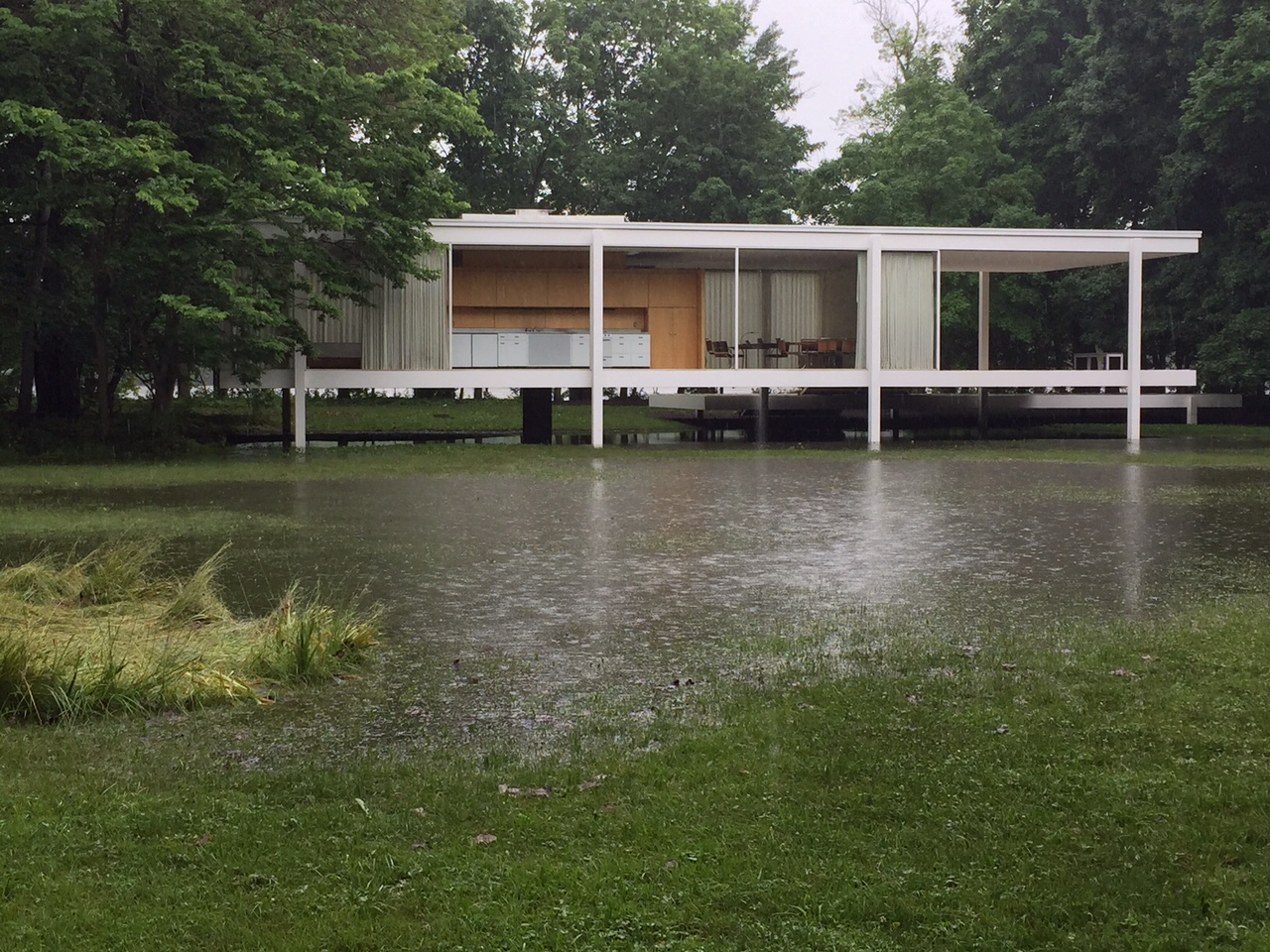 I came into the process as a skeptic, not wanting to move or alter the house.  Let it flood, I said, taking a purist position.  It’s a submarine, I said.  I did not like the idea of moving it because we bought it in 2003 so it wouldn’t be moved away.  As Dirk Lohan (Mies’ grandson and an important architect in his own right) says, the house makes no sense if it is in a location that does not flood,

I became convinced that the hydraulic option – putting the house on hydraulic jacks that would lift it out of harm’s way in the case of a flood – was the best preservation option, and I still believe that.  Doing nothing, I realized, relegated the house to the status of archaeological ruin.  But of course doing anything with a house of this international significance will cause some people to get their knickers in a twist, pressing upwards as they express objections to actions which could harm this landmark.  As all actions can.  As inaction will. 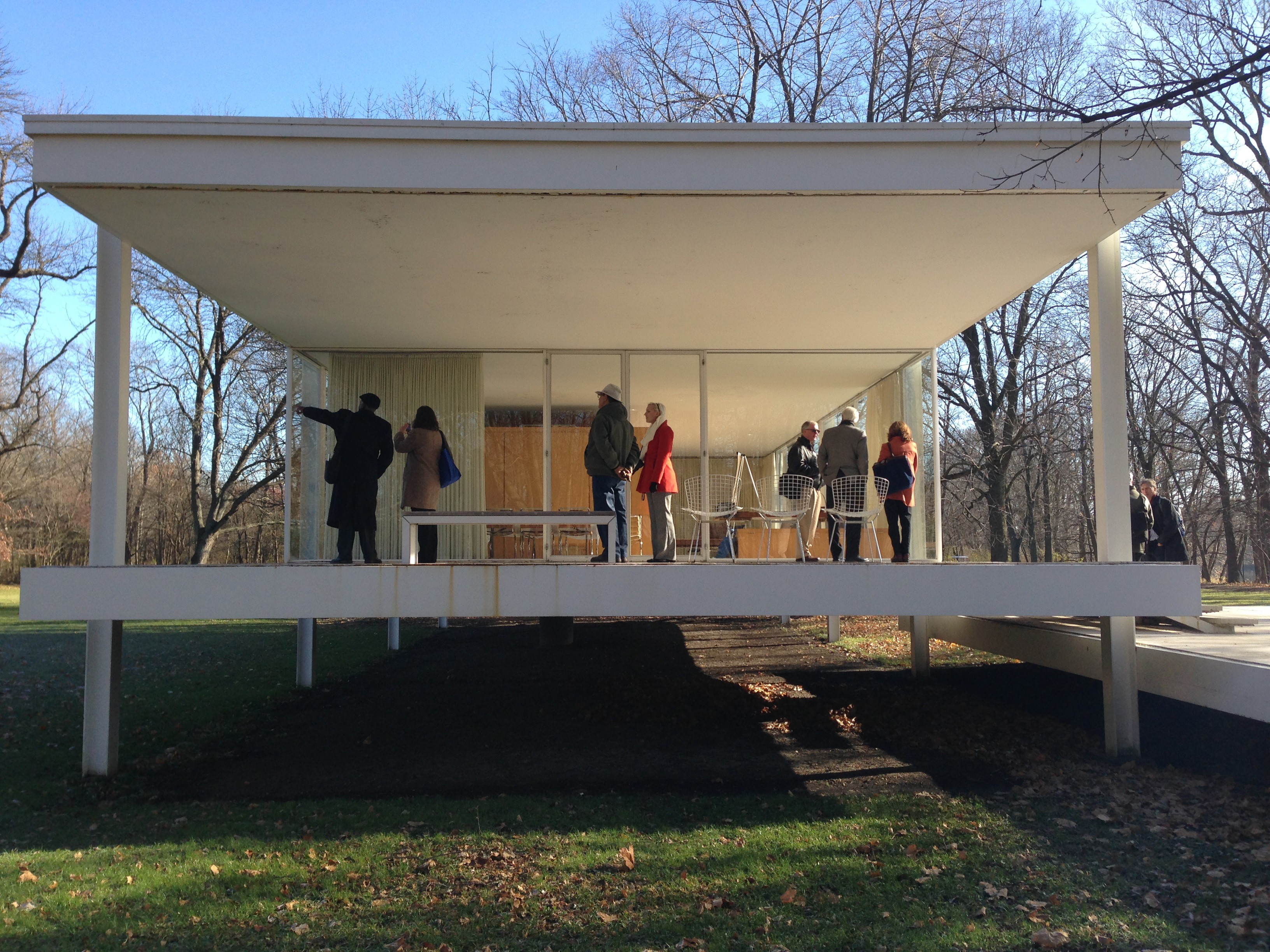 Doing nothing will do great harm to the building, and it is clear from the National Park Service and others that doing nothing is NOT a preservation option.  That is the archaeological ruin option.  Yesterday in the Chicago Tribune Blair Kamin reported on what has happened in the last year as some preservationists – John Vinci in particular – have objected to the hydraulic option and forced the National Trust and Landmarks Illinois to investigate a new option – moving it almost half a mile to a new site on Dr. Edith Farnsworth’s property where it will 1.  flood less, 2. allow a reinterpretation of the original landscape, which was ruined by the introduction of a highway bridge in 1970, reimagined as a manicured landscape in the 1970s and 80s,  and altered by the loss of a sugar maple tree that framed the house in 2012. 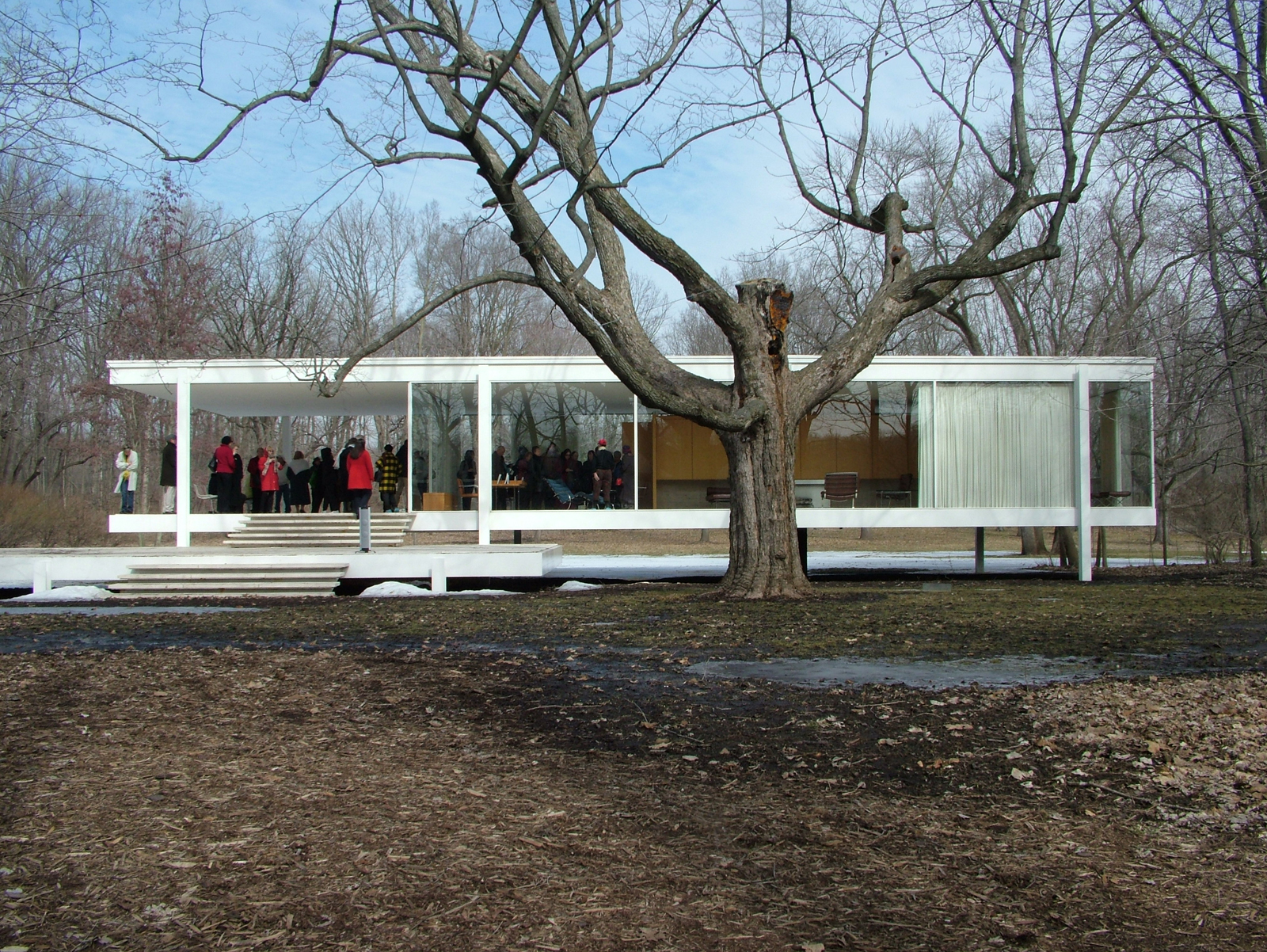 This tree is no more

Doing anything dramatic – and dramatic options are all that remain – will upset or excite people.  Look how the Miesians got upset about the new window stops at IIT Crown Hall – a quarter-inch slope meant that a NON-RIGHT ANGLE had been inserted, thus wrecking (??) Mies’ vision. 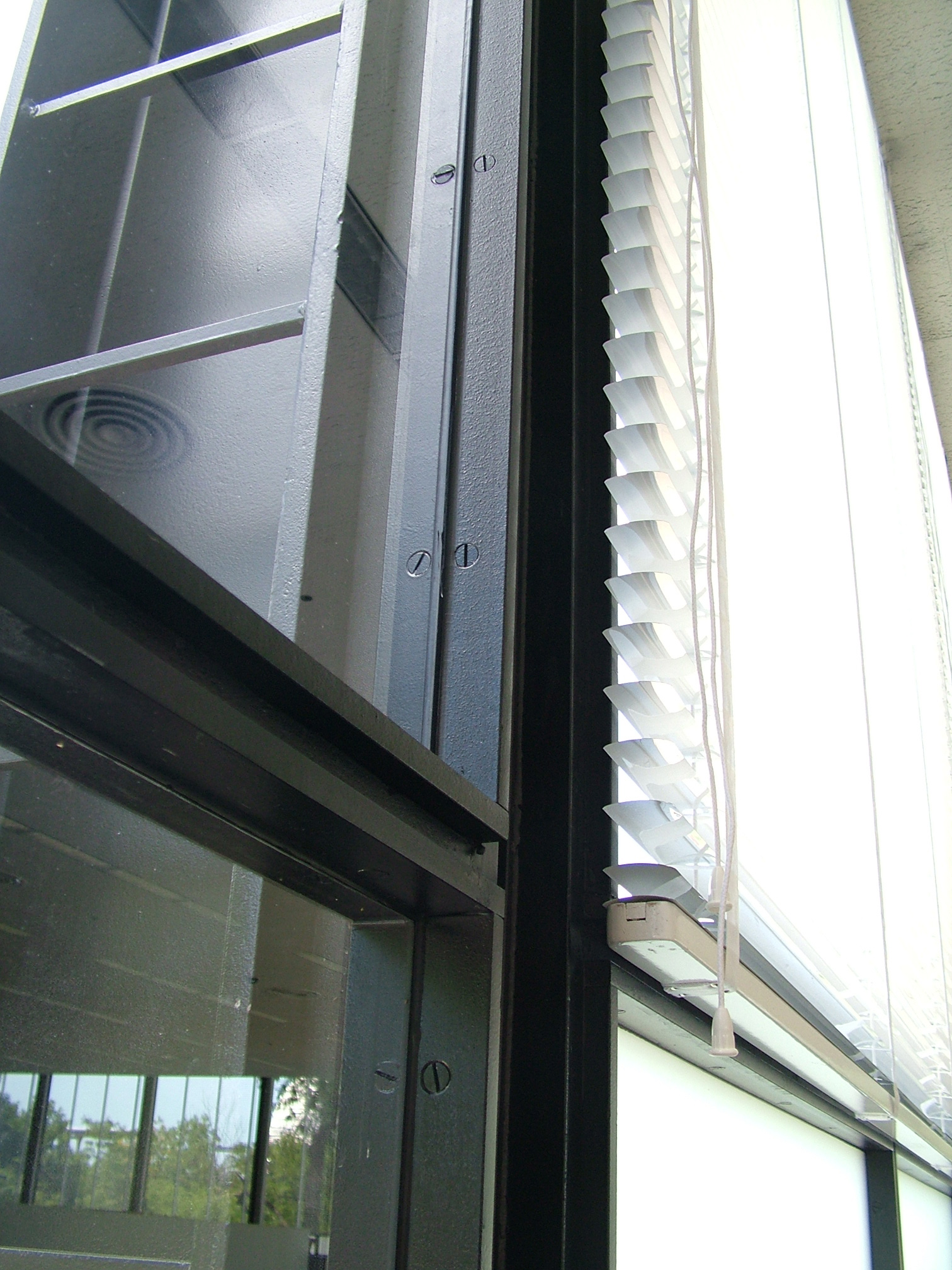 Landmarks Illinois has to approve whatever solution obtains thanks to their preservation easement, and they will make the decision as a Board.  Thanks to local opposition, the National Trust is now looking at this new relocation option.  (Note:  I have not been on the Landmarks Illinois Board for two years) 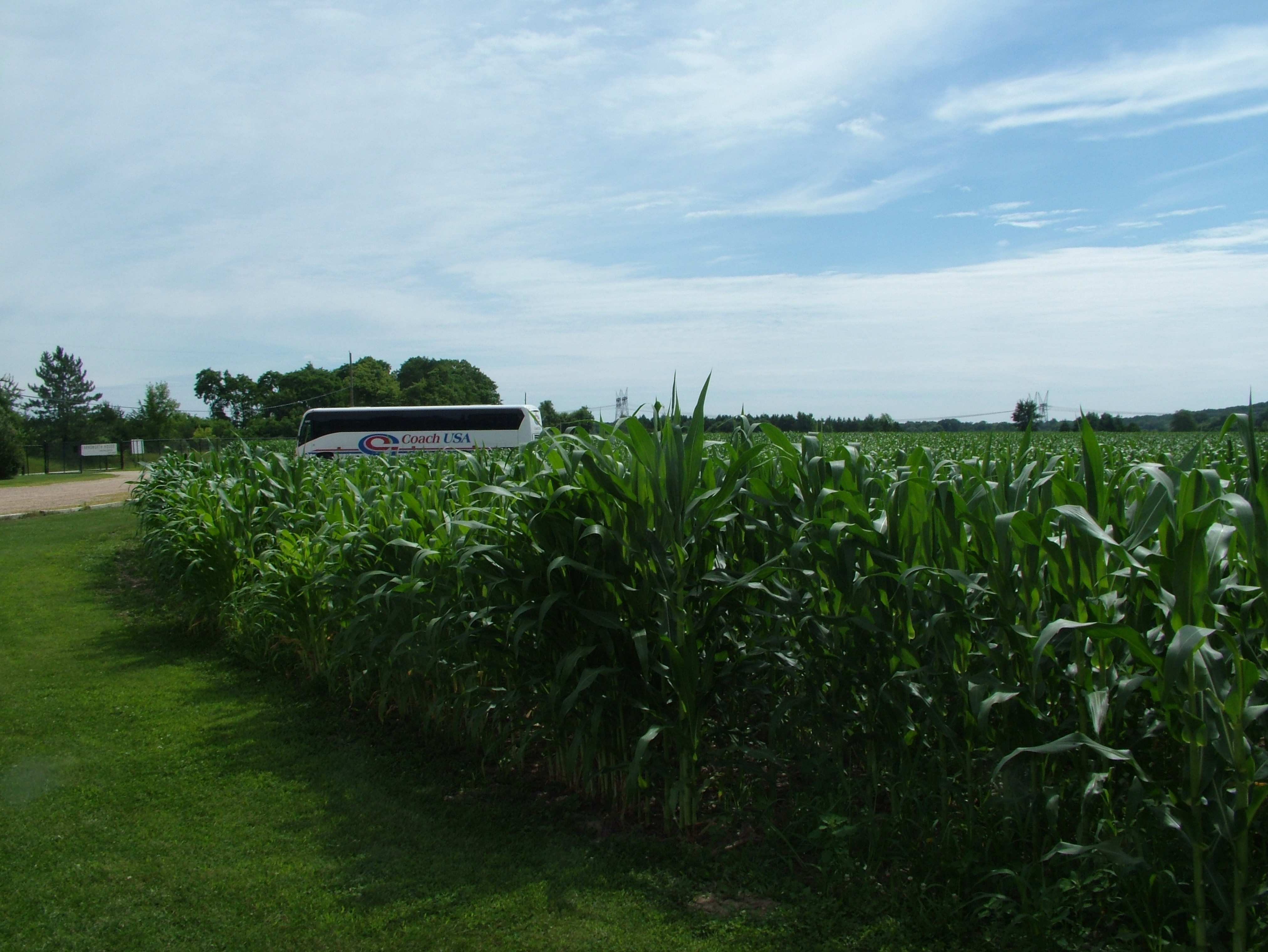 I still prefer the hydraulic solution because it keeps the building in place.  I also reject the irresponsible claims by some that this technology is somehow a big deal.

Let me take you back to to 1854, when Elishu Otis demonstrated the safety elevator.  Hydraulics – which preceded Otis by a decade – powered that elevator.  His innovation was a brake.  Within a few years, hydraulics allowed tall buildings to be practical.  By 1882, four years before Ludwig Mies was born –  you had a company in London running high-pressure mains 184 miles powering some 8,000 elevators.  So if this 175-year old technology worries you, avoid elevators. 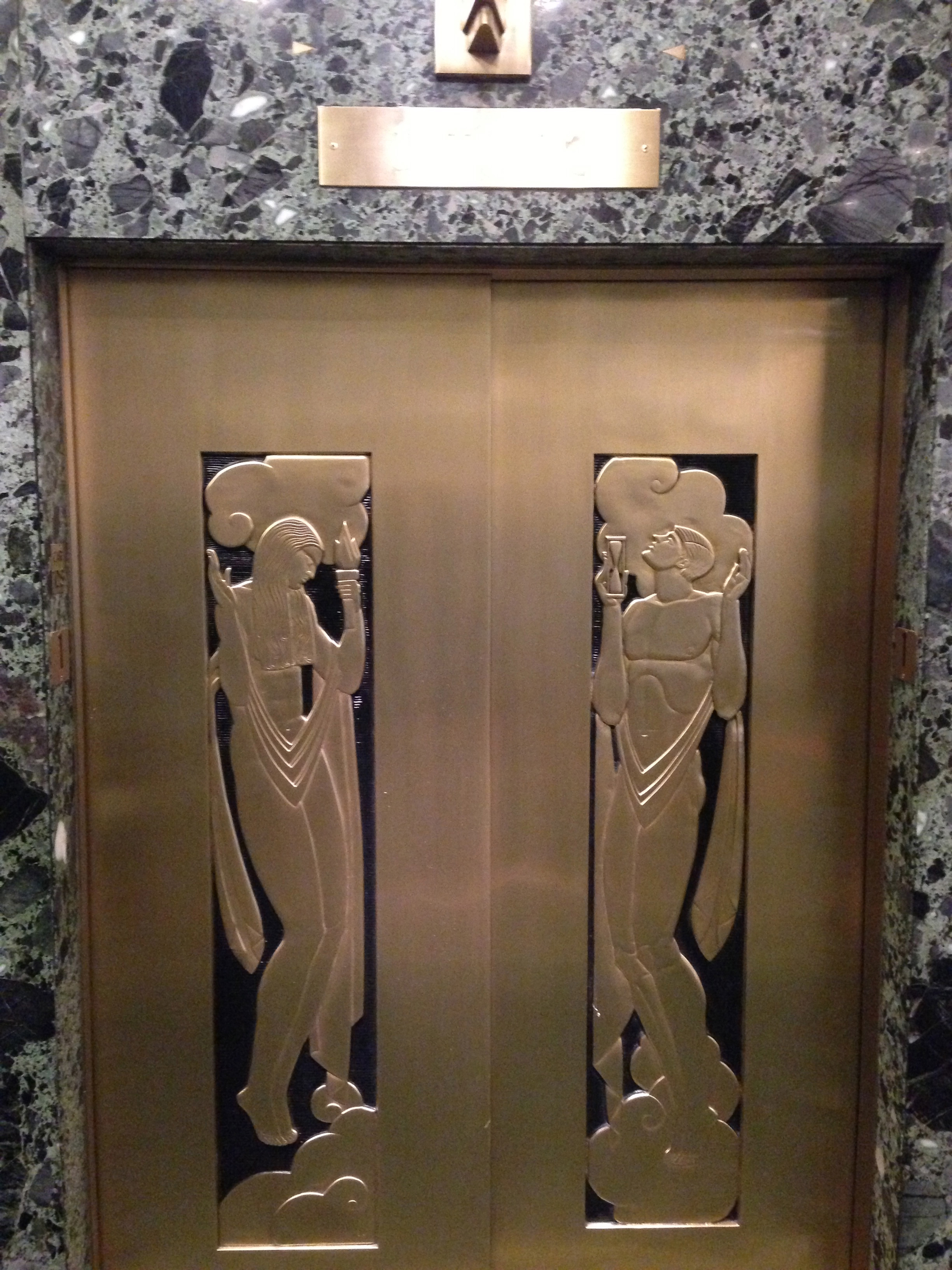 You’ll never get me up in one of those things.

Hydraulic jack technology is older than the zipper, the typewriter (what’s that?) and the automobile.   As the great Bob Silman, who investigated ALL of these options, noted, we put our lives on hydraulics whenever we get on an airplane.  All those noises you hear?  Hydraulics.  Think of all the times you have flown and the hydraulics on the landing gear failed.  Go ahead. 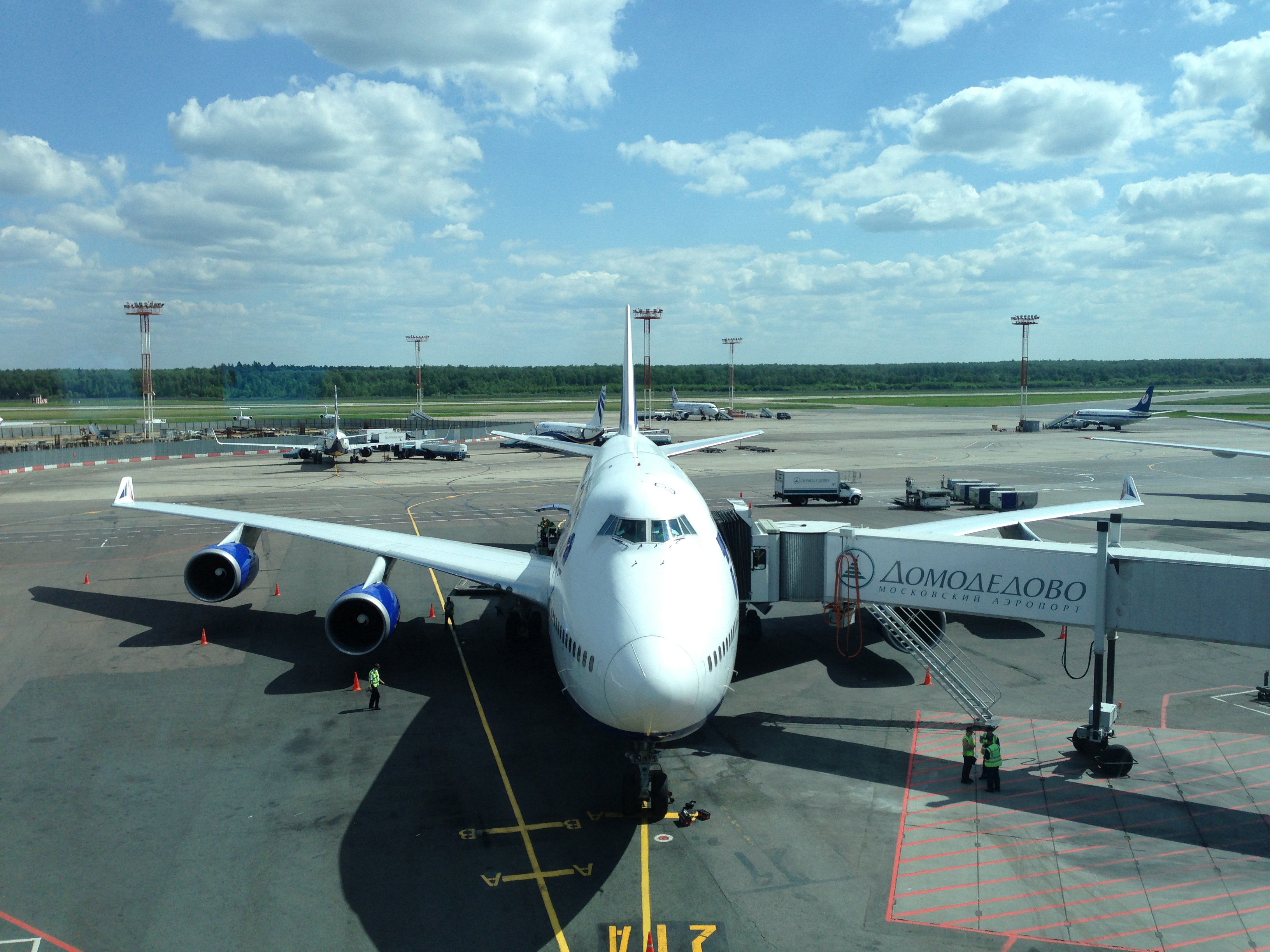 Back to the Decision – and Owning It.

Indications are that this relocation option – like the hydraulic solution – will still meet the National Historic Landmark status requirements.  This is really important and a key factor in the decision in my view.  The relocation option also appears to have the favor of John Vinci – who has no official role in the process.  Landmarks Illinois DOES have a role in the process.   As soon as we at the National Trust present our preferred option Landmarks Illinois will need to make a decision, especially in light of the fact that we have investigated this new relocation option based on their reaction to the hydraulic option. 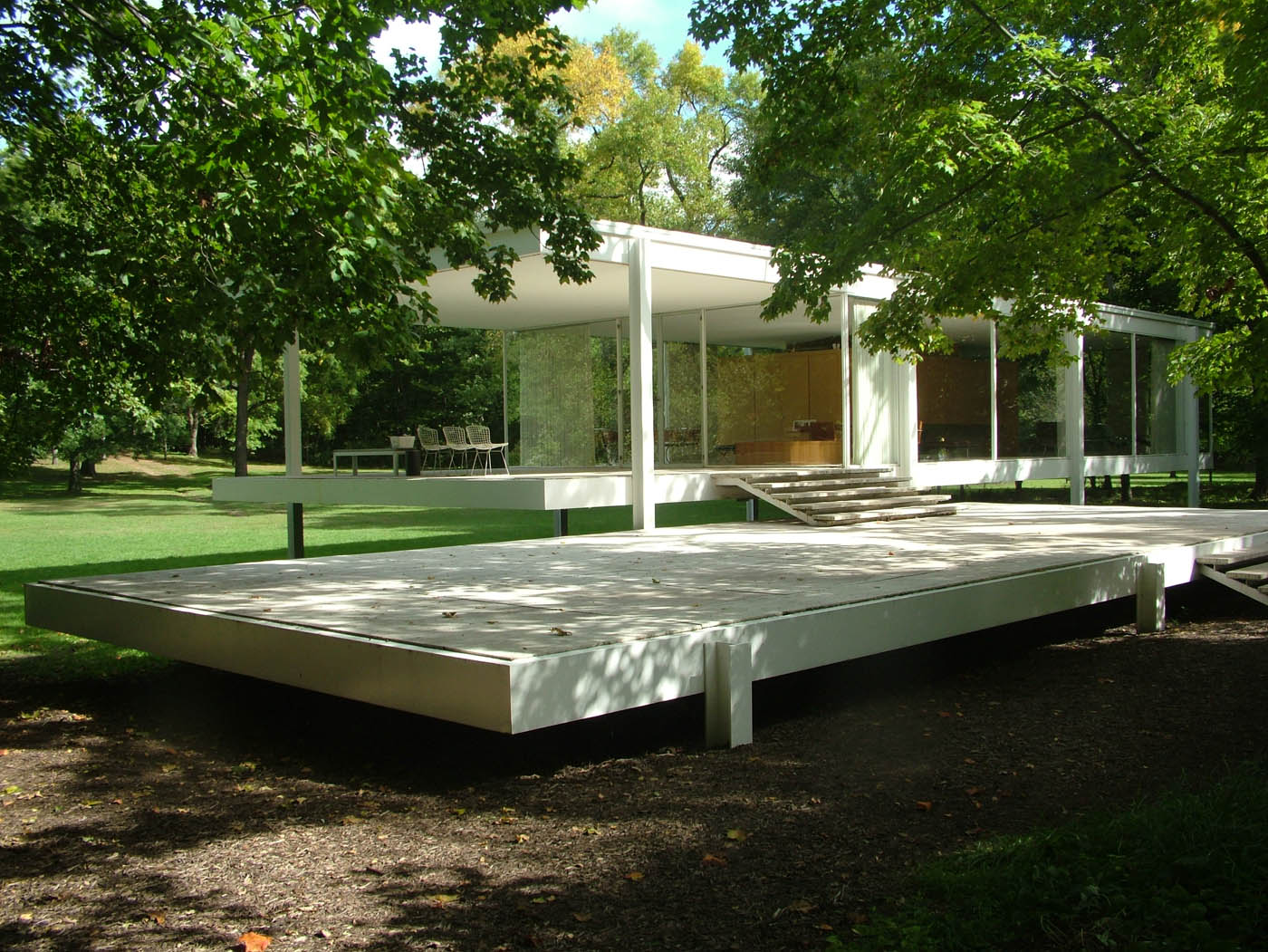 I get it – I have been in this field for over 32 years.  I LOVE being in the John Vinci position of sniping and throwing brickbats against the powers that be, safely outside the decision-making process.  That’s what I did in my 20s, and that saved some buildings from uncaring owners or inconsiderate government entities.  But Landmarks Illinois and the National Trust quite literally TOOK OWNERSHIP of this house a dozen years ago and are now responsible – there is no one but ourselves to snipe and throw brickbats at. 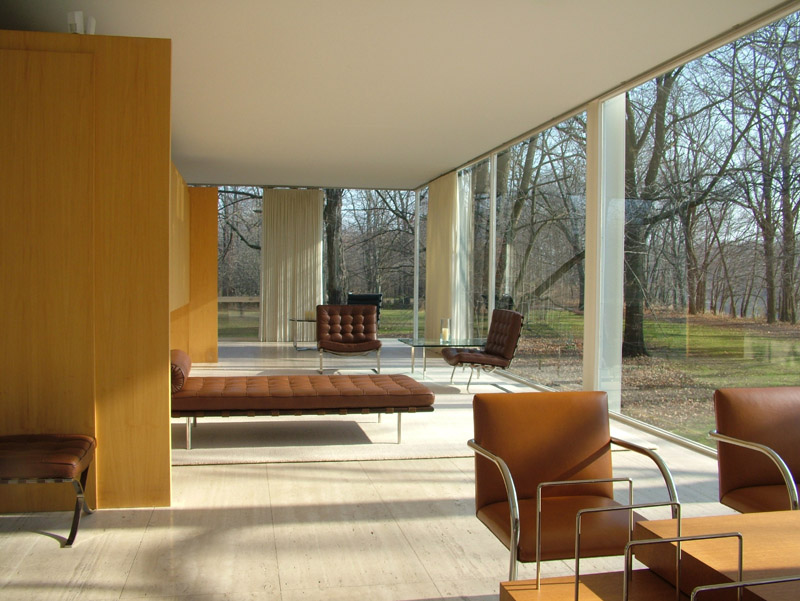 Or stones.  Maybe I should have said stones.  It’s a glass house after all.

So my role of late has been to praise the process the National Trust has undertaken over the last three years and to insist that every organization involved take ownership of the eventual solution.  Landmarks Illinois has made this a Board decision as opposed to a decision of the Fund and Easements Committee.  Fine.  But no decision – like taking no action – is NOT an option.  That decision will likely not be comfortable, but I for one will own it. 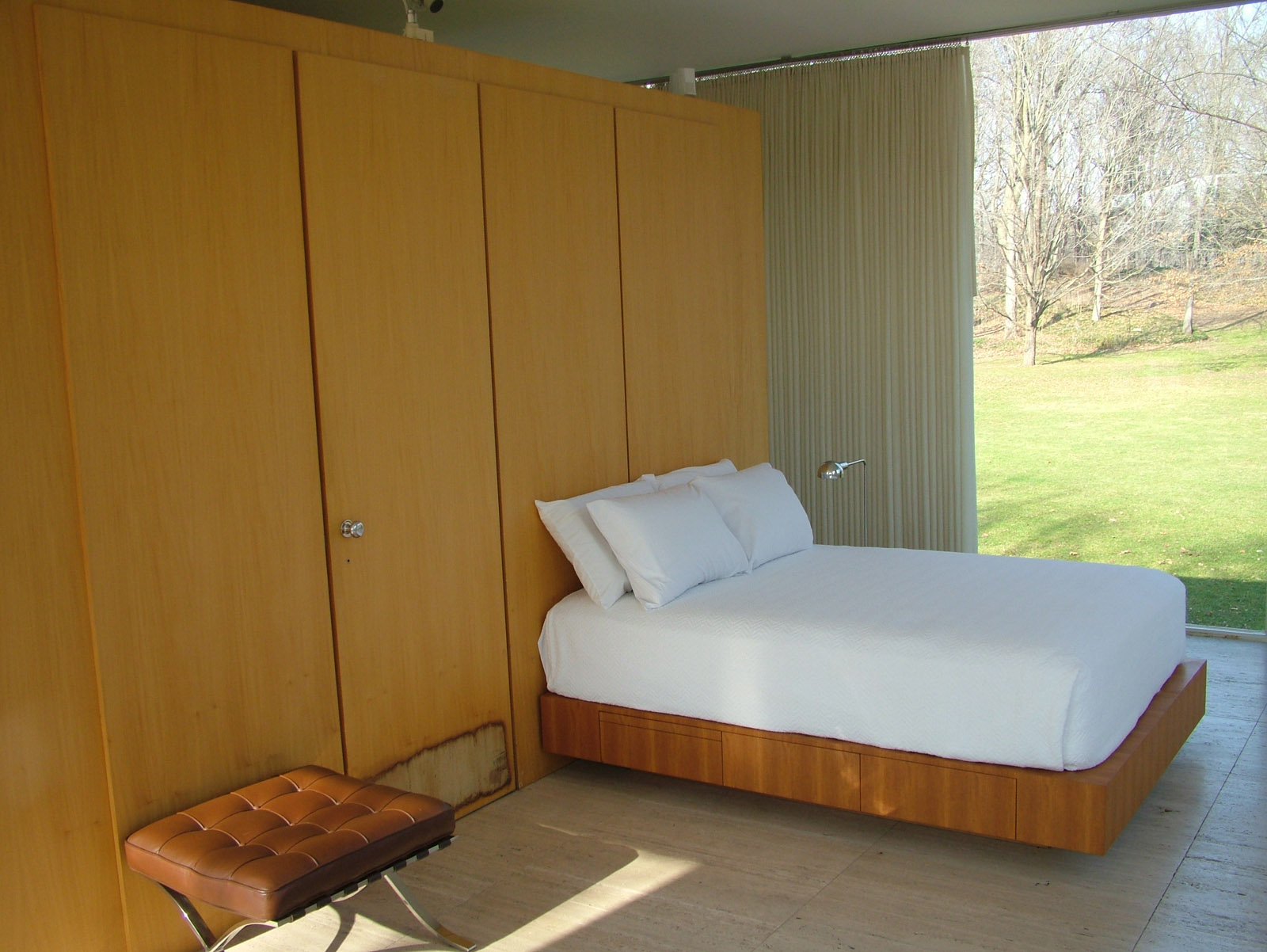 You make your bed you sleep in it.

UPDATE:  A European perspective.  A couple of weeks later I was in Europe with a local preservation group in the Ossola Valley and an Irish ICOMOS Committee Chair.  I mentioned the Farnsworth House flooding problem and without context or prompt they both said, nearly in unison:  “Jack it up.”  This would not be a fraught issue in Europe.

Do you know the Bessemer process which allowed the industrial production of steel, which made the materials of the Farnsworth House possible is ALSO younger than hydraulics?  Don’t worry – the old technology will not be visible – just the purity of the Modern.

One Response to :
Farnsworth House 2015