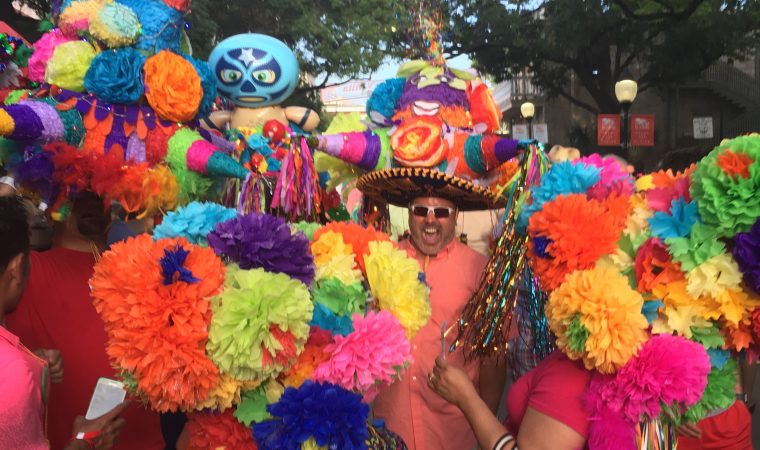 It is hard to imagine the historic craft shops of La Villita filled with nearly twenty thousand people a night.  Friends described it to me, but within a New York minute of NIOSA’s opening a week ago Tuesday, Villita Street was cheek-to-cheek, as thousands went from food booth to drink booth to food booth and back again.  And again. 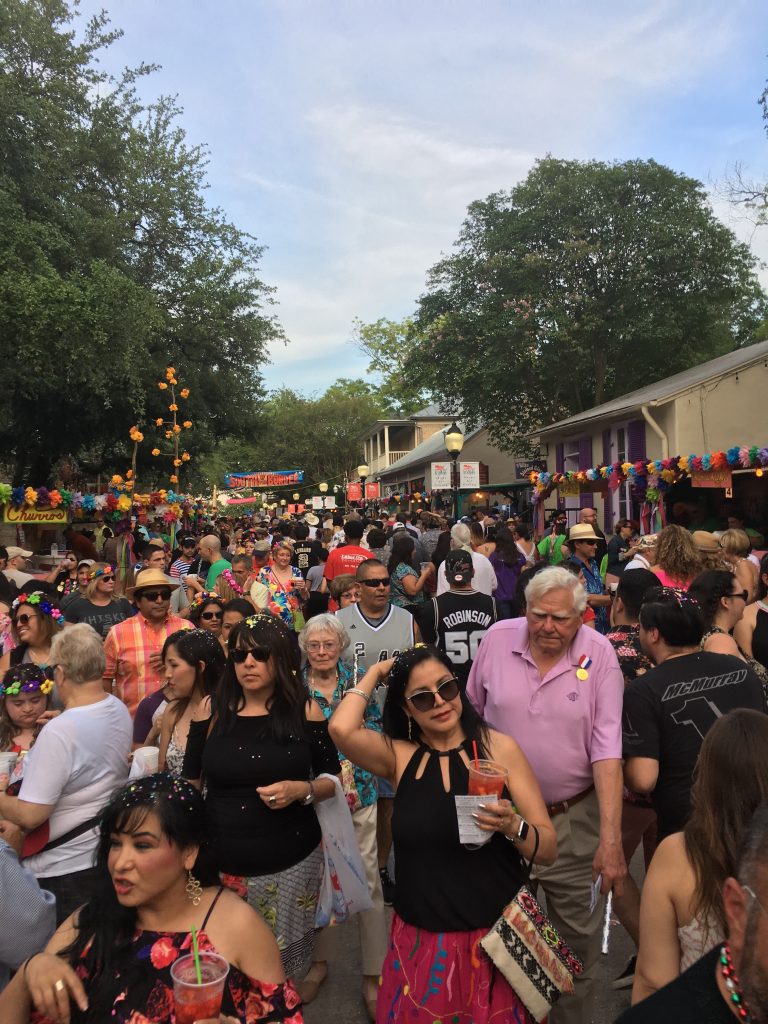 I had naively thought that arriving right at the start at 5:30 would allow us to move through the grounds freely.  Uh-unh. 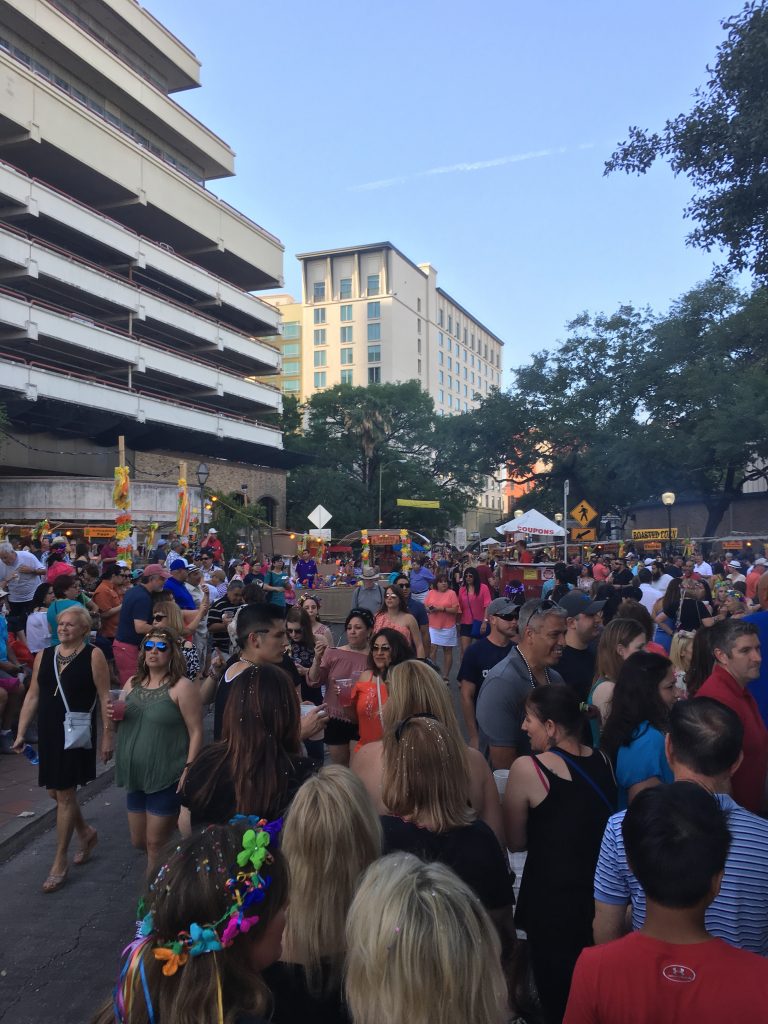 Ron Bauml told me about “The NIOSA shuffle,” which is how you move through the crowd inch by inch, squeezed on both sides and holding your beer and/or chicken on a stick in front of you.  I experienced it each of the four nights. Some 11,000 volunteers make this non-sponsored event possible, unique in the USA. 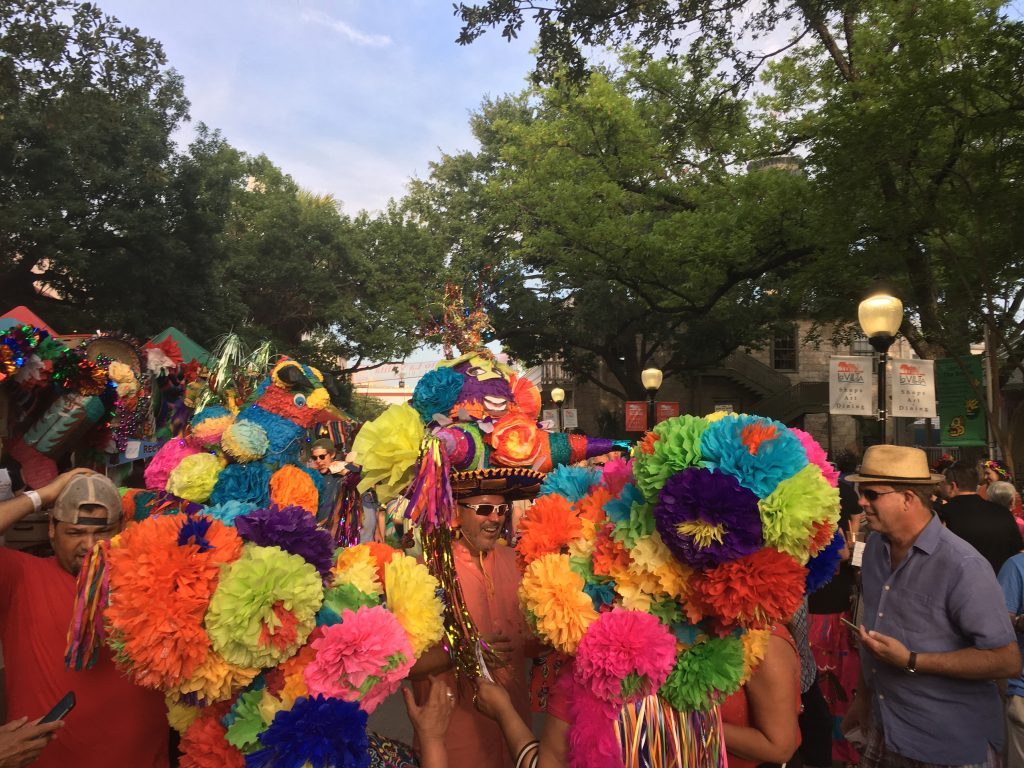 There are 16 regions in NIOSA®, each thematically tied to the cultural history of the city, from Mexican Market to Irish Flats, Sauerkraut Bend, Villa Espana, French Quarter and Froggy Bottom, to name a few.  Each has their own culinary treats, from the famous handmade Maria’s Tortillas to frog legs, anticuchos, bratwurst, egg rolls and something called Blarney Bacon, which was so delicious it must be illegal. 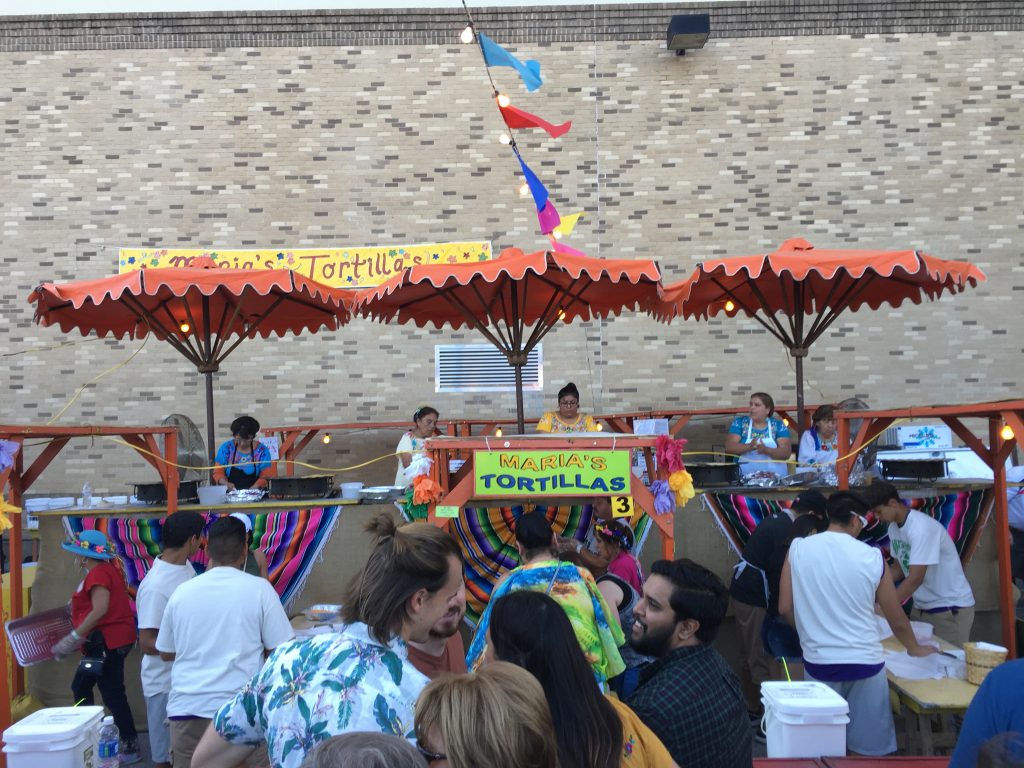 Maria’s Tortillas – worth the wait

There are 14 different bands playing everything – polkas, rock, blues, country, jazz, Tejano, Irish traditional and R & B (The Dukes of Cool let me sit in on bass for one song at Villa Espana!)

Then there are the cascarones: egg shells colored and filled with confetti – apparently a Chinese custom that went to Italy with Marco Polo and thence to Spain and Mexico and here to San Antonio.  San Antonio Conservation Society volunteers made more than 53,000 cascarones this year. 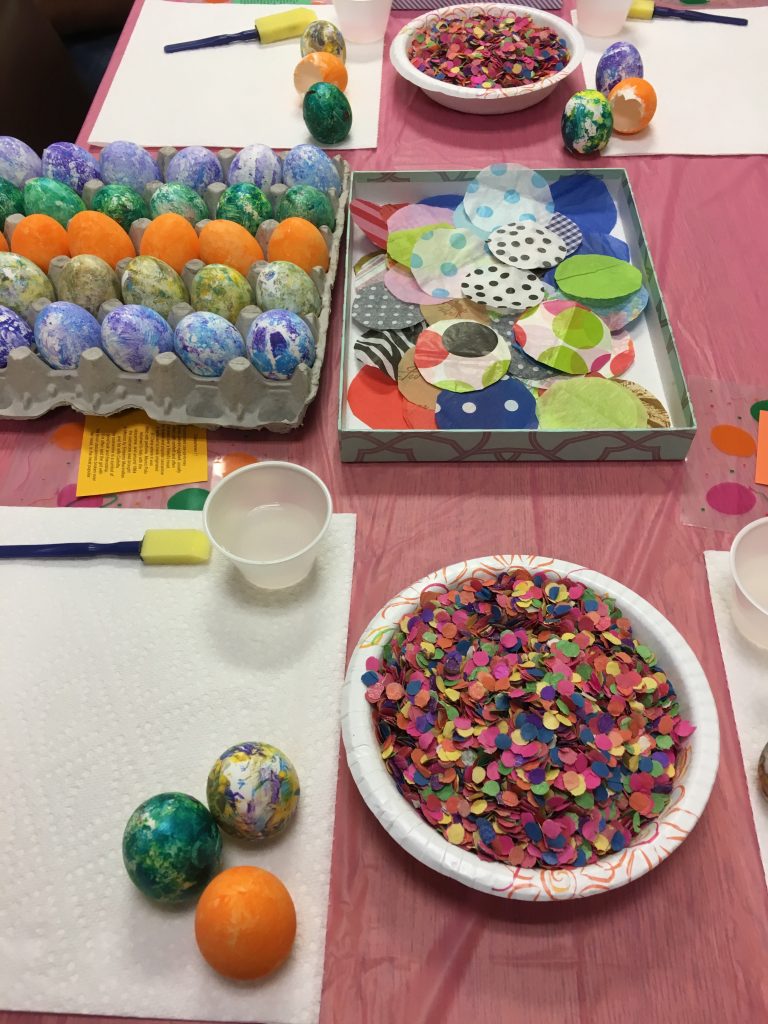 I dutifully saved all my eggshells this year, opening them carefully at one end.

The basic idea is you crack them over your friend’s head (people tend to get along very well in San Antonio).  Unless they are wearing a fabufantastic hat like one of these… 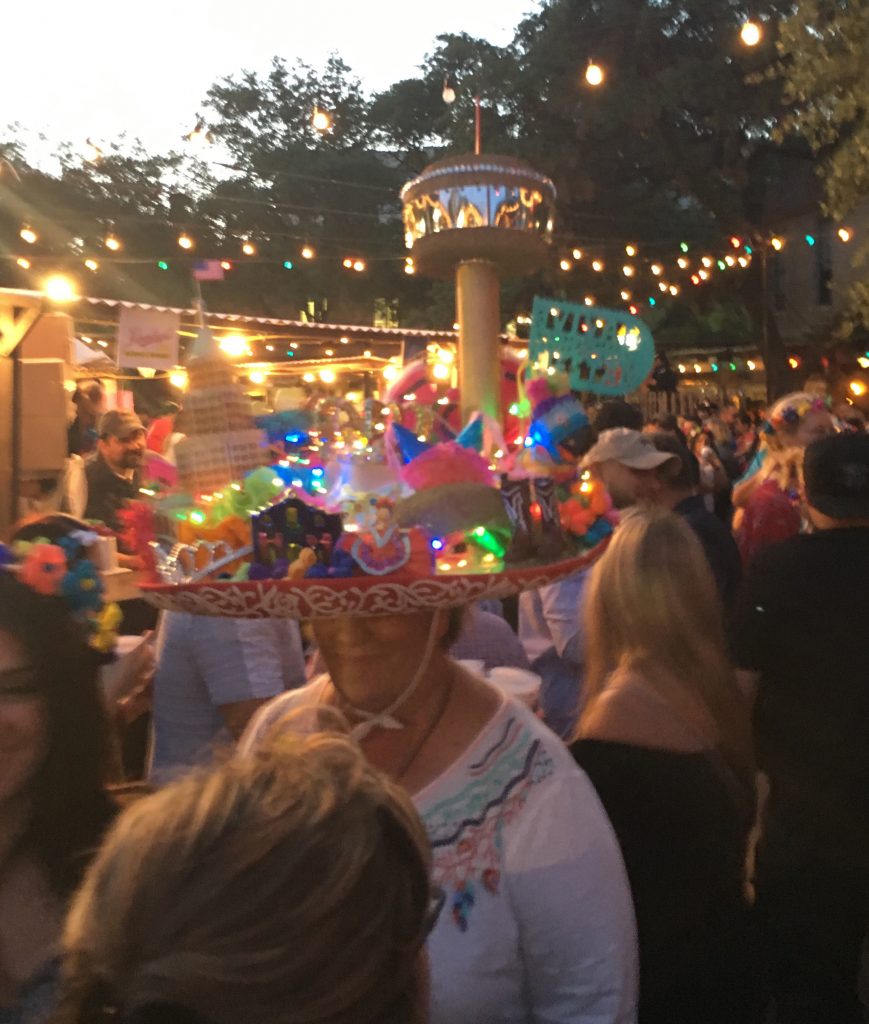 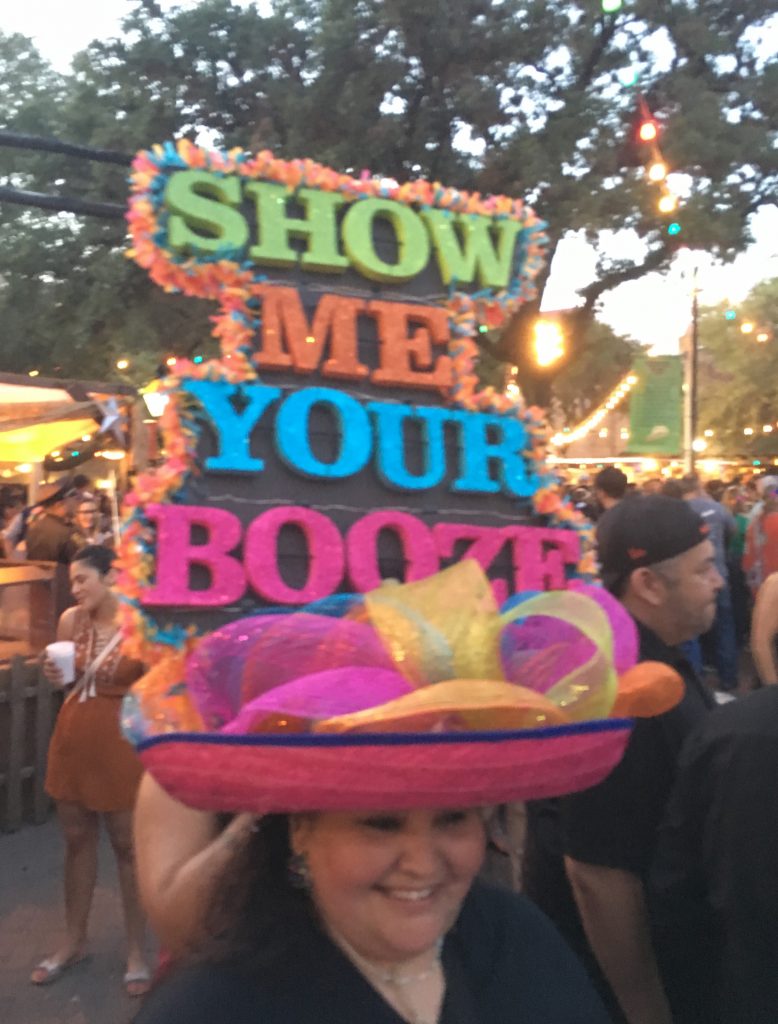 this is the difference between San Antonio and New Orleans…

NIOSA® with its four nights is the biggest of the Fiesta events, but I also attended St. Mary University’s Oyster Bake, 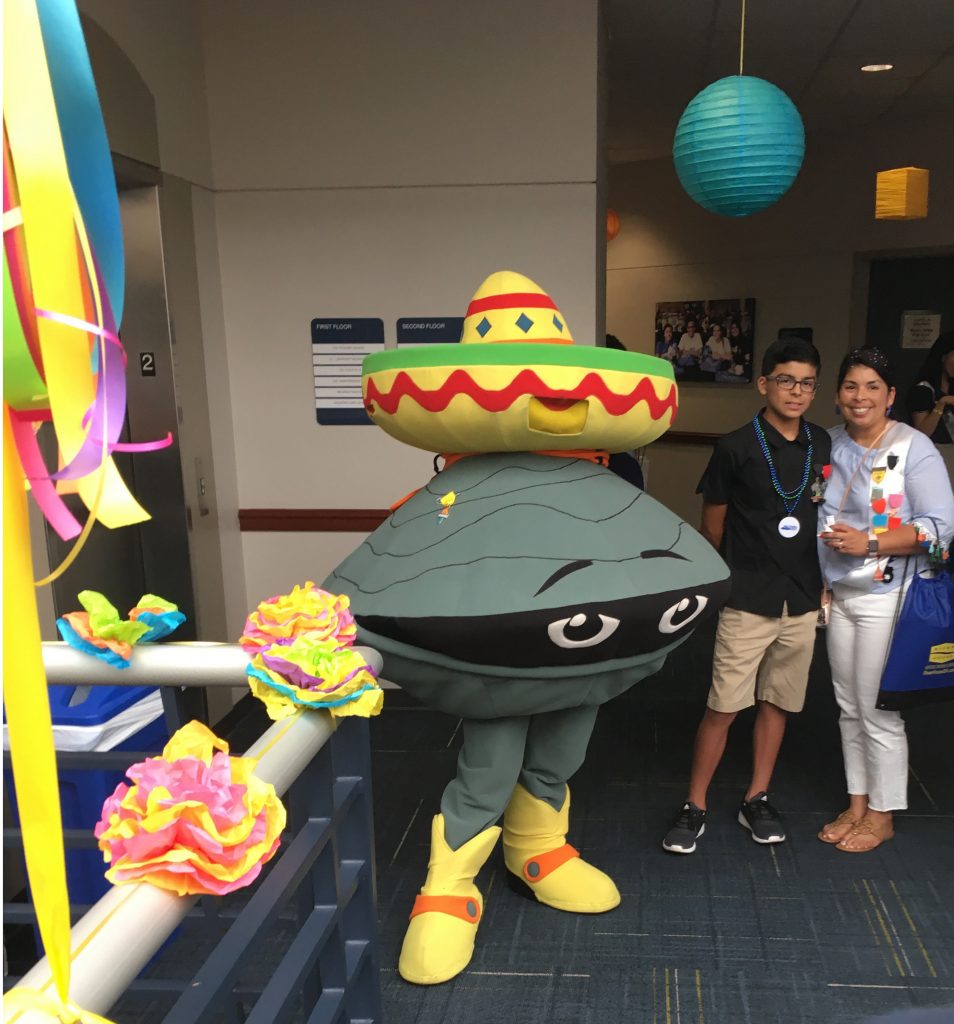 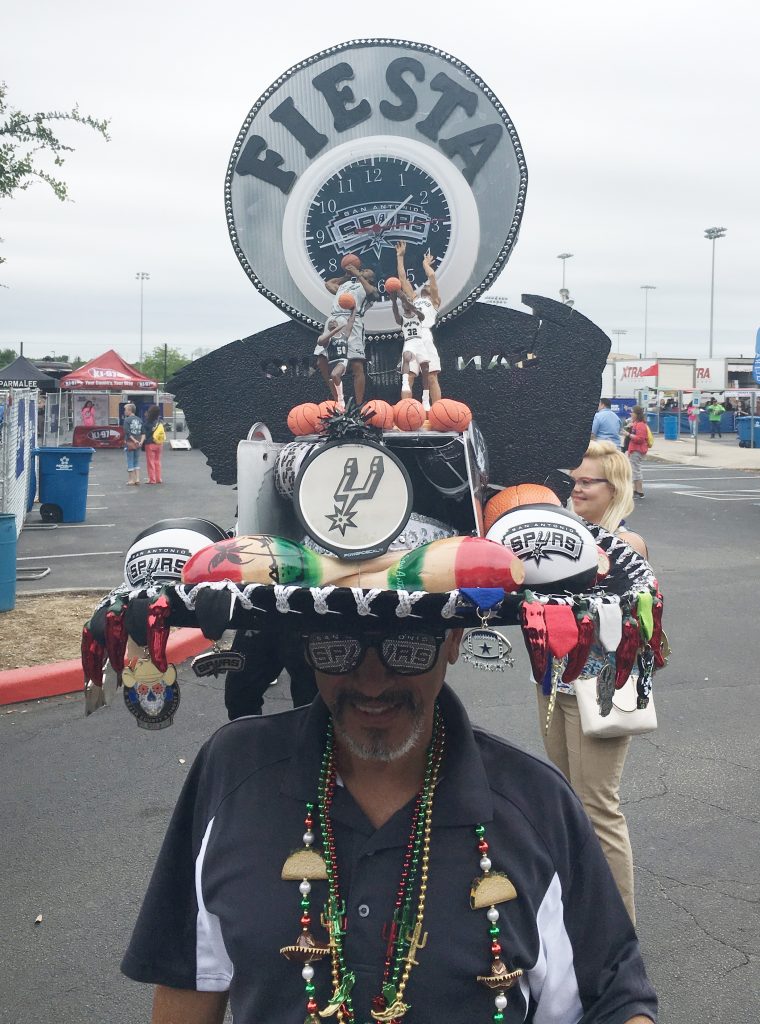 Oh the hats – you gotta love the hats.  Also, you GOTTA love the Spurs.

And the Texas Cavaliers’ River Parade… 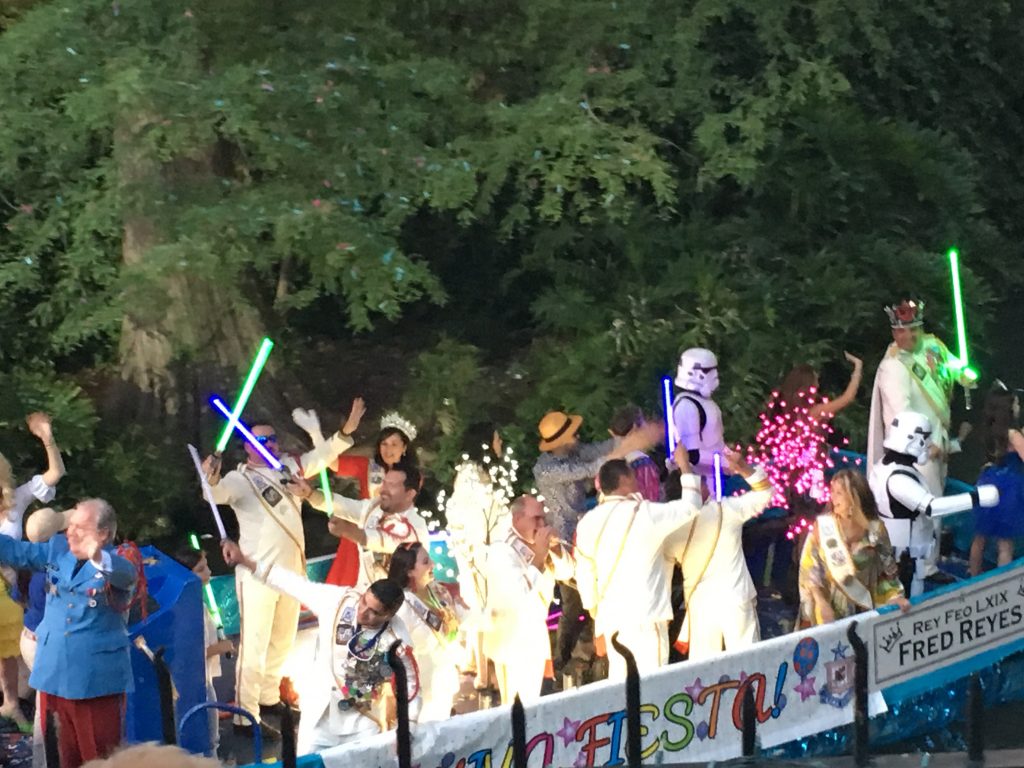 And of course the Battle of Flowers Parade, which last for hours…

Fiesta in San Antonio is the most colorful celebration outside of Holi on the Indian subcontinent, and it has the same sense of joy and play.  There are the great hats, the floral wreaths, and of course the medals – I managed to assemble a pretty impessive collection this year.  Each benefits a charity and is sponsored by an organization, business or individual. 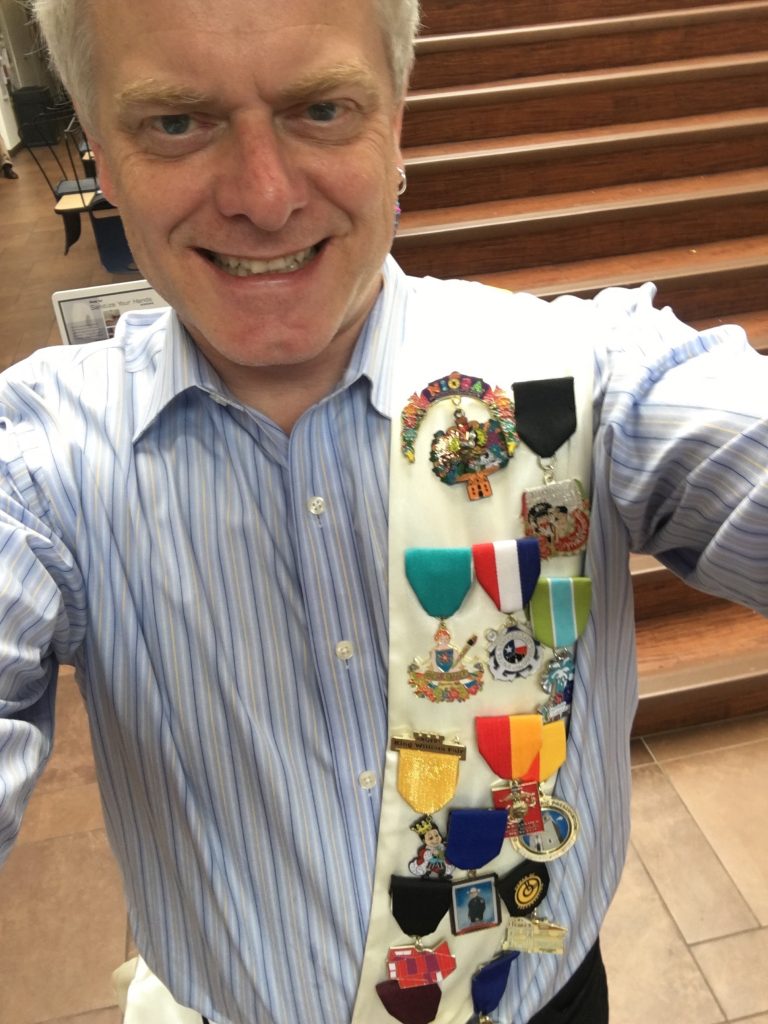 There are more on the back and I collected at least another 20 by the end of the week. I looked like a South American general by the end of it… 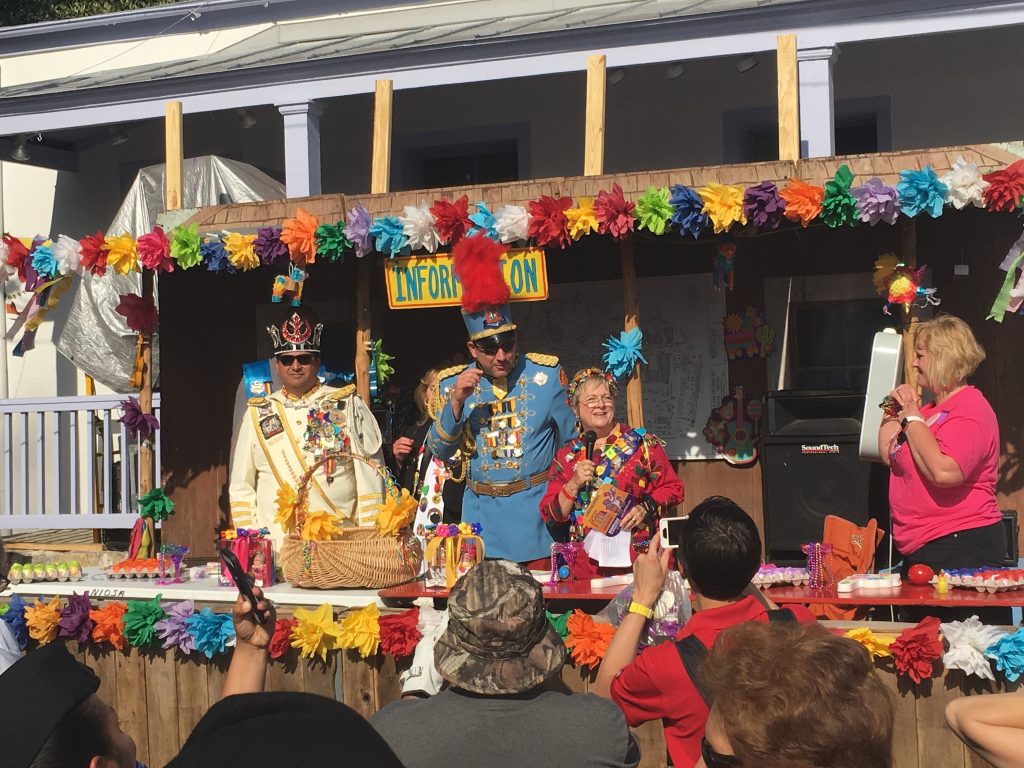 In fact, the traditions include all kinds of royalty, from the official King Antonio and Rey Feo, shown above before the King’s Party at NIOSA®, to the elaborately titled duchesses of the Battle of Flowers Parade, to the everyday folks with their medals and hats and costumes and general desire to be part of a party that celebrates culture in all of its historical diversity. 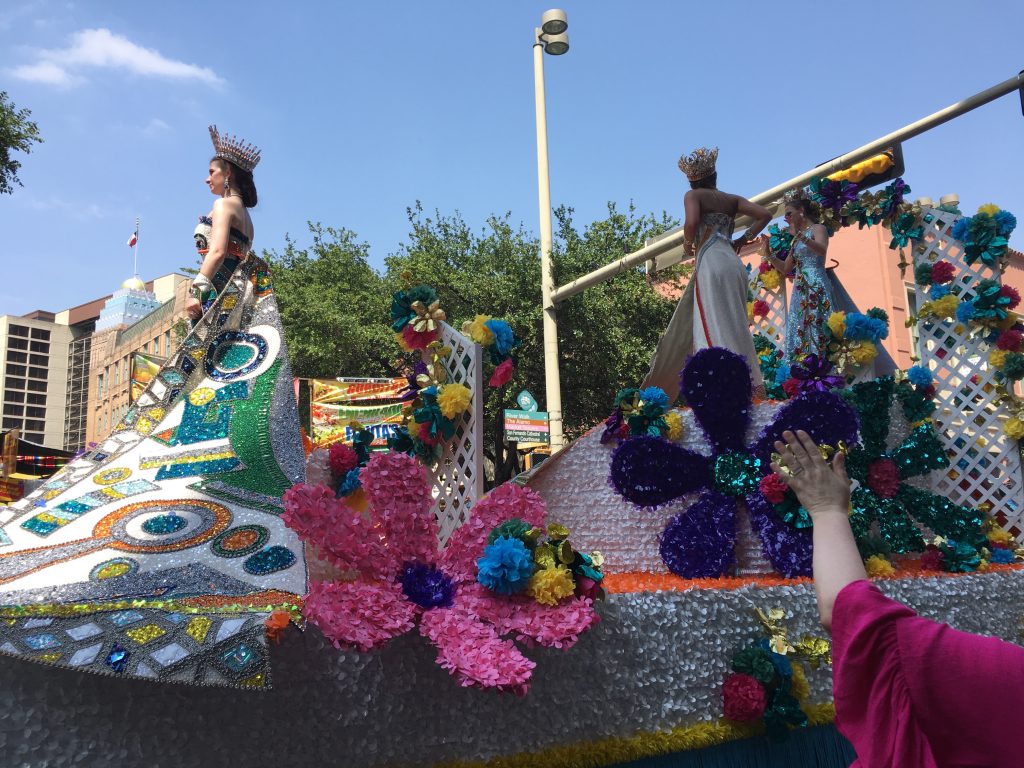 The purpose of the parties – like NIOSA®’s support of historic preservation, natural beauty and cultural conservation – isn’t foremost in the partiers’ minds.  That’s fine.  As I walked through the jammed streets of La Villita for four nights in a row, I was struck by how the ENTIRE community of the city was there, partying together, having a great time with music and food and drink.

The purpose is implicit – this is a community coming together.