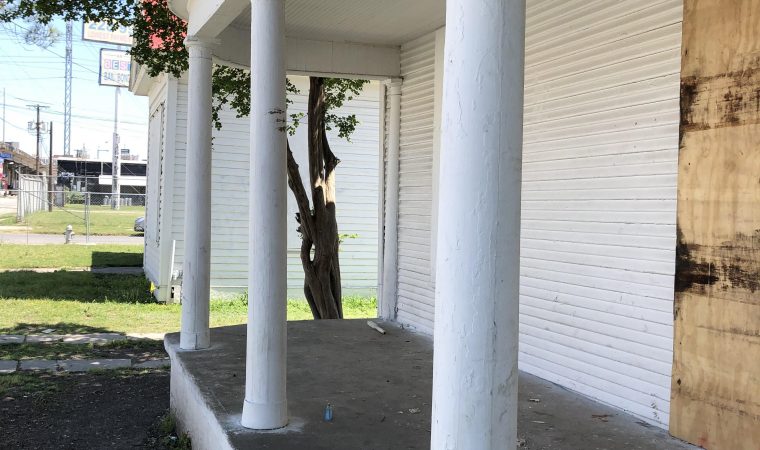 Here is a very intact Victorian home in San Antonio of the typical Queen Anne type: L-shaped plan with front facing gable, decorative balusters, posts and porch trim. It even has decorative brackets with drop pendants that survive on the corner.

Next door we have this house. It is boarded up and a temporary fence was added three weeks ago, but this Queen Anne retains a lot of integrity, from every one of its four Doric order porch columns to original wood siding and decorative shingles in the protruding gables. The house volume is unchanged since 1912.

Next door, also behind the fence, this Folk Victorian gem has a double-munched standing seam metal roof, original siding and original shingles in the gables. It is also boarded up, so we don’t know how many original doors and windows survive, but in my experience, there will be several if not all.

SOOOOOO……. the owner proposed to demolish these three.

I have seen buildings in WAY worse shape get saved.

In fact, one that was on the demolition list when I started at the San Antonio Conservation Society three years ago recently came up in our house hunting.

The owner of the three Commerce houses has a business a block away where he rents, so he bought these “just in case.”

Perfect! Move your offices in there and ditch the landlord!

Um, so then the owner’s representative said they tried renting them but they were having too much trouble. But then the druggies and thugs started hanging out and breaking in, so they need to be demolished.

Because when you demolish buildings, those problems go away?

Then the owner’s rep said he wants to build and apartment building here but has no plans and no timeline.

“There is plenty of room to put in his office AND add an apartment building,” I said. This is not an EITHER/OR.

And then there is money. You rehab these as houses, you can get the city tax incentives. You rehab them as National Register landmarks (that still needs to be done) and you can get a 20% investment tax credit. And a 25% state tax credit. They would totally qualify based on their history, architecture and condition. 45% of your rehab costs paid for.

Since the fence went up three weeks ago the squatters and scrabblers have stayed away. We can only hope the owner listens to reason. Or money. Or the neighbors. Or takes a look at Zillow and sees what has happened to other buildings that someone once thought should be demolished.

Because they couldn’t think of anything else.