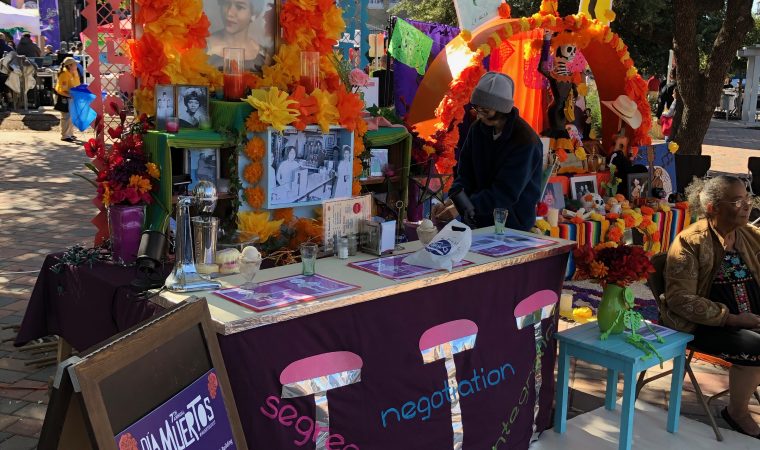 This weekend there is an ofrenda honoring the life of Mary Lilian Andrews, the 17-year old Our Lady of the Lake student and youth NAACP President who spurred the integration of lunch counters in San Antonio. Just a month after the first sit-in at Woolworth’s in Greensboro, NC, she wrote to seven downtown lunch counters urging integration.

A mass meeting was held a week later and demonstrations planned for Thursday, March 17. City, business and religious leaders got together on Tuesday and the lunch counters were integrated Wednesday without incident. Two days later Jackie Robinson spoke at La Villita and compared San Antonio’s achievement to his integration of Major League Baseball.

In a Page 1 New York Times article on March 20, 1960, Robinson said what San Antonio did was a “story that should be told around the world.” For her part, Mary Andrews was photographed getting a Coke at the Woolworth’s lunch counter in the March 31, 1960 issue of Jet magazine.

Mary Andrews sadly passed away 20 years ago but the Coalition for the Woolworth Building worked with her family to develop the ofrenda, aided by artist Chris King and spearheaded by Beth Standifird of the Conservation Society of San Antonio. Even her Alpha Kappa Alpha sorority contributed.

The top of the ofrenda is designed to mimic the cornice of the famed 1921 Woolworth Building, which became a State Antiquities Landmark in May.

Papel picado banners down the side spell out “Civil Rights”.

The front of the ofrenda is designed like the Woolworth lunch counter, complete with salt and pepper shakers, Woolworth’s menu and representations of the legendary Woolworth’s donuts. The “Woolworth’s” legend on the sidewalk at the entrance (still visible on Houston Street) forms a floor in front of the altar.

Mary’s other passions, from piano to Ford Mustangs, are also represented, along with a multitude of flowers and lights.

Placemats with calaveras quote the letter Mary wrote to the lunch counters nearly 60 years ago.

Members of the Coalition and the local branch of the NAACP will be on hand today to answer questions about Mary. We are located right on Alamo Street south of Nueva right at the entrance to the Muertos Fest.

Please come visit during the free festival this weekend and vote for our ofrenda!

For more about the Woolworth Building effort, see The Conservation Society website here!

YEAR LATER UPDATE: It’s Mary’s birthday and we memorialized her on our webpage here.