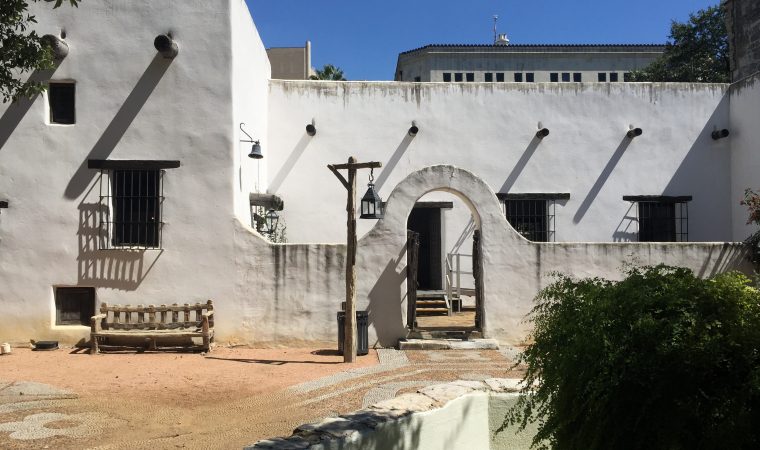 I am helping the City of San Antonio with a virtual tour of the Spanish Governor’s Palace, which is both the only remaining residential structure of the 18th century city and a fascinating document of how historic preservation was practiced 90 years ago.

When you look at this building, you may think of the Palace of the Governors in Santa Fe, New Mexico, and that was a big inspiration. The Santa Fe building was restored right about the time that Adina de Zavala started lobbying for the preservation of this San Antonio building in 1915. By 1930 the city had purchased and restored it and the Conservation Society was operating it.

The building is a rare and singular survivor, but it was never really a palace, and while one Spanish Governor did visit San Antonio in 1720, the building dates to 1722 as the comandancia, or home and office of the military commander of the presidio garrison.

Restored by architect Harvey Smith, he took numerous liberties we would not countenance 90 years later. Despite finding no evidence, he built a fountain and a walled back garden that even he knew never existed because it would convey a romantic sense of refined 18th century life.

This romantic vision of “The Spanish Governor’s Palace” cause Smith to add two rooms that never existed, and interpret other rooms with these elaborate plaques that described a courtly life that also didn’t exist. Each interpretive plaque is then explained by a contemporary plaque below explaining Smith’s romantic embellishments!

Old telephone poles became ceiling beams and old flagstone sidewalks became floors in the restored “Palace” and the whole was filled with period furnishings. The century that the building spent as a tinsmith shop, pawn shop, hide dealer, clothing store and saloon was not interpreted.

This was an era of nostalgic appropriation of historical styles, from the Spanish Colonial to the Georgian, Tudor and Renaissance Revival. This was the time when architect R.H.H. Hugman proposed “The Shops of Aragon and Romula” that would become the San Antonio River Walk.

It was a different aesthetic and a different goal for preservation. Smith did lots of research, but there was precious little to go on for an 18th century building that had been changed a hundred times. No international guidelines for preservation existed yet (they would come in 1932.)

A similar approach was taken by O’Neil Ford when he restored La Villita in 1939-41. There was so little documentary or forensic evidence about the vernacular buildings he was restoring that he simply tried to create “a mood.” Like Smith, he added lots of walls to enhance that mood.

I suppose the goal was to really demonstrate the importance of the historic building by giving it a more glamorous pedigree. There was one reference to a fandango or party in the salon of the Governor’s Palace, so like the 1930s Riverwalk tile mural by Ethel Wilson Harris, a singular incident became a chronic intepretation.

What is really fascinating about the Governor’s Palace – and other sites “restored” in the 1930s is that those acts of poetic license are now themselves historic, and they have added another layer of history.

To me history – basically the same word as “story” – is made richer by more layers of interpretation, by more stories. The primary story you get from the Spanish Governor’s Palace is a sense of 18th century life on the Spanish frontier. But you also learn about the civic life of the 1920s that sought to bolster civic pride with romantic tales of civic origin.

This is the “Child’s Bedroom” that Smith invented out of whole cloth in 1930. His impulse was to illustrate the luxury and gentility of the “Governor’s” lives with some creative construction. Like Adina de Zavala or the Conservation Society at the time, they wanted to glorify their forbears.

My favorite room is the Commander’s Office, not only because it reveals the original rubble stone construction, but because it also reveals the true nature of the building. The Commander used this space to command, but much more to sell household goods and necessities to his soldiers and the general public. Business was so brisk that he added a storeroom behind in the late 18th century, although if you go there today you see religious artifacts and other antiques in vitrine displays.

In the 21st century we understand heritage conservation as more than an architectural design problem, and are careful to find evidence for both the stories we tell and the physical fabric we restore – or choose not to. If somehow this last residential building of the Spanish city had survived until today, it might look very different. It would tell the stories of the presidio commanders with a little less embellishment, focusing perhaps on how the 19th century shops and saloons were a continuation of the comandancia rather than a rejection of it. It would perhaps be called the Presidio Captain’s Residence and it would be without its 1930 additions.

I like telling both stories – the true story of the presidio and its capitans, along with the equally true story of 1920s San Antonians puffing their chests and inflating their history just a bit.