Remember all of the Alamo 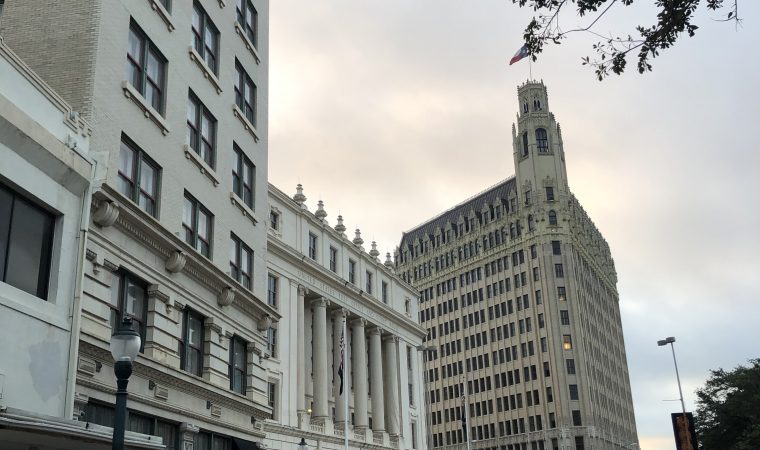 Here are three very nicely designed highrises one after the next. They are the Gibbs Hotel (1909) in a Renaissance/Chicago Commercial style, the Classical 1937 Courthouse and Post Office, and the Deco Gothic verticality of the Emily Morgan hotel (1926). This is in the heart of town just north of the Alamo.

In fact, these three buildings cover the north wall of the fabled mission and fortress. The famous 1836 battle began when Santa Anna successfully stormed the north wall, breaking in roughly between the Courthouse and the Emily Morgan. Commander Lt. Wm. Travis fell but a minute and a half into the battle, also on the north wall, to the left of where the streetlights are in the lower center of the photo.

The chapel, which everyone knows as the Alamo, was the first building preserved by the public west of the Mississippi, in 1883, less than fifty years after the battle. Already this had become the center of town and the large commercial Crockett Block was in place facing the chapel.

The Conservation Society began advocating for the re-use of the Crockett and Woolworth Buildings when the state purchased them nearly five years ago for a new Alamo Museum. This was part of the larger reimagining of the Alamo that began in 2014. Sixteen months ago we presented a concept showing how the buildings could be added onto to make the new museum.

All this is preface to a curious push right now by the Save the Alamo Foundation to garner public support for their Alamo Plan. The most curious aspect of this push is that they don’t have a final design for the plaza. Nor even a preliminary design for the museum. How do you sell that?

Well, they are selling the idea that they will reclaim the footprint of the battlefield/mission walls. A portion of where the west wall was is 10 feet under the Crockett and Woolworth buildings. WHERE IT WAS – these buildings have 15 foot basements so there is NO remnant of the wall.

But let’s go back to the north wall, where all the action happened. Are they planning to take down the Gibbs Hotel and the Courthouse? No.

So what are they selling? An invisible museum? It seems they are selling the idea that the famed 1836 battle will – by itself – attract all sorts of tourists. Calmer heads, like CM Roberto Trevino, are arguing that the 110 years of history before the battle need to be interpreted as well. After all, it is the mission era that made the Alamo part of a World Heritage Site.

The most curious thing of all about the Alamo Plan is not the absence of a design, nor the decision to expose some wall sites rather than others, but the fact that it is driven by an interpretive message that appears to be scripted by a 10-year old boy in 1950.* I visited as a 15-year old a couple decades later and thoroughly enjoyed the tales of heroism and sacrifice. But that is a small demographic.

The 1836 battle is just the starting point for a much richer tale with stories relevant to all peoples and all times. Why don’t they sell that? The more you include, the more money you make – what am I missing here?

*Thanks to Evan Thompson for this quip.

Well, they have a drawing now! The drawing shows the plaza reconstructed as a reenactment of the 1836 battle, with a second story on the Long Barracks, a rebuilt southwest rampart, and lots of cannon and palisades. The drawing, from their Facebook page and in the news, is rendered from a position above the Crockett and Woolworth Buildings, so no news on the museum.

While still clearly aimed at that 10-year-old, it is the first new illustration of the plan in two years, so that is something. The drawing shows reconstruction of the second story of the Long Barracks as well as an earthen rampart at the southwest corner with cannon. I have dealt with the folly of reconstruction in the digital age previously. The drawing also shows lots of living history reenactors, making the whole thing a curiously large investment in a moribund industry.

In a month the Texas Historical Commission will make a decision about moving the Cenotaph, which is a publicly funded portion of the project. No news yet on the museum or other privately funded projects.

FUN FACT: The reason Clara Driscoll insisted on taking down the second story of the Long Barracks in 1913 was that it dominated the plaza and overshadowed the shrine – the same argument for moving the Cenotaph today!

FUN FACT: Do you know that in 1997 when it closed, the proposal was to turn the Woolworth Building into an aviation museum? True!