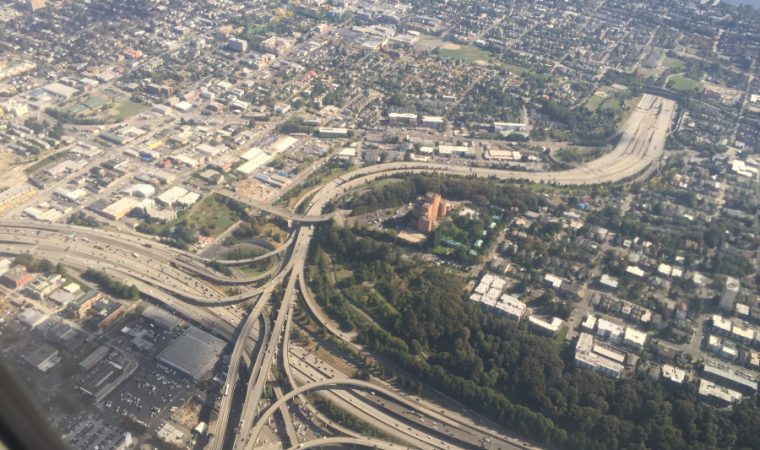 There is an odd relationship in human nature between efficiency and its seeming polar opposite: excess. I was riding my bike this morning and I was thinking about roads as an example of efficiency and excess.

I wasn’t just thinking about the first hard roads in the 1910s and 20s, nor even the ginormous roller-coaster-like interstate interchanges I regularly drive here in San Antonio.

No, what I was actually thinking of were ancient MesoAmerican roads, like the stone staircases in Ciudad Perdida where the Tayrona (in the Sierra Nevada de Santa Marta, present-day Colombia) made high wet jungle efficient and interconnected beginning in the 7th century.

Which was efficient but then they just kept building more and more way beyond the point of efficiency. A little further north, I recalled Richard Hansen in Guatemala’s Mirador Basin declaring that the Maya collapsed because they kept building these lime pathways through their jungle, depleting their resources in the process as the paths grew deeper and deeper. I thought he was overstating the case, but I thought differently this morning.

Roads are very efficient until they aren’t. Like the paradox of building more roads and traffic getting worse, elements of efficiency in the course of human history can indeed become elements of excess until eventually the muscle memory of the efficiency carries the idea of efficiency along like a legend even as you sit two hours to travel thirty miles.

“All roads lead to Rome” and indeed the Pax Romana was based on the efficiency of trade and movement in the ancient world at a level it would not see again for a millennium. I saw a video recently that charged that the road’s led to Rome’s demise by bringing the barbarian armies in more efficiently. Did they turn to excess? Were they status symbols?

In Mechanization Takes Command, Siegfried Giedion talked about guns as the first single-stroke combustion engine, and indeed here is a tool we have proliferated beyond proliferation. From efficiency to excess and from utility to status symbol.

Well, how did I get from roads to guns? How did we get from tools to totems? How does efficiency turn into excess?