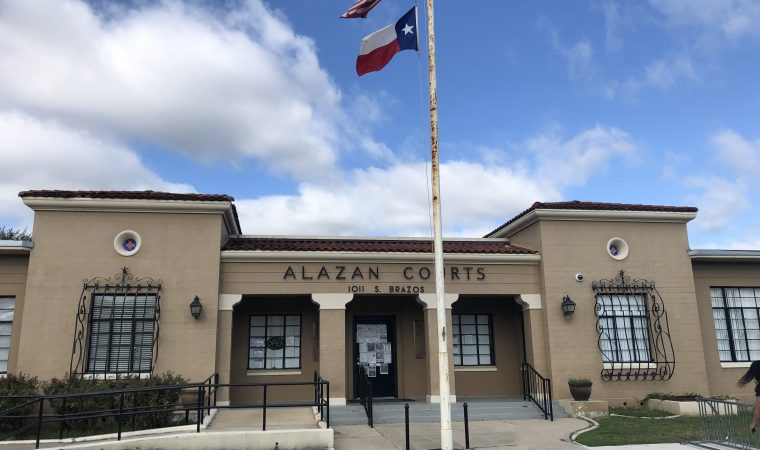 If it wasn’t enough that the San Antonio Housing Authority voted to demolish the Alazan Courts project (1940) just weeks after it was included on the National Trust’s 11 Most Endangered List (see my blog here), they are also moving to destroy the only piece left from Victoria Courts, an administration building from the same era 80 years ago.

Now, the building was found eligible for listing on the National Register of Historic Places by the Texas Historical Commission, so if SAHA is using federal funds or permits, then it is an “undertaking” and would have to be reviewed by THC in its role as State Historic Preservation Office. It doesn’t mean you can prevent demolition, but it can slow it down and allow people to reconsider.

When historic housing projects first became eligible for listing back in the mid-1990s, a lot of people and media attacked the notion that these hoity-toity preservationists were interfering with the noble goal of providing decent housing for the working poor. And no one does that better than a local housing authority.

Except that isn’t how it is done. The way housing authorities have worked for the last three decades is that they raze their old projects, partner with a private developer who gets tax credits for providing housing for people at 50 or 80 percent of median area income, while also providing market rate housing, thus eliminating economic ghettos and giving people a leg up.

As you may have guessed, this model is problematic, because by the time you displace a family for demolition and rebuilding, you are likely to never see them again. Moreover, the familiar pattern is like this – you slowly depopulate the project so when it is time to raze and redevelop, you have a far smaller number of people you are obligated to rehouse.

Interestingly, many clever developers have become adept at combining the low-income housing tax credits with the historic preservation tax credits. They even offered to help SAHA with Alazan-Apache, so we wrote SAHA and testified at their hearing.