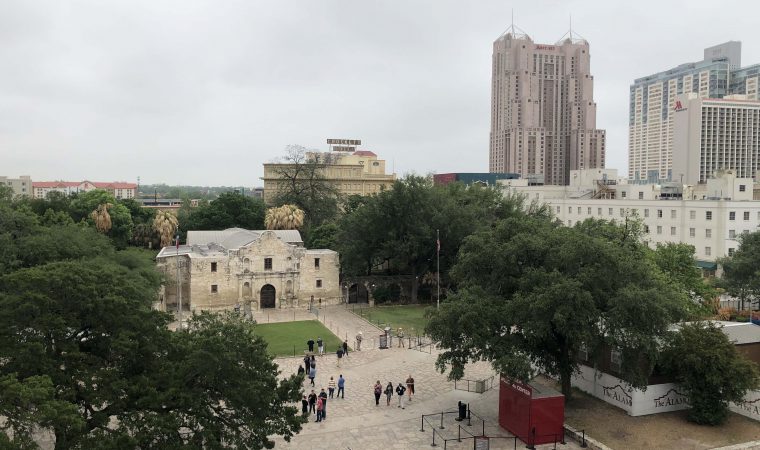 Over a month since the last blog post, but I have been busy with my new UTSA class on World Heritage Management, as well as lots of regular work. The Conservation Society of San Antonio partnered with Esperanza Peace and Justice Center and the Westside Preservation Alliance to promote 503 Urban Loop as a local landmark. Built as a brothel in 1883, it was home to the famous madam Fannie Porter, who hosted Butch Cassidy and the Sundance Kid there in 1901 (Remember the song “Raindrops Are Falling on my Head”? – based on a San Antonio bicycle as far as we know.)

We have been promoting it as a rare remnant of Laredito, the near West Side Mexican-American neighborhood nearly obliterated by highway construction and urban renewal. Despite the media appeal of the building’s Red Light history, it was owned by the Archdiocese from 1913 to 2017 and served as an orphanage, day care center and community resource under the Carmelite Sisters and later Father Flanagan’s Boys Town. One generation of sinners and five of saints. The Historic and Design Review Commission voted unanimously in favor. The owner wants to develop a high rise there, which is easy enough given the size of the lot and the size of the historic building.

We have also started working on a White Paper that will tackle the issue of rampant violations of building permits or work done without permits (or beyond the scope of the permit), which I dealt with in my blog last December “Mejor pedir perdon que permiso”. I recently read about a business owner back in Oak Park, Illinois, who totally built a fence around his business without a permit because he didn’t want to wait a couple months for a permit. This kind of knuckle-dragging personality is appearing everywhere and is seemingly emboldened by the dumbing down of the Zeitgeist. On the plus side, it looks like two of the cases that were in my blog last December, at Labor Street and at Florida Street, both in Lavaca, appear to be following the law now! Wow!

And then we have another building that we would just as soon remove, because it should never have been built in the middle of a park back in 1989. This is in Hemisfair, at the crucial juncture between the sparkling new Yanaguana Garden and Tower Park around Tower of the Americas. It is also adjacent to the Confluence Theater/Wood Courthouse, a superior 1968 structure long on our Most Endangered List.

So, the Park Police were supposed to build a new headquarters just north of downtown, but some public official flubbed the land purchase, so the Park Police did what all good government people do, they started looking around for free land in a public park. This is a tactic almost as old as parks, and I can give you two dozen examples of it in Chicago, with the school in the middle of Washington Park being the most egregious.

Turns out it isn’t just the biggest built intrusion into Hemisfair Park that the police want – they also need 300 parking spaces because because. Oh and bulletproof glass because nothing supports the child-friendly Yanaguana garden development like a fortress! We offered a statement opposing the intrusion. It is not far from the Kusch House, recent beneficiary of a high six-figure grant from Bank of America for restoration.

Meanwhile, the Conservation Society nervously awaits the news about the ongoing construction at Alamo, Nueva, and King Philip Streets around Maverick Plaza. We had been planning A Night In Old San Antonio(R) last year without Maverick Plaza, but the construction on the adjacent streets has a much bigger impact on our event, scheduled for April 5-8, 2022.

Now some good news! The City Manager has reorganized and put a new “Transformation Project Division” under Office of Historic Preservation exec Shanon Miller! This includes Hemisfair, La Villita and many other downtown cultural projects. Shanon is an old friend and super competent, so this bodes well! More culture coming soon!

Oh, TPR did this great recording of us sharing the 97 1/2 year history of the Conservation Society!

Well, the parking spaces and bulletproof glass are gone, but it looks like the Park Police will be in that building in Hemisfair. Darn!