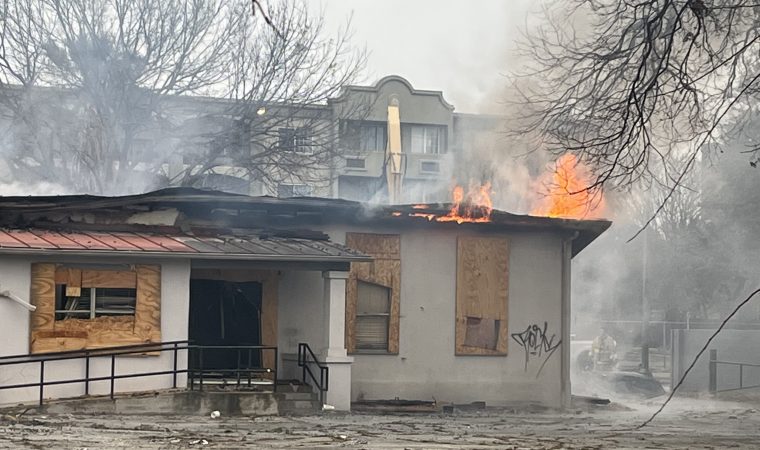 It was a cold night, dipping below freezing, and the morning saw another fire at the landmark site 503 Urban Loop, which had suffered a small one in December attributed to repeated infiltrations by homeless. This time it looks like a total loss, just two weeks after the owners asked the Conservation Society, Esperanza Peace and Justice Center and the Westside Preservation Alliance for another delay of our Request for Review of Significance to landmark the site. We submitted the request last August.

An important visual link to important history has been destroyed. This history includes the only reminder of the city’s Red Light District as it was built originally in 1883 as a brothel by Aurelia Dashiell and hosted Fanny Porter and the Wild Bunch of Butch Cassidy and the Sundance Kid at the turn of the last century. It also had a much longer history as an orphanage and day dare center for the bustling Mexican-American Laredito district for over a century. Bishop John Shaw purchased and rehabbed the building in 1913 and the next year the Carmelite Sisters opened a day care and orphanage to serve refugees from the Mexican Revolution.

The new orphanage and day care center brought Reverend Mother Mary Teresa to San Antonio and Mother Mary Felicitas took charge. The noted midwife Ramona Ramos ran the nearby Casa de Maternidad and was likely involved. Most importantly, the building was one of the ONLY sites associated with the Laredito community that survived. The other is Casa Navarro, which the Conservation Society saved in 1959.

The erasure of Laredito is nearly complete now, thanks to this fire. It is always fire, and it is always gut-wrenching to lose these visceral, haptic connections to our shared history. I remember walking the dog in Humboldt Park Chicago in 1992 and seeing that the stunning Humboldt Park Stables had burned in what turned out to be an arson fire.

I remember 2006, when three Louis Sullivan buildings were lost to fire during the 150th anniversary of his birth, two by careless rehab contractors.

What makes this conflagration at 503 Urban Loop in San Antonio so disturbing is that it removes an important connection to a community that has seen far more than its share of erasure – deliberate and otherwise – for more than half a century.