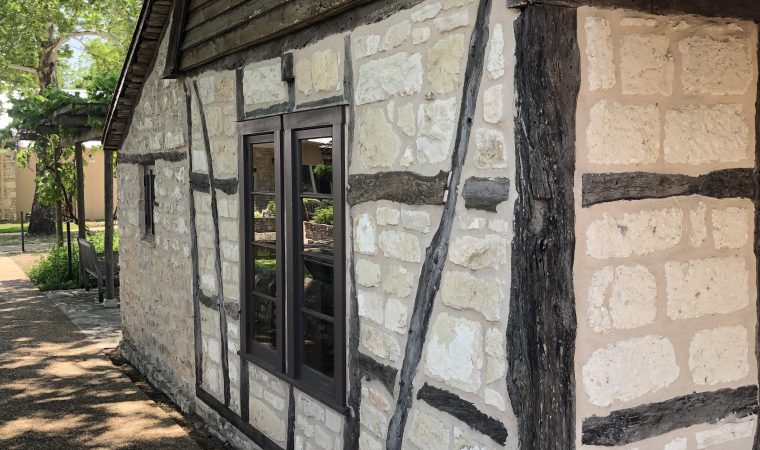 A week ago I joined the Vernacular Architecture Forum’s tour of the Hill Country, and it was replete with fachwerkbau, which is the German word for a type of building construction called half-timbered in English. Basically it is heavy timber joinery infilled in the wall plane with a local masonry material. In the Hill Country, that material is often local limestone.

This Old World technique came naturally to region settled in the mid-19th century by German farmers. Often they might begin, as at the 1856 Faltin House in Comfort, with a log structure, adding fachwerk sections over time.

The Klingelhoeffer House in Fredericksburg was originally built as a fachwerkbau “dogtrot” with a covered open passage between two rooms. The passage was later filled in and more rooms added to the rear.

One amazing little building was this fachwerkbau Chapel in Fredericksburg, which appeared to have been made entirely of extremely unruly curved logs.

A real cool feature here and in another house about a block away were the visible joiner’s marks, which told the builders which pieces of heavy timber fit next to which others. They were generally done in Roman numerals, although with “VIIII” substituting for “IX”!

Here is a view of the whole chapel

Most of these are not generally open, but you can visit the Pioneer Village in Fredericksburg and see the excellent Kammlah House and store, where you are treated to many view of heavy timber and fachwerkbau.

The area also has many of the rock houses, and I have to give props to Baylor’s Kenneth Hafertepe, who wrote the excellent The Material Culture of German Texas, which I wish I had read prior to working on a National Register nomination for one such rock house. They are ubiquitous in the area.

The Tatsch House in Fredericksburg has an amazing large hearth that appears to have been added after initial construction. This is a classic Hill Country “rock house” which often started with a single cubical rock room, with sections added over the years.