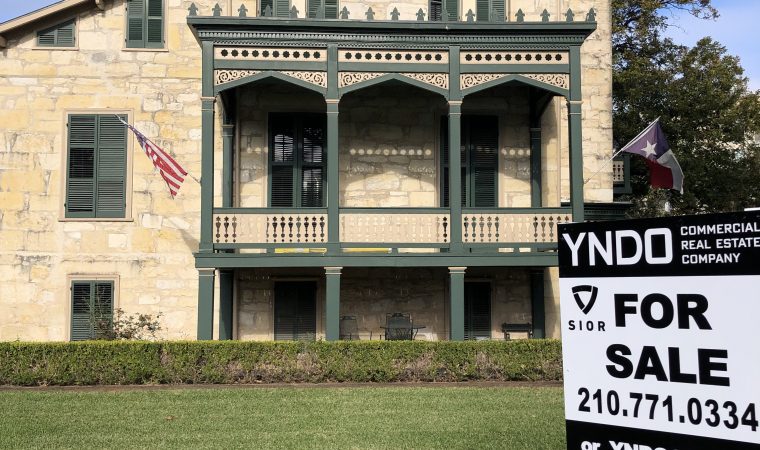 The main image here is our 1870 Wulff House, now for sale after 47 years of Conservation Society ownership. We maintain all of our properties with regular maintenance and cyclical maintenance for major systems and features like roofs, porches and facades. We need to be good stewards and set an example. This story is not about us.

A year ago I wrote a blog about how preservation laws and agreements were just being ignored. This week the ongoing story of the Whitt Building took another turn when the owners filed a press release (and a lawsuit) against the city for preventing their demolition of the Whitt Building. The Whitt made news back on Memorial Day Weekend when the City briefly ordered demolition of the structure after the roof collapsed a bit more, only to overrule itself when a structural report and the Historic and Design Review Commission held an emergency meeting to save it.

The story really begins in 1990, when prominent local family who owns the restaurant behind the building, bought the structure, which is a landmark in the Cattleman Square district west of downtown. So….they bought a LANDMARK and then left it out in the rain for 30 years, hoping for the worst. The problem is that this particular building has a concrete structure with mad cred, so much so that the roof does not hold the walls together as it does on many other buildings.

The press release has already had an impact the trailing lawsuit likely can’t match, eliciting sympathy for the poor owners of this eyesore.

Which they bought thirty years ago. WHEN IT HAD ALREADY BEEN A LANDMARK FOR FIVE YEARS. You can see why I don’t have any sympathy – this didn’t sneak up on y’all.

But the press release is timed very well – there is another story about a guy who bought the shotgun house next to his own for the purpose of tearing it down so his kids could play in a bigger yard. Unlike the owners above and below, they were not aware that the building was being considered a landmark. Add the Whitt owners’ press release and the pity party gets some legs.

So maybe this year’s theme is not “Mejor perdon que permiso” but “Feel bad for me, look what I caused” or “Pity the Negligent.” Same story at 503 Urban Loop, which I wrote about last time, owned by ANOTHER prominent restaurant family. We got a tour not long ago and the homeless have taken it over and trashed the inside. They have not trashed the structure, but you got the sense that the tour was meant to make you feel bad for the poor owner, as in the Whitt Building press release.

Dude, I’m old. I’ve seen this muck a thousand times before and you can’t tell me this four-by-four 1883 column is going anywhere.

This is called demolition by neglect. The phrase correctly captures the agency involved – it is the owner’s responsibility, and no amount of press releases (or lawsuits) can paper over that.

Meanwhile in the neighborhoods, out-of-town developers are famous for buying up properties and letting nature do their dirty work. This is the second fire at this house which has been laying fallow due to absentee owners.

I have heard building owners explain how hard it is for them to secure their property.

So why is it still their property?

Call me old-fashioned, but I take responsibility for my property and I feel cheated when others get away with doing the opposite. 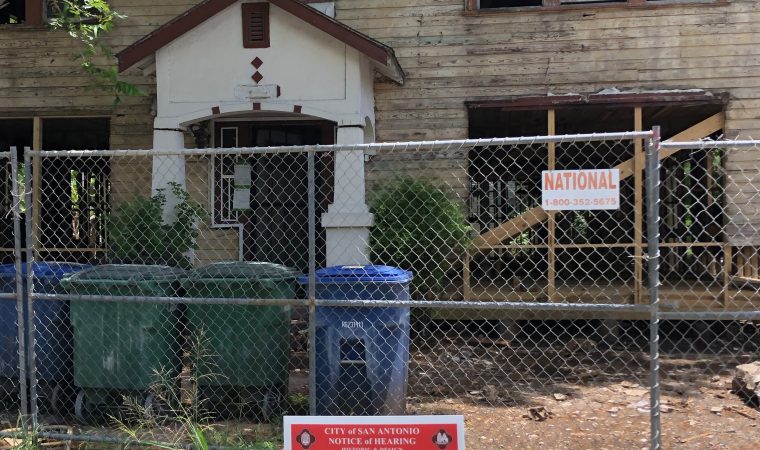 For as long as historic preservation ordinances have been judged appropriate exercises of the police power (40+ years) they have included provisions for economic hardship. This makes sense, if a building is so far gone that it cannot be economically rehabilitated, there should be an exception. But how did it get there? And what are your (legal standard spoiler alert!) “reasonable investment-backed expectations?”

See, San Antonio is pretty good at fixing old buildings that people in other towns won’t. So, when you hear that someone is trying to tear down a salvageable house, odds are they aren’t from here. And their claims of economic hardship? Even sillier.

So, let’s say you owned this house for eight years. During that time you could have invested a couple thousand dollars a year and slowly brought it back to life. Or you could ignore it, allow the homeless to congregate there, and hope that your investment would turn – magically – into a lucrative vacant lot. Except it’s not magic and it is very deliberate. Even the well-worn phrase “demolition by neglect” sounds more benign than malignant, and this behavior is malignant.

See, this isn’t some poor guy who can’t maintain a house. This is an out-of-town investor who has more than a dozen business entities, each of which owns one of these houses in the neighborhood. This isn’t economic hardship – this is malignant neglect and a business model built on NOT taking care of the assets you own.

How do you argue economic hardship when you have created all of the conditions that made the building expensive to rehab? What are the “reasonable investment-backed expectations” of this business model?

And how do the neighbors like it? Well, if you are behind one of these single-house-owning-LLCs, you should reasonably expect that your investment and your business practice model are going to piss off the neighbors. Indeed, that is one of many reasons for putting the asset into a one-off corporate entity – to hide from the neighbors.

Heck, those pesky neighbors might insist that the city enforce the same regulations on you as they do on them. What’s that called? Equity?

No, not that kind of equity.

Time for a new business model.

An even better business model: Buy a perfectly lovely old house, DO NOTHING to the point of actively resisting neighbor’s attempts to lease it, encourage vagrants to collect on the property, and then WAIT for the neighbors to demand demolition because of all the problems the property is causing. YOU aren’t causing the problems, the property is. Did I mention you needed to excise your moral compass and human integrity to follow this business model? No problem? Good!