The problem and beauty of China 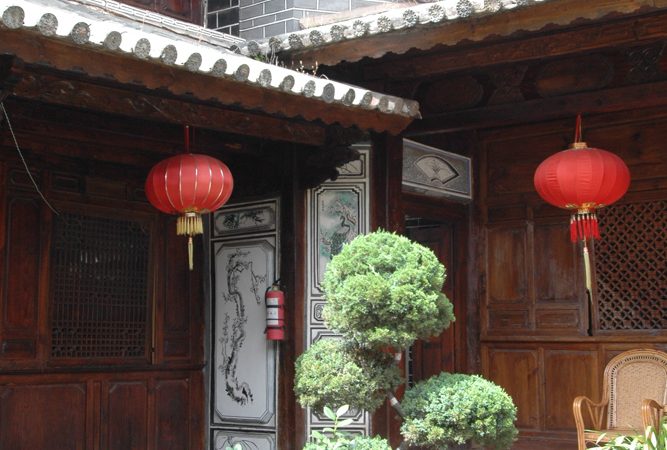 The problem and beauty of China is that nothing stays the same. This is why it is the middle kingdom, the sensibility and experience of all humanity.

We are just back from a 3-week preservation trip to China. We go to Weishan, one of the few communities there with a true commitment to preservation. It is in far southwest Yunnan province, in the Mekong Delta, and it shares many cultural groups with southeast Asian nations like Thailand, Laos and Burma. It is a beautiful place, but also very real and everyday. The food is better than anywhere. They have 50 kinds of mushrooms. We ate three meals a day and each meal was 10-12 dishes and it took the better part of a week before we saw a dish repeated. Nothing the same, but always good. We had enough clout to get two formal dinners with Mayor Zhang of Weishan, which consists of a lot of toasting with rice wine and gifts and the best food.

China changes and changes are challenges. Our first was money. Despite double-checking our budget in January, we still ran over and had to up the program fee. But there was still a gap. We limited faculty salaries and faculty Jingjing Gao worked the locals for every nickel. The trip still came in at 25% less than the other trip to China.

We had the challenge of overnight train rides to Dali, and the nonstop rain once we got to that scenic walled city, center of the Bai minority culture and a must-spot on the backpacker route. It is very nice, but compared to Weishan, quite touristy, with shops dedicated to the foreigners and Chinese who visit. We saw the Three Pagodas, millenia-old pagodas outside town and then, shockingly, a massive $2 billion rebuilt temple that must have included 25 buildings and a hundred gold statues.

I guess that’s the difference between China and America: a country run by businessmen versus a country run by lawyers. We scream when the government offers to give money to a church. Atheist China builds a massive Buddhist temple because it will attract tourists.

Then we were on to Weishan and saw real temples – the old ones that dot Weibaoshan, Taoist masterpieces. Chang Cheun temple is restored but not too much (as is often the case in Asia). They left many of the old paintings alone, which is better than tarting them up like that behemoth in Dali. Mr. Xiao, the monk, again demonstrated flute and tai chi for us on the temple grounds. Thank god his cell phone didn’t ring until he finished the demonstration.

We then spent two days touring the best courtyard houses in Weishan, which is 1300 years old and while some of its temples go back to the Ming era 600 years ago, most of the courtyards were 80 or 90 years old. But they were great. We crawled through them – many occupied by four or more families. Beautiful dragon and phoenix-headed brackets, reflecting walls decorated with stunning paintings, and all of those features we learned to love as chi’h-wei, liang, qiuwen and tang wu. Some of the houses were lovingly restored, some were decrepit but stunning. We measured and drew and described and photographed them. It was hard work by all 13 students and the Weishan officials were impressed at the end.

The biggest challenge was typical China Changes. Our hosts asked us to photo document courtyard houses, so we got a field camera. One of our hosts – a real power broker – was preparing a book on Weishan’s courtyard houses and invited us to submit images. He insisted that the images be digital, so we bought three digital cameras. We decided to go ahead with the large format as well, for the learning experience.

Day 2 of the documentation of 16 buildings in Weishan: Our host calls and asks us what film we are shooting and we say digital and he says the digital isn’t good he wants medium format. Turns out he changed his mind in April. Nothing stays the same in China. We know medium format is better – that is what we wanted to use in the first place.

A week later he shows up with a bus for all of the students and buys us all breakfast in Kunming after an all-night train ride. It was wild – giant crocks of chicken soup at scalding temperature – you cook meat and veg and noodles by dropping them in. One of our students does not eat chicken but ate it, reckoning (correctly) that it was a once-in-a-lifetime experience.

So then the faculty go to meet the power broker. We meet in his publisher’s office and see the book layout and the lovely medium format transparencies. Yes, we know that these are better, says Felicity. Always did. Would have done it that way if we weren’t told otherwise. She critiques the book for cramming too many pictures too close together. It was a slightly tense meeting, us feeling twisted for not hearing that the Boss changed his mind, him feeling a little defensive because we clouted him into promising us representation in the book. Felicity is also refusing to give full size images unless he is going to use them, trying to protect the artist/students. China is not Country Number One when it comes to copyright-protection. She later physically protected the students’ large format work as we tried to get it through airport security in Kunming and later in Shanghai.

Another challenge was the beta version of Adobe Lightroom. This software would allow us to organize the images by historic site for the Weishan officials and by category for the book publisher in Kunming. Lightroom ran perfectly in tests but started to chug and choke mid-week as the library expanded to 2000 images. The poor students on the later teams had to deal with an increasingly buggy beta software and an increasingly impatient faculty member (me.) We finally had to give up and spend a sleepless night on the train to Kunming reorganizing the student photos into the categories for the book publisher.

Shanghai marked the more relaxed coda to the trip, but even there nothing stays the same. I was doing my regular tour of the Bund only we couldn’t cross over into Huangpi Park because the government closed it for a meeting of leaders of Central Asian oil nations. Can you imagine? In Chicago we would never close a park for heads of state – only for Toyota executives. The meetings also closed museums and galleries, which was a bummer for many of the students.

Despite the changes, the trip was a success. We had a great Powerpoint (a little delayed by recalcitrant computers) for the Weishan officials and a video from student Ryan (Dong Geun) Oh. We celebrated birthdays, climbed the Great Wall, had Peking Duck and ate sticks and leaves and went to the dressmaker and tailor and perhaps even the bars and everyone had their turn with the gut rot but we saw things no one else does. We crawled over 13 courtyard houses, documenting and measuring and photographing them in the midst of people’s lives. We got to know the place a bit.

We were in Weishan 10 days before we saw a Westerner. Of course, the book and our work will help promote Weishan and perhaps it won’t be so unspoiled in the future. Or maybe they will do the best of both – a true heritage tourism that looks out for the locals first.

I miss Weishan and China, despite all of the twists and turns. Especially at mealtimes. I could kill for a bowl of beef noodles right now. With lots of chili. It isn’t breakfast otherwise.

0 Responses to :
The problem and beauty of China