The Demolition of Malcolm X College 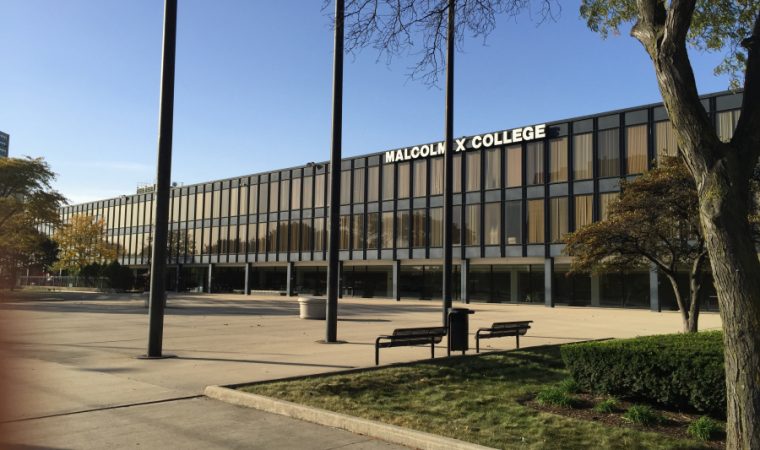 I am barely back in Chicago and another great Modernist masterpiece is going down.  I just reviewed the 372 page RFP for the demolition of Malcolm X College on the Near West Side, a 1971 Miesian design by Gene Summers, and generally considered his best building after his McCormick Place of the same year.  Summers had been Mies van der Rohe’s design assistant on the Neue National Gallery in Berlin.  Here is the beauty of the facade.  I was interviewed by the great Lee Bey on his podcast regarding this.

The college is a perfectly symmetrical composition that extends like a bridge.  Not unlike McCormick Place it is long and lean and low, planned on a 24 by 24 foot module (doubling the 24 by 12 module of the IIT campus) with three levels above grade, an inset glass ground level, a concourse below and two third-floor courtyards. 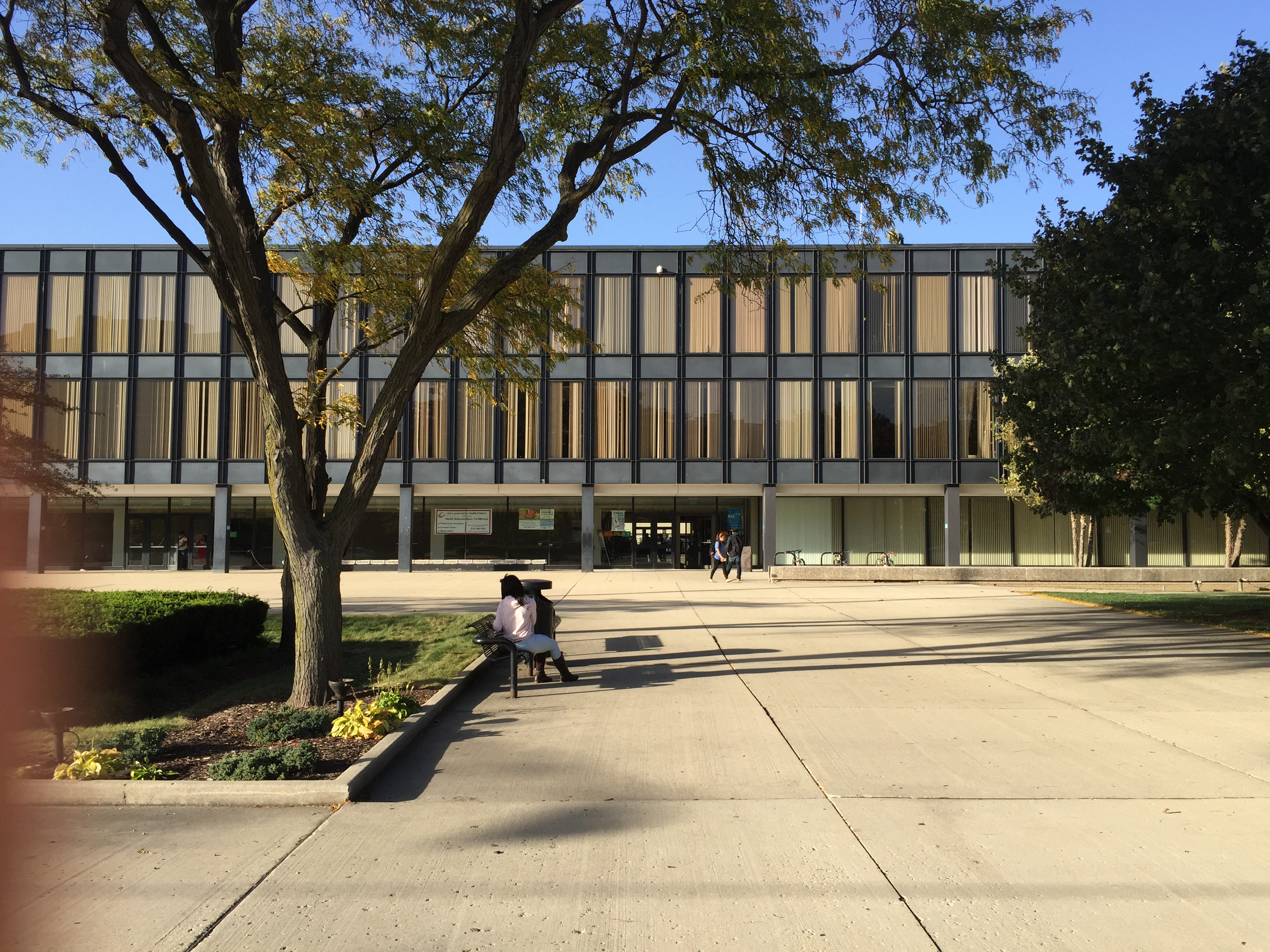 Summers treated the corners much like IIT with a double redentation, and followed Miesian precedent with attached beams in a black color that has not faded in 45 years. 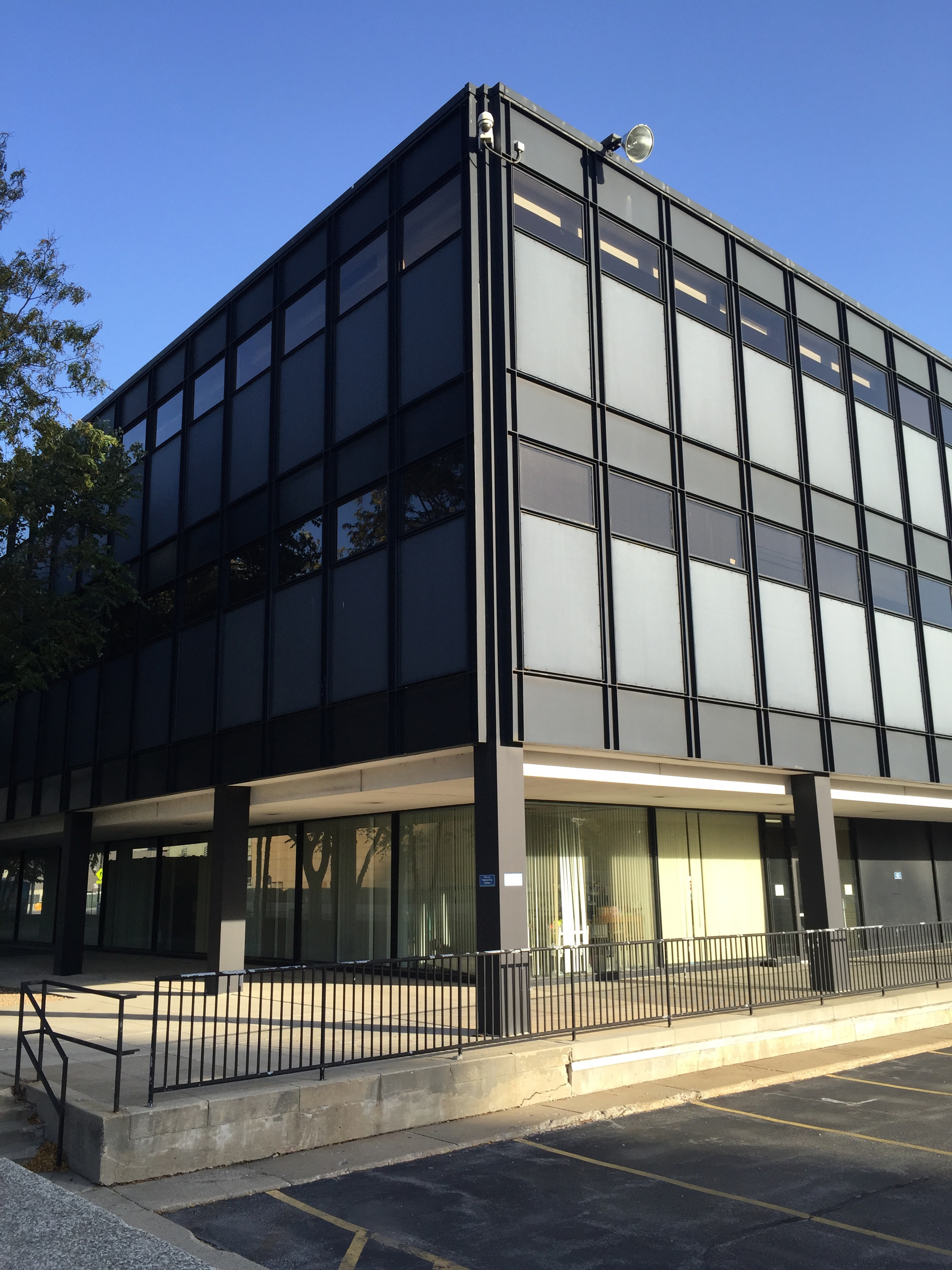 In the 372 page RFP is a 1985 report regarding asbestos, since the building used spray-on asbestos fireproofing for its second and third floor structural elements.  This is interesting and again gives the lie to the idea that asbestos is a reason to demolish a building.  (see my old blog on this subject here.). 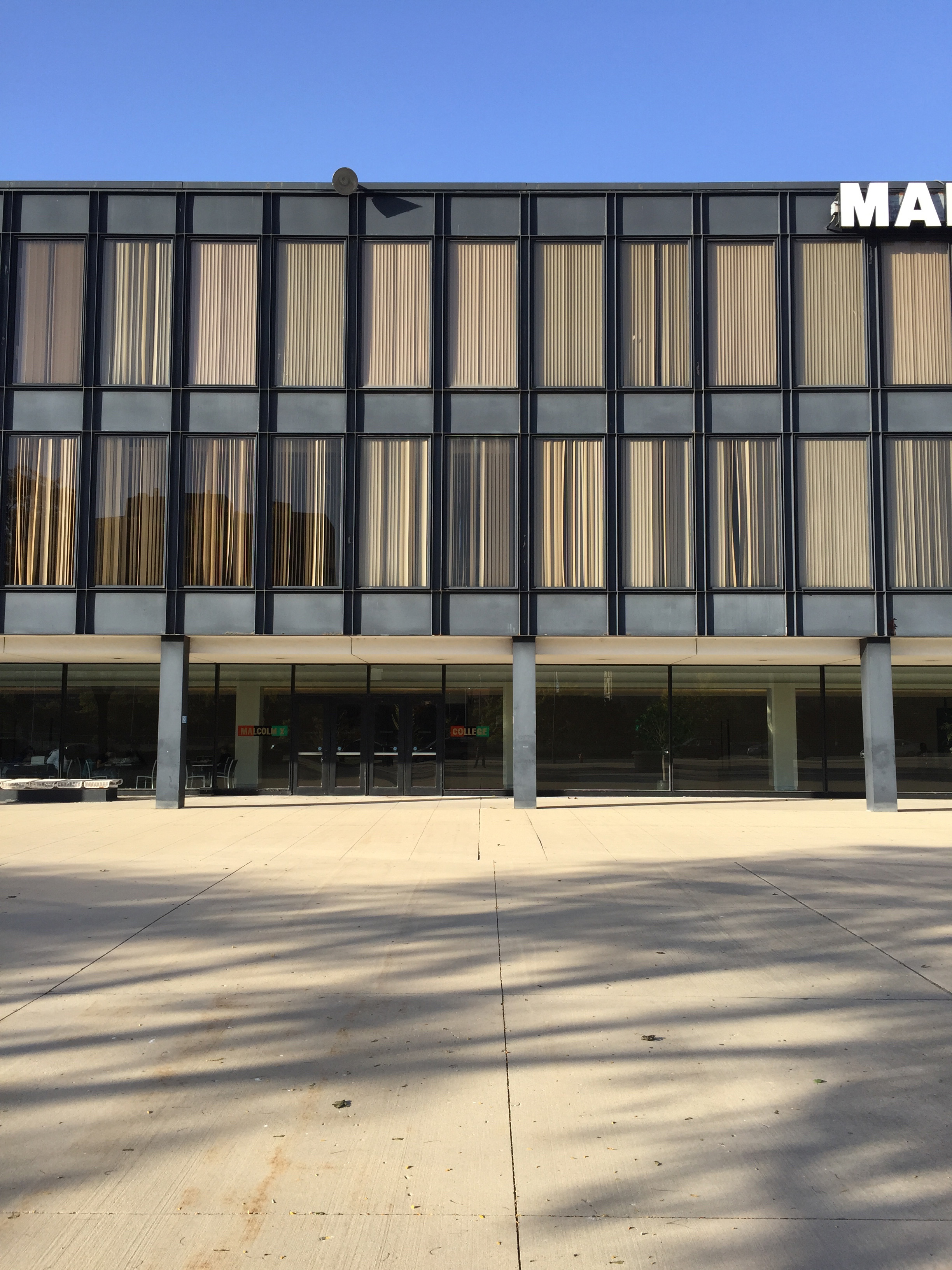 The 1985 report recommended a $7.5 million asbestos abatement which would close the school for a year, to reopen in 1987.  The contract now for the full demolition is $10 million, which is LESS in 1985 dollars.  Amazing.  If you hear anyone using this lame excuse for demolition, remind them that the city had NO trouble allowing 30 years of students and faculty and staff to use the building since they knew of the problem. 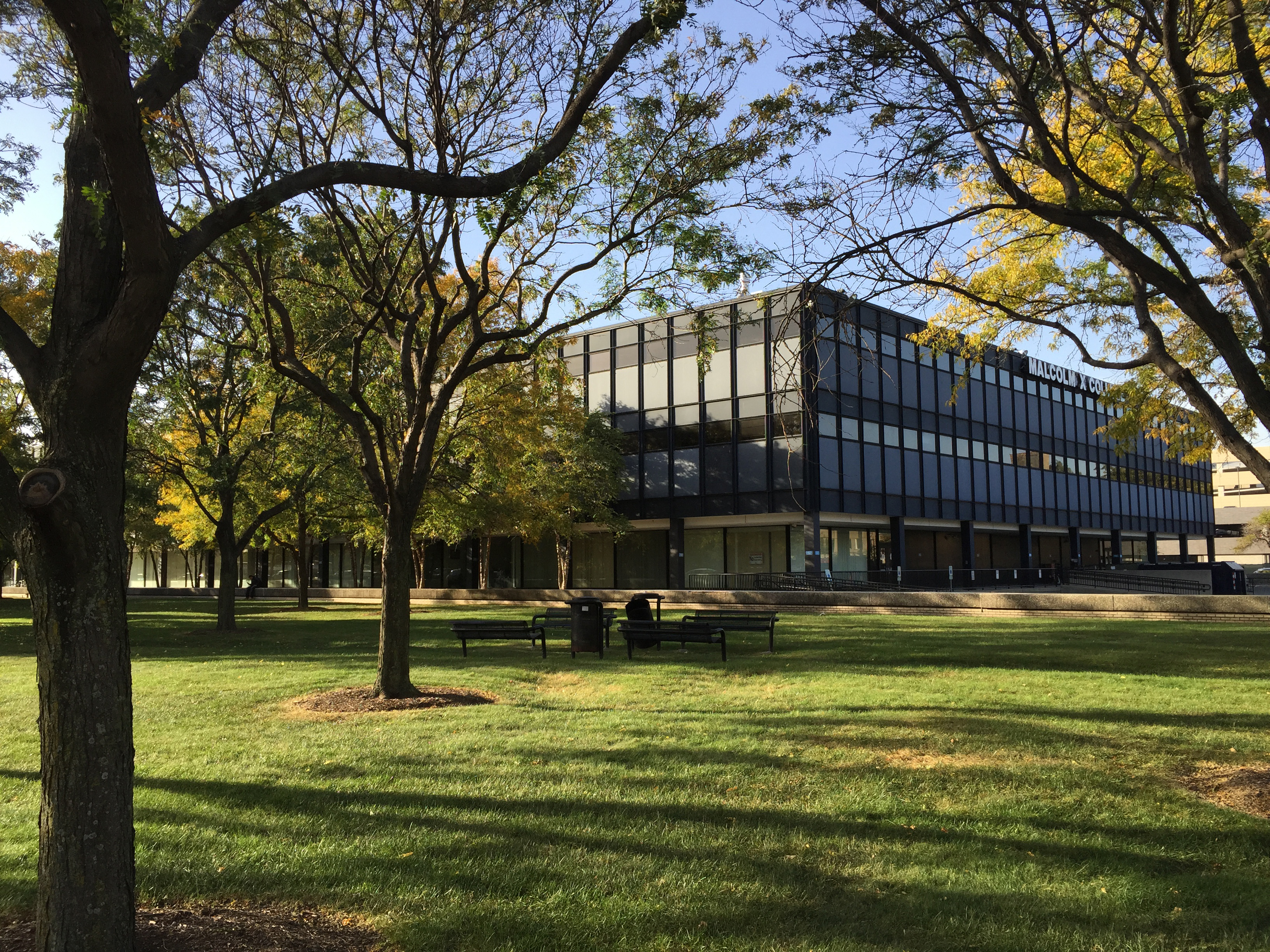 When I visited the building again yesterday I was struck by something we often forget about High Modernism – they actually really cared about landscape.  Four berms frame the ends of the college and partly hide the east and west parking lots.  The trees are mature and in their stunning October color. 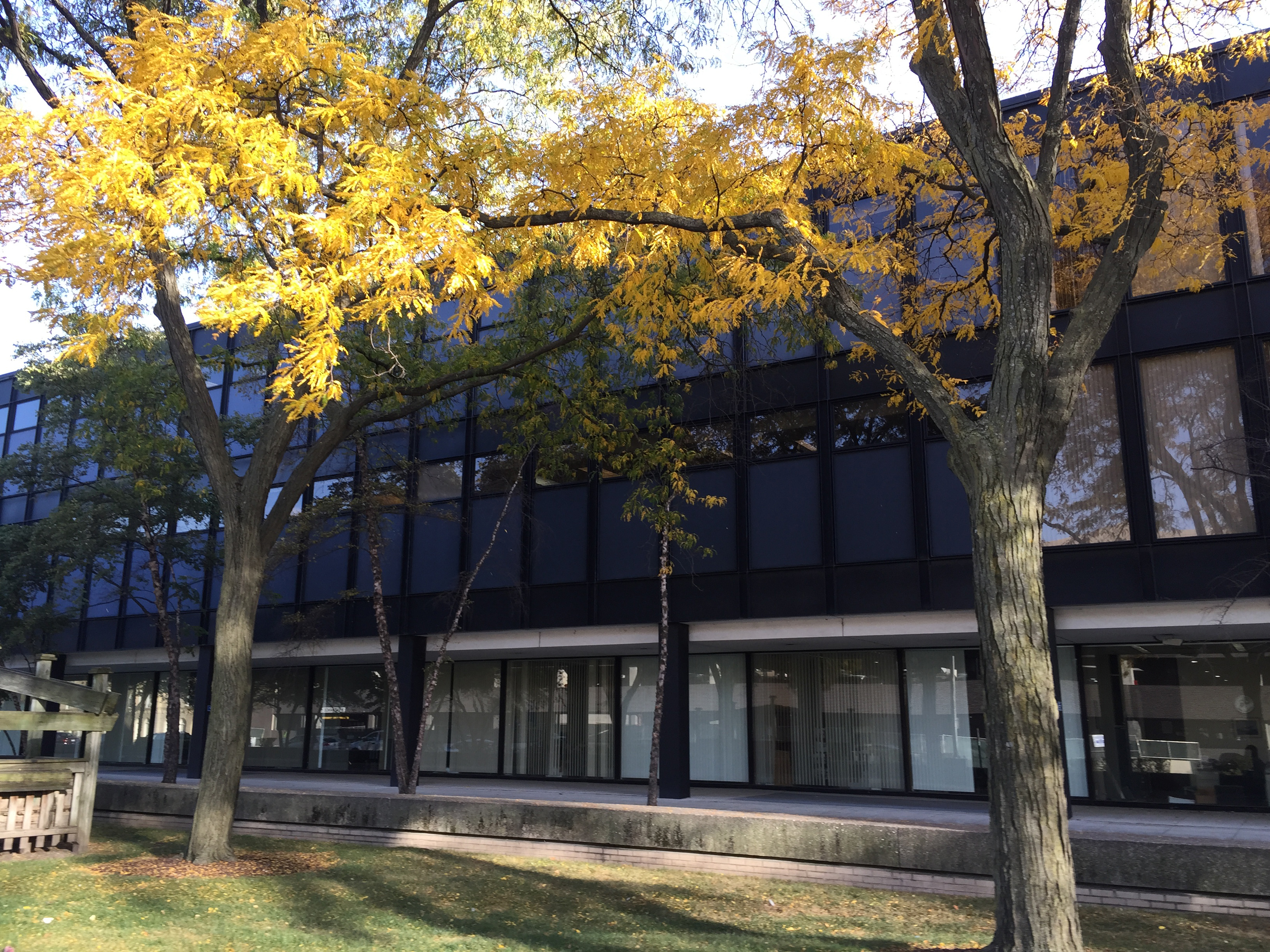 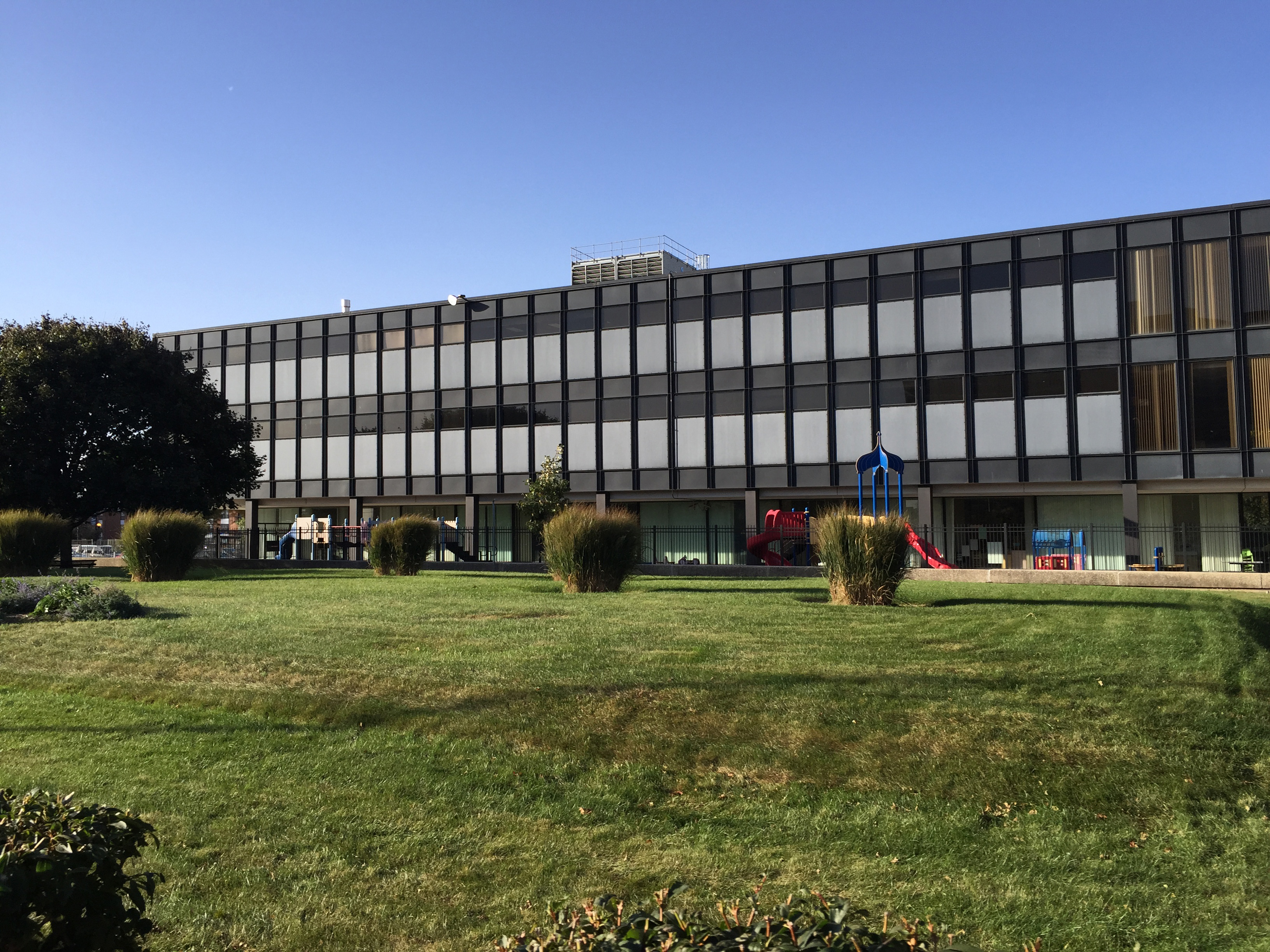 Now this Modernist attention to landscape sits, visibly, in stark contrast to the new Malcolm X College, which is nearing completion across the street. 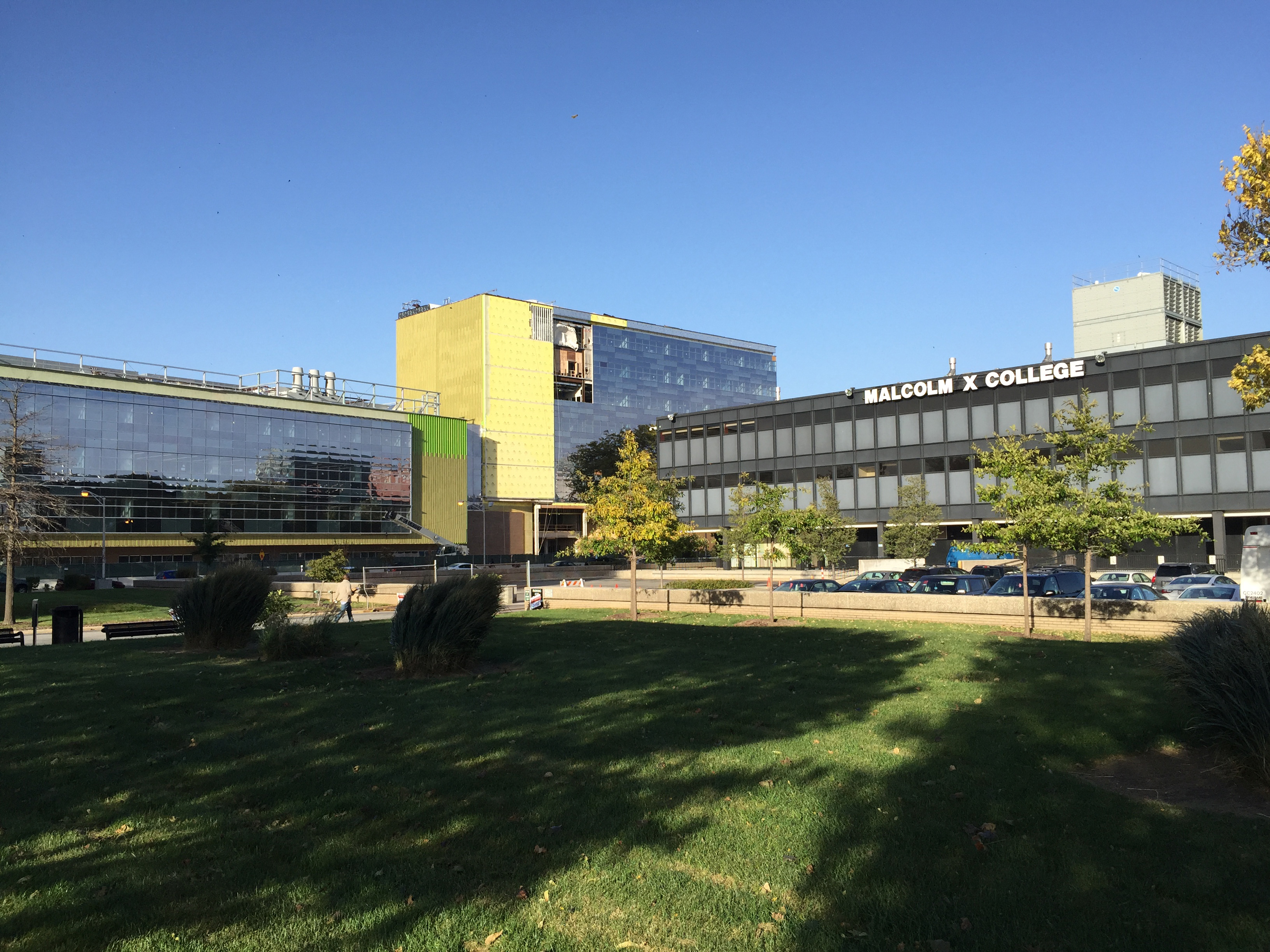 So, we got the usual contemporary design of contrasting shapes and volumes and colors and finishes, which is basically Victorian when you think about it.  But what really irks me is the streetscraping lack of green.  Summers gave us a wonderfully resolved sculpture set in a generous and well-designed garden.  The new college gives us ample access to its massive parking block and plenty of glass facades right up to the lot line.  Uck.

In preparing to be interviewed by Lee about this building, I also took a look at its two contemporaries about a half mile east, Whitney M. Young Magnet High School (also 1971, by Perkins and Will) and the Chicago Police Training and Education Center, which I visited when it was new in 1976 (done by Gerald Butler, the city architect (NOT the Iceman!)).  Whitney Young is a great composition, which some observers preferred to Malcolm X because it better expressed the structural frame. 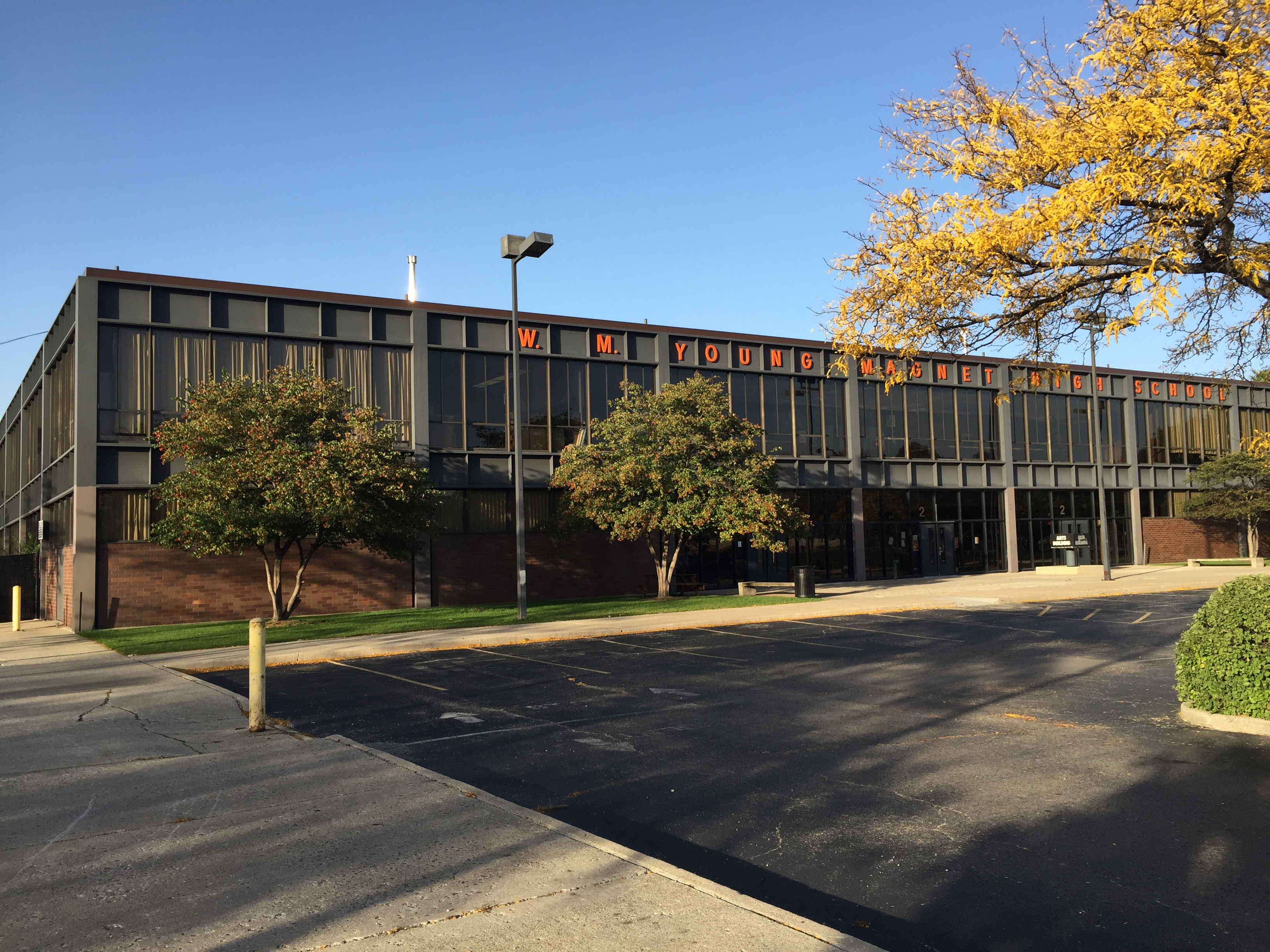 Yeah, okay, but structural expression is always applied anyway (if ya wanna be fireproof!) and I would rate both buildings as excellent examples of High Modernism.  Both buildings achieve unity, continuity and elegance because they pay attention to details and scale – which the many BAD Miesian knockoffs do not.  It is harder to work well in Modernism because there is no room for error when you are limiting your palette of materials and shapes.  Much easier the contemporary Victorian, where a mistake in scale or detail can be reduced by a bravado flourish elsewhere. 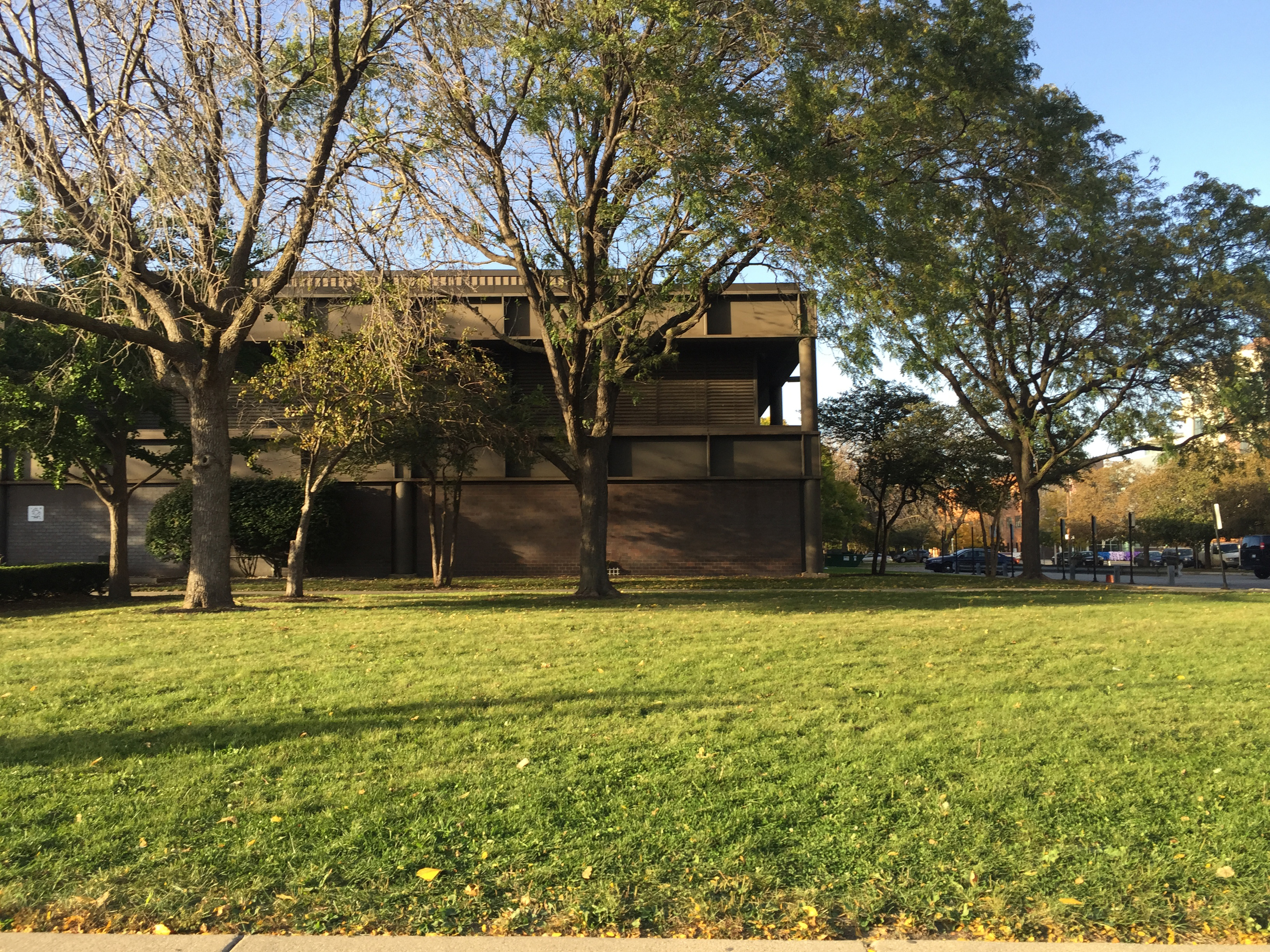 The Police Academy is the weakest of the three, with circular columns and a lot less glass, which makes sense for 1976, especially since at the time they stuck the old Haymarket Statue in the courtyard to prevent it being blown up all the time. 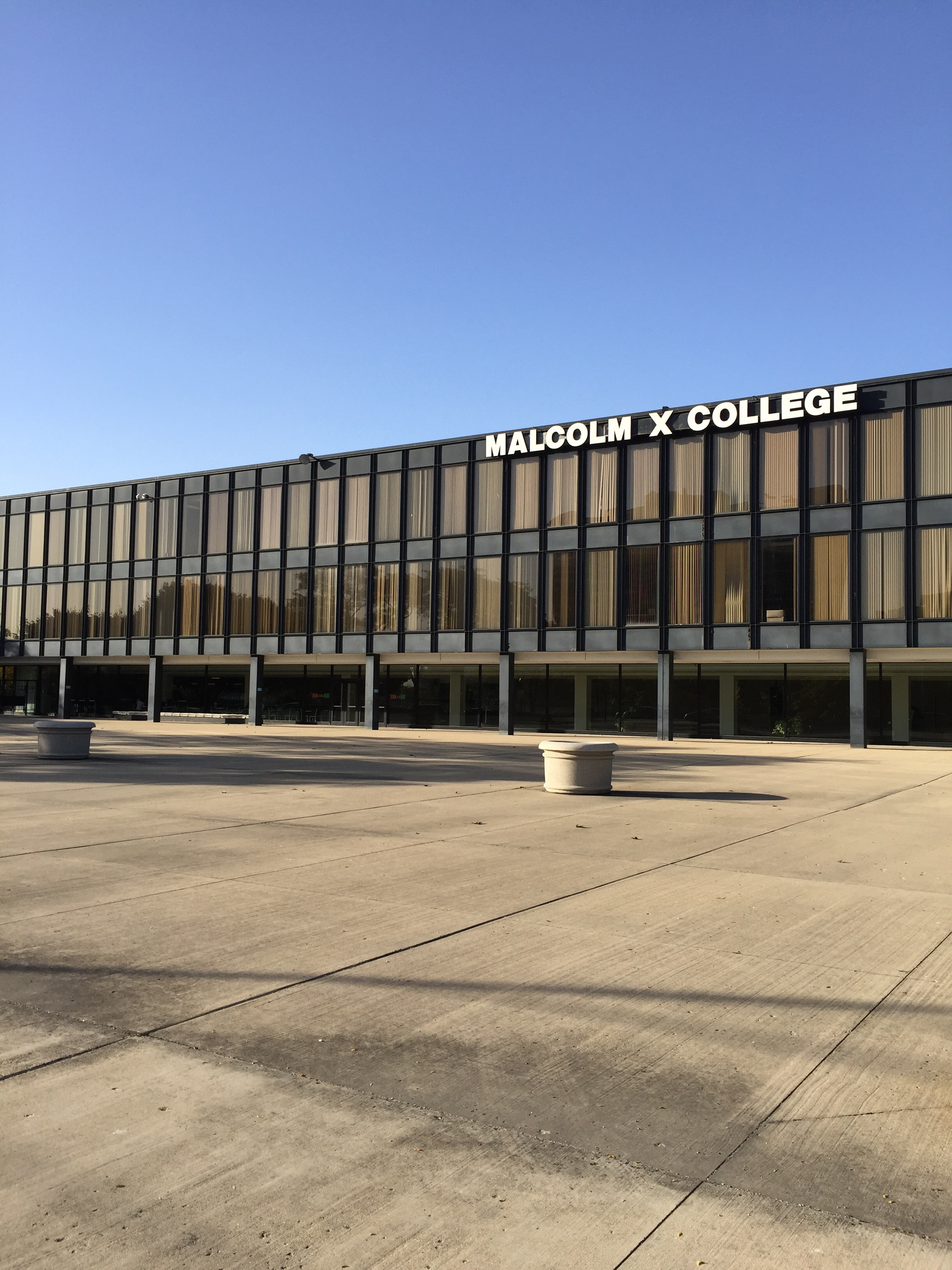 I will miss the iconic Malcolm X College, which is the most visible of the three, located along the Eisenhower Expressway and insistent in its rectilinear resolution, rhythmic resonance and clear continuity.  It will be a loss, not occasioned by the new college, nor by asbestos, but probably by the new Blackhawks training facility being built on its eastern half.  As I recall the Blackhawks were not very good in the 1970s…..

24 HOUR UPDATE:  In the last day we have had a call to demolish Summers’ best building – McCormick Place – as well as Governor Rauner’s call to demolish the Thompson Center (Helmut Jahn 1985).  This is a heck of a way to celebrate the Chicago Architecture Biennale – sort of like when we burned down 3 Louis Sullivan buildings in honor of his 150th birthday.

JANUARY UPDATE:  Well, Lee Bey documented the structure and it turns out the interior is/was SPECTACULAR, like Johnson Publications spectacular.  Go to leebey.com to see the images.

One Response to :
The Demolition of Malcolm X College