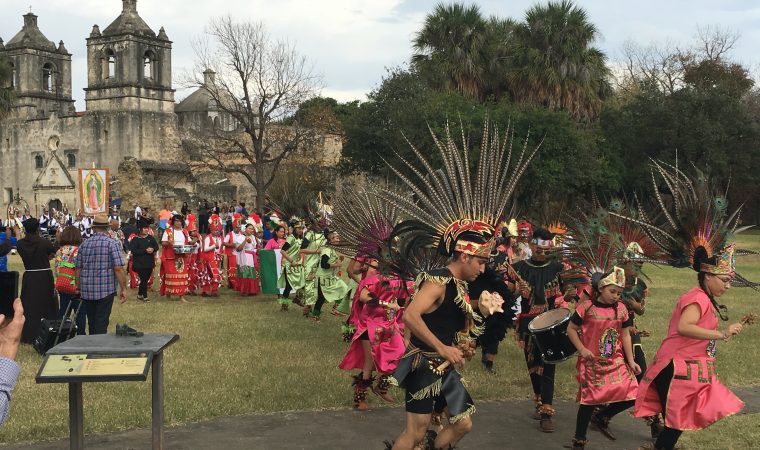 I wrote recently about The Institute of Texan Cultures, a unique museum created in the Texas Pavilion after the 1968 World’s Fair here in San Antonio. The Conservation Society made Page 1 in the local paper with our announcement that we will be listing it on the National Register of Historic Places.

While the focus of the Conservation Society remains on reusing the building itself, the Institute, operated by the University of Texas at San Antonio, has over the years celebrated a diversity that most outside of the state – and many inside it – are unaware of.

For many Texas seems to be quintessential American (“Murican”) culture – pickup trucks, country music, ridiculously large portions, and of course oil fields and ranching. Many are also aware that Texas was Spain for over a hundred years and Mexico for another twenty, so there is an awareness of something called “Tex-Mex” and if you are in San Antonio, Fiesta – a 131-year old event that borrows heavily from Spanish and Mexican culture.

Then there are the Germans. If you came to San Antonio in 1850, Germans were almost a quarter of the population, just behind those of Mexican descent at 30% and well ahead of the American and French at 15% each. Many of the surrounding communities like Castroville, New Braunfels, Fredericksburg and Comfort were settled by Germans and have retained many cultural traditions to this day.

I remember Dominic Pacyga describing the Back of the Yards neighborhood in Chicago where there was spatial integration but social segregation between the many (mostly European) ethnic groups that lived and worked there. In San Antonio, there is a culture of blending. This goes back to its founding as a series of missions designed to convert the indigenous people living here into Spaniards. Founded by syncretism, every major event in San Antonio history centers on the idea of a confluence of cultures, a mestizo blending inherent throughout the Western Hemisphere, but not always as celebrated as it is here.

This is not to paper over a long history of racism and oppression of people of color, that would be foolish. It happened here as it did throughout the state. San Antonio was quicker than other Texas towns to shed the worst trappings of segregation and racial oppression, as the Conservation Society explored in its videos on the 1960 lunch counter Sit-In movement.

When the Riverwalk was designed in 1929 and built a decade later, it’s goal was to capture the spirit of landmark cities along the Mediterranean, and the La Villita reconstruction undertaken at the same time (1939-41) had as its goal the unification of the countries of the Western hemisphere that had thrown off the European yoke, naming its principal places after Simon Bolivar, Benito Juarez and Miguel Hidalgo and promoting historic preservation of La Villita as a way to celebrate this shared heritage.

The Conservation Society’s event A Night In Old San Antonio(R) was created in 1948 and has over a dozen areas each representing part of the city’s cultural heritage, including Spanish, Mexican, African-American, Asian, French, German and even Cowboy.

Some other examples of the syncretic nature of culture in San Antonio include the Alameda Theatre, perhaps the premier Spanish language cinema of the postwar era, developed by an Italian immigrant known for cowboy boots and designed by a Russian Jewish architect.

The mestizo nature of San Antonio continued in the 1960s. The theme of HemisFair ’68 was literally A Confluence of Cultures in the Americas. That’s puro San Antonio. We still have two murals celebrating that.

There are so many other cultures that have become part of San Antonio it is dizzying. We have the largest Martin Luther King Day march in the country and the largest Diwali celebration. Don’t even get us started on Dia de los Muertos.